Ten years ago Turn 10 Studios teamed up with Microsoft to bring us Forza Motorsport. A franchise that would spawn 7 games throughout the next decade leading up to Forza Motorsport 6. I would like to preface this review by saying this is the first Forza game I’ve played since Forza Motorsport 3. That being said, comparing Forza 3 and Forza 6 are very different games with different mechanics that I will go into deeper below.

For their 10th anniversary, Forza returns with more cars than ever before. With over 420 cars at launch, Forza 6 offers players a widespread roster of vehicles spanning many time periods, classes, and manufacturers. This goes without saying (but I’m going to say it anyway), the graphics in Forza 6 are simply outstanding. The sun reflecting off the cars, the wheels spinning, and the interior of the cars, all of this can easily mistake the game for a televised race. The first race in the game literally left me awestruck. The background environments are so detailed and lifelike I stopped paying attention to the race and just stared at the background for a bit. . Racing at night has its own wonders. Whether you’re in the pitch black night seeing only by your headlights, or you’re racing an artificially lit speedway, racing at night is definitely an improvement. This game has the best water physics out of all the games I’ve played, sadly it has better water physics than some movies I’ve seen. Doing wet laps is noticeably different than dry laps as it should be. Driving a wheel through a puddle not only gives a realistic splash, it also affects the pace and direction of your car. While driving first person in the rain, the water hitting your windshield reacts to the way you turn and also to your wipers. Interacting with the environment is definitely a huge plus. Crashing into the barriers resulting in the tires flying away or running over pylons and seeing them flip away is a highlight of any race. Forza 6’s audio is something that should definitely be experienced with a good pair of headphones, that being said the audio is still quality without them. The amazing sounds are shown off whenever they can be, going under bridges or through tunnels. Fans of Top Gear will also appreciate the voice work provided by Richard Hammond and James May as it makes the game feel like an episode of the beloved show. Lastly, I found the AI to be a lot less, for the lack of a better word, perfect than previous games. In Forza 3 for example, opponents rarely crashed, skidded, or went off track. This is not the case for Forza 6 as your opponents will do these things, which gives you the feeling of racing with real competitors. On to what’s not perfect about this game. The live action cut scenes are a big no-no in video games (for me at least). The live action bit at the start made me feel like I was watching a car advert as opposed to waiting for my game to begin. The forced deceleration at busy corners frustrated me immensely. If I want to fly into a corner at 120 mph I should be able to. Unfortunately, the game doesn’t want me to, thus I’m slowed to a pathetic 15 mph at times. With hours of gameplay, beautiful visuals, and audio, and sheer amounts of fun there is really no reason for me not to recommend this game. It IS a triple-A release so it is going to run you about $80 but based on gameplay alone it’s definitely worth it. I recommend playing with headphones with good bass, trust me, makes a world of difference.

A copy of the title was provided by Microsoft for review purposes. 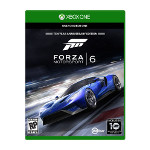 One Upon Light Gets October Release Date