Forza has returned with the biggest open world racing game yet, or in other words, Forza Horizon 3. Forza Horizon 3 take place on the largest open-world map in any Forza game, set in the stunning outbacks of Australia. In the game, you the player are tasked to help create and put on successful festivals all over the map and gain fans by completing publicity stunts and, of course, racing! Has this game got enough under it’s hood to make it the best Forza game so far? We’ll see.

I had an incredibly fun time playing this game. While driving across the Australian landscapes I couldn’t help but to marvel at the breathtaking visuals this game had to offer. Everything from the general scenery to the light as it bounces off your car as you’re speeding down the path to the water, whether you slosh through a puddle or watch as the rain droplets move with your wiper blades, everything looks stunning (well almost everything, I’ll get to that a bit later).

The sound in this game is as great as it is loud. Really hearing your engine roar truly does add a lot to the racing experience. Speaking of sound, Forza Horizon 3 has introduced Microsoft Groove integration and it does wonders for those long drives across the beautiful Australian outback. Also, the music is totally in-game, meaning that as you drive into one of your festival locations the music will smoothly transition from your car speakers to the Festival loud speakers making it feel like you’ve just driven into a loud, booming concert.

There is an impressive roster of about 350 cars in Forza Horizon 3, but what’s even more impressive is that every single one of them is customizable. From the obvious paint job customizability to tires, license plates, body kits, rims, horns, blowers, the list goes on. But the customizing does not stop there, not by a long shot. Say you’re in a race, but it’s kinda boring and you’re not having that much fun. No problem, just customize the race! That’s right, the races in Forza Horizon 3 are fully customizable. If you don’t feel up to the task of creating a race yourself that’s ok too, as you can play races made by your friends or other members of the Forza community. That is pretty cool.

If you’ve played all the other racing games and are looking for something hardcore and really testing of your racing ability, then this may not be the game for you. There’s not penalization whenever you lose a race or anything along the lines of that so you never feel like you’ve truly failed. Now that may sound like a good thing, but when you’re looking to enhance your skill you need to be tested. The game is too relaxed.

Following up with comments I made on the visual aspect of the game, while they are beautiful, there is one thing that just felt off to me, the rear view mirror/camera inside the vehicle. If you look back behind you while racing everything looks fine, great even. But the minute you look in the rearview mirror/camera things get a little silly. The graphics shown on the mirror or the camera look like they’ve been taken out of a PS1 game or even a cheap online flash game. Everything’s polygonal and blocky and there’s no shading, everything looks flat.

Finally, the dialogue. While I get that Forza rarely dabbles in putting casual dialogue in their games (the exceptions being the Horizon series), the dialogue in Forza Horizon 3 needs some work. At times the dialogue can get very cringy and sometimes it seems way too forced. While the addition of being able to choose your name and the NPC’s actually refer to you by name (think Fallout 4) is cool, a lot of the stuff following your name just seems unnatural. Think of one of your parents trying to act cool around your friends, that’s 60% of the dialogue.

That all being said, did I like this game? Hell yeah! It’s the most fun I’ve ever had playing a racing game and I expect to put even more time into than the last Forza game I binged (which was at least 100 hours). It has it’s faults sure, what game doesn’t, but we don’t pick up a racing game expecting it to have a thoughtful narrative, or gripping dialogue, or even amazing graphics. We play racing games to race, and Forza Horizon 3 get’s racing down to a tee. It’s fun, it’s immersive, it’s creative, it’s beautiful, it’s easy to spend your entire day playing it. If you’re a fan of Forza pick up this game, if you’re a fan of open world racing or racing in general pick up this game, if you’re a hardcore racer who needs a real challenge this game might not be for you but pick it up anyways, I can guarantee you’ll have fun.

Forza Horizon 3 is out now exclusively for the Xbox One and Windows PC and is one of the first games to join the line of Xbox Play Anywhere game’s meaning you can start it on your Xbox and then continue the same game, same saves on your Windows 10 PC wherever you are. Pretty sweet. 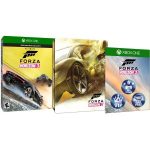