The rush through the rust lumber mill tested all the mettle that the first Arbiter had. She needed to learn how to control her dash to reach the grand hall in the centre of the factory, where upon opening the door, she found a malfunctioning wood-cutter drone ready to chop her to bits with its buzz saw hands. Her mission was of too much importance to be cut down.

That’s just a snippet of the adventures that await you in the London, Ontario produced Foregone from Big Blue Bubble. And while it plays out as a passionate love letter to the Metroidvanias and roguelikes that have led games since time in memoriam, it’s one that I can’t help but find a little forgettable.

Foregone excels in its boss fights, challenges and its fluid controls. And yet, its repetitive enemy and platform types paired with a sparse and underwhelming story makes Foregone a premium-priced platformer that isn’t anything special, but it’s far from a bad game.

Foregone is a story told in short remarks

The whole story at play in Foregone is a tad threadbare. A short-opening cutscene proclaims that the city of Calagan has prospered as a city of science and technology. It introduces you to your player character, the first of the Arbiters, a possibly genetically-modified super-soldier tasked with protecting the mysterious Project Hera. In the first few minutes of the game, you’ll realize that a great calamity called the Harrowing is set to befall Calagan as an enemy force moves in to occupy the city.

It’s your standard fair sci-fi story where the lone wolf saves all adventure that promises a compelling story of conspiracy and regret delivered in a five-to-ten-hour package depending on your grind, which I’ll get to shortly. 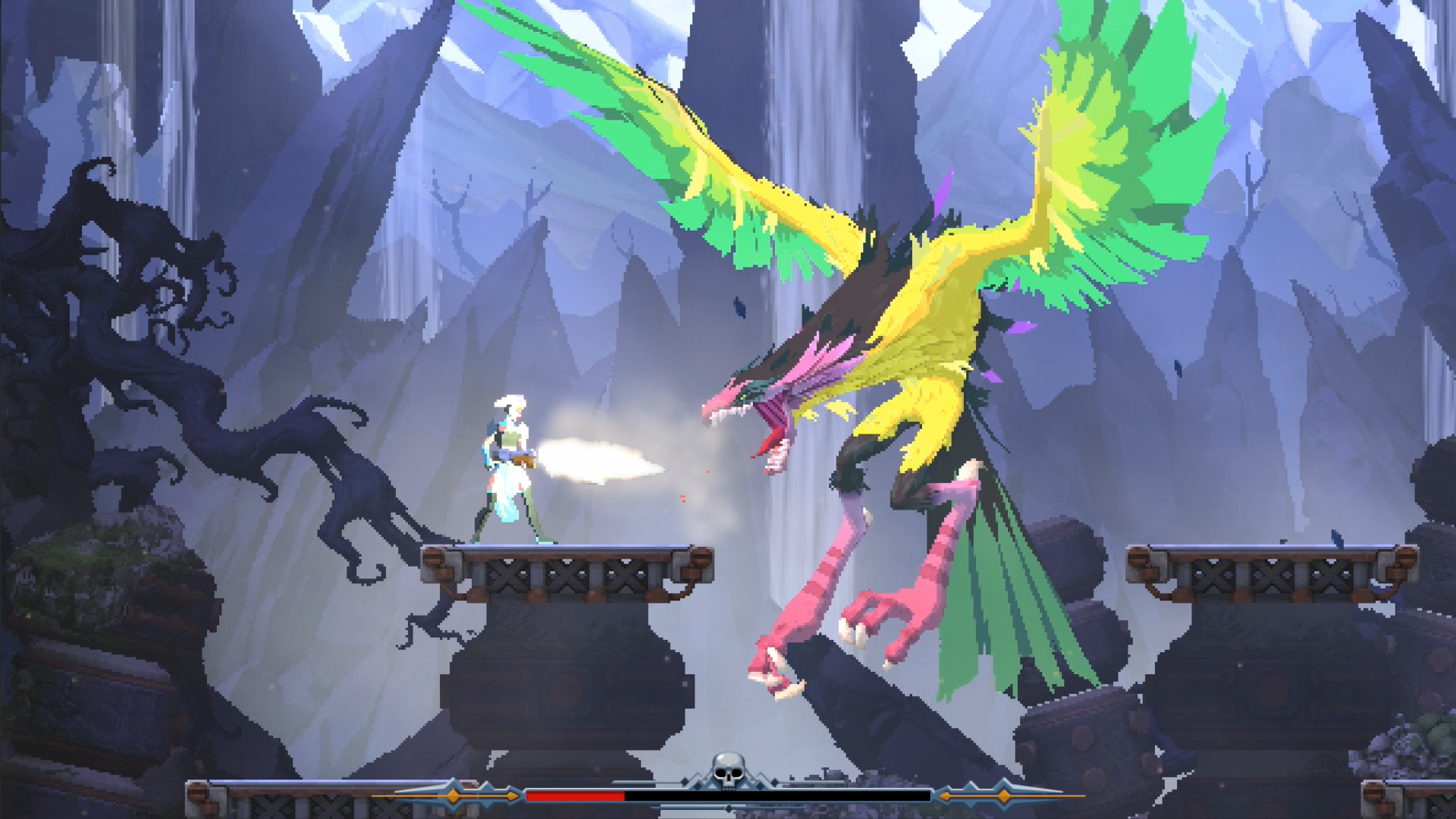 Most of my problems with the way Foregone delivers its story have to do with the amount of time you’ll go without any sort of interaction with the story. the first Arbiter’s adventure is a lonely one as almost all of the interacting she does is with level enemies, bosses and the civilians found in the Outpost. The story is told in fully-voiced quips The first Arbiter will speak aloud as well as several text entries found dotting the maps and secret areas.

While this is often a staple of storytelling in Metroidvanias and roguelikes, I feel that it needs to be done with something to finesse its delivery. I wasn’t asking Foregone for 20-minute Kojima mini-movies. No, all I wanted is for a character like Hornet from Hollow Knight to appear and entice me into continuing through Foregone’s rather linear maps. Sadly, the closest Foregone delivers to this idea of having characters who advance the story is certain stronger enemies that need to be slain to open doors and continue progress. They aren’t really mini-bosses, and they are far from fulfilling in terms of narrative. In fact, they aren’t even that much stronger than your standard enemy, so this is a bit of missed potential both story and gameplay-wise. 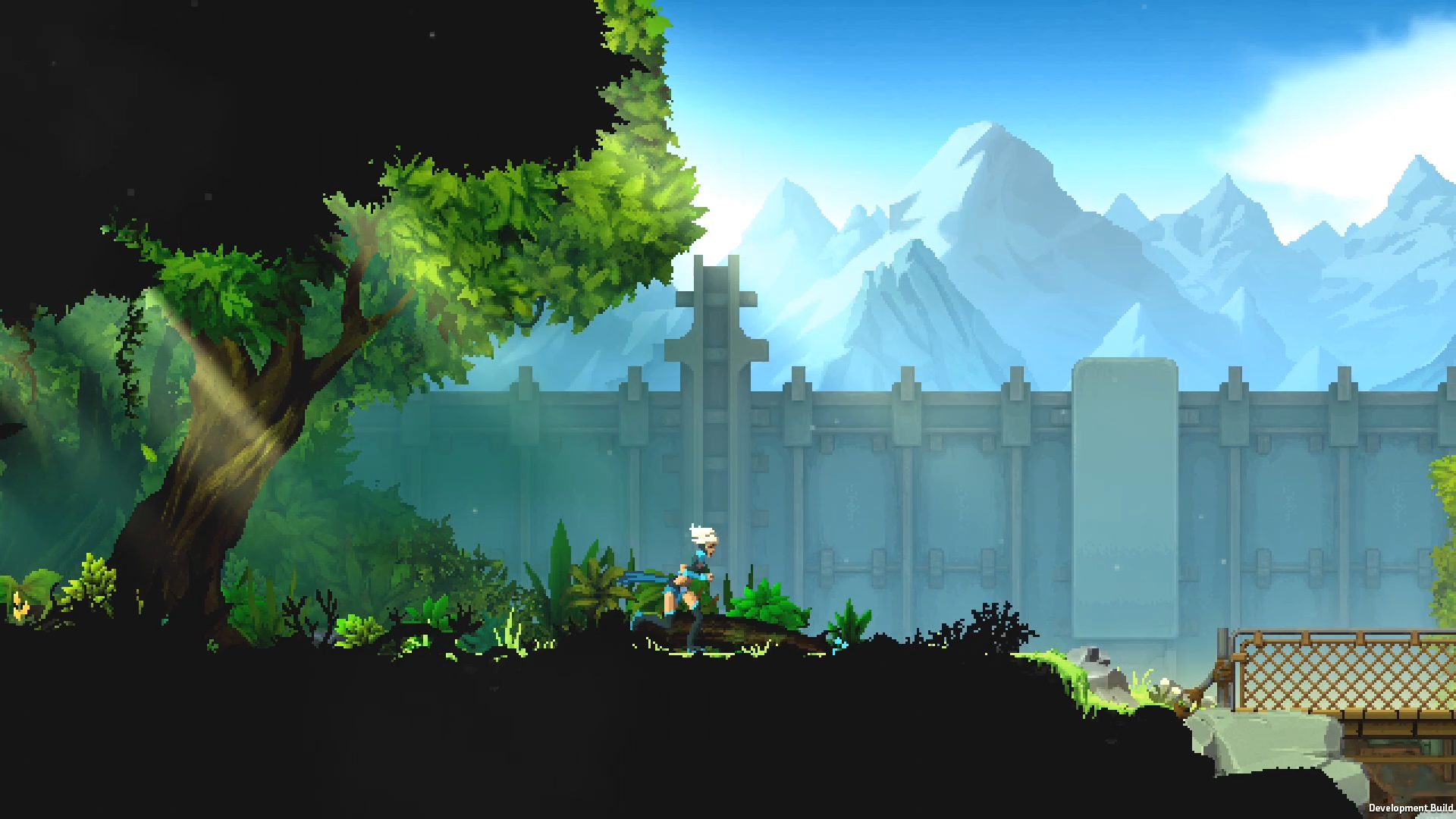 Am I averse to adventure?

This is a question I found myself asking over and over during my time with Foregone. Big Blue Bubble clearly wants you to extend your time in Calagan by investing in a handful of subsystems that require quite a grind.

There first of these is the loot and skill system. Both of these are robust enough to remain interesting as they allow you to customize your Arbiter to suit your play style with several ways to make the most of your sword, gun or gunchucks, which are exactly what they sound like they are! However, my problem is that progression in both systems requires a large investment in farming as skills cost you a currency dropped by enemies and equipment farming is seemingly incredibly random. 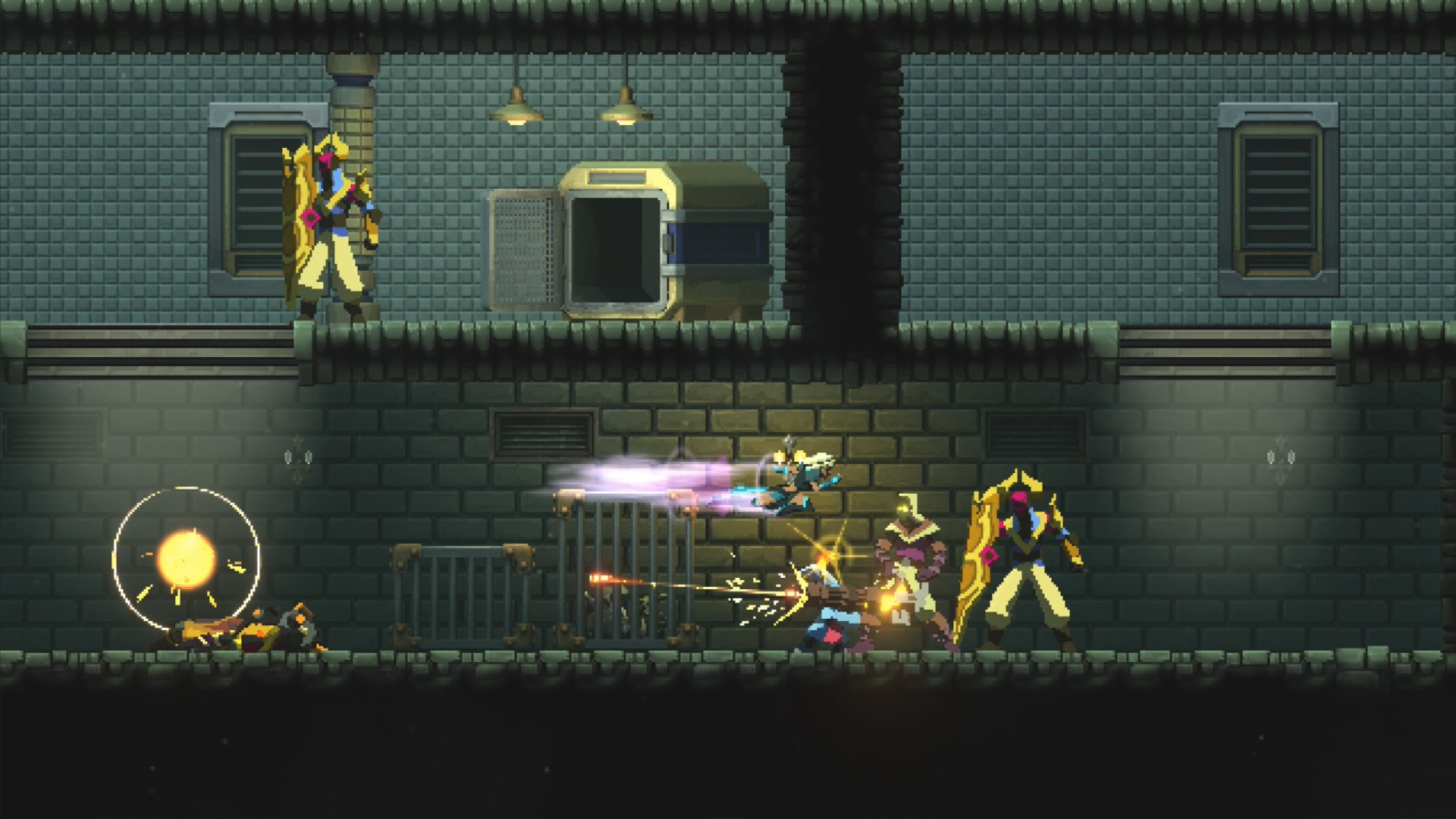 Second is an optional mission system found in the Outpost, town-like cropping of buildings that serves as your home base. Missions open up as you progress through the main maps and take on timed challenges where you speedrun to defeat a set amount of enemies. From the get-go, you’ll be woefully underpowered to meet the challenge. But if you are willing to sit through hours of grind, you’ll find that they offer you a new challenge that adheres to Foregone’s theme of being great for some but not for everyone. They certainly aren’t for me.

Where Foregone sheds most of its comparison to Dead Cells and its other influences is in its art. Calagan is a wonderfully bright and grand landscape with just a slight patina of rust playing witness to its fall.

With its sullen beauty out of the way, Calagan faces a sort of crisis of identity when it comes to the elements of platforming and exploration. Along your journey of navigating linear hallways and platforms, you’ll find that the few enemy-type reskins offer a very simplistic and redundant challenge that you’ll either be equipped for or not. Backtracking, completing optional missions and upgrading the first Arbiter will allow you to not only push forwards but also find places you couldn’t reach before. But even then, there’s really only the handful of secrets hide in each stage waiting for you to newly discover. These secrets may offer you a better weapon or some text to make sense of the story but the joy of them is largely present only to keep you slashing and shooting.

It’s all about the slide

Let’s talk mechanics and performance. Foregone promises fast and fluid platforming action, and for the most part, I’d say it delivers on that. There’s a satisfying heft to sliding into a row of beetle-like enemies and slowly slashing the lot of them to death.  Staying true to the style of game it is, Foregone banks its mechanics heavily on you learning when locked animations happen. You’ll quickly learn the ropes when it comes to level enemies, so forward momentum stays pretty fast. And the greater animation variation of bosses is part of what makes them the most enjoyable part of this experience. 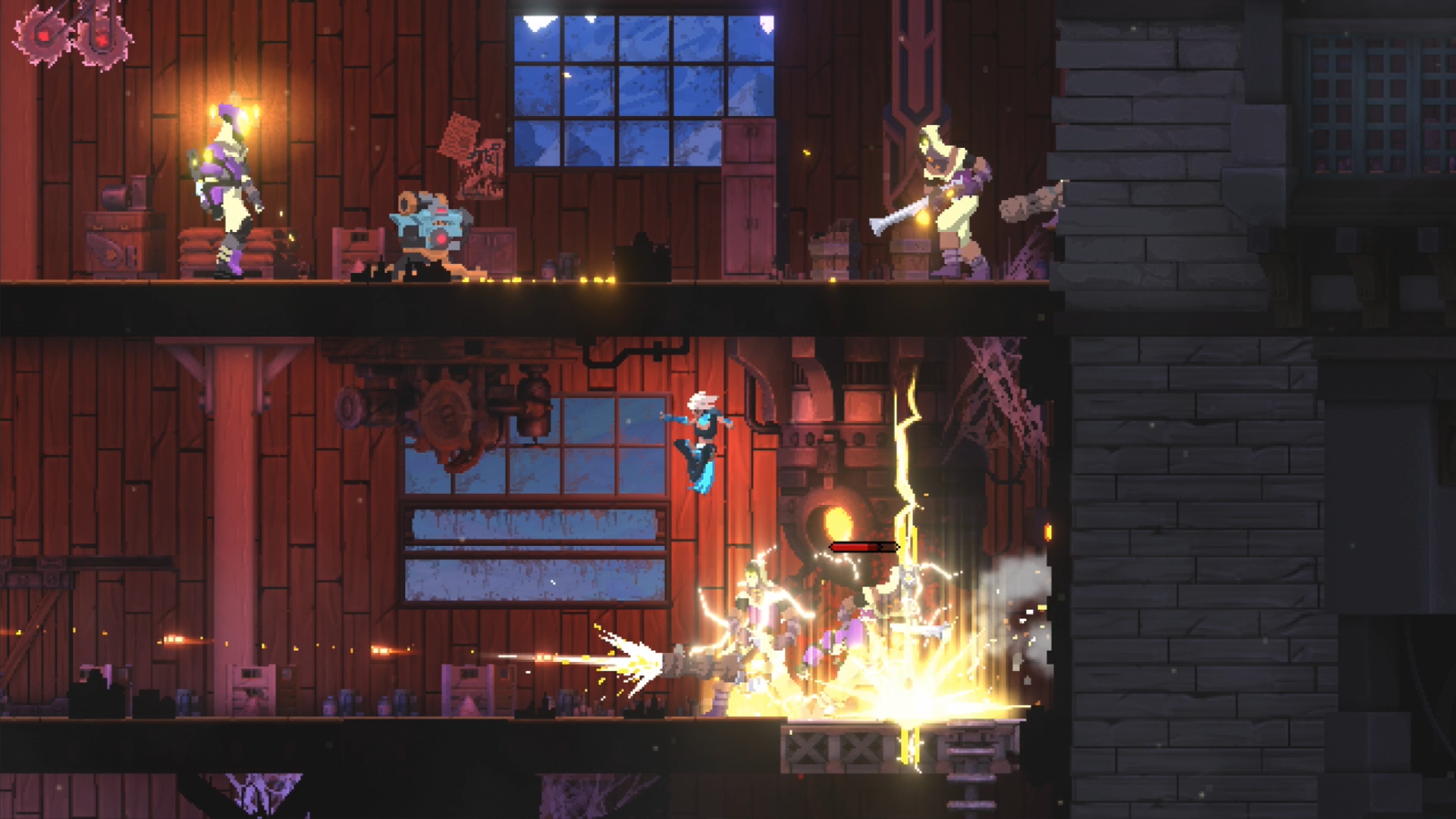 Performance-wise, I did experience some rather extreme graphical stutters where the game would drop from 60 FPS to around 45 FPS in levels where there were more enemy assets to load up. I’ve seen issues like this commented on in a few places, but I am also ready to attribute this to the fact that I am currently stuck playing on a five-year-old Acer Nitro 5 laptop in  3440 by 1440. I am pretty sure this computer never imagined it would be forced to game at this resolution, let alone game at all!

In my opinion, Foregone is going to be one of those divisive games that are destined to become a little bit of a forgotten gem. There is quite a bit to love about this game if you are a die-hard Metroidvania fan. but not at the current price, it’s a lot of money for a game that doesn’t offer much of anything new or compelling to the mix. Calagan is a bright and compelling city that is full of bland enemies. Perhaps that’s a great allegory for my feelings on this game. Every time I thought Foregone had something to stake its claim on, it ended up falling short.