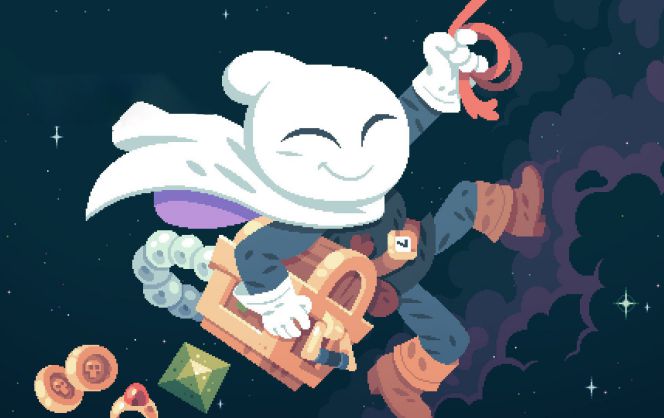 Indie developer Tribute Games have already published five titles, including Mercenary Kings. But it’s sixth gaming title is its best effort to date by far. For some sections of the modern gaming community, Flinthook could be a frontrunner for the most enjoyable release of 2017.

Flinthook is an action platformer with a distinctly retro vibe. The retro gaming arena has enjoyed a huge surge in popularity in recent times. The possibility of a mini-Snes only further highlights those feelings to perfection. Celebrating the glory of the old days is on trend. But there is a clear lack of titles that embrace those attractive features while providing a modern twist. This release might be the perfect title to plug that gap.

The 2D appearance of Flinthook is faultless and merges the simple joys of old school gaming with the sharp graphics of the new generation. One thing to love about the level designs, though, is that they are randomly generated from the stored inventories. As such, every game of this platformer is unique, enabling the fun to last for far longer.

However, that wouldn’t be possible if the game mechanics weren’t fun in the first place. The basic premise of the game is that you are a space pirate. You are equipped with guns and cool weapons but move through the game using a hook that also doubles up as a weapon. You can gain a deeper insight at https://www.youtube.com/watch?v=gUll13C9NQI. It’s a platformer that can be made to sound quite complex. Essentially, though, it’s a title that can be picked up and enjoyed by gamers of all abilities. This in itself is one of those iconic memories of the 1990s era.

Flinthook employs some of the classic ideas from this genre, such as collecting coins and power-ups. However, the collection of XP to unlock permanent upgrades is something best used by some of today’s great online multiplayer games. Every aspect of the game feels like it is meant to bring a modern look to retro gaming to the masses, and it does so extremely well.

The soundtrack is particularly pleasing to the ears of older gamers and will take you back to those simpler times. Quite frankly, though, a modern soundtrack just simply wouldn’t work. It’s certainly a title that will inspire indie game developers, especially when it comes to getting the music right. Any enthusiasts should visit https://www.melodyloops.com/music-for/games/ for royalty free music for their projects. As Flinthook shows, it could make a world of difference.

On the face of it, Flinthook primarily uses tried and tested ideas but with a sense of creativity that is often lacking. Does it do anything that will blow your mind? Probably not. However, the Canadian developers have clearly put time and love into making this release fun. And ‘fun’ is the first word that springs to mind when playing this title. We often forget that enjoyment is the primary function of any game. For that reason alone, this independent release deserves every accolade it receives.

Flinthook is available on PS4, Xbox One, and Windows as download content. A short run of physical copies is also available on the Sony platform.

This review was written by a guest reviewer.