We’re on the tail end of 2021 the Metroidvania genre is showing no signs of slowing down. In recent years, the number of video games that have decidedly gone with expansive areas packed with explorable secrets and action-based combat has ballooned. How do you begin to differentiate these games when so many have crucial pieces of feelings so similar? In the case of F.I.S.T.: Forged In Shadow Torch, it’s done by the luscious visuals, engaging cast and refined gameplay.

Ti Games, a Chinese developer who has been mentioned several times thanks to PlayStation China Hero Project, delivers a wonderful and exciting Metroidvania that’s set to launch this week. It’s also the studio’s first game and is published by BiliBili.

Rabbit with an Iron Fist

In F.I.S.T.: Forged In Shadow Torch, you play as a rabbit named Rayton against the backdrop of Torch City, a dystopian city filled with anthropomorphic animals. Years before the game begins, the Legion invaded, destroying the inhabitants, and effectively taking over the city. Rayton is part of the failed resistance and after fighting for the city and losing, has found himself relegated to surviving his harsh new reality. 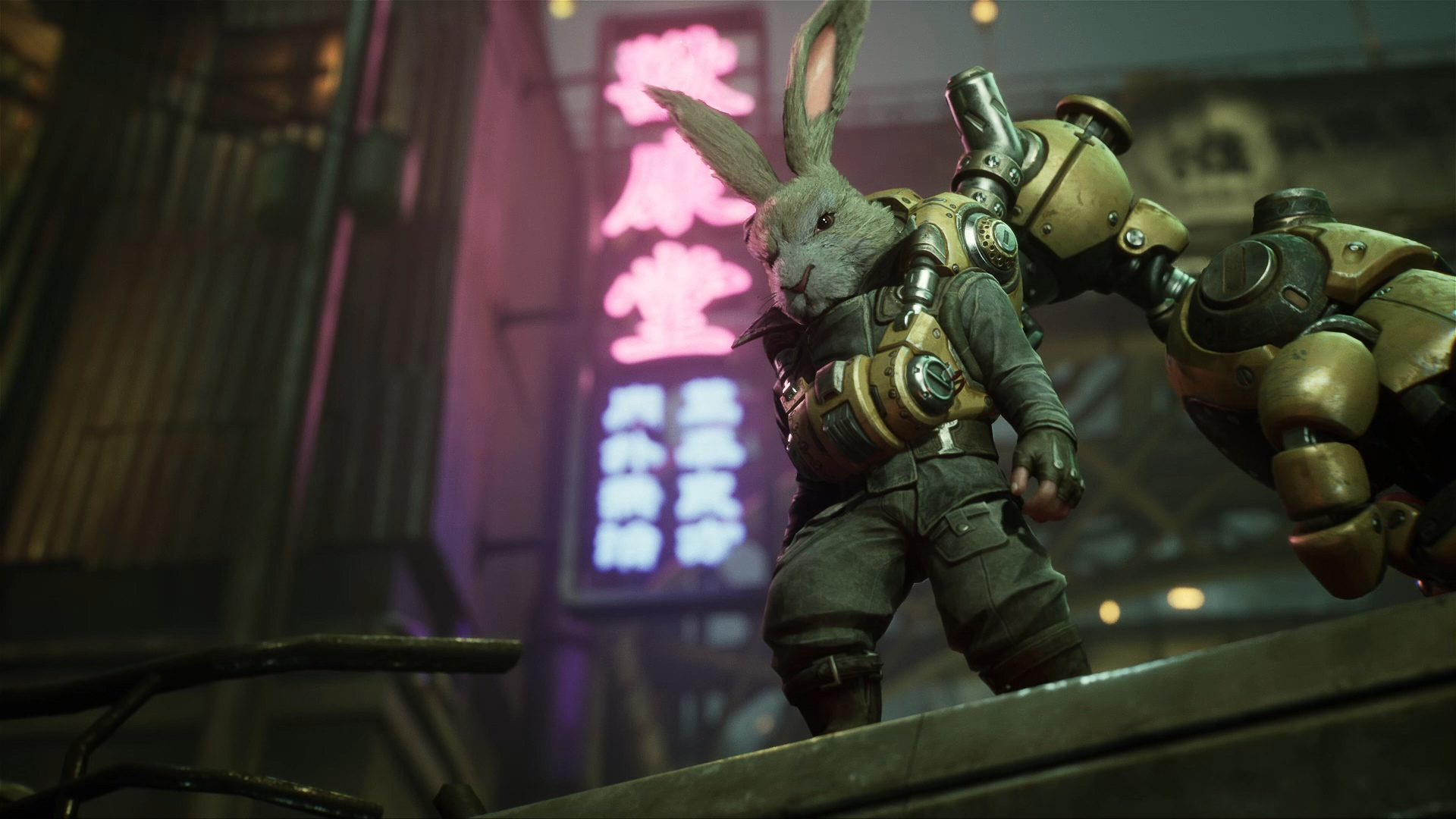 What I found special about the story is how well it is told. In particular, the pacing is something I find a lot of games struggle with but F.I.S.T.: Forged In Shadow Torch has a solid flow that pushes you forward successfully. Given the game does have instances of awkward dialogue at times, the main story isn’t the issue and even if the tale happens to be by the numbers, all is forgiven because of how much fun exploring Torch City is. 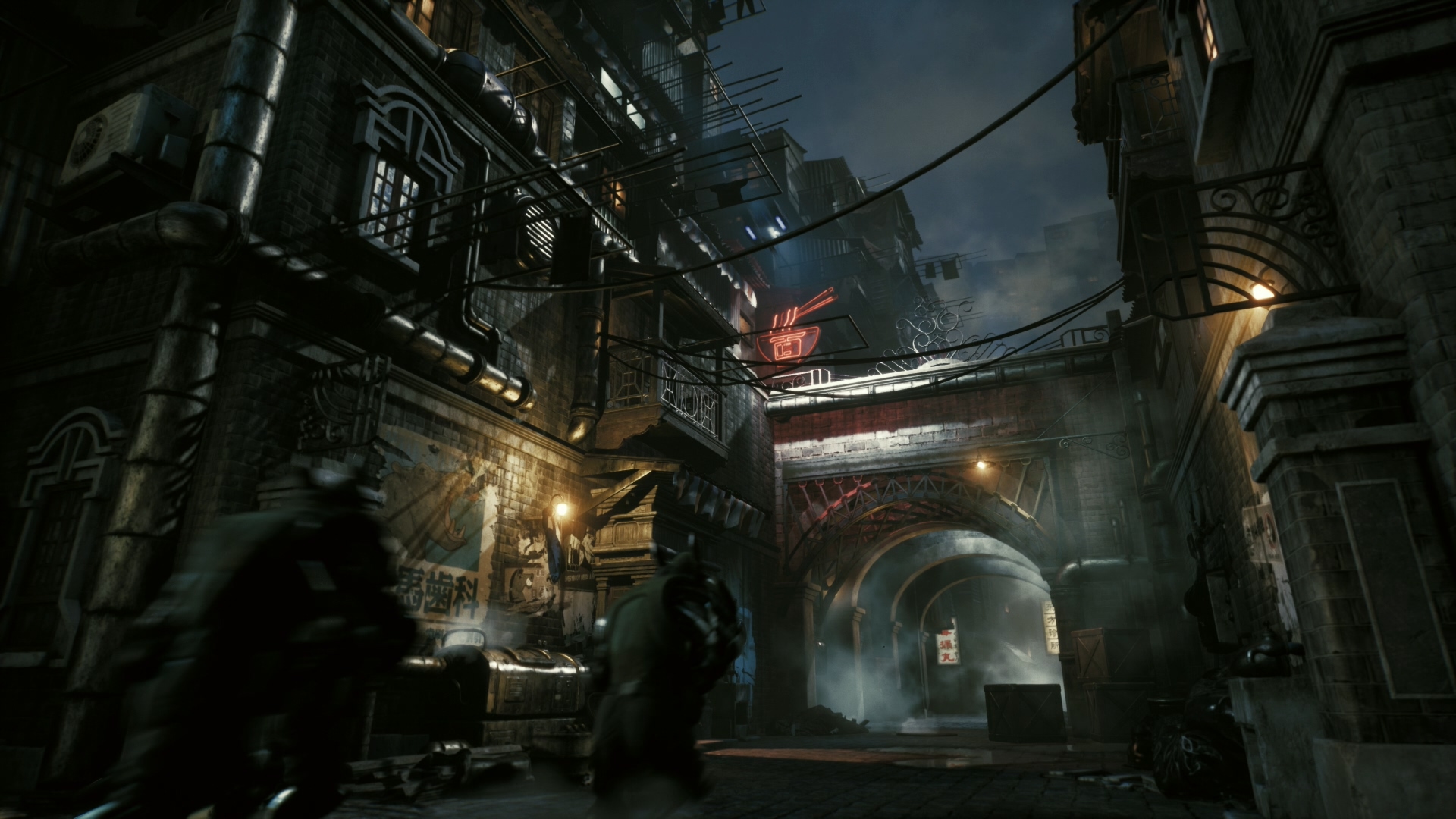 However, surviving isn’t exactly the most viable option anymore and upon learning that some of Rayton’s friends have been nabbed and are on their way to prison, decides to step up and save those wrongfully imprisoned. With his giant robotic fist, Rayton has something to prove, and you’ll be making sure your enemies know what you’re capable of, given the circumstances.

F.I.S.T.: Forged In Shadow Torch is a Hare-Raising Good Time

F.I.S.T.: Forged In Shadow Torch’s gameplay is great and you know what you’re getting into because of the game’s homage to the Metroidvania genre. Combat is executed superbly, and every hit is felt when it lands. Rayton can use a mix of light and heavy attacks that pair nicely with a grab and throw. Also, because Rayton’s a veteran fighter, you see that shown in how he is when facing down an enemy. As you begin to collect powerups, new combos and abilities expand his arsenal of skills, making him even more powerful and downright dangerous. 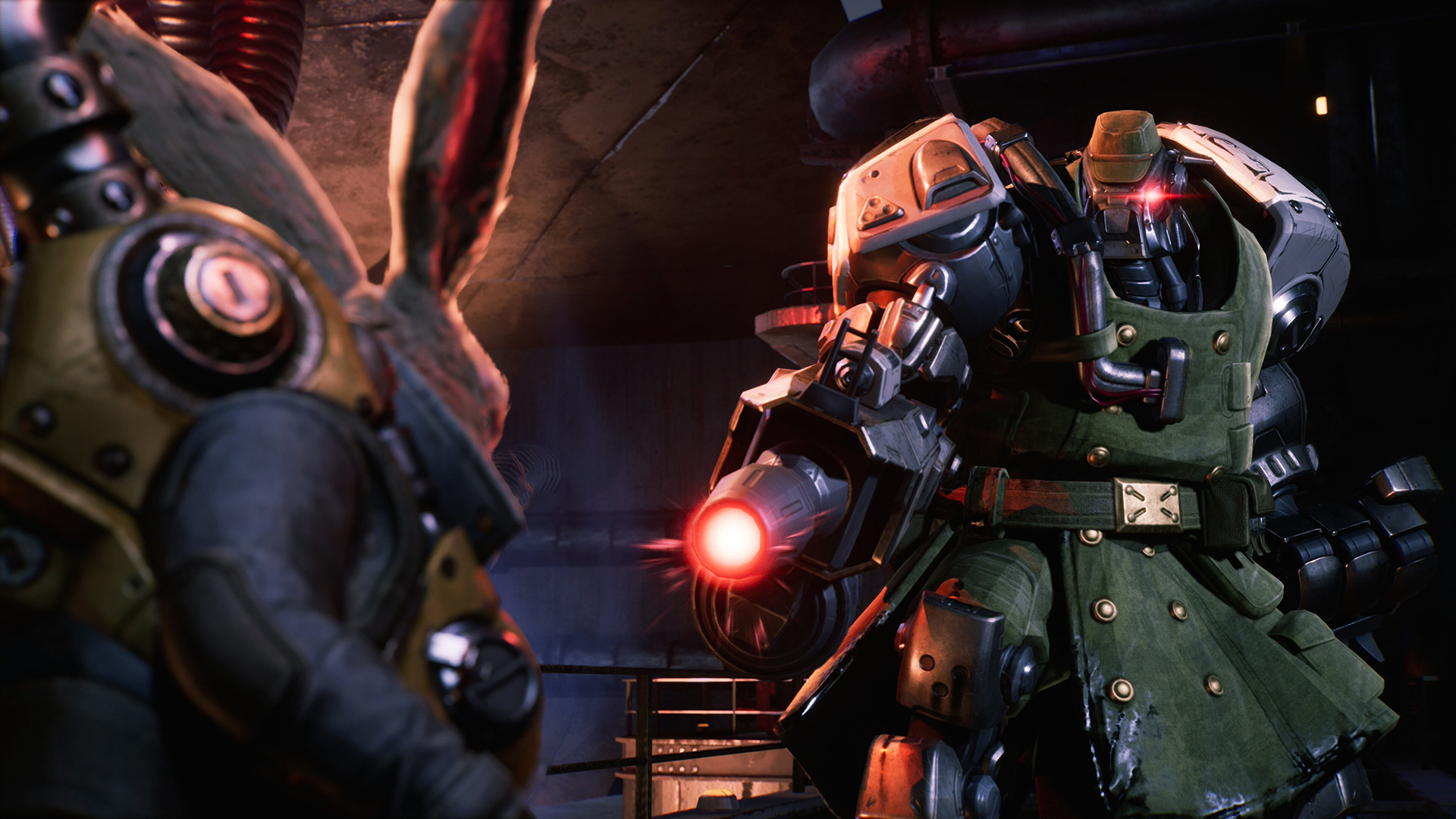 While Rayton’s got the typical double jump, air dash, and standard list of abilities, I found them to be well implemented akin to last year’s Ori and the Will of the Wisps — ­ one of the best in class for 2020. Playing any game with wonky mechanics is downright dreadful but that’s not the case here. Instead, you get a cohesive and finely tuned experience that will test your ability to dodge laser beams, spike platforms, and platforming gauntlets. 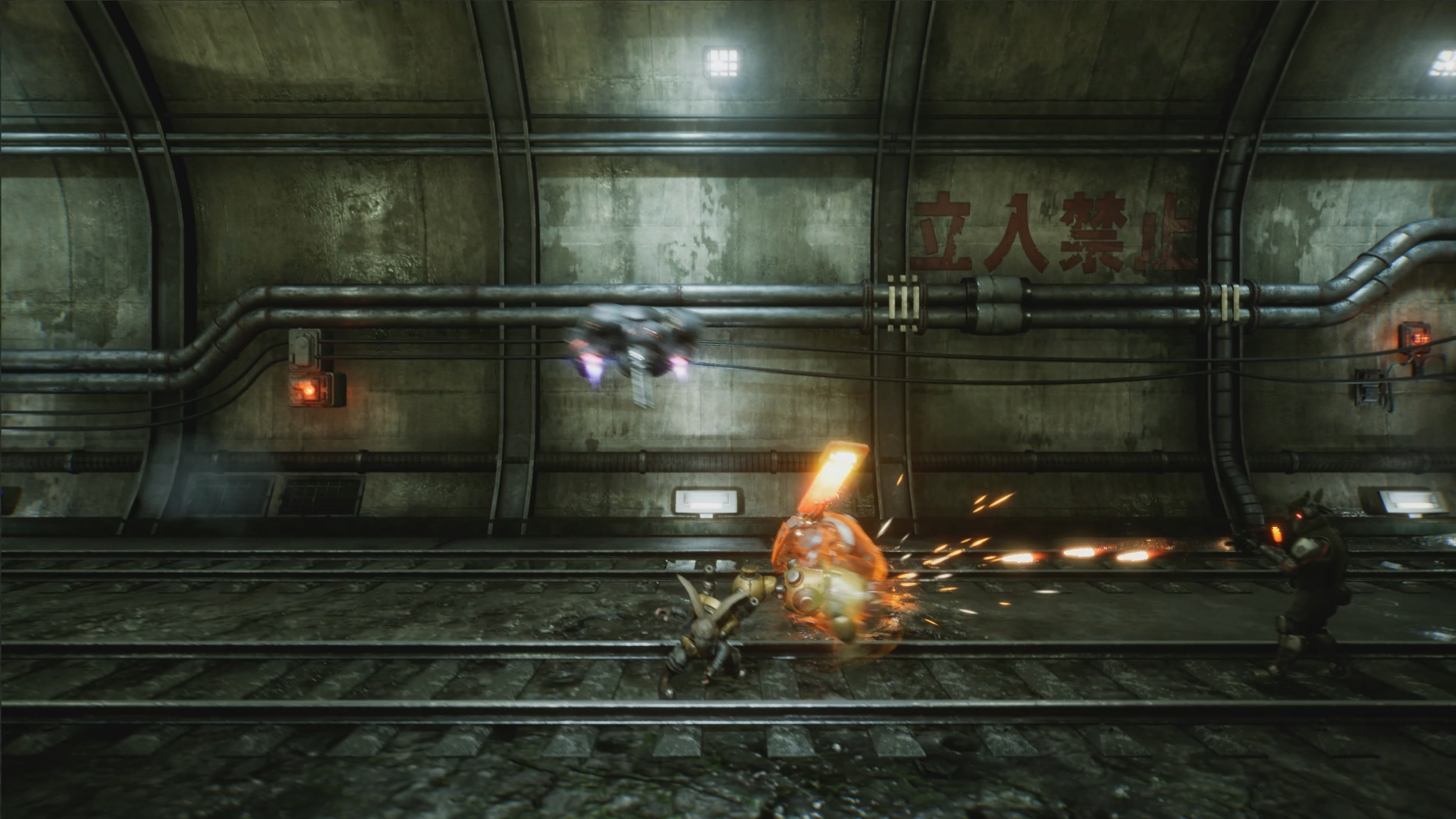 As Ray begins to unlock his final power-ups and combos, the variety in battle expands, leading to later stages with off-the-wall encounters. A lot of the mechanics begin to click once you have a larger move set, making quick work of anything you come up against in Torch City. When the systems bond, Rayton’s a hare-raising rebel brimming with surprises. 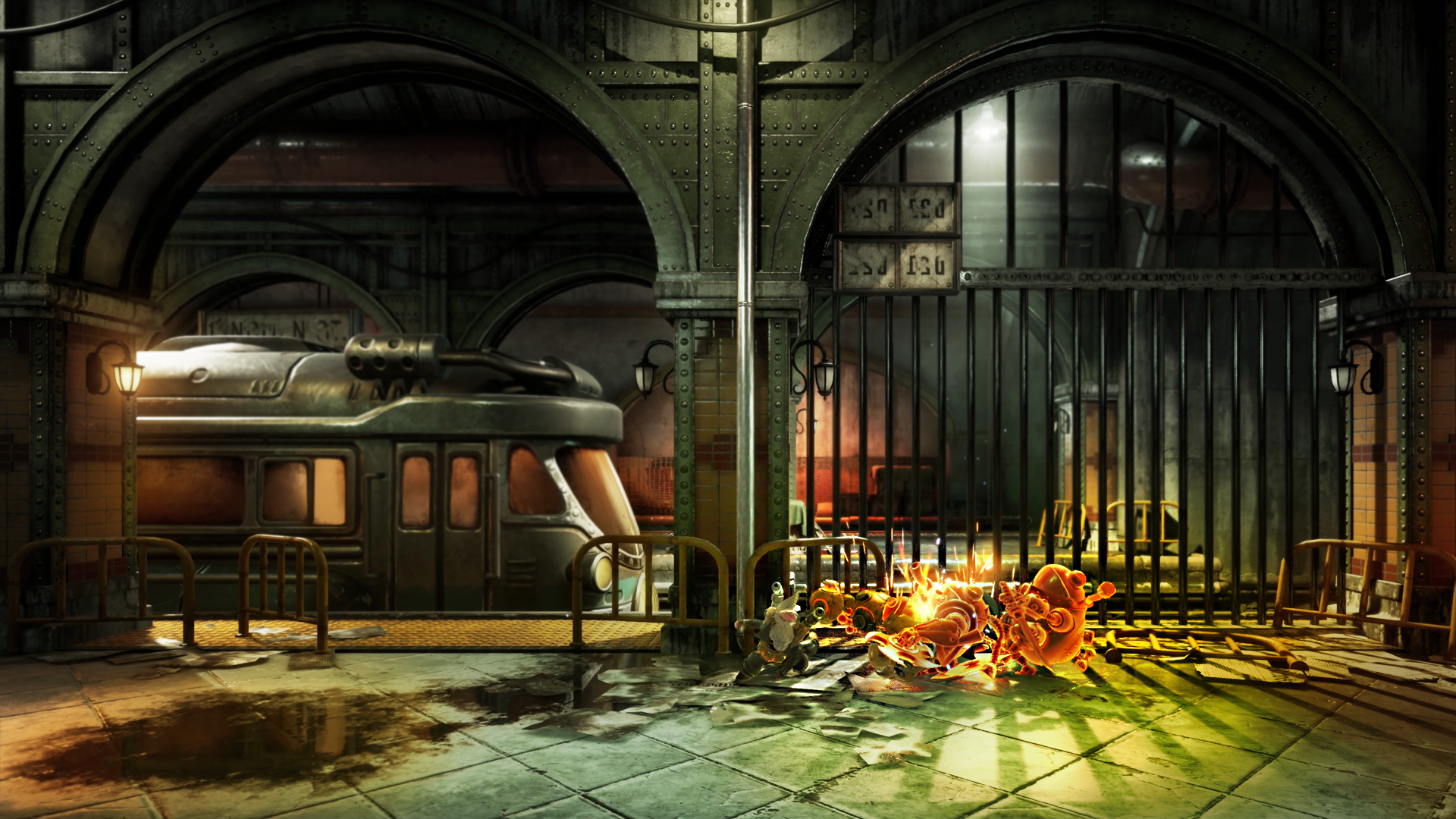 With all that said, F.I.S.T.: Forged In Shadow Torch is rewarding in its exploration. There’s a good level of rewards and collectibles to unlock. Torch City is massive, and you’ll lead Rayton throughout the dieselpunk city on his quest through several hubs. Once you find and unlock those new upgrades, backtracking to previously inaccessible areas becomes immensely satisfying. There is one thing I wish more games within the genre offered – the ability to transport to any of the previously visited levels instead of having to backtrack and is often egregious and tedious. 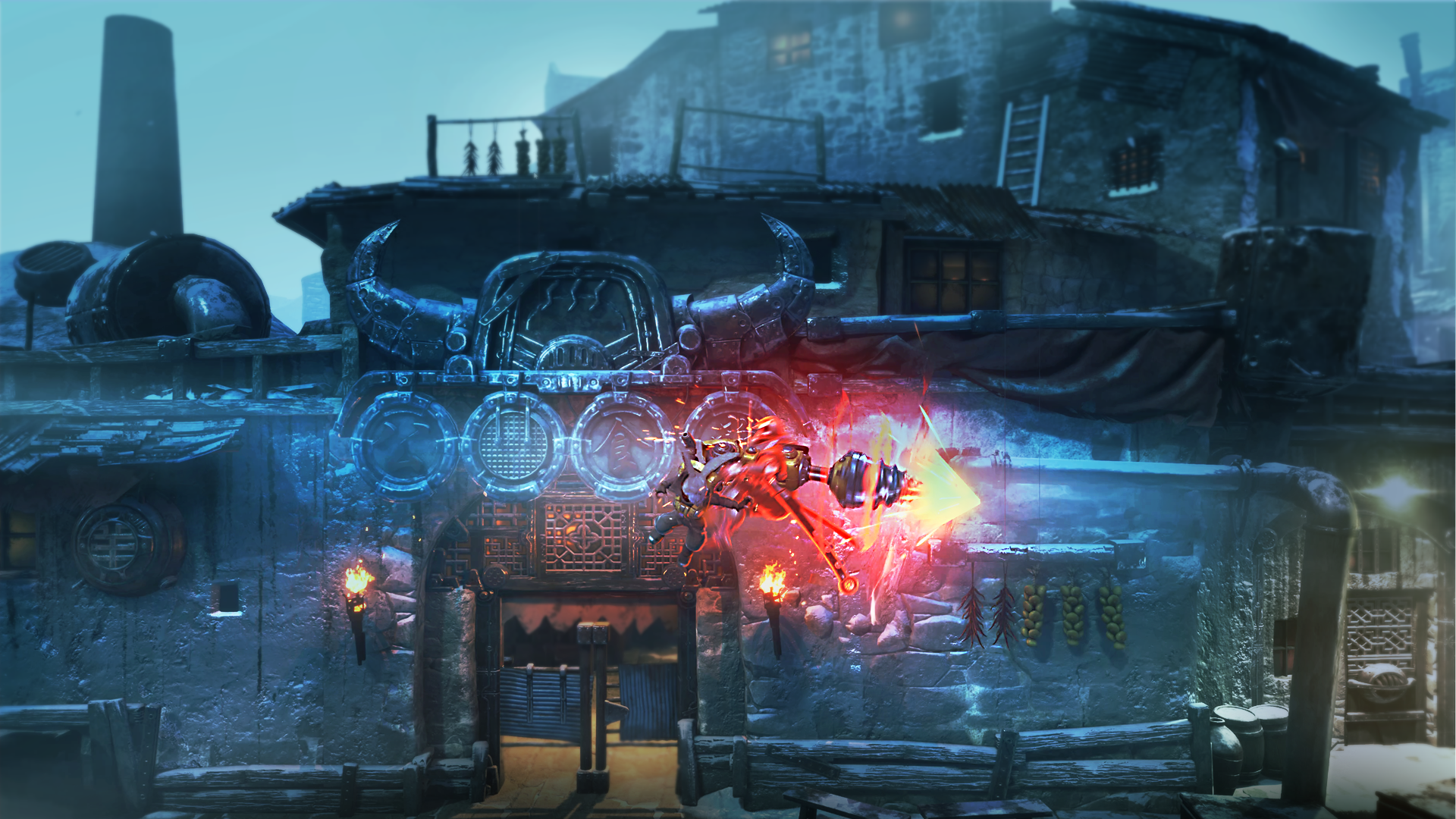 F.I.S.T.: Forged In Shadow Torch may share similar elements of the Metroidvania genre, but TiGames has meticulously created its own unique spin to great success. Offering a challenging, rewarding, and ultimately fun experience, the game is a blast from start to finish thanks to succinct combat and well-executed exploration. Packed with tons of details and smart design choices, Rayton’s story may be familiar but the experience is exciting all the same.