Nintendo’s collaboration with Koei Tecmo has proven successful over the years, garnering critical and commercial success. By pairing the iconic franchises like The Legend of Zelda and Fire Emblem with Musou gameplay, players have been able to experience and play as their favourite Nintendo characters in new ways.

The previous Fire Emblem Warriors game came nearly five years ago and was one of the better Musou-style pairings. Developer Omega Force delivered a rather impressive crossover that bucked the trend of bland gameplay by invigorating the genre with the world of Fire Emblem and it paid off. It would make sense we’d see the winning combination once again and rightfully after 2019’s Fire Emblem: Three Houses — a game I was infatuated with when it launched. Returning to these characters and this world once again in this month’s Fire Emblem Warriors: Three Hopes is more than I could have asked for and it readies itself for launch nearly three years after Three Houses with some stellar improvements.

And for those worrying about whether or not the traditional Fire Emblem experience is intact — you can play under the Classical Game Mode if you want your fallen units to be permanently lost. Fans of the more Casual Game Mode can select it at the start and not worry about losing units to battle.

Diving in I would expect players to be familiar with the places and characters of Three Houses as the events that transpire in Fire Emblems Warriors: Three Hopes take place in the years prior and somewhere in the time skip of Three Houses. As the playable character Shez you will have your hands full. There are once again three routes available to the play in the effort to save Fódlan. I went with the Azure Gleam (Dimitri) route picking up where I left off in the demo earlier this month, and players have a total of three paths featured in Three Hopes — the other two being Scarlet Blaze (Edelgard) and Verdant Wildfire (Claude).

For those who have played the demo and completed it, it’s a great introduction and kicks off the larger conflict. However, the problem I have with Three Hopes is that it has to fill in gaps in a narrative that fans may have completed more than once. The first four chapters essentially retread the same pre-war story beats and I personally never found those to be interesting. In a sense, it’s ironic because we know what happens to these characters by the end of Three Hopes however this is supposedly an alternate timeline where characters like Dimitri do not end up ruling or Edelgard becoming the Flame Emperor. 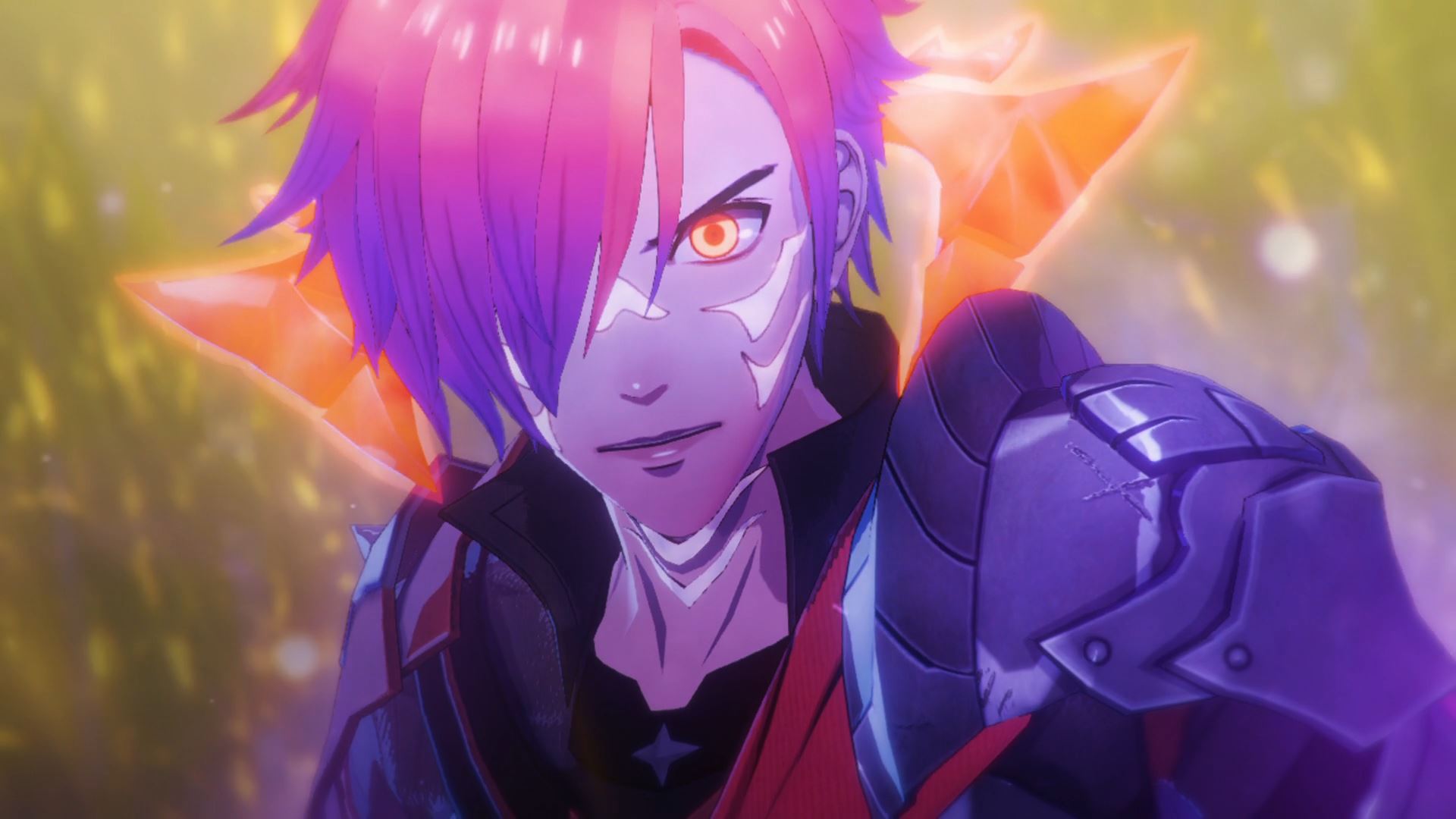 Newcomer Shez is surprisingly hilarious as the protagonist of Three Hopes. In Three Houses, Byleth was a silent protagonist and I expected this trend to continue. Thankfully it didn’t as Shez is a breath of fresh air even if he (I went the male route) is a bit one-note — all Shez seemingly cares about is coffers and battle after all. A lot of the returning cast has their moment to shine too given that in Musou games a lot of story takes the backseat to gameplay.

Fire Emblem Warriors: Three Hopes sheds its tactical side for a brash and bold action-RPG battle system. Despite the change in genres, the gameplay works well giving you a great opportunity to engage in a power fantasy as you hack and slash armies of foes across the battlefield. The mechanics bring out a different side of franchises like The Legend of Zelda and Fire Emblem and it is a refreshing way to revisit the series outsides of the core experience. 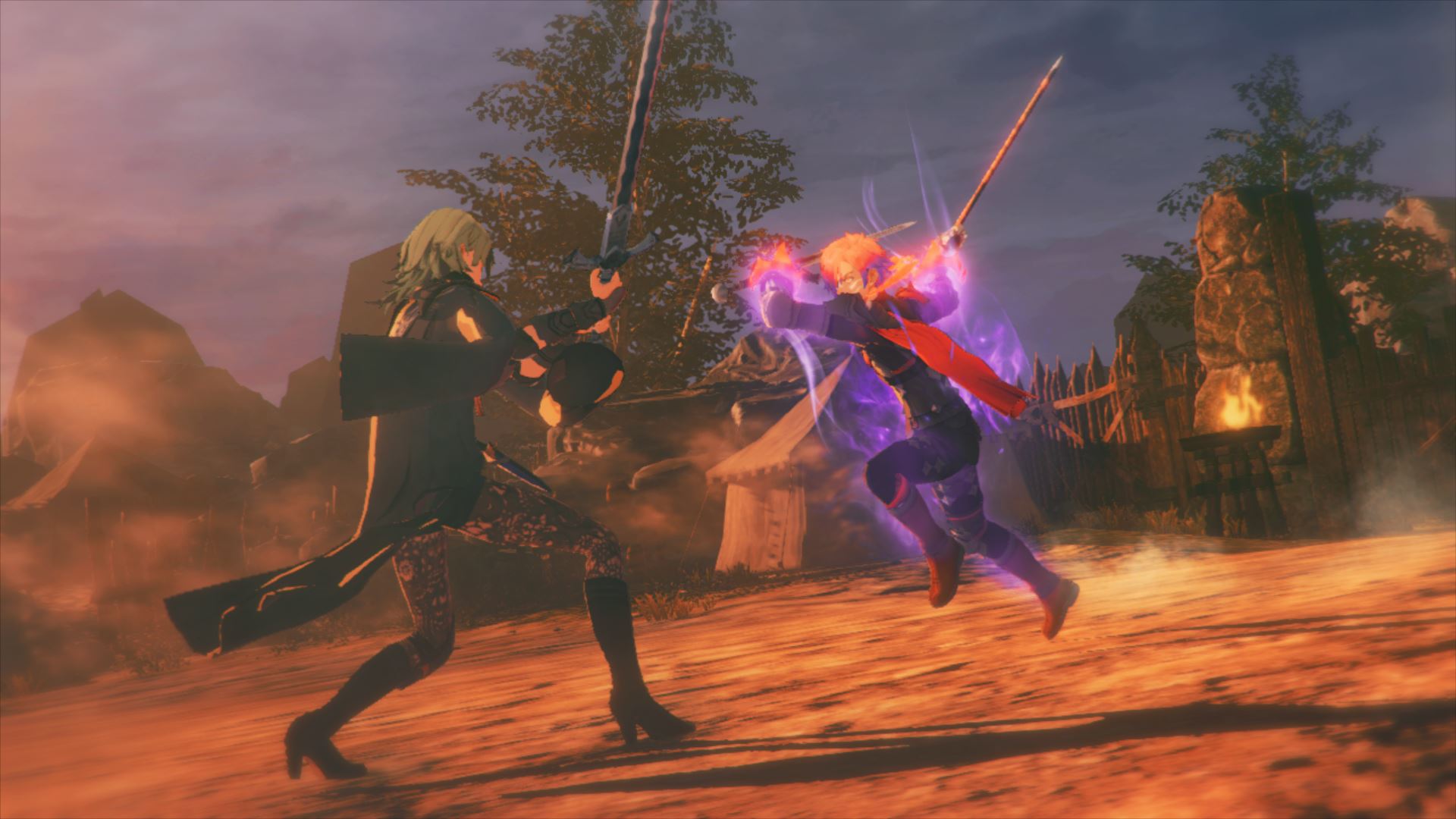 No longer do you worry about moving one character at a time in a grid and now have the breadth and space to tackle hordes of soldiers with a satisfying, gleeful wave of your weapon. Despite what I’m sure some of you are thinking, Three Hopes isn’t a simple skin of the Musou style and adds a level of strategy, elevating the entire package. Instead, the game begins to dole out new systems and mechanics to the player at t welcome pace giving you enough to manage inside of battle and outside of battle.

Fire Emblem is one of the best franchises to take advantage of the Musou experience.

When playing Musou games you often control more than one character and that tradition continues in Three Hopes. For the majority of each mission, you’ll have your roster interacting on the battlefield, ducking, and dodging incoming attacks and basically creating flashy, stylized battles while blasting through overwhelming enemy forces. If that sounds enticing to you then let me confirm it for you — it is as fun as it sounds and highlights how well the gameplay fits the series. You can even perform critical rushes with your adjutants to deal even more damage (just like in Three Houses you can assign adjutants). Some of your adjutants are there to break enemy ranks, others can protect you from incoming strikes and so on. You can set your aids before the battle begins by heading into Units, choosing the unit and then pressing Y to set the adjutant. 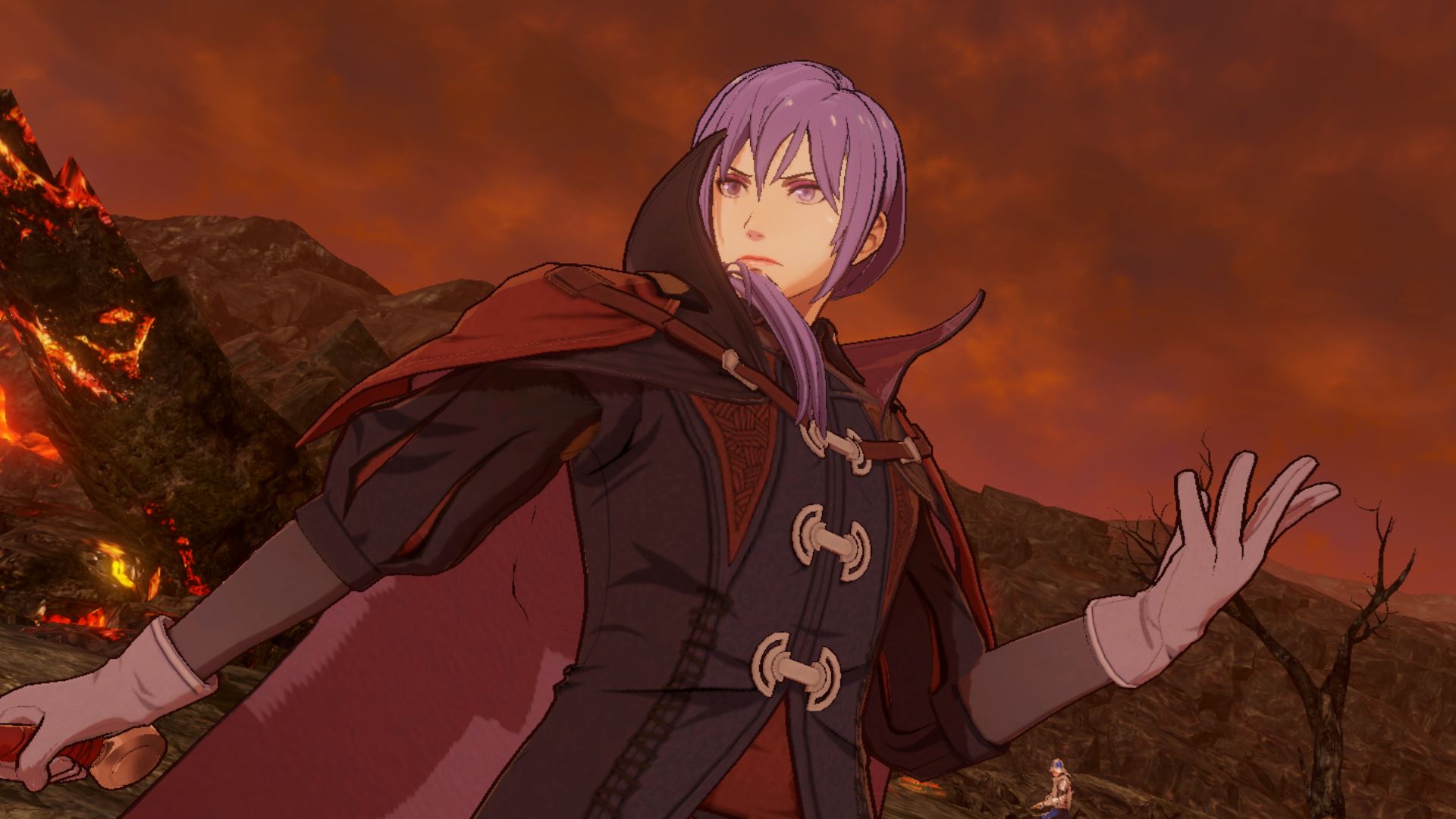 Fire Emblem adds its fantastic rock-paper-scissors mechanics with a great gameplay payoff. In Three Houses, players will deal more damage to the opposing trait, giving you the opportunity to overpower enemies e.g. Swords over axes, axes over lances, lances over swords. Despite the mechanics sounding overwhelming, it really isn’t and in no time you’ll be on your way to dealing major damage against enemies. Additionally, the encampments are a great way to build relationships and improve your stats, buy items, and gear, and visit your personal quarters. You can even complete chores and earn bonuses by working at making camp a better place and I find these small little things a great way to spend time with these characters.

With so many systems in play and wonderful characters available for use, it comes at you at a commendable pace so you never feel overwhelmed. You can pause the action to not only gain your bearing but plan your next moves in battle and swap characters. Classes also play a big part in Three Hopes with the choice of training them at your camp to become stronger in battle. Shez starts out as a Flugel specializing in dual-blades and magic with the option to expand into beginner, intermediate, advanced, and master levels of branching classes. 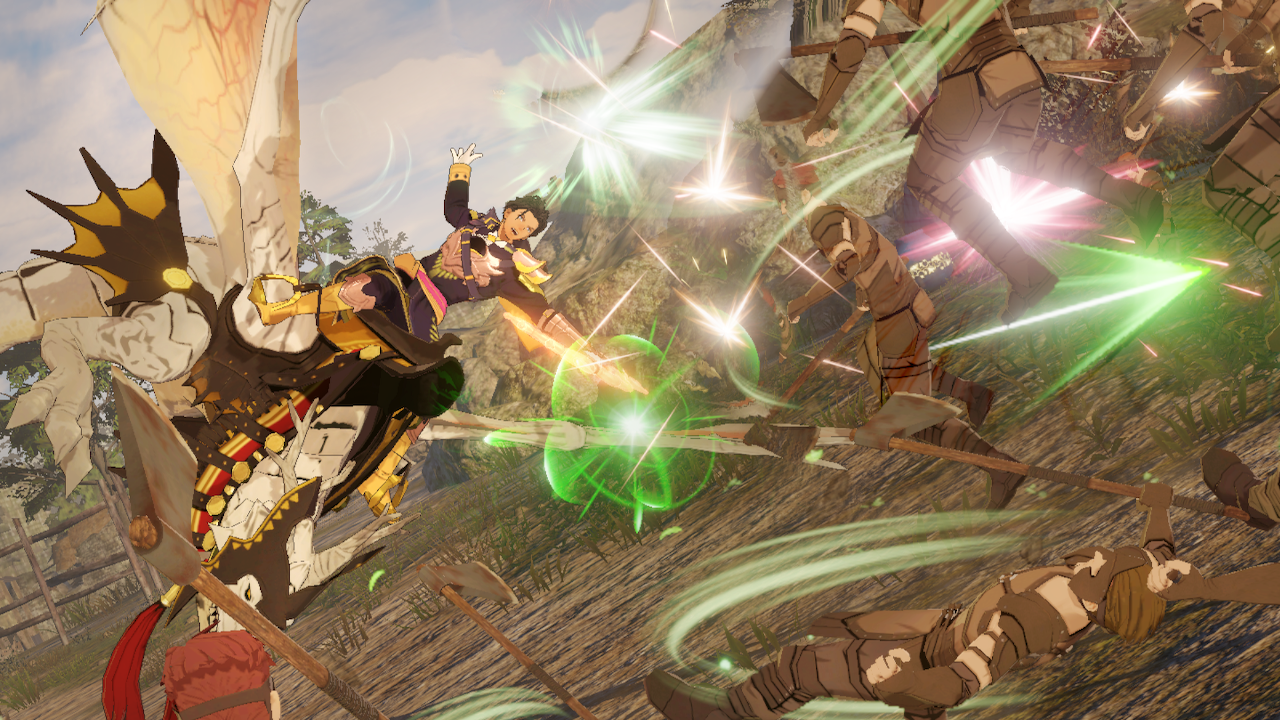 The game’s world maps are a detailed, important place where you’ll select missions from the main campaign, attend to side quests, and conquer the various regions. Three Hopes gameplay loop is generally pretty well thought out and sees you completing a series of battles before completing the region’s main story missions, rinse and repeat for the several regions at play. In general, the experience itself is polished enough and many of the character-specific missions are highly enjoyable— many of these incursions offer weapons, loots, gold and experience for completing them.

War pushes the profit margins up, but at what cost?

Unfortunately, the one thing that I struggled to resonate with was the main missions. These are sometimes repetitive missions and standards for Musou’s gameplay. In battle, you come across several missions but the main ones are stretched-out campaigns I had less fun completing than Persona 5 Strikers offered. My reasoning here is that it felt easier to track the action unlike in Three Houses where it can be overwhelming to keep track of the situation. 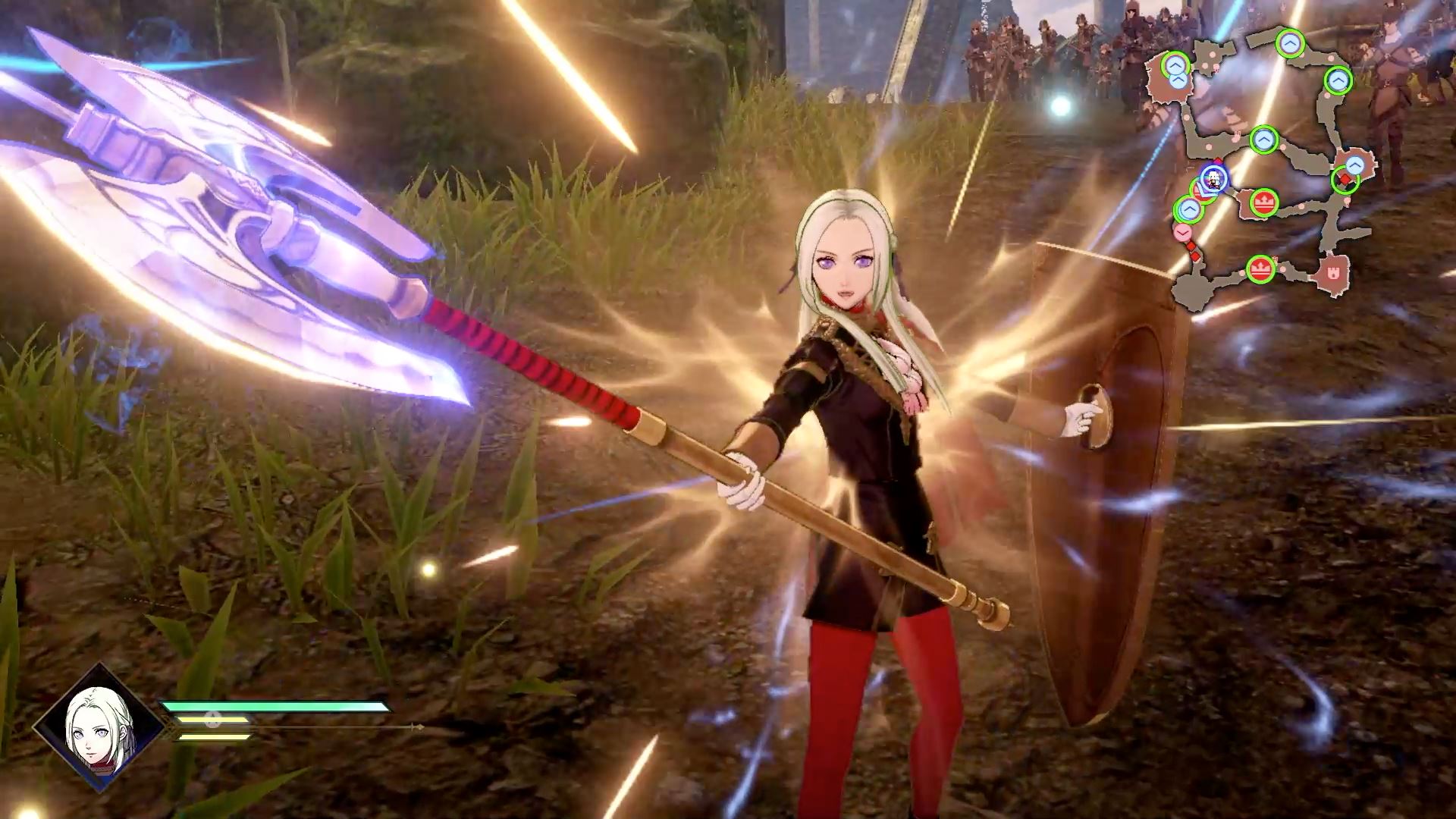 Tying into the main missions is the inclusion of Combat Arts and generally, these add a wonderful layer to the gameplay. These are accessed from the Quick Menu and cannot be used multiple times in a row, as there is a cooldown period. Combat Arts are a great way to inflict a lot of damage and status effects against enemies but at the cost of weapon durability. That’s where the cooldown comes in and where you’ll need to consider the pros and cons of each skill and when to consider using it. The way the mechanics are implemented gives you more things to consider in your journey with less mindless combat to worry about.

Last year’s Hyrule Warriors: Age of Calamity had severe performance issues on the Switch. In both handheld and docked mode, Age of Calamity had a lot of trouble keeping up with the action on screen and thus, the framerate would tank. The Switch is now more than halfway past its lifespan and games feel like they suffer from bottleneck performance due to the hardware. 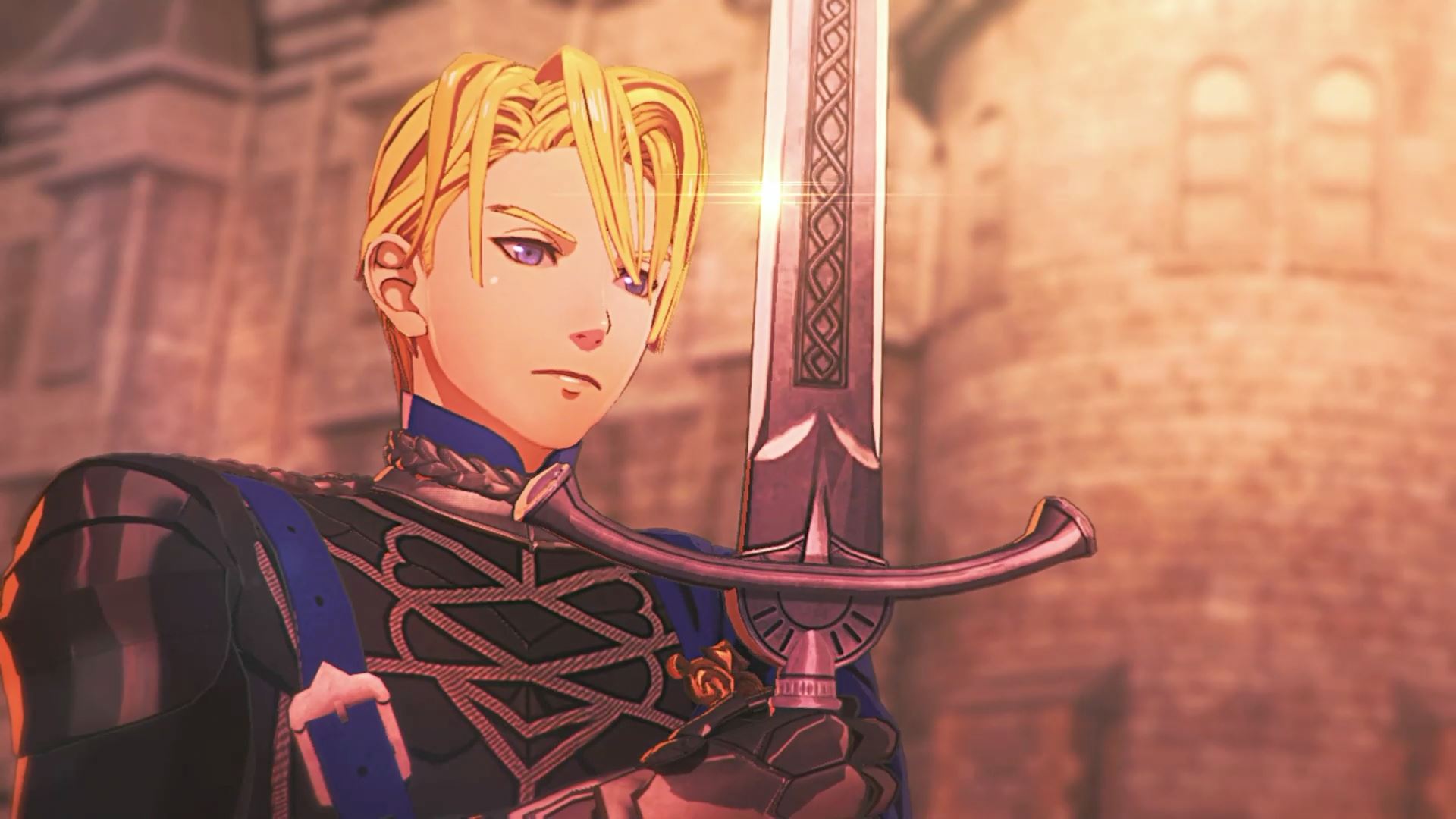 Given that Three Hopes was created by Omega Force, I was worried the same issues would flare-up. Thankfully, the situation looks to be far better than Age of Calamity — my entire playthrough seemingly hovered around 30 frames while docked and in handheld mode. Certain screens like battle results and interiors would haphazardly shift to 60 frames, leaving my eyes scrambling to catch up. It seems the framerate has been left uncapped yielding some unruly results. 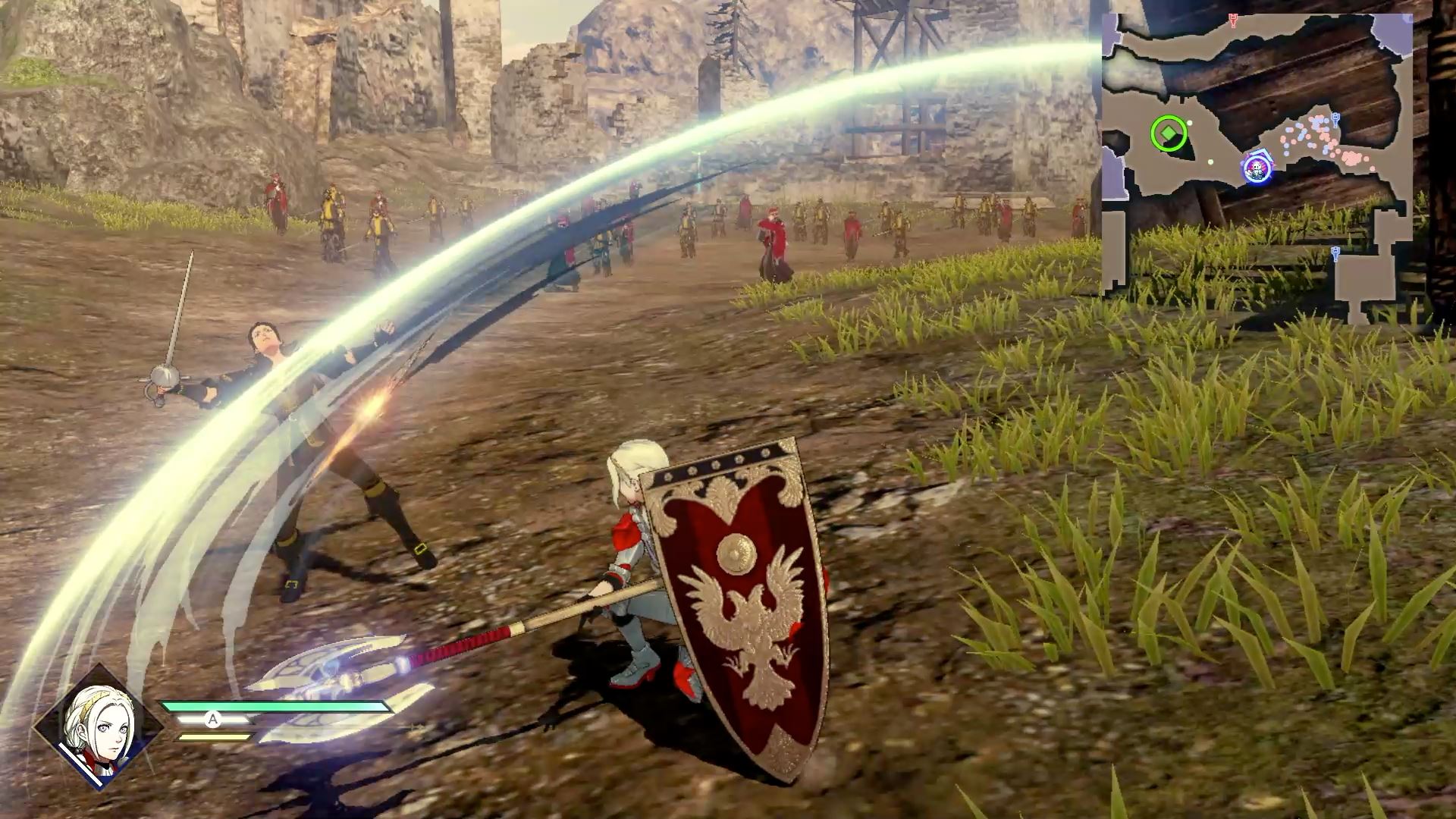 Fire Emblem Warriors: Three Hopes is a great retelling of Three Houses that changes just enough to make it stand on its own. Musou-style games won’t appeal to everyone, but Three Hopes is a tighter experience than its predecessor. The battles are generally fun if a little repetitive but when you’re in the thick of things it all ends up coming together to deliver satisfying set-pieces. If you’re a newcomer to the series then fret not, you’ll see an alternate take on the events but you’ll be able to enjoy the story and gameplay just the same.

Recommended
A great 'what-if' scenario of the Three Houses storyline
Fire Emblem continues to pair well with Musou-style mechanics
Shez is a great addition to the story
The gameplay packs a lot of gameplay systems that end up blending perfectly
Hits a few of the same narrative bumps as Three Houses, framerate drops in camp
Related