I was there in the audience when Square Enix revealed the first look at Final Fantasy VII Remake at the PlayStation Experience in 2015. The energy I felt that day from the crowd as well as online reactions I read after, is easily one of the highlights of my career within the industry. I’ve never felt such raw emotion from a group like that before. I can compare it see Captain America picking up Mjolnir in Avengers: Endgame, the theatre I was in went nuts and that energy is addictive. Five years later, and we’ve finally hit that illustrious moment: Final Fantasy VII Remake is available now.

It has been 23 years since the original Final Fantasy VII set the world ablaze with its characters, worlds, and story. Each of us who’ve played the original created our version of Midgar and the world surrounding the city of light. I was always aware of the RPG genre when I was younger, but it wasn’t until Final Fantasy VII that I understood what games were capable of in the right hands.

Fast forward to 2020, where an expanded version of one of the most beloved video games of all time is finally out in the wild. I’ve spent 40-plus hours on m playthrough, and I know I’m ready to see what comes next. When Square Enix first revealed that the remake would be split into an episodic series; the first set entirely in Midgar. However, in the original, the dystopian city only served as a fraction of the narrative in 1997, with the average playtime being around 6 hours. 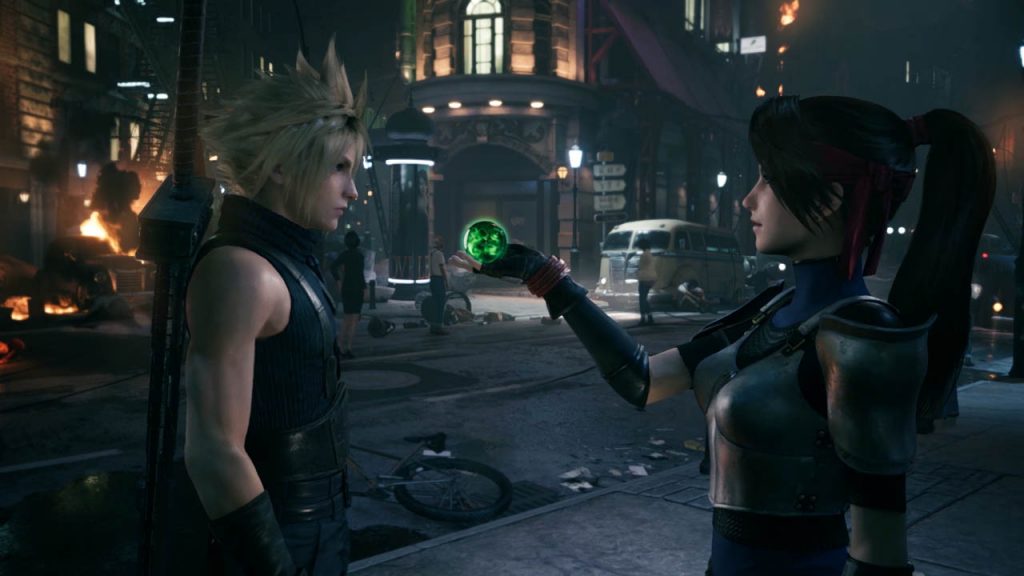 The opening moments introduce us to Avalanche – the eco-terrorist group hellbent on saving the planet from being bled dry from Shinra’s Mako Reactors. Beginning with the familiar and exhilarating Bombing Mission, the action quickly ramps up and introduces us to Cloud, Barret, Jessie, Biggs, and Wedge. Square Enix has done a stellar job at expanding each character and that includes the Avalanche trio who in the original was little more than background characters to move the narrative forward. In Remake, Jessie, Biggs, and Wedge are fully realized and offer much more to the player, allowing us the opportunity to bond with them and learn about who they are. Seeing Jessie fawn over Cloud and their interactions are some of the best moments the opening chapters offer, and the remake leverages our memories to flesh out the supporting cast.

It’s the same but different

In fact, the changes I uncovered throughout my review left me smiling. Cloud’s not that mopey man we saw in Advent Children, instead, he is presented as a serious-faced, even goofy guy who tries to be cool. This version of Cloud is easily my favourite representation of the character I grew up with and we see new sides of him in the remake. Tifa and Barret are much improved, too. Spending time with Tifa in the Sector 7 slums, through Wall Market and straight to the finish line, her personality hasn’t changed but how she’s presented resonates much better this time. Barret isn’t so one-dimensional and while he still retains that Mr. T persona, it’s just that: an act he puts on when out in the field. 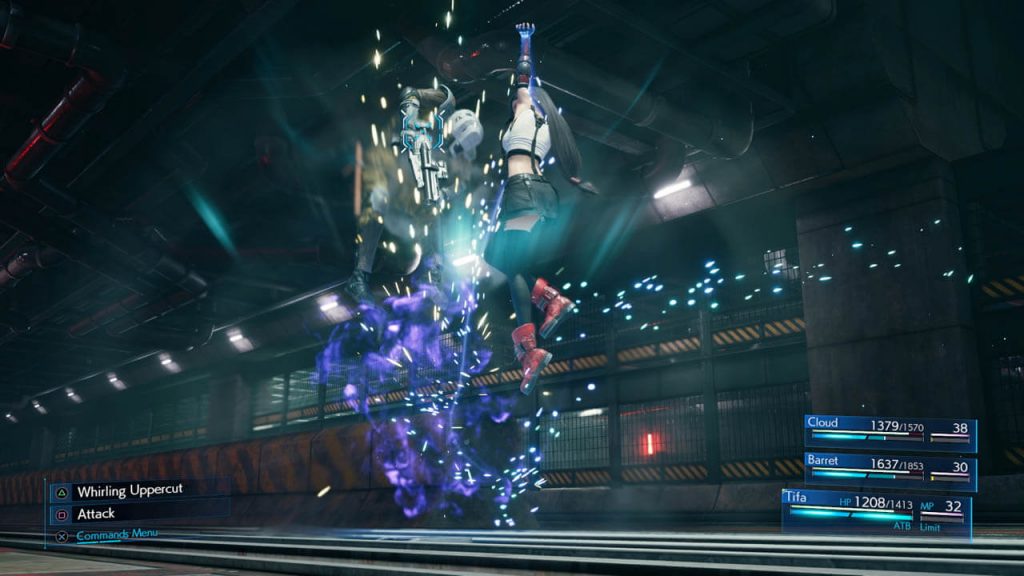 In one scene in particular that stands out is when Barret sighs heavily before turning on his persona of loudmouth rebel, in a quieter moment we see a man who deeply cares for his daughter and community. It’s a massive departure from the stereotypical character of the original game and it plays much better in Remake.

Aerith is also vastly different in the remake but it’s quite honestly the best portrayal we’ve seen of her, and likely will see. I enjoyed her personality in the original but the writers have done an excellent job at making her more fun, even chirping Cloud from the moment she meets him in the church. Their relationship makes sense and the character is fleshed out particularly well in the remake. 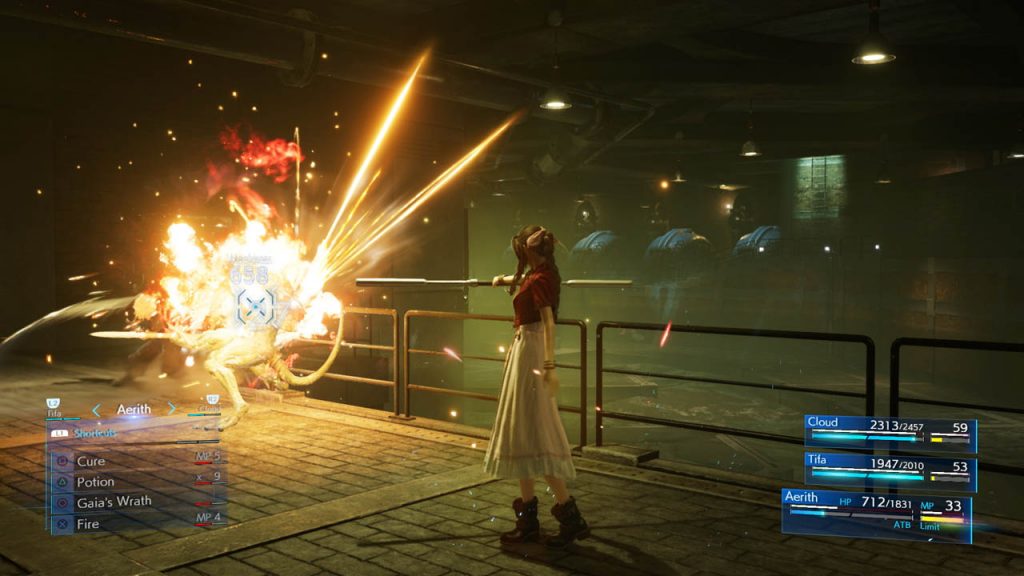 Since this is only a fraction of the original game, we only control a fraction of the party. Of the characters included, each one is more than capable of dealing with any situation they are put in and each character has their own unique skill. Cloud’s Punisher mode, for example, keeps our hero on the defensive, countering any physical attack at the cost of mobility. Tifa’s Unbridled Strength grows in power every time you charge her ability, culminating in Rise and Fall, an advanced technique. Aerith’s Tempest ability is a powerful magical attack that can be charged by holding Triangle. Barret’s Overcharge is a powerful concussive blast that easily staggers enemies but needs to be manually recharged by pressing X. 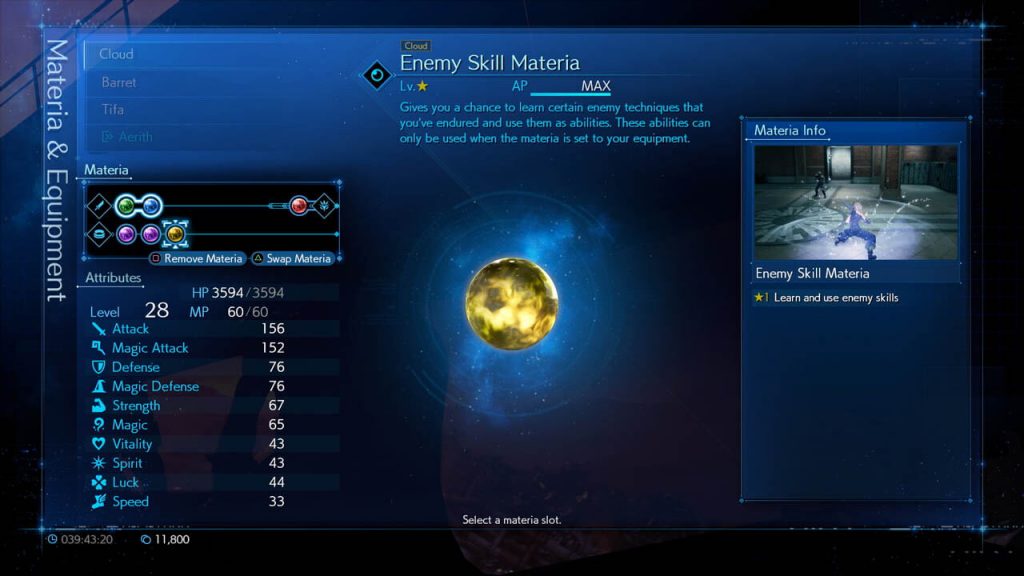 Materia is crucial to survival in Final Fantasy VII Remake. As is the new weapon upgrade system used for each weapon you’ll come across. For the most part, the Materia system works about the same, and there are new types of Materia you’ll come across. Every weapon and accessory comes with a pre-determined amount of Materia slots, which come in both single and slotted variants; this system ties into the new weapon upgrade system where extra Materia slots unlocked amongst other things like added attack or magic bonuses. I walked away rather impressed by the new systems the developers thought of even though at the beginning I was not only unsure but against them. But the more I invested into their specific skill trees, the more I enjoyed customizing each character to a specific role.

All of these new pieces in play often culminate in epic boss fights, leading to some of the most memorable encounters I’d had in years. These aren’t just showdowns, but cinematic confrontations that mix gameplay with narrative and somehow come out feeling epic rather than overplayed. I get goosebumps when I think about the encounter with the Airbuster encounter in Final Fantasy VII Remake and it’s going to be some time before another game can that to me.

And while not everything is as perfect as the combat, there are some things that pad the experience and leave me wishing Square instead focused on more quality content. For starts, the inclusion of sidequests is always welcome but at the cost of being bland fetch quests, simple monster hunts and running around areas looking for cats; they come across as disingenuous to the experience. I understand the necessity of them but when a game of calibre is asking me to do a mundane thing to pad out the clock, I’m left disappointed. 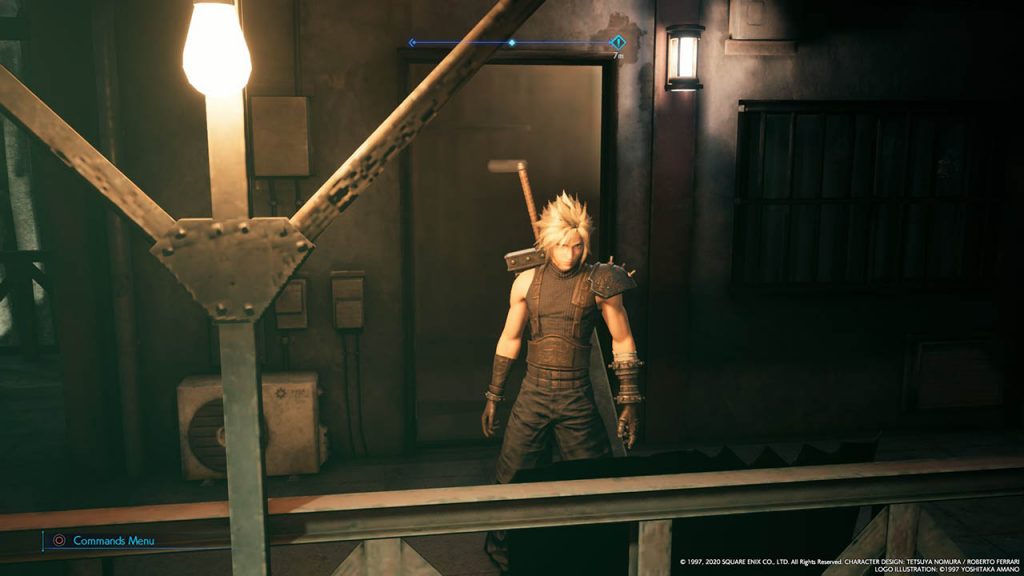 While that’s the worst offender in terms of content, the biggest issue Final Fantasy VII Remake suffers from is hideous texture issues that rear their ugly head. In some instances, textures would not load, other times they would load slowly and in certain sections of the game, the backgrounds came across flat and out of place. And while for the most part, the NPCs fair better, there is still often lifeless characters walking about, offering

A big chunk of nostalgia for many fans of Final Fantasy VII is the original’s near-perfect musical score. I have fond memories Nobuo Uematsu’s score and I’m sure you do too. For Final Fantasy VII Remake, the soundtrack added composers Masashi Hamauzu and Mitsuto Suzuki to the legacy of the game, effectively creating a familiar, yet bold new soundtrack that delivers on every track. It’s marvellous how well each song was handled, and the way one track spins off into several iterations to play into a particular moment proves how much this project meant to the team of composers working on this project.

Very few, if any video games have the same expectations built around them and yet Final Fantasy VII Remake delivers on almost all of them. Granted, there are some growing pains that come with a longer development cycle and a few warts begin to surface. However, the combat is easily the best of the series has seen, delivering on the legacy of the original and welcoming a new generation to one of the greatest video games of all time. Each character is expanded upon and fully realized, the story is deeper, and the music offers some of the most exciting and memorable riffs in recent memory. For those who missed out on the original, your chance to understand why Final Fantasy VII resonated so well all those years ago is finally here. Or if you’re one of the many who were there at the start, we get to experience the game as it was meant to be.