We’re just over a year past the launch of Final Fantasy VII Remake on PlayStation 4 and if you’re waiting to find out what happens next, it’ll be a while until we learn what comes next. Instead, this month’s Final Fantasy VII Remake INTERmission expansion focuses on Wutain elite operator Yuffie Kisaragi and newcomer Sonon Kusakabe, a ninja working closely with our favourite materia hunter.

One of the big things about this expansion is it signals the arrival of Final Fantasy VII Remake on PlayStation 5, offering a wealth of quality of life upgrades that make the experience much better, improving load times, adding better lighting, better textures, as well as some free DLC. Is the expansion worth your time and more importantly your money? I think so, Yuffie is a fan-favourite character brought to life by Suzie Yeung in a knockout performance.

The expansion takes place somewhere in the middle of Final Fantasy VII Remake, not long after Avalanche bombed the sector 5 mako reactor and with Shinra searching for Barrett, Tifa, and Cloud in the slums. Yuffie infiltrates Midgar in search of the ultimate materia, a powerful weapon the Wutai government hopes will turn the tides against Shinra. What works is how Yuffie reacts to any situation, an air of seriousness mixed with a goofy nonchalance that walks a fine line. 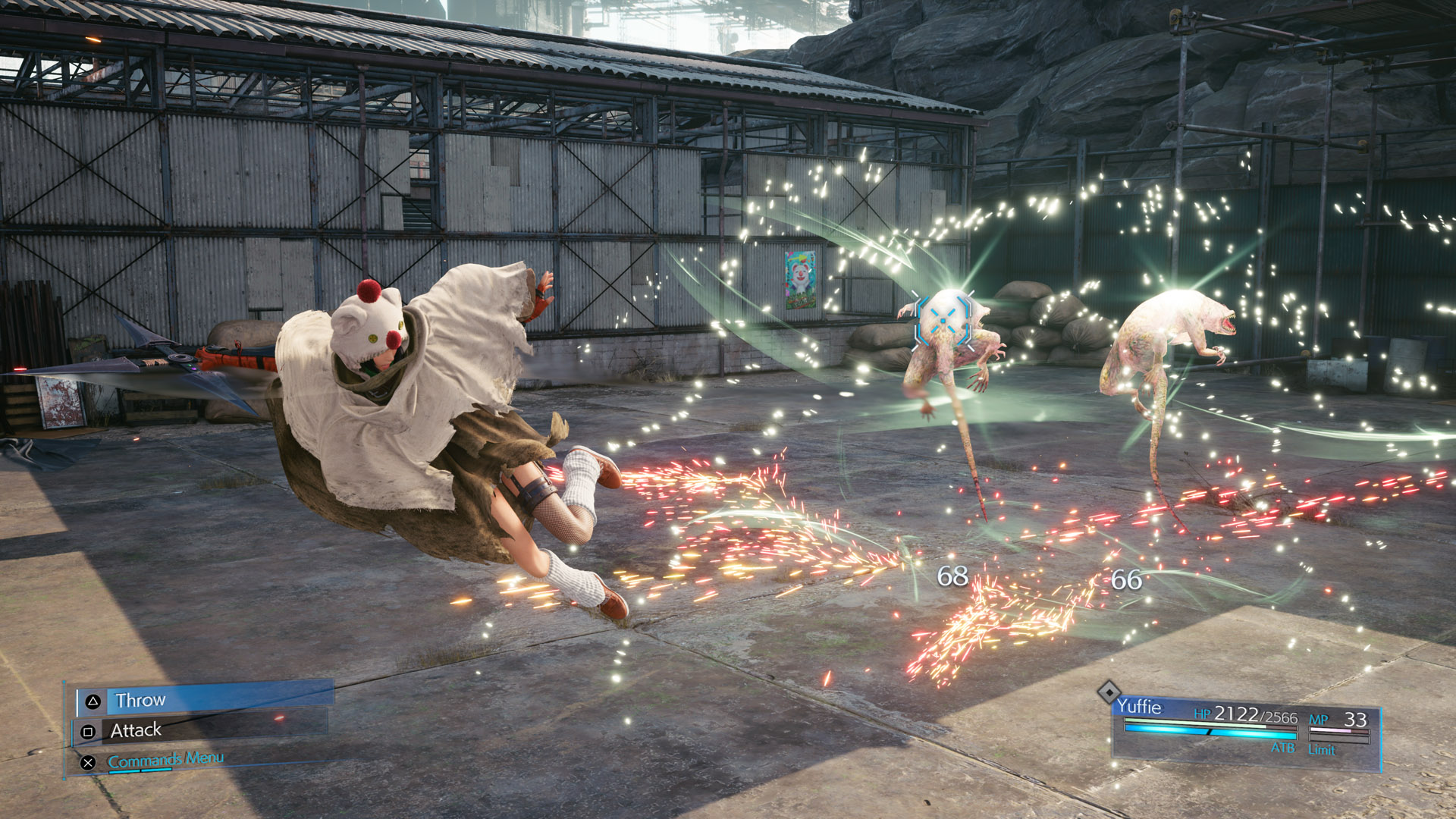 I had a bit of trouble getting back into the groove of playing INTERmission, mainly because the game drops you into the expansion. Basic concepts of the battle system were hard to remember at first, but the muscle memory returns after an hour or so. It’s even recommended you only play as Yuffie after you finish the main campaign.

From the main menu, you can select between Final Fantasy VII Remake or with a tap or R1 begin playing INTERmission, the Yuffie-centred expansion.

From the initial announcement, I was worried how Yuffie would handle in battle but I was off-base and using Yuffie’s ninjutsu abilities paired with her iconic 4-point shuriken is a blast. Aerial combat has never felt good in a Final Fantasy title, going back to Final Fantasy XIII but Square has nailed it with Yuffie. She’s agile, adaptable and exhilarating in battle. 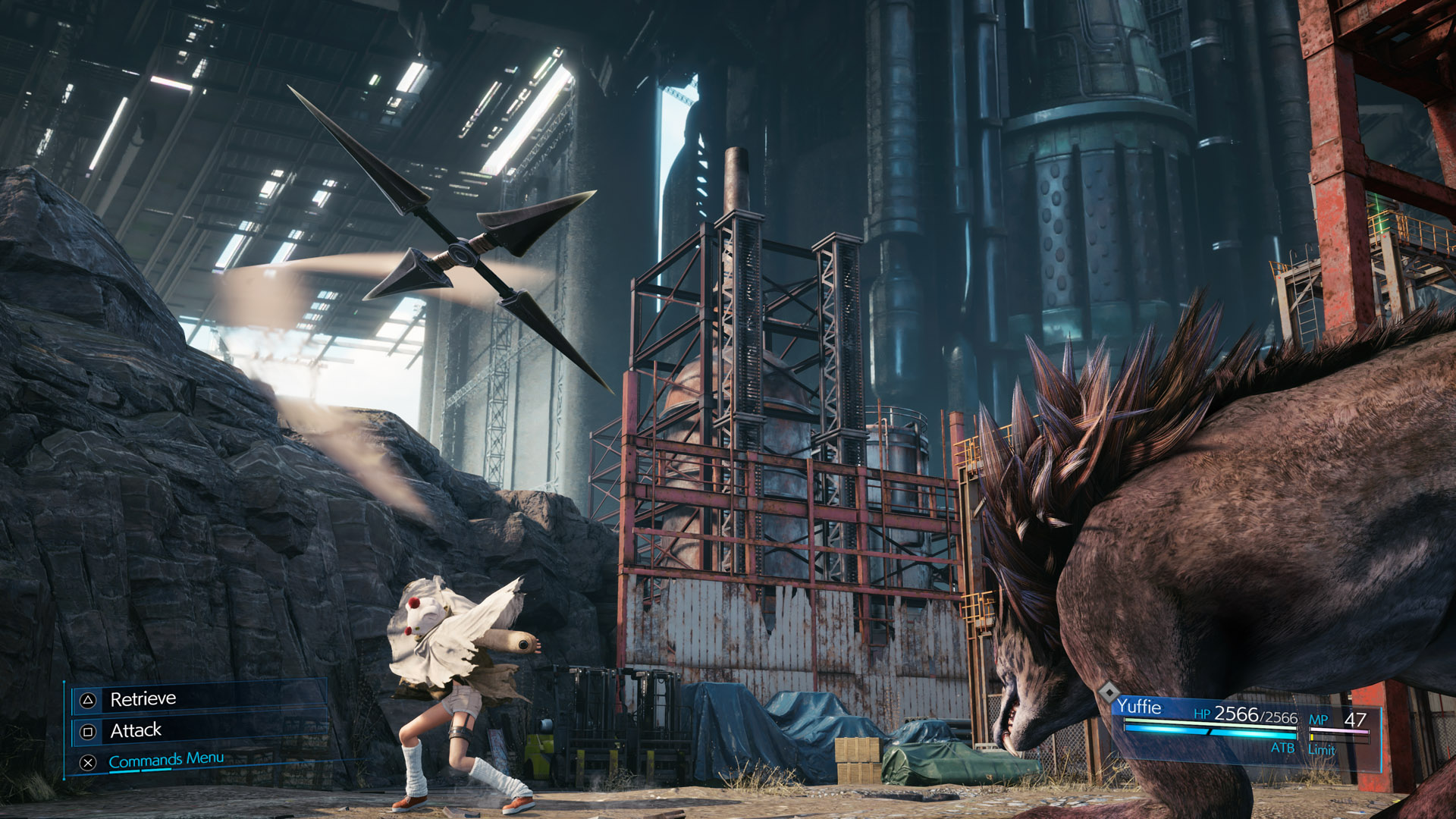 Yuffie is offensive and her primary role is being aggressive. In that regard, she excels at combos and keeping the enemy occupied and always taking a beating. You can use the shuriken up close or ranged, and when the shuriken is in ranged mode, Yuffie’s ninjutsu skills deliver punishment to enemies. You can even switch elements with ATB and keep combos going making battles a rhythmic dance of damage and defeat. Nailing that rhythm is one of the most important things in battle, but once you have it down, few enemies will give you a challenge. 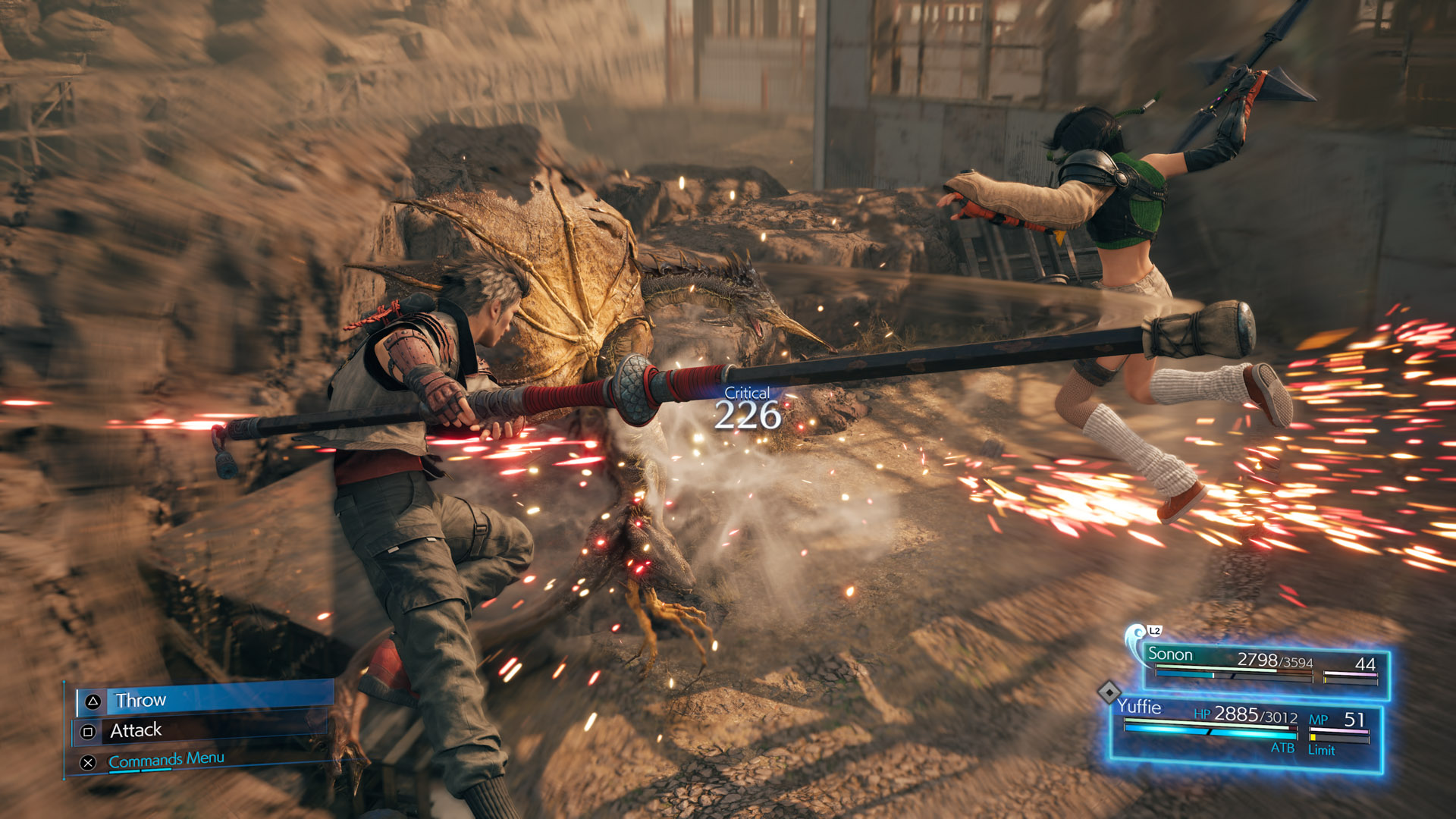 And when Sonon decides to join Yuffie, things really amp up. It’s clear he has a history with Shinra and his entire backstory is tragic, he’s an endearing character brought to life by Aleks Le. He is a loyal ally to Yuffie even in the short time they’ve known each other and he will always stand for what’s right. It’s an admirable trait that translates into battle well. He’s a powerful and dependable ally and a bit more experience in battle. This shows in his movements and how he supports Yuffie in battle over the duration of the expansion. He isn’t controllable unfortunately but you can issue him commands and he works well alone. 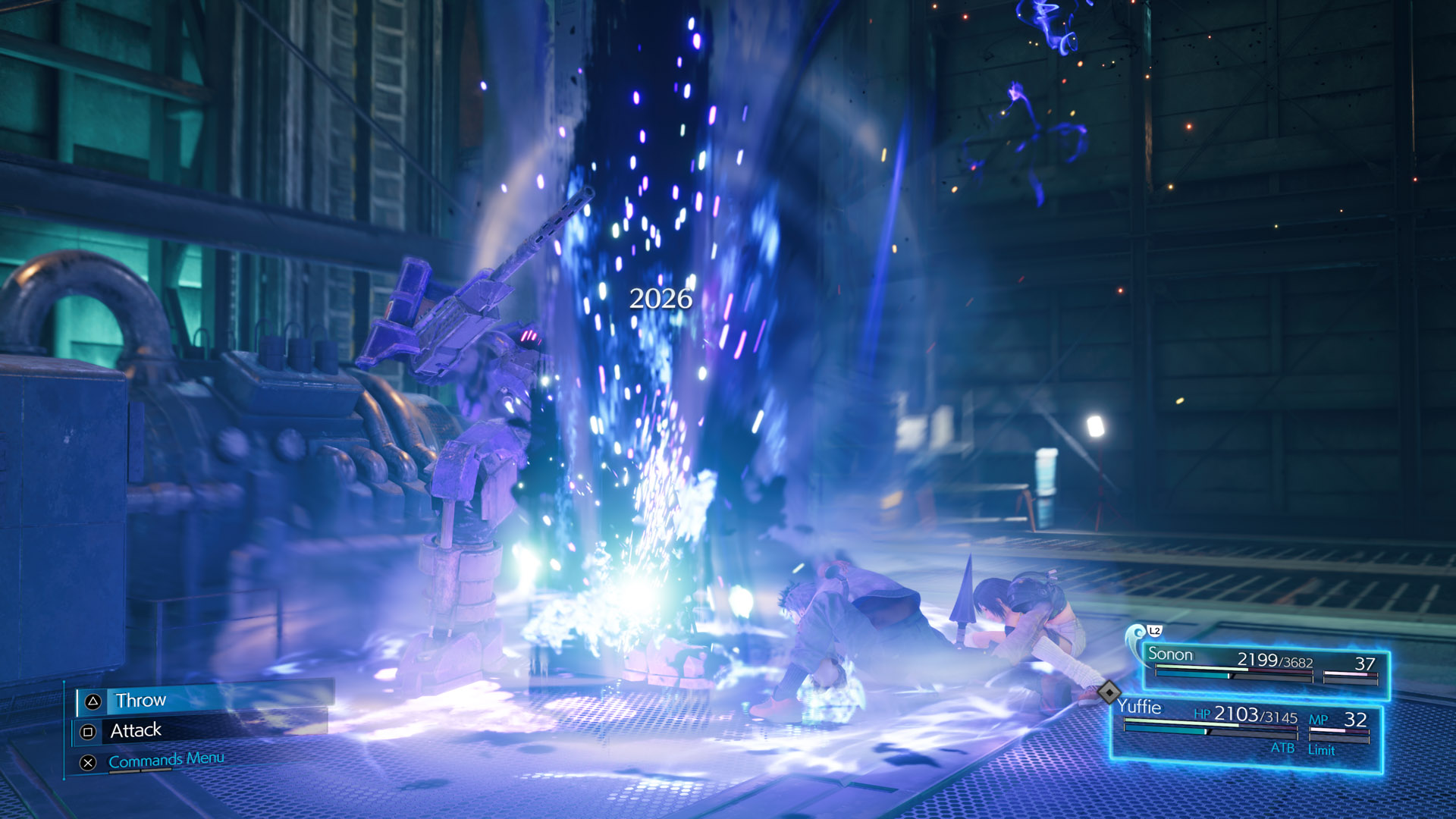 Something I’d like to see continue in future entries in the new Synergy mechanic. It’s a huge game-changer for combat, adding a layer that makes battles even more exciting. Trigger Synergy with L2 triggers the pair into attacking together. This system allows the pair to stagger enemies easier, while also dealing more damage but at the cost of Sonon’s ATB charging much slower. It’s a great risk vs reward system.

Square’s Yuffie expansion is a wonderful addition but it certainly feels like side content. INTERmission is a short expansion that retreads a lot of locations while adding some new ones around Midgar. That’s not bad per se, but it makes this feel lesser than it should. Midgar is massive and we’re stuck in the same areas as the main campaign. Paired with the fact that while the story is good, it’s really the finale that makes a splash. 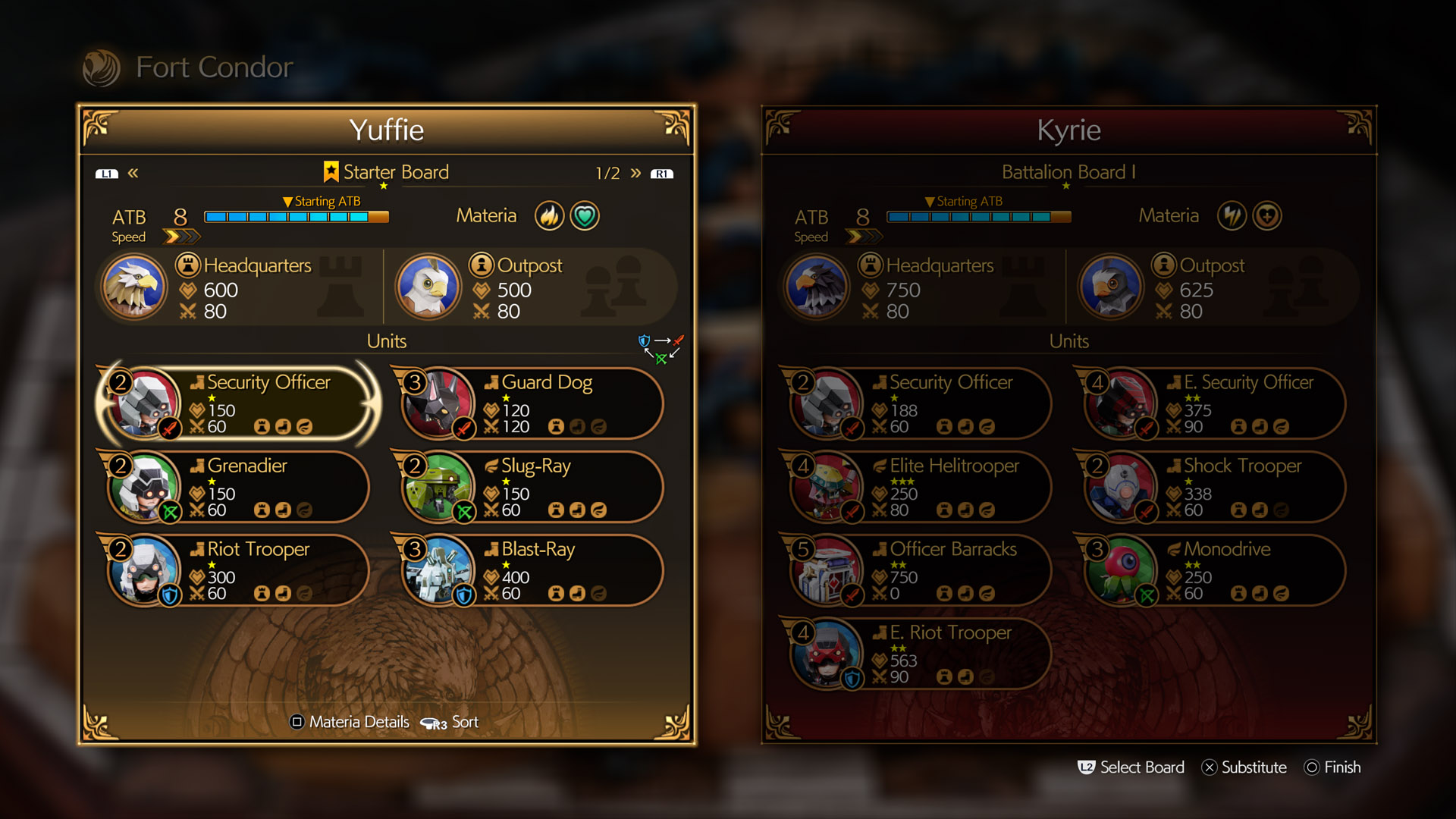 What softens the blow though are things like the battle simulator and the brilliant Fort Condor minigame. I loved Fort Condor in the original Final Fantasy VII and Square Enix smartly turned that into an in-universe board game residents of Shinra are obsessed over. 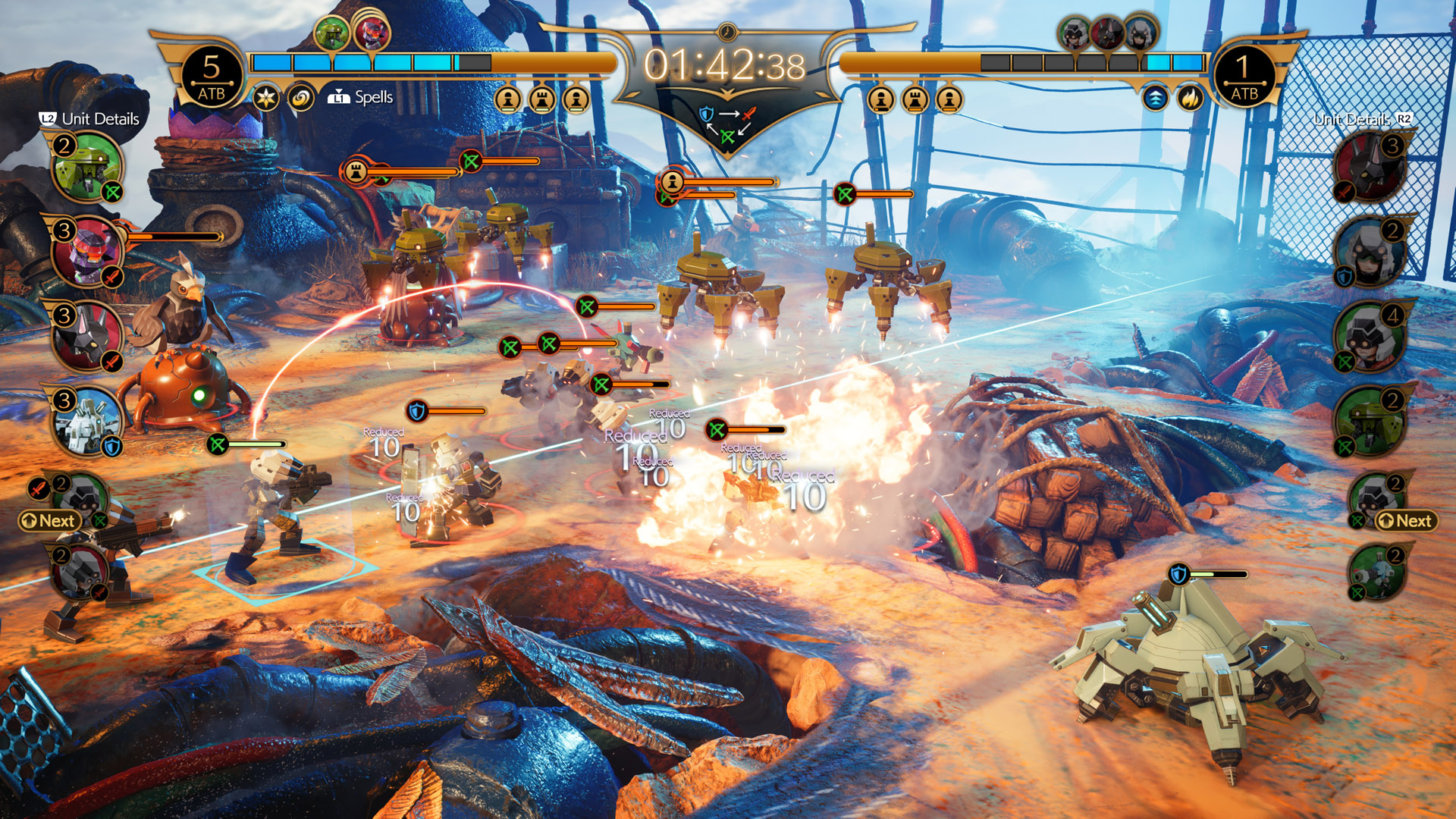 You command several units against your opponent in what is a rock-paper-scissors approach. Your main goal is to either have majority control of the game board before the timer runs out or effectively wipe out the other player’s three main pieces. You begin by choosing your board and individual pieces, then deploy them to attack the enemy. It’s a simple game and I spent more time playing it than I should mention but you can face Roche and become friends with him over Fort Condor. You’ll also find new pieces and earn them by defeating others, adding to your repertoire of Fort Condor boards. 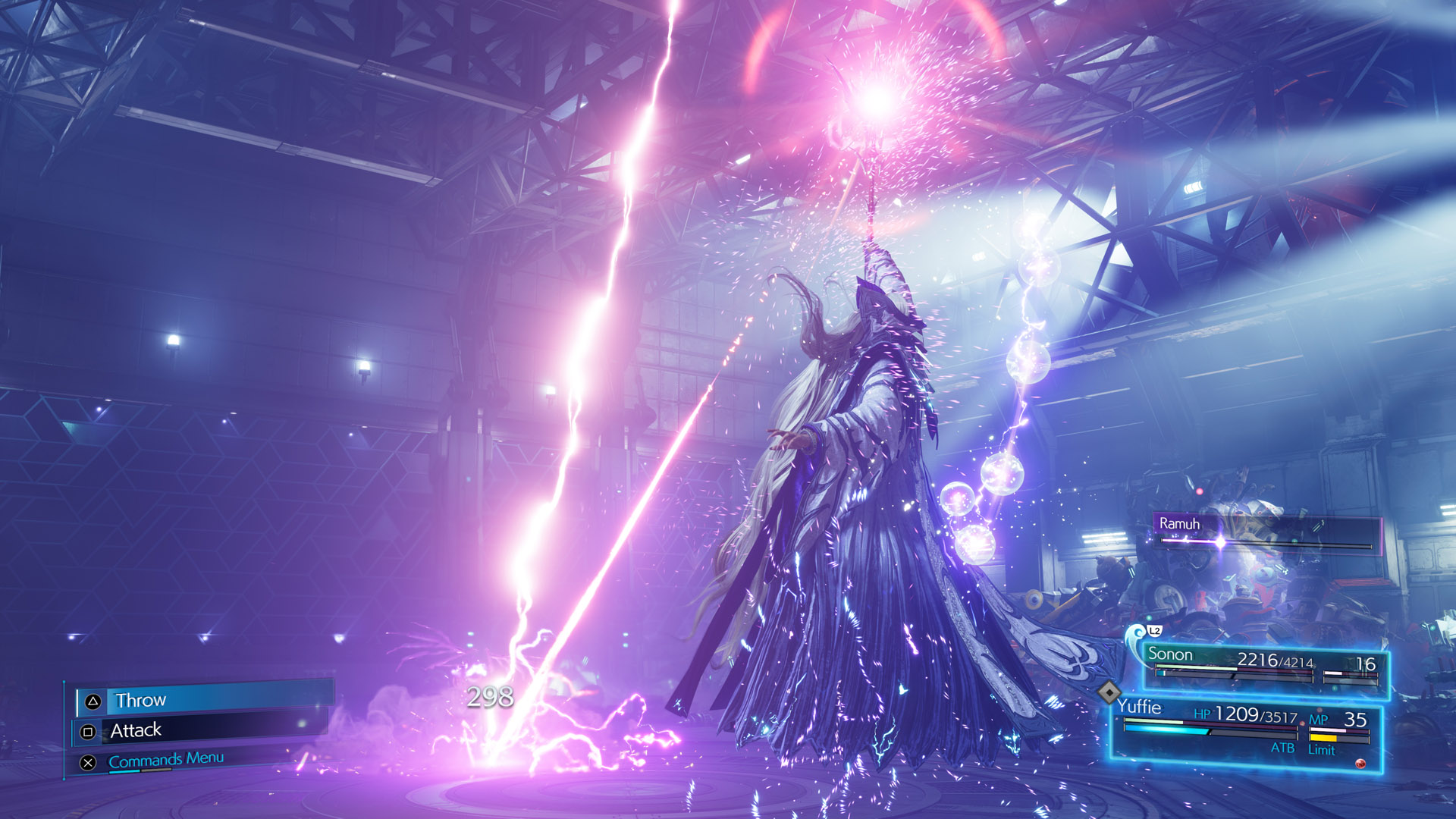 I remember when Japanese video games were generally horrible ports on PC. Over the years the situation has gotten better, but there are some instances when it’s disappointing to see the lack of care for PC players. Some ports like Monster Hunter World and Final Fantasy XV Royal Edition fared well but then you get something like Ninja Gaiden that’s not only disappointing but also disrespectful.

Final Fantasy VII Remake Intergrade plays decently on PC and falls somewhere in the middle. It’s clearly better than the PS4 version but not the PS5 version. It’s optimized and runs well on my Intel i5-8400 CPU with 16GB RAM and an Nvidia GTX 1070. I can get a solid 1440p and 60 FPs on high settings with no noticeable slowdown.

However, those who have newer hardware and components might be a bit disappointed. There are very few graphical settings to choose from and you have to pick between 30 FPS, 60 FPS, 90 FPs, or 120 FPS. If you’re a dedicated PC gamer, then you might not get the experience you’re likely used to getting when playing video games. There are no toggles for anti-aliasing or the ability to disable V-sync.

And if you have an ultra-wide monitor you can’t use it as it was intended since Final Fantasy VII Remake Intergrade is locked at 16:9.

Final Fantasy VII Remake Intergrade is a great quality of life improvement to the base game that offers a wealth of upgrades. It is easy to recommend one of the best games of 2020 to anyone looking to experience their first Final Fantasy or wanting to see how the original compares to the remake. The real star, of course, is playing as Yuffie Kisaragi in INTERmission the expansion that is exclusive to PlayStation 5. The technical enhancements make this a shining example of the console’s power but it’s the new lore and story the expansion offers, teasing what’s to come is enough to keep me invested until the next trailer comes around.