I remember seeing the trailers and thinking how cool Final Fantasy Crystal Chronicles was going to be. This was back in 2004, just as Square Enix had merged and the franchise at the time was more stringent in the games being released under the illustrious Final Fantasy umbrella. I got about halfway through the game before having to return it to my local Blockbuster and I never had the chance to finish the game. Upon hearing that a remaster was planned, I knew I had the best shot at finally finishing what I started all those years ago.

However, not all games resonate well after taking those nostalgia goggles off and, in this case, it’s best you don’t even try to take them off. That said, the story behind Crystal Chronicles is good and simple to follow.

Players will use their caravan to travel the world, which is currently covered in a toxic mist called miasma caused by a meteor. To keep the miasma at bay, players will travel the world called myrrh, a dew that empowers the crystals of the world. Each year, a brave caravan must embark to collect myrrh to recharge the crystals to ensure their survival. Sounds like a great premise, right? In theory, yes, it is. In execution, Final Fantasy Crystal Chronicles stumbles to tell a story worth revisiting.

My life as a Caravanner

Final Fantasy Crystal Chronicles begins with the option to pick one of four races – Clavat, Lilty, Yuke, or Selkie, then you fill in their backstory. In the beginning, your caravan is from the small village of Tipa and you’ll need to venture out to obtain myrrh to help power a purification ceremony that occurs once a year.

Your task is to dive into dungeons and collect the illustrious myrrh for the village, rinse and repeat. For one, the shortcomings in the narrative center around the fact this is meant to be a multiplayer affair. Back on the GameCube, the game was intended to be for up to four players, each using the Game Boy Advance and a link cable, in 2020, that’s no longer the case. Instead, what you’ll need to do to play with others to make the mode available online for four players to start at any time. The developers at Square enabled full crossplay across PlayStation 4, Switch, iOS, and Android. 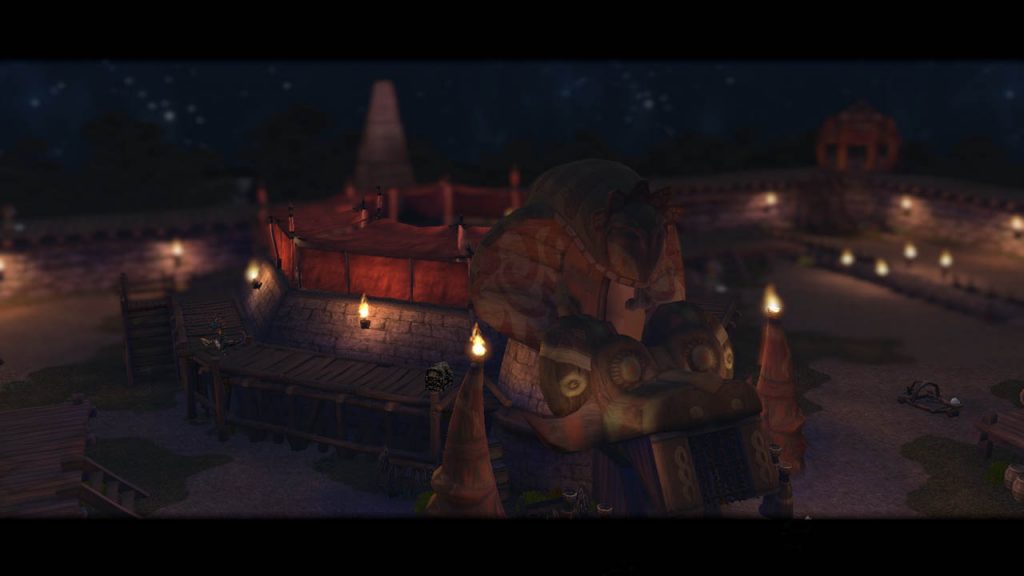 However, to even get this to work is a nightmare and Square Enix removed local multiplayer. Besides, multiplayer is region locked and as I type this review, I’ve yet to be able to successfully connect to anyone to test out multiplayer. I’ve spent several days with Final Fantasy Crystal Chronicles Remastered and I’m at a loss on what to do – I’ve tried troubleshooting with no success.

To make matters worse, Square uses a code system that makes me scratch my head, with the code you send out to friends including a 30-minute expiry called a One-Time invite. You can also add friends permanently through a longer friend code or by looking at your log of people met. I’ve tried to get myself invited via the app on my iPad and through a random Android tablet to no success.

Being a remaster of an old game means that while the graphics have been finetuned for new hardware, it doesn’t nearly look as good as I’d hoped. Cutscenes are randomly doled out and include weird mouth flaps to the scenes you’re watching. Everything unfolding on the screen is rigid and the animations are a relic of older times, and to cap it all off, Square Enix has included a voice-over for the game (something the original didn’t have) and it is serviceable but barely necessary. In the end, the remaster feels barely functional and it shows how some games should stay in the past. 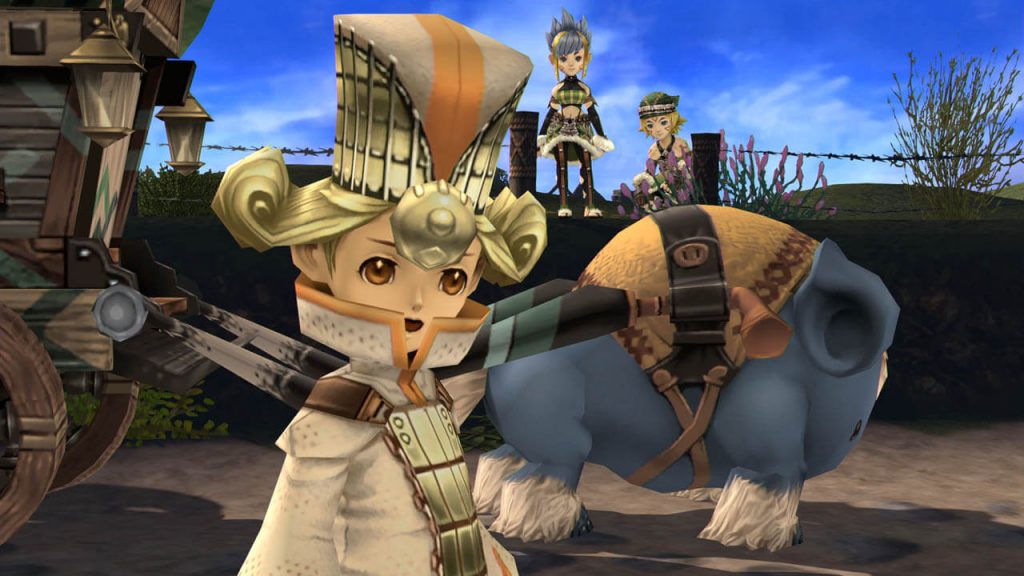 Incidentally, the story unfolds annually. Each year includes several dungeon dives into miasma-enclosed depths to collect myrrh. Since you’re only one caravan, encountering others working towards saving their villages often includes minor vignettes, you’ll see others struggle just as your tribe. At the end of collecting enough myrrh, you return to Tipa and watch for the next year to begin before setting out to more dungeons.

Furthermore, you’ll be making return trips to each dungeon. Myrrh is a limited commodity and replenishes every two years before the myrrh tree replenishes. To add to that, the dungeon increases in difficulty and in sometimes unveils new areas to explore, and even new monsters to discover. Each dungeon comes with three difficulty levels and you’ll find new treasures within each time. Thankfully, the scaling design works well and its even fun to return to challenge stronger monsters. 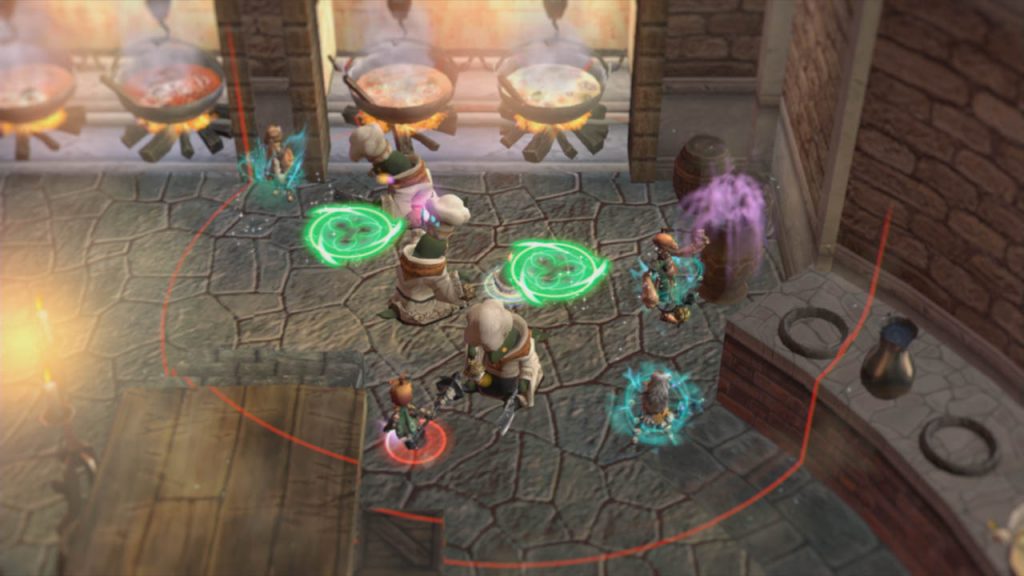 Combat takes place in real-time throughout the game and players can freely move around the environment. Battles are simplistic and often you’ll need to watch the enemy before striking them, backing off and repeating the loop. On PlayStation 4, X attacks, you can also swap and cycle inventory with both L1 and R1. Everything feels dated at this point and the translation from GameCube to new consoles doesn’t come without growing pains.

Furthermore, to even level up you’ll need to earn artifacts in dungeons. Instead of the familiar passive systems, you’ll find in most RPGs, Final Fantasy Crystal Chronicles Remastered does something different and I don’t mind the way it’s done. However, just like most things found in the game, there is a ton of repetition that holds the experience back. Every dungeon offers several artifacts to level up your characters’ strength, magic, or defensive stats. 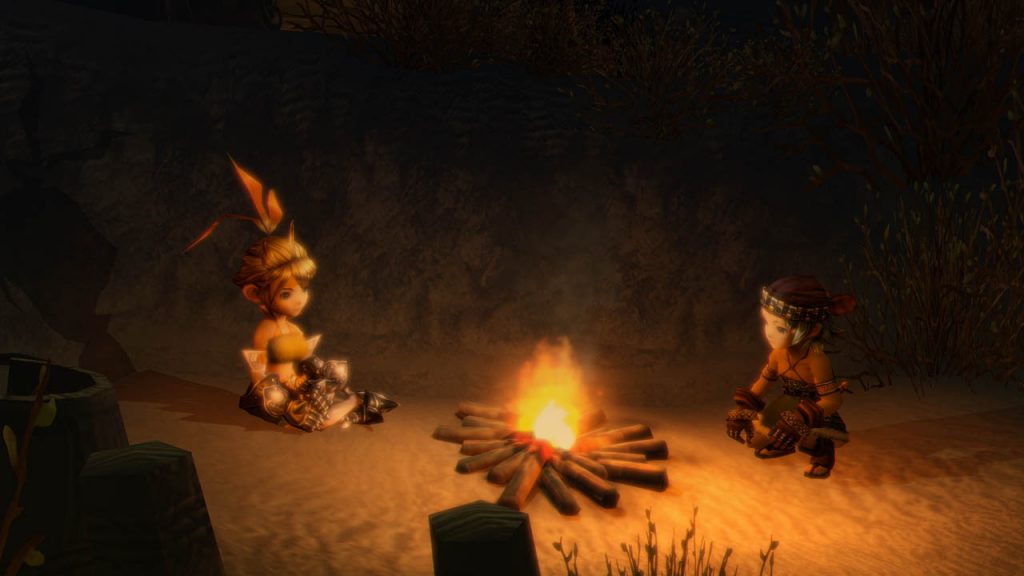 Final Fantasy Crystal Chronicles Remastered is a hard sell. I went in expecting a decent experience with some updated visuals, and UI refinements but what I got was a game firmly stuck in the past. The story is serviceable and is a device to gather four players to dive into dungeons and explore together. None of the functionality works for me, and the “reworked” multiplayer is a huge bust on PlayStation 4 Pro. On top of that, loads times are far longer than they should be and playing this game feels like a chore. Final Fantasy Crystal Chronicles Remastered lacks the makings of a great game and comes up short in several aspects. It’s hard to recommend the game as it is which is a shame because the concept is sound – it’s the implementation that nosedives the entire experience.