Deck builders have flooded the market since games like Slay the Spire emerged and won over millions of hearts and minds. To put it simply, you move from enemy to enemy, region to region, and build a card deck to tackle future foes. It’s a basic concept on the surface, but Fights in Tight Spaces is the latest in the genre and it puts you in the shiny black shoes of an assassin and throws some cool new ideas in the mix.

Pick A Card, Any Card

Fights in Tight Spaces is exactly that; you fight people in a tight space. But like any deck builder, the luck of the draw is a big part of the game. The cards you’ll see here are movement or melee-based and range anywhere from a simple jab that inflicts minimal damage, to a split jump kick that will do strike enemies on either side of you.

You’re also fighting within a grid and turn-based system. This brings a lot of dynamic and turn-by-turn scenarios that other games in the genre don’t typically offer. The system in Fights in Tight Spaces does away with mechanics like mana or magic and instead replaces it with momentum and a combo meter. Each of these is critical to creating a more successful encounter that can either negate damage, counter your enemy, or damage them in the most effective and brutal fashion.

Beating up a biker gang or protecting an informant doesn’t seem like the most strategic thing in the world, but that’s exactly what this game is. As fun as it might be to bust in and do away with the baddies quickly, I found myself stopping and thinking about what to do next. What seemed like a simple scenario turned into a cool puzzle I felt rewarded for solving 15 minutes later. 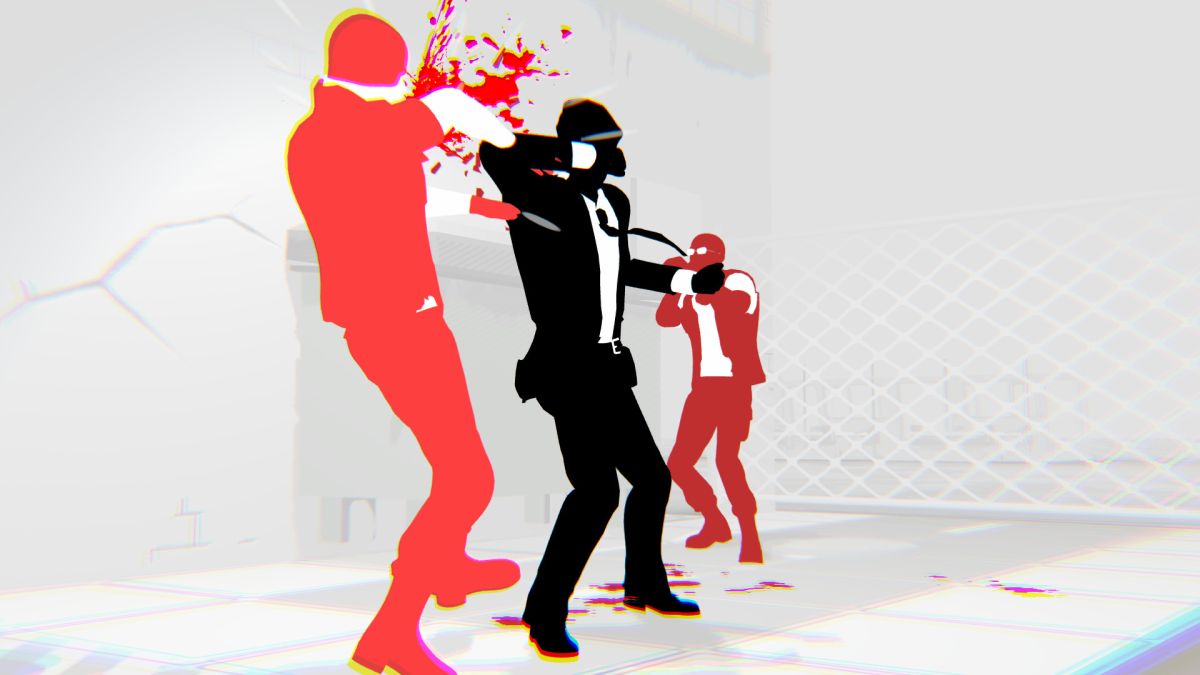 All the cards, the enemies, and the literal Fights in Tight Spaces are dripping with unique style. The minimalistic look from top to bottom comes to life the second you are dropped into a level. Your character is dressed in black, while enemies are shades of red, green, orange, and more. All of this is played out on a white grid level that could be a tattoo parlour, a back alley, a prison cell, a bar, or at least a dozen more. Each area is yours to paint red with the blood from you and your enemies’ punches, kicks and throws.

The levels are laid out across an overhead map with branching paths that let you choose not only the location itself but the number of goons you’ll face, as well as the possible rewards based on your performance. Sometimes you’ll even have a chance to upgrade cards or heal yourself. Fights in Tight Spaces also has rouge-like elements. Expect to fail a decent amount, start a run-over again, and use what you’ve learned and unlocked to be even more badass the next time you face off against that boss who whooped your butt at the local biker bar. 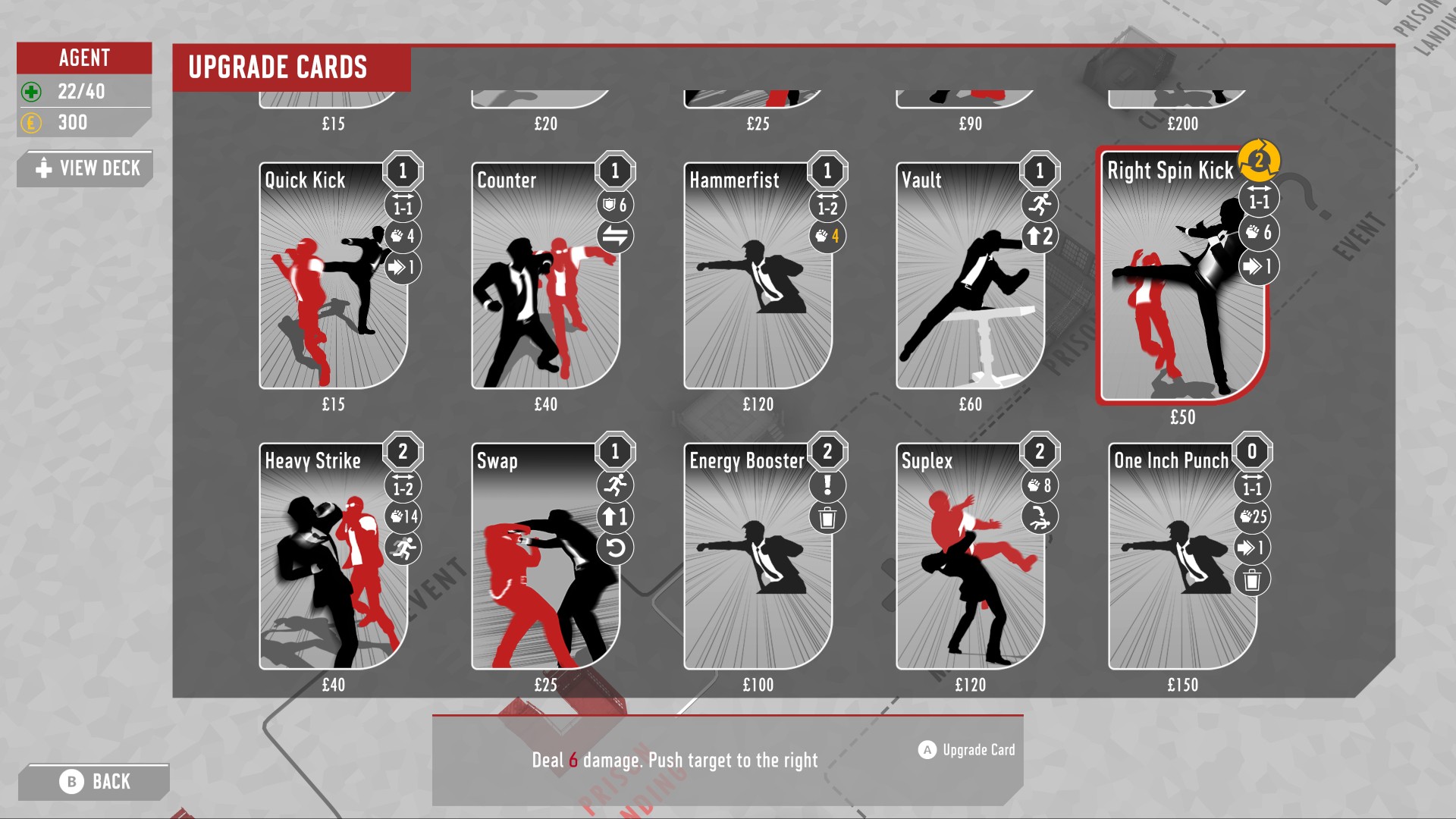 Choice is a big part of any deck builder; which card or move will you keep, upgrade, discard, or add to your deck? Fights in Tight Spaces gives you hundreds of options so picking a pre-built deck or building your own adds tons of variety no matter what run you’re on. You can favour countering attacks, slipping between enemies with movement cards, or why not go full John Wick and be aggressive? Either way, there are tons of cool ways to mow down your colourful foes.

There’s also a clear variety in those enemies. Early on you may face three red goons who simply jab from one square away, but you’ll soon realize there’s much more in store for you. Each opponent is colour-coded and just like you, come with their own dare I say… unique set of skills. What I really appreciated is how the game not only has a clear and concise tutorial but teaches you about new cards and enemies as the game goes on. “Oh, I’ve never seen one of those yellow guys/gals before!” No problem here’s a well-laid-out pop-up to help explain what that means. It’s extra helpful considering sometimes it does feel like the difficulty can ramp up quicker than your deck can handle, stopping your run earlier than expected. 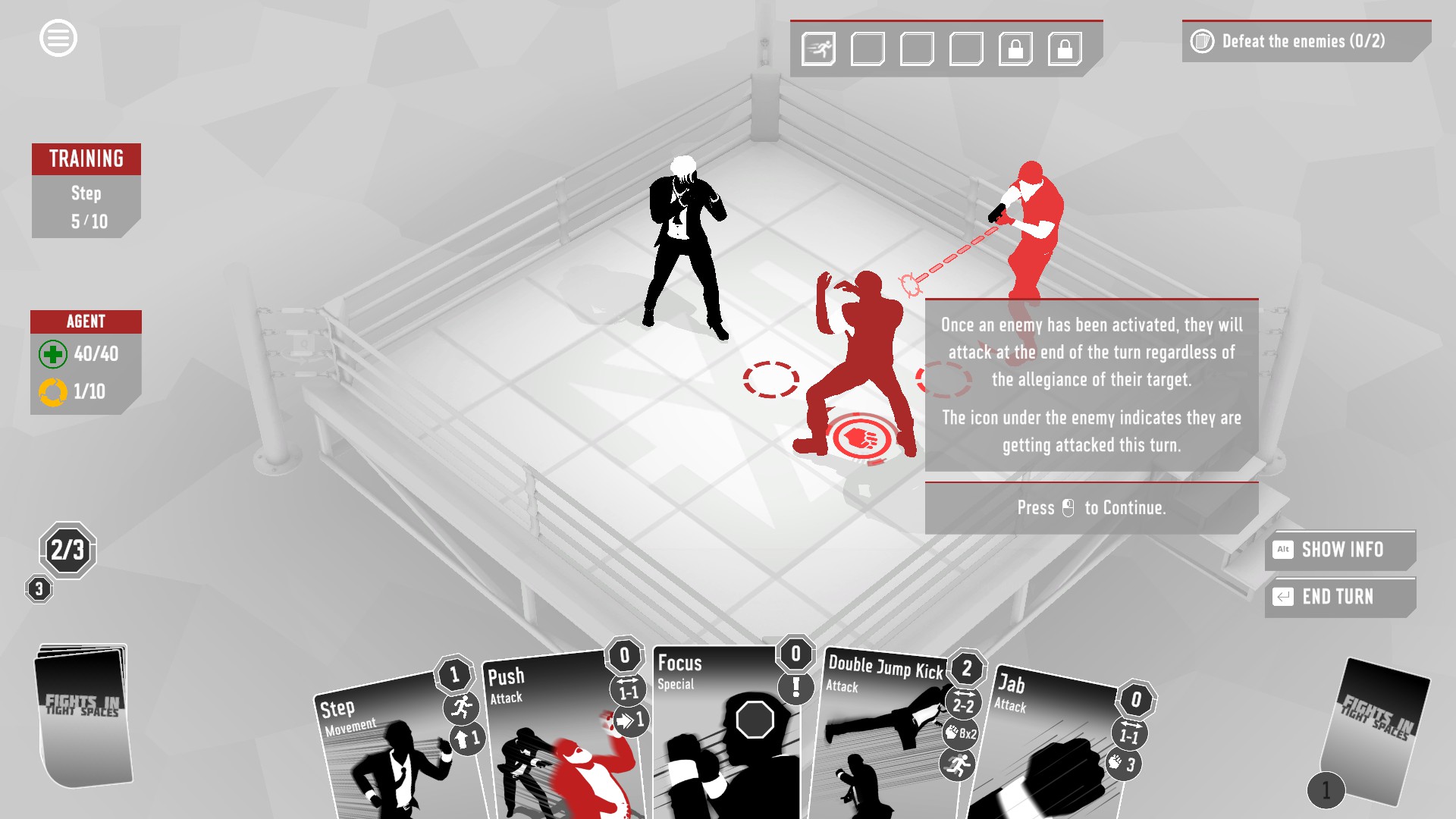 On lower difficulties, if you do lose a fight, you can instantly start again and try a different approach. The only thing I have noticed that breaks the immersion here, is if you do hit restart, enemies not only drop in the same place, you can repeat your moves and the fight you just lost down to the exact card and tile placement. In other words, it feels like the AI is only responding to you and not necessarily trying to outsmart you. In a way that makes the game more forgiving and you can learn from previous mistakes, but on the other hand, it’s also a lot more predictable.

Thankfully at all times, controlling the game is very easy. I played Fights in Tight Spaces on PC, and the mouse and keyboard configuration is essentially point and click, and rotating a camera. On console from what I have seen, it’s not far off and a breeze to get used to.

I’ve had my eye on this title since it was announced and I’m happy to say it was worth the wait. I’ve played countless deck and card-building games over the last several years and with new content on the way, this will likely be one of the select few I’ll come back to. It’s amazing to look at, fun to play, and rewarding each step of the way. Fights in Tight Spaces drops with a unique style and has quickly shot up my list of favourite games from 2021.