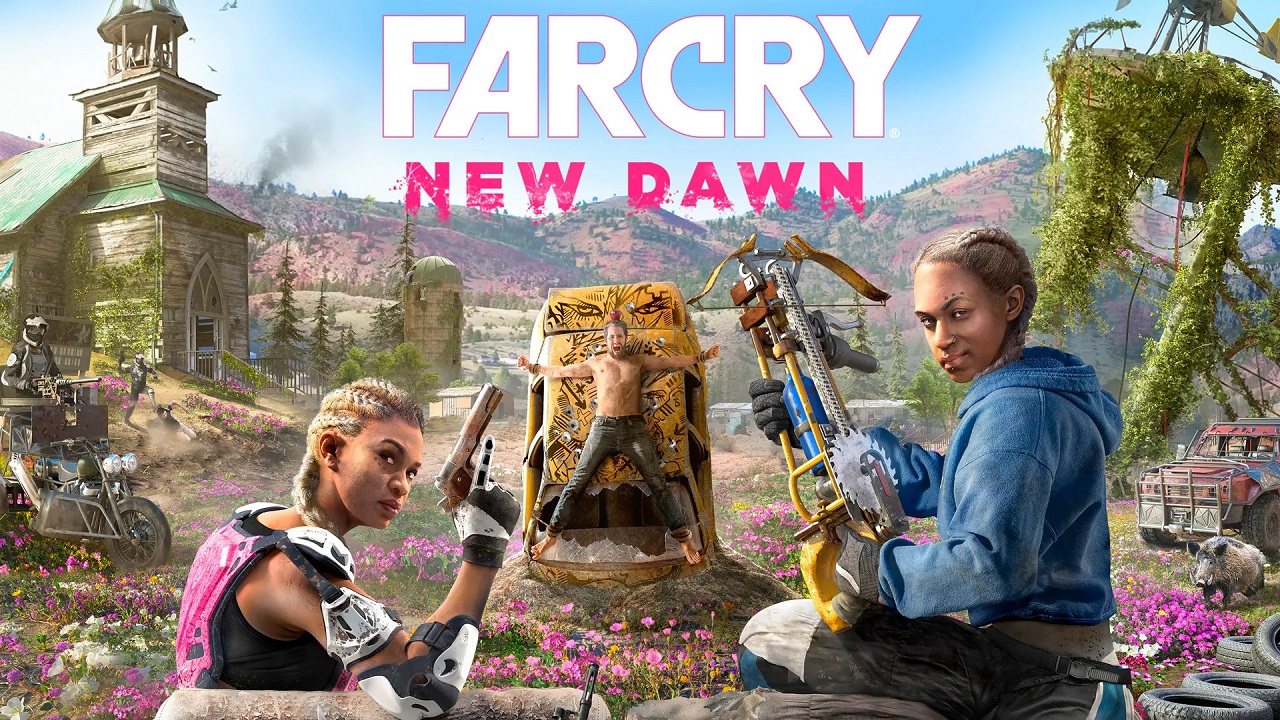 Far Cry: New Dawn takes place seventeen years after the events that unfolded at the conclusion of Far Cry 5. The nuclear fallout left some struggling for survival underground with the hopes and dreams of one day returning to the surface to build a new world for their children. We are introduced to familiar environments that have received a colourful overhaul that looks attractive, but has this new coat of paint been completed to distract you from the reality of a recycled experience from Far Cry 5? Let us return to Hope County together and find out.

You play as the captain of the security team for Thomas Rush, an individual who has gathered essential personnel to reestablish settlements across the United States and usher in a new age of peace and prosperity. His presence was summoned to Hope County by Carmina, daughter of Kim and Nick Rye, but their arrival is welcomed by the notorious Highwaymen who possess a firm grip of power upon the locals through fear and violence. Lead by The Twins, Mickey and Lou, they impede the notion of restoration and ensure chaos continues to be present to ensure a dominance over the masses. Do You Solve Problems, Or Do You Create Them?

New Dawn consists of around thirty story and side missions and twenty one expeditions. Players can fight off the Highwaymen solo, or invite a friend to cause more destruction. The story does not offer much in terms of unique missions as they follow previous Far Cry installments. You will fight in an arena, repel enemies using a mounted-gun, overcome hallucinations, defend bases, and clear enemy outposts. A derby mission had potential as its onset will remind you of the movie Death Race, but it quickly fell short moments after the race started as you can depart your vehicle and utilize your arsenal to destroy your opponents instead of navigating the track.

I was also a little disappointed as the story does not fully embrace the post-apocalyptic time frame. The Highwaymen dress the part, but nothing more. Environments are colourful and vibrant, but they do not fully reflect a post-apocalyptic world as certain areas look untouched and life remains unhindered. Water is plentiful and uncontaminated, vehicles are easily accessible even though ethanol is difficult to acquire, and ammunition is never a concern. These factors result in a loss of an immersive experience that Ubisoft Montreal hoped to create. The Highwaymen’s gear would perfectly compliment a more barren landscape with an impending threat of dust storms that would inflict damage and reduce visibility making engagements increasingly more exciting. Environmental conditions such as these should have been considered given the numerous possibilities available with the post-apocalyptic time frame.

You will visit locations in Hope County that have been transformed due to the nuclear disaster and a sense of deja vu will occur to players who first encountered these areas in Far Cry 5 such as the Fang Center, the bunker, and even the remains of Joseph Seed’s statue. Environments have been coated with vibrant colours that will immediately stand out upon discovery, giving New Dawn the title for best visuals from the franchise. Many familiar faces will also return from Far Cry 5, including the discovery of your rookie character and how the apocalyptic turn of events have transformed him. Clearing outposts continue to offer memorable gameplay moments as the player can strategize their approach and attempt to clear it by means of stealth, or rely on their arsenal to remove the enemy threat by whatever means necessary in open combat. Clearing outposts in New Dawn grants the player ethanol, which is a highly sought after resource and is needed to upgrade the facilities within Prosperity. Each outpost has three levels of difficulty, which will grant you additional ethanol and increase the outpost defense to include elite enemies. If the alarm is raised an enforcer will also parachute onto the battlefield and potentially ruin your success of liberation. These additional difficulty levels not only increases replayability and aids in acquiring ethanol, but it also requires a much more tactical approach to test the player’s combat efficiency. Engaging in higher level outposts should only be attempted once you unlock more advanced weaponry, or your attempts will be met with continual failure.

New Dawn places a heavy emphasis on scavenging for supplies as duct tape, components, and various other metals are essential to upgrading your weapons and ethanol is needed to upgrade facilities within Prosperity. These facilities unlock various benefits such as increased medicinal properties, increasing the use-fullness of hired help, attaining maps to disclose item locations, upgrade weapons and explosives, and to embark on expeditions. It is also very important to unlock the expeditions facility early on as it grants the ability to fast travel to outposts and locations that you have already visited. The arsenal of weaponry includes what we would expect to see in a Far Cry release, but improvised weaponry such as the saw blade launcher adds an overly enjoyable aspect to killing off Highwaymen as the blades will bounce off surfaces and cause immense damage to groups of enemies. Perks play the same role as they did in Far Cry 5 where completing challenges will grant you tokens that can then be used to acquire new skills to aid you in combat. It is recommended to unlock the additional weapon perk early on to increase the amount of weapons you can carry and the ability to pick locks will grant you additional valuable resources as you scavenge for supplies. You will also acquire perks towards the end of New Dawn that offer new and exciting gameplay mechanics that you will wish you had earlier on.

You Are Going On An Adventure

Expeditions adds new and refreshing gameplay that is quite enjoyable. Each expedition drops you off to a new location around the United States where you must retrieve a package and then arrive at the extraction point while fending off waves of countless enemies while waiting for your helicopter to take you to safety. Like outposts, expeditions features rewarding gameplay and the difficulty can also be increased, which will grant you additional rewards that will aid in unlocking more powerful weaponry.

Rabbit In The Hole

The twins, Mickey and Lou, are the leaders of the Highwaymen and they continue to embody the persona of a ruthless villain that is known to be featured within a Far Cry title. Your presence in Hope County infuriates them as you continue to create problems  around every corner as every action reduces their power and control over the area. Their currency is power and your continued successes make them look weak. Each twin compliments one another as one rules through acts of physical violence whereas the other attempts to rely on threats and reason before handing the situation over to her sister. At one point we see them arriving at Prosperity to issue a warning that they will return and kill everyone before giving a child a live grenade to hold in order to instill fear in the community.

The final showdown against the Twins resulted in the most difficult, memorable, and rewarding boss battle within a Far Cry release. Previous installments had over simplified encounters that ended quickly and left us disappointed to the villains not living up to their name. However, this is not the case in New Dawn as the Twins fully embrace every threat issued and give you the fight of your life.

Looking To The Future

New Dawn continues the chaotic warfare that the franchise is known for, offering players a look at a post-apocalyptic Hope County and how the environments and characters have undergone alterations to cope with their new predicaments. While the story offers no new unique missions, the ruthless Twins present several memorable encounters, highlighted by the final showdown against them. The addition of expeditions also add refreshing new gameplay moments that will keep players occupied as they fend off waves of Highwaymen. Far Cry: New Dawn is recommended as it offers up around twenty hours of content of what we would expect to discover within a Far Cry title.