As is familiar with previous Far Cry installments, the villains, explosive action sequences, and the visual beauty of both environments and a destructive nature, are the focal point of every experience. The same can be said with Far Cry 5 as a doomsday cult rises to power and threatens the very existence of all inhabitants. You alone possess the capability of cleansing the land of this threat with an arsenal of weaponry and vehicles at your disposal making the environments one large playground of death and destruction. Welcome to Hope County, Montana.

Far Cry 5’s story begins with a team being sent into the heart of a religious militia community called The Project at Eden’s Gate where you are tasked with bringing their leader, Joseph Seed, into custody and transport him to answer for the crimes he has committed. It is here we first witness the conviction of the cult’s followers and the faith that Joseph Seed places among his members which sets the tone for the entire experience. Joseph’s willingness to comply with his captors is met with a reassurance to his followers stating, “God will not let them take me.” As the helicopter departs, his followers overrun the helicopter by casting their bodies into danger for a higher purpose, forcing it back to the ground to return their leader. Joseph quickly intensifies the situation as he confirms the collapse has taken place and to begin the reaping phase and kill anyone that stands in their way. You barely escape the clutches of this maniacal group and find yourself in the care of an individual named Dutch. Here you are told that no help is coming and that you must reach out to the community of Hope County and start a resistance if you ever hope to see your friends again. 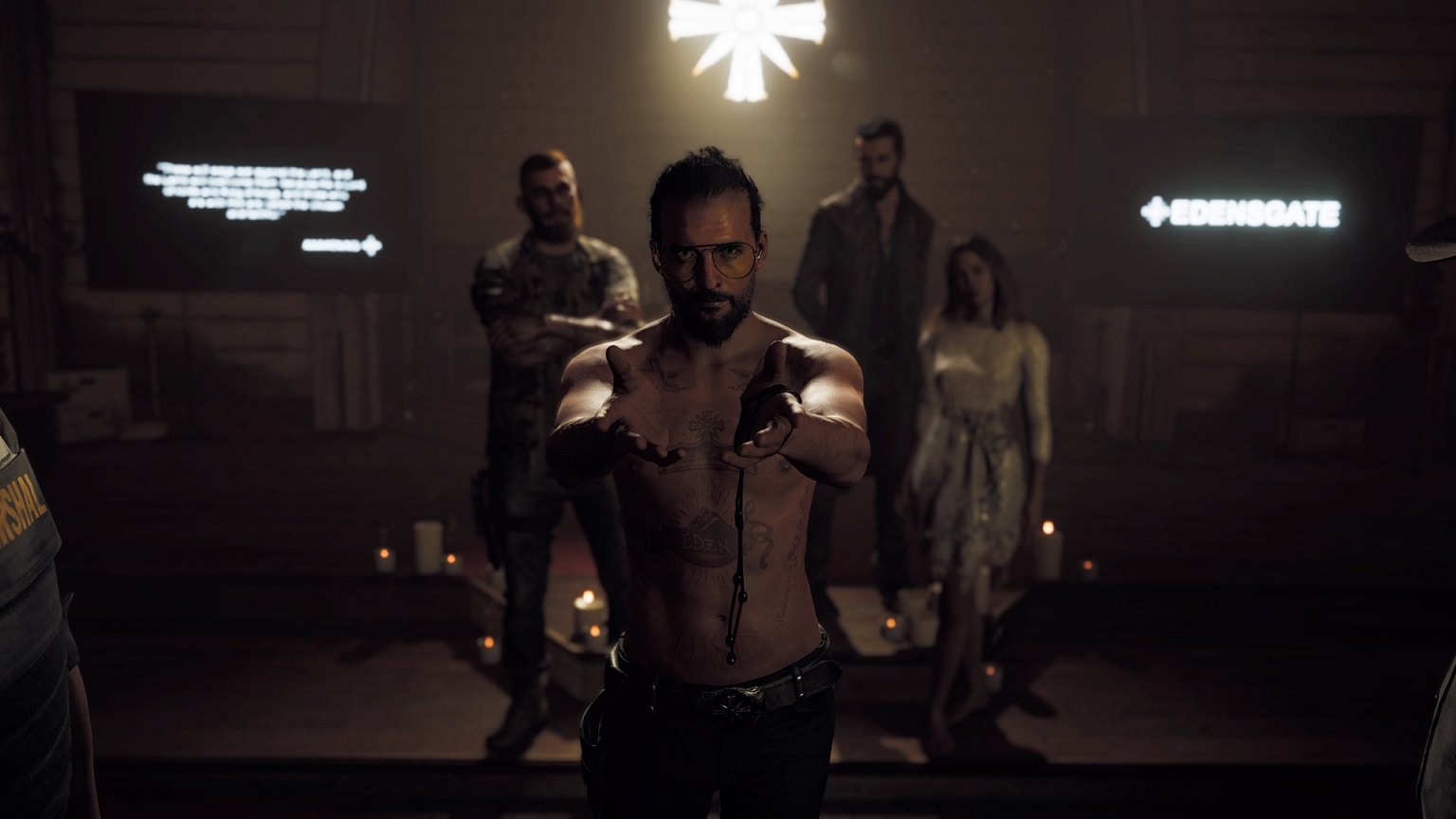 The map of Hope County is divided into three regions, each having one of the Seed family members as the eventual final confrontation upon filling up the resistance meter in each area. This meter is filled by rescuing civilians from the cultists, destroying cult property, completing missions, and liberating enemy outposts. Each final confrontation offers a unique experience, but offers little in terms of difficulty. So much is put into creating the antagonists in every Far Cry title, but boss encounters continue to leave the player wanting a more refined experience.

The approach to unlocking new skills in Far Cry 5 has changed from previous titles as it is now focuses on the allocation of perk points that you attain through completing challenges. These challenges consists of normal activities that you would encounter throughout the game such as achieving a specific amount of kills with each weapon, skinning specific animals, and even travelling a certain distance while using your wingsuit. This new perk system is more accessible to players as it simply rewards players for playing the game. More importantly, players are able to unlock any perk they desire once attaining the required amount of perk points, giving them the utmost flexibility in catering to their own playstyle.

You also do not have to wait long for something to happen in Far Cry 5. You can enjoy the peace and tranquility of fishing while a boat passes by and begins firing while you are mid-reel with a potential record breaking fish on the line. You can be subjected to a strafing run from an enemy aircraft as you attempt to run through a large open field, or encounter numerous enemies on the open road as they travel across the county searching for new members or hostages. One noteworthy encounter took place while stalking enemies in a forest who were escorting a hostage. Before an opportunity arose to intervene, a cougar crept into sight and pulled an enemy to the ground, forcing the other to flee in fear. These unscripted world events creates an immersive atmosphere that makes you believe you are stepping into a real world scenario. 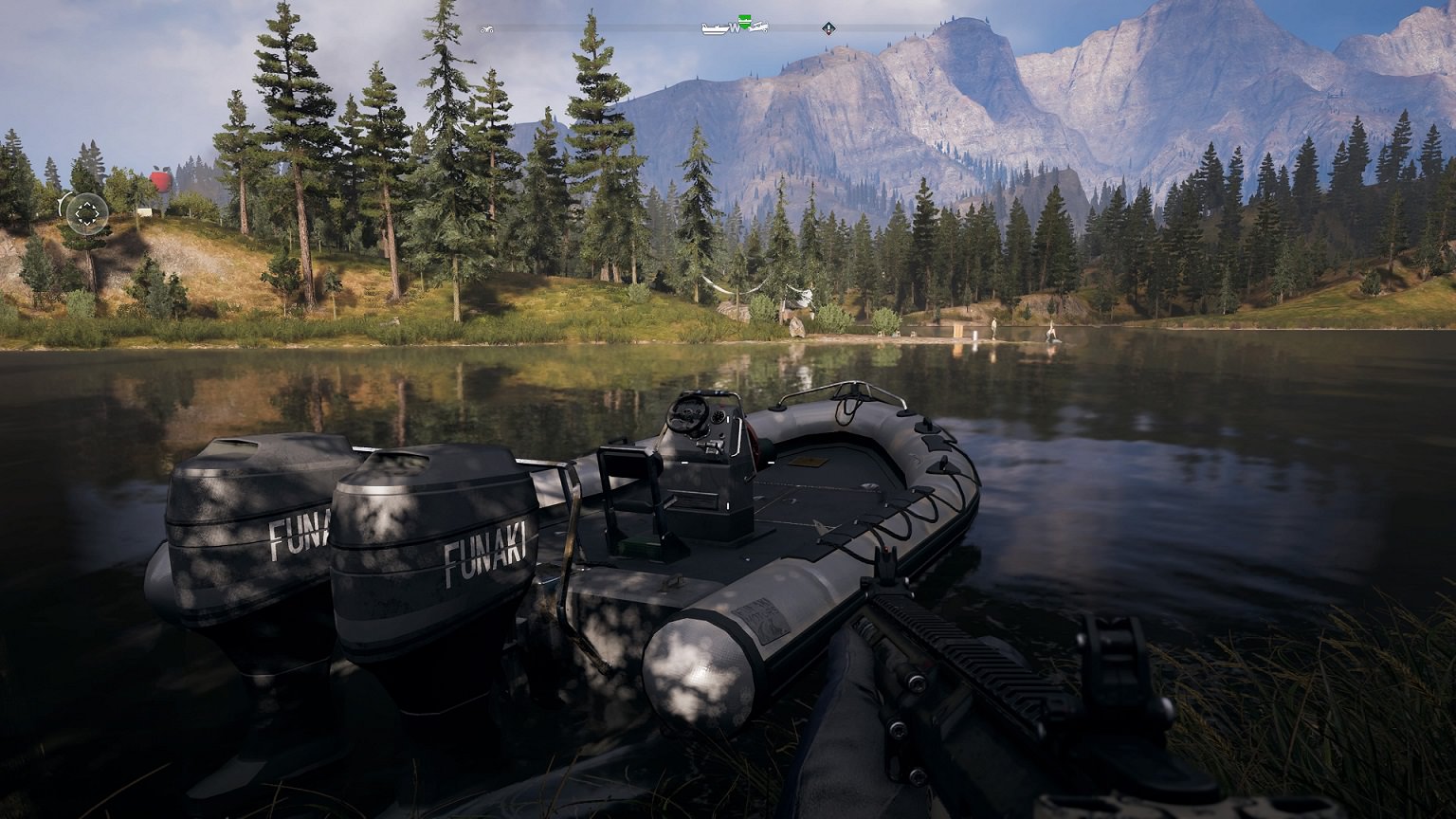 Far Cry 5 is one of the most visually impressive games I have laid eyes upon. Players will constantly find themselves taking in the sights around them as you traverse the environments of Hope County. The level of detail across grasslands, vegetation, mountainsides, and forests is stunning as the lighting system employed brings all aspects to life on a large scale.

A love and hate relationship that some players have had with the Far Cry franchise dealt with the discovery of situated radio towers across environments that, once unlocked, would identify key locations and missions within that area, making progression significantly easier and gameplay more accessible. This departure from radio towers is a significant milestone in game development as the experience is shifting more and more towards an experience as defined by players instead of guiding them step-by-step. The training wheels have been removed and players will choose their own path and pick themselves up after each stumble into the unknown and to learn from their mistakes. This conception is perfect for an expansive world that is known to be featured within the Far Cry franchise as it delivers a memorable open-world experience.

This idea of exploring the unknown is at the forefront of Far Cry 5 as players will not know where to go or what to do until they begin traversing environments and approaching the locals within the area to gather information about missions, which only then will they be displayed on the map. This results in more meaningful progression as players are required to do the legwork in order to discover the starting point of missions. Initial confusion may occur, as it is a step away from previous Far Cry installments, but you will quickly learn the developer’s new direction which will create a significantly more rewarding experience. Missions are about encountering the locals and learning what they have suffered at the hands of Joseph Seed and his band of cultists and how you can restore their community to a previous harmonious state by helping one another. Your actions give each individual the hope that is needed to persevere and take up arms to fight for what they believe in. It is ironic to note that an area known as Hope County is in desperate need of a restoration of hope. 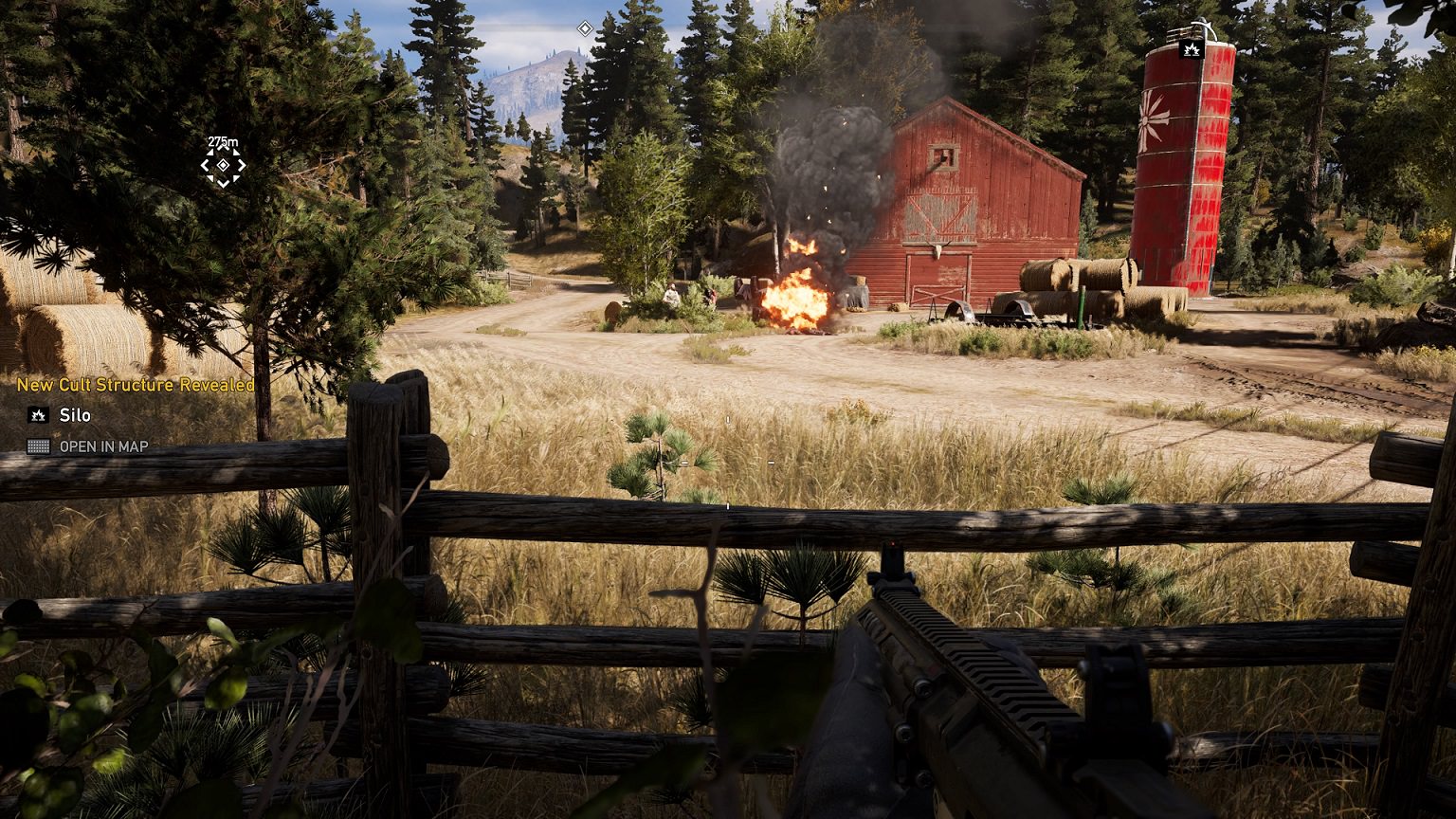 It is this sense of community and the idea of receiving help after providing assistance of your own to the locals is at the core of the Guns for Hire system. Players are able to recruit AI companions to charge into the fray with, giving you an advantage to distract enemies as you make a stealthy approach, or to have another weapon by your side as you enter an outpost seeking judgment of your own. There are also several battle-hardened specialists that can be unlocked who have their own specific benefits to offer. This varies from long-ranged precision shots of a sniper, stealthy removal of enemies by a hunter, calling in air support from a pilot, and tearing enemies apart as a cougar or bear. It is fun to cycle through the specialists to see which helping hand best suits your desired playstyle. A perk can also be unlocked granting the player to have two companions at their side, leading to even more chaotic experiences. Players can now also play the campaign cooperatively in its entirety, unlocking the creative potential for destruction on even a larger scale than imagined. 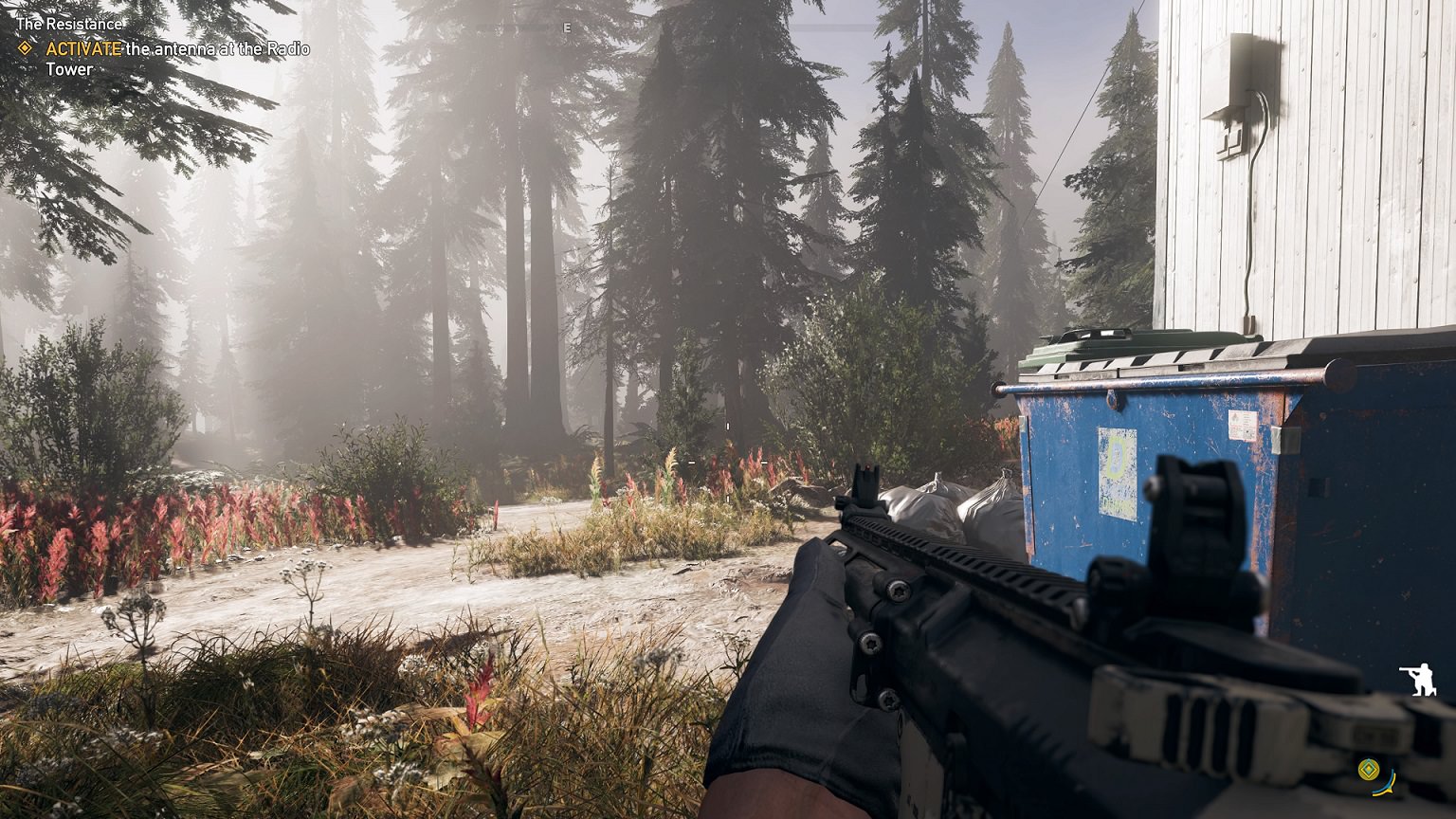 Gameplay is as chaotic as one would expect to discover in a Far Cry title. There is so much happening at all times that you can easily find yourself distracted and losing sight of the mission you initially set out to complete. This is in no way a bad trait to possess as we want countless sequences to wreak havoc on enemies with the multitude of weapons, vehicles, and companions that are at our disposal. Money is significantly more difficult to attain in this installment and players should rely heavily upon fishing and hunting to acquire riches to unlock different weapons and vehicles through the appropriate stores situated throughout the world. The inclusion of flying planes did, however, feel underwhelming and not as refined as it should. Crafting has also been reduced to making explosives and a few buff potions from the weapon wheel. Replayability continues to be a defining feature within Far Cry 5 as there are numerous options at your disposal. The Arcade map creator will also keep players entertained by letting them become developers and enjoy new single player, cooperative, and multiplayer content once they have concluded the main storyline.

Far Cry 5 offers countless hours of fun through chaotic, non-stop action gameplay, while ridding Hope County of the cultists that plague the land. Players will welcome Joseph Seed as the latest character into the franchise alongside the most notable villains, Vaas and Pagan Min. A lot of filler has been removed from previous installments to offer only the best design aspects that everyone has come to love, resulting in a much more polished experience. It is very exciting to see Ubisoft continually looking for ways to improve the Far Cry experience and I cannot wait to see what the future holds for the franchise.