Feels like I’ve been on a God of War binge as of late with my replay of the 2018 game on Steam Deck and the huge release of its recent follow-up which feels like the style of gameplay continued into my playthrough of a little game called Evil West. When I picked up Flying Wild Hog’s latest game last week I instantly felt like I was in familiar territory as Evil West feels like a marriage of God of War 2018‘s gameplay with added gunplay inside a Soulborne difficulty-like shell and an alternative history world similar to The Order 1886.

God of War-like Gameplay But With Guns 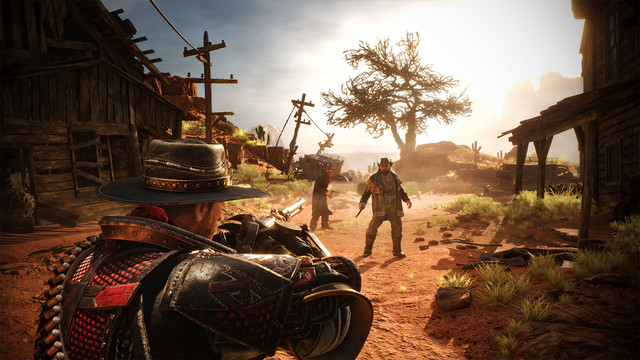 Alongside all that I also felt more of that mysterious 3rd person PS3/Xbox 360 energy when I started playing Evil West as I didn’t really know what I was going to get when I boot it up. Evil West is a much shorter experience that you can beat in under 15 hours, it delivers fantastic modern God of War-like over-the-top combat as I mentioned but with a secondary focus on gun combat that evolves over time as you dive deeper into the campaign. What you’re getting in this title is a much more linear game as each of the 16 chapters inserts the player for the most part into a new setting to explore. Along the way, you can pick up collectables including items relating to the world’s lore, money, new weapons, upgrade plans, and more. Each chapter can be completed in 40 to 55 minutes bringing the total playtime between 10 to 15 hours so no worry about Evil West being a time sink.

The story of Evil West takes place in an alternate 1895 and inserts the player into the shoes of Jesse Rentier, an agent of the Rentier Institute which is a secret organization funded by the US government to protect and defeat supernatural creatures. Evil West kicks off in the most western movie way as Jesse and retired agent Edgar Gravenor are chasing a train just before blowing up remote-detonated explosives. The two are seeking out Chester Morgan, a vampire with the intel they need but in the train’s wreckage they meet resistance in the form of the vampire’s minions, this first chapter serves as a tutorial section. 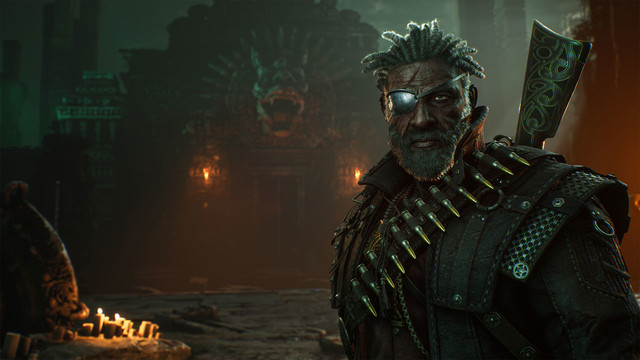 A Last Ditch Effort for the Vampires

After finishing off the last of the enemy character, the two agents find Chester who begrudgingly agrees to tell them what they know which is where is Peter D’Abano’s exact location. Their target is a high-ranking vampire who is one the last of his species that is pushing for war against humanity, it’s a last-ditch effort before humanity mass produces the technology that will give them an actual upper hand in battle. The vampiric council denies this request as Jesse fights the creature of the night in his monster form which will test the player’s skills and strategy before decapitating his head and taking it back to headquarters. After you get back you report to your father, William Rettier and you finally get your gauntlet, which is the technology I previously mentioned – this new tool gives you access to new lightning powers and the ability to break glamours to reveal where vampire characters are hiding. 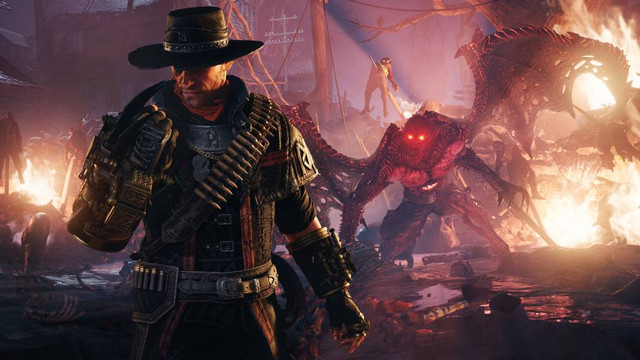 Afterward, this is where Evil West’s story kicks up a notch, during a US Government presentation of the Gauntlet, Peter D’Abano’s adoptive daughter, Felicity D’Abano attacks the Rentier Institute by crashing a Zeppelin filled with monsters into it which result in a lot of death, Felicity infecting Jesse’s father and escaping the attack while on their way to another cell of the institute in a pretty horror movie way. Overall the story of Evil West isn’t the best but it’s good enough as it serves the gameplay. However, there are a lot of fetch quests post-escape that take you to a lot of locations that at times progress the emotional beats of Jesse.

Gauntlet Powers Give a Tease of The Flash’s Speed

Honestly, the gameplay of Evil West is easily my favourite part of my time with it feels right off the heels of the recent God of War game feels very inspired in the beginning but as I went through each chapter, the more I felt it tried to shine on its own. The added gunplay of revolver, rifle, crossbow, machine gun and other weapons adds enough to give players some additional strategy and is overall snappy in moment-to-moment gameplay. Evil West also features a unique set of enemies to fight including human characters that are familiars to vampires that mutate into variations of creatures you will fight. Most of the time in my playthrough anyway going mano a mano with an enemy in the latter half of Evil West is not advised as it doesn’t do much damage of the time and is honestly a risk, dodge rolling really comes into play in those close moments. 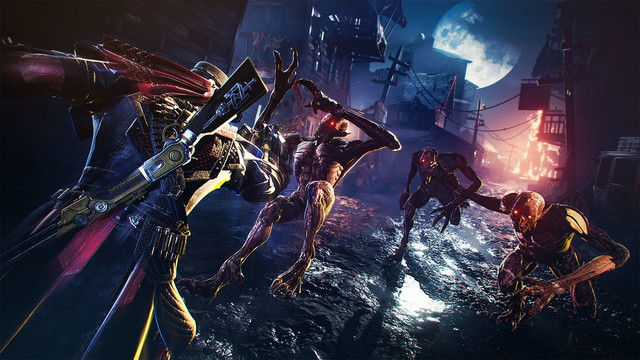 This is where the gauntlet comes in as clutch, your lightning powers really make you feel like The Flash as you can either dash to a regular-sized enemy or bring them close to you in an instant, while all this is going they are electrically stunned for a limited time so no worry of them hitting you back. As for the mid-bosses or actual bosses the player will encounter – this strategy won’t work but this is where my favourite part shined as Supercharged mode comes into play, Evil West’s version of Spartan Rage comes into play where you’re dashing across the screen like The Flash and delivering heavy blows until you run out of juice. To activate this mode you need three fully charged batteries which pop up after you get the gauntlet for the first time and appear below your health bar, you start with four but you can get one additional battery through upgrades.

I don’t want to come across as overwhelmingly positive about Evil West as I do have problems with my playthrough. One of my first major annoyances has to be the mine carts, thankfully there are only two instances of this but in order to get to the next area you ride the tracks on a mine cart. It starts out fine like ‘oh fun Donkey Kong Country cart times ahead’ until you realize it’s not that at all as in order to progress you need either shoot a track switcher or blow up a TNT crate in order to progress. Let me tell you, there was a lot of trial and error (10+ times) to the point I almost got fed up with Evil West, when I got my perfect run I breathed a sigh of relief as I was thankful to get out of that. Another issue is that you can’t backtrack to a previous location, one time I noticed a collectable I missed and was locked out and could only get it if I restart the chapter all over again. In some way, I do get it as Evil West is a linear game that seems to struggle loading assets as you make it to a new section of the map, but not being to jump back over a log to get what I missed seemed silly to me. 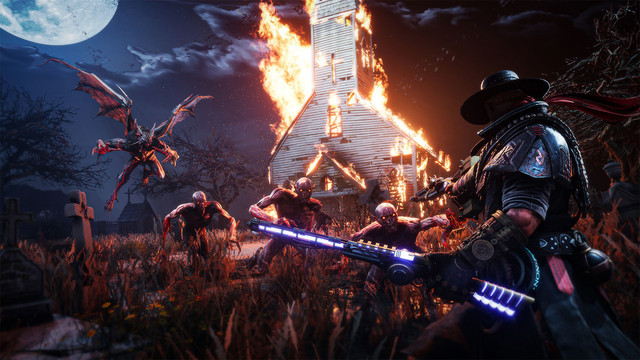 Getting back to what I like about Evil West, I think the rendered cutscenes are incredibly beautiful to look at so much when you head back to playing kt makes it feel seems lesser, unlike God of War Ragnorok which balances the look of gameplay and cutscene pretty well. If you’re someone like me who plays new-gen games and enjoys putting playing at 60 fps, well I’m happy to report that Evil West has a performance mode. The graphic mode inclusion was honestly kind of a shock, only because I thought only the big-budget AAA games had the resources to include and not a AA game like Evil West. It’s honestly nice to see, I do hope to see this pop up more for non-AAA releases. 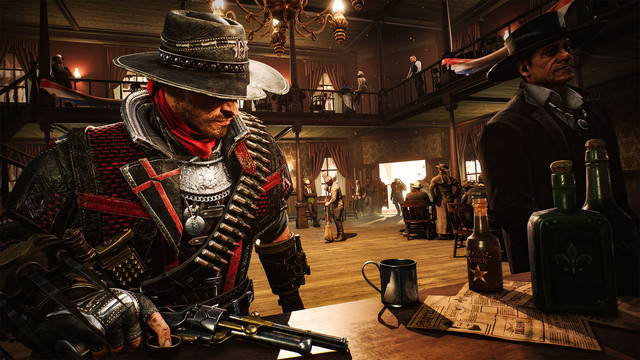 Evil West isn’t just a straight single-player experience as you can play the campaign with a friend in online co-op, this option will only become available after completing the tutorial chapter. When you bring in your Evil West partner, who looks like an exact clone of Jesse, for the first time, you will instantly notice another health bar on the top left corner and the difficulty in this co-op experience will be a bit harder with the two characters on screen. The small caveat to Evil West‘s co-op is that the host player will be the only one making progress on their save, but thankfully all gear stat points and money will be available to your co-op partner. If you die in battle your partner is able to revive you back after the healing ability cools down as you can’t abuse the healing ability in co-op, if both players die they will find themselves back at the nearest checkpoint. Overall Evil West‘s co-op isn’t anything special and does the bare minimum in co-op for an honestly average game.

Evil West was unexpected in some ways going in, it’s a good game with familiar yet enjoyable gameplay and beautiful cutscenes. It doesn’t do anything particularly great though, the story of Evil West is pretty average and serves the game with a few emotional moments/character interactions that were enjoyable. Sections that were annoying thankfully don’t stay their welcome too long but the slow asset loading on the map and lack of backtracking were honestly a little disappointing.