Eiyuden Chronicle: Rising is an Action-RPG game developed by Rabbit & Bear Studios and Natsume Atari and published by 505 Games taking place in the same universe as the long-awaited spiritual successor to Suikoden: Eiyuden Chronicle: Hundred Heroes.

Eiyuden Chronicle: Rising is, like many games that have shown up on crowdfunding platforms like Kickstarter, often given smaller, nifty games to prepare people for the release of the one they helped fund. Rabbit & Bear Studios understood that this was something that people liked and decided to come up with a different adventure but one that will propel the player into the world of Eiyuden Chronicle, however with totally different gameplay. 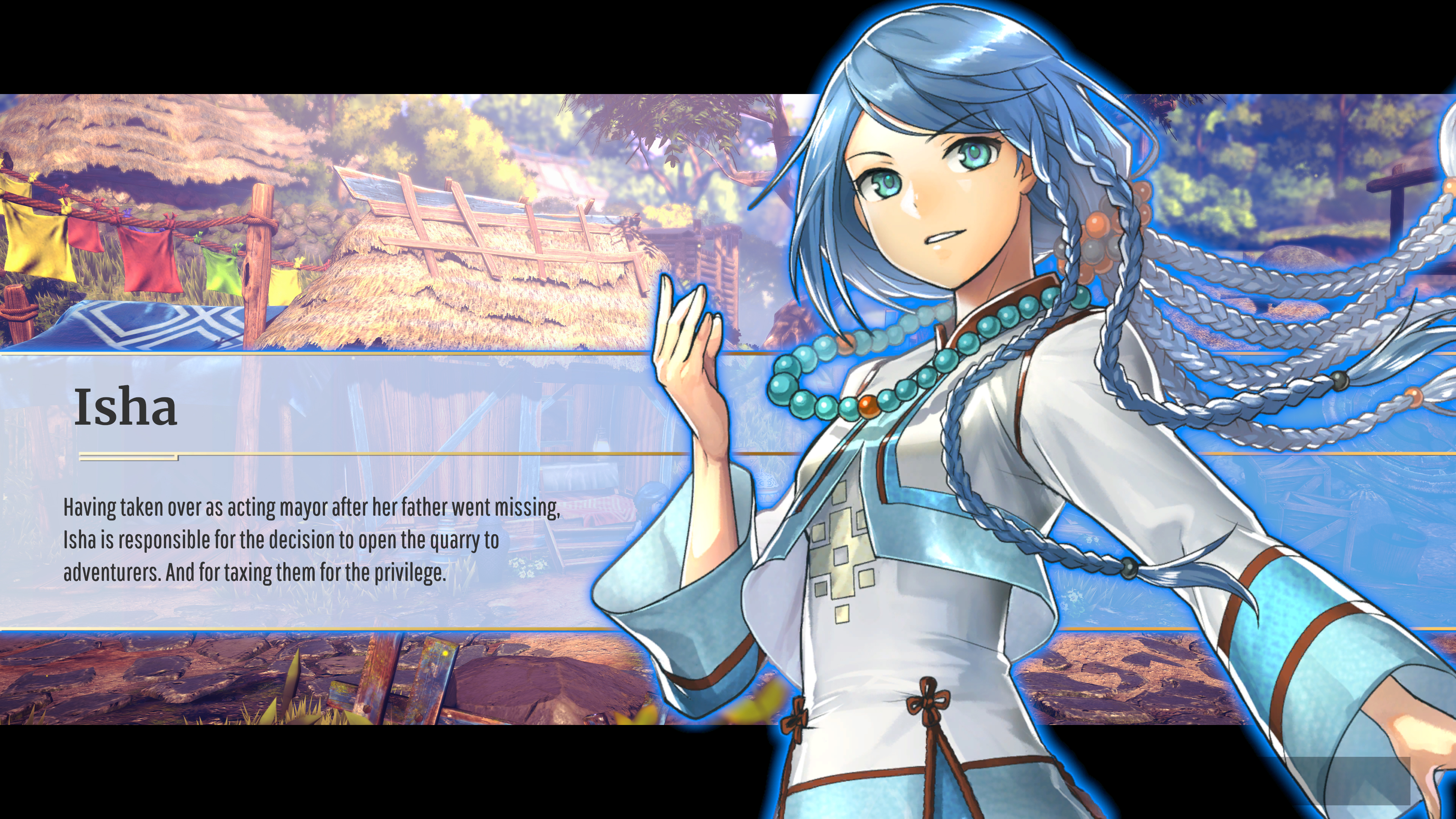 In Rising, you play the skilled young protagonist CJ, an aspiring treasure digger in search of a massive lens as part of her village’s coming-of-age rites. Her journey will take her to New Nevaeh, a small town attracting adventurers from all over the world to come and research the ruins discovered near the town. In order to win over adventurers and seekers, the city, which is experiencing difficult times, tries to enlist adventurers to do good deeds in exchange for stamps, according to which they could obtain a right to enter the ruins. Thus, the city recovers money from purchases and taxes that adventurers find in the ruins in addition to being able to repair buildings that have collapsed during earthquakes and natural disasters. Thus, CJ will respond to the call of wealth and discoveries and will have to work for New Nevaeh at the same time. 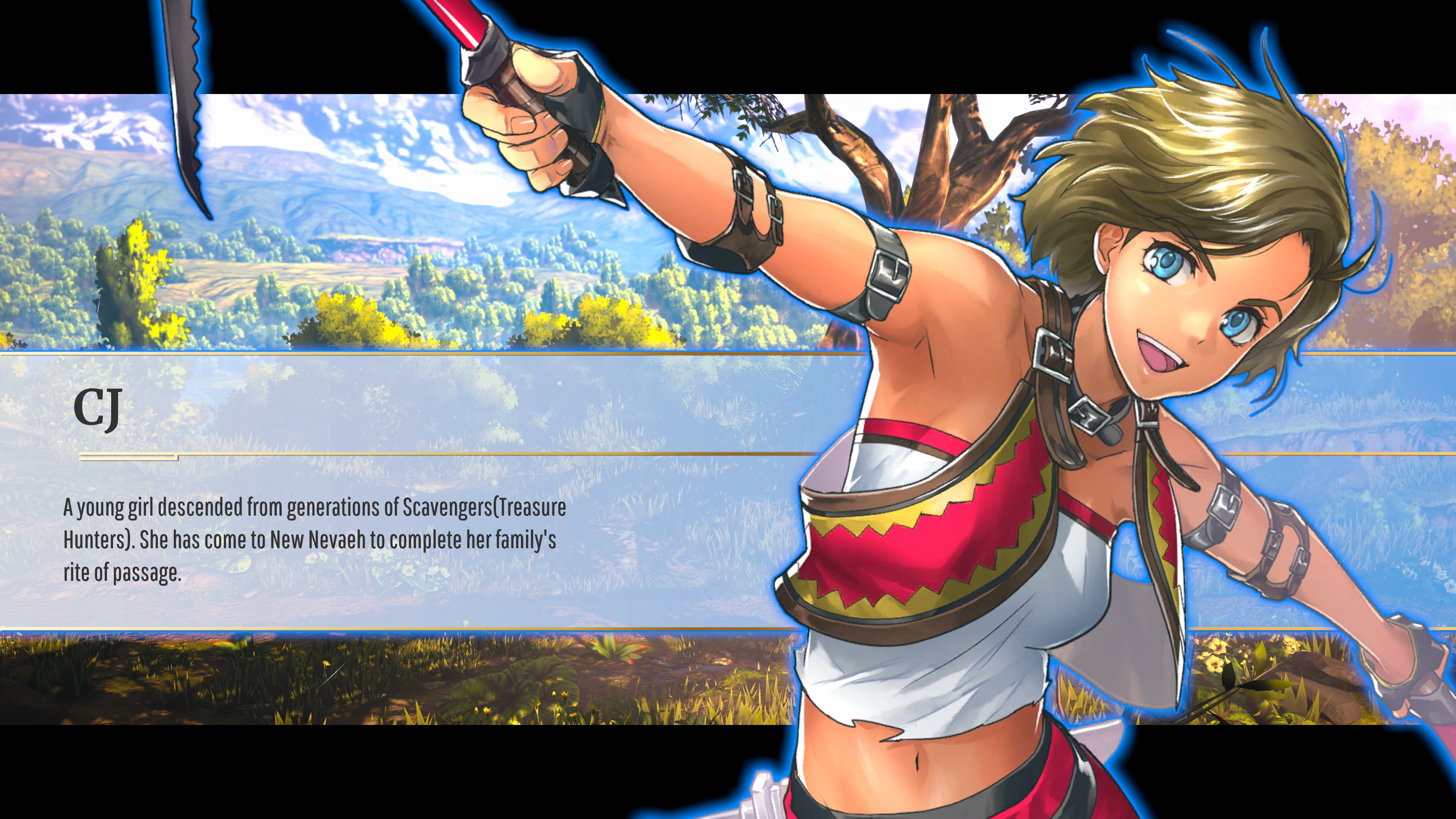 Before you can search the ruins, you will therefore have to help the citizens by saving cats, collecting wood, rock, mushrooms and more, in order to be able to allow people to rebuild different buildings such as the forge, the tavern, the inn and many others. Seeing the town grow with each action you take and seeing your stamp card fill up each time reveals a little simplistic side which is a lot of fun because each time you tend to look at the corner of the screen to see how many missing stamps are needed. In the meantime, all the resources you collect during your hunts will be put aside and perhaps used to improve your weapons, your armour and even to create potions of all kinds. Visually, the game is very pretty and very colourful. It has several layers of backdrops to give a kind of depth effect to the adventure, all ranging from a very well-drawn background to and foreground parallax effect. The effects of light and shadow are exceptional, not to mention the visual quality of everything that moves around us, including trees and rivers. It’s almost a shame to see that on the character animation side, it looks more like avatars created in Flash where the only thing that moves is the neck, shoulders and legs. On the audio side, however, the sound effects and even the soundtrack are a bit bland and lack punch. The progression in the combat zones is good and each enemy you see has its own attacks. For example, in the forest, you will have creatures that will try to bite you and, these same slightly different creatures in the caves, they will try to spit rocks in your face.

At first, I had the impression that the fighting style was going to be very simplistic, but a new fighter tagged along Garoo, a kind of humanoid kangaroo with a gigantic sword. Thus, with Garoo on my team, I was able to learn how to use combos since he could therefore hit when I pressed the triangle button while CJ hit via the square button. When the hits were well-timed, we could do a very devastating double strike with both characters simultaneously, being able to break shields, split stones or simply quickly kill one of our attackers. Only downside: very often pressing to hit with another character only summons him on the screen to be controlled rather than having them hit, which will often have the effect of getting unnecessary damage . 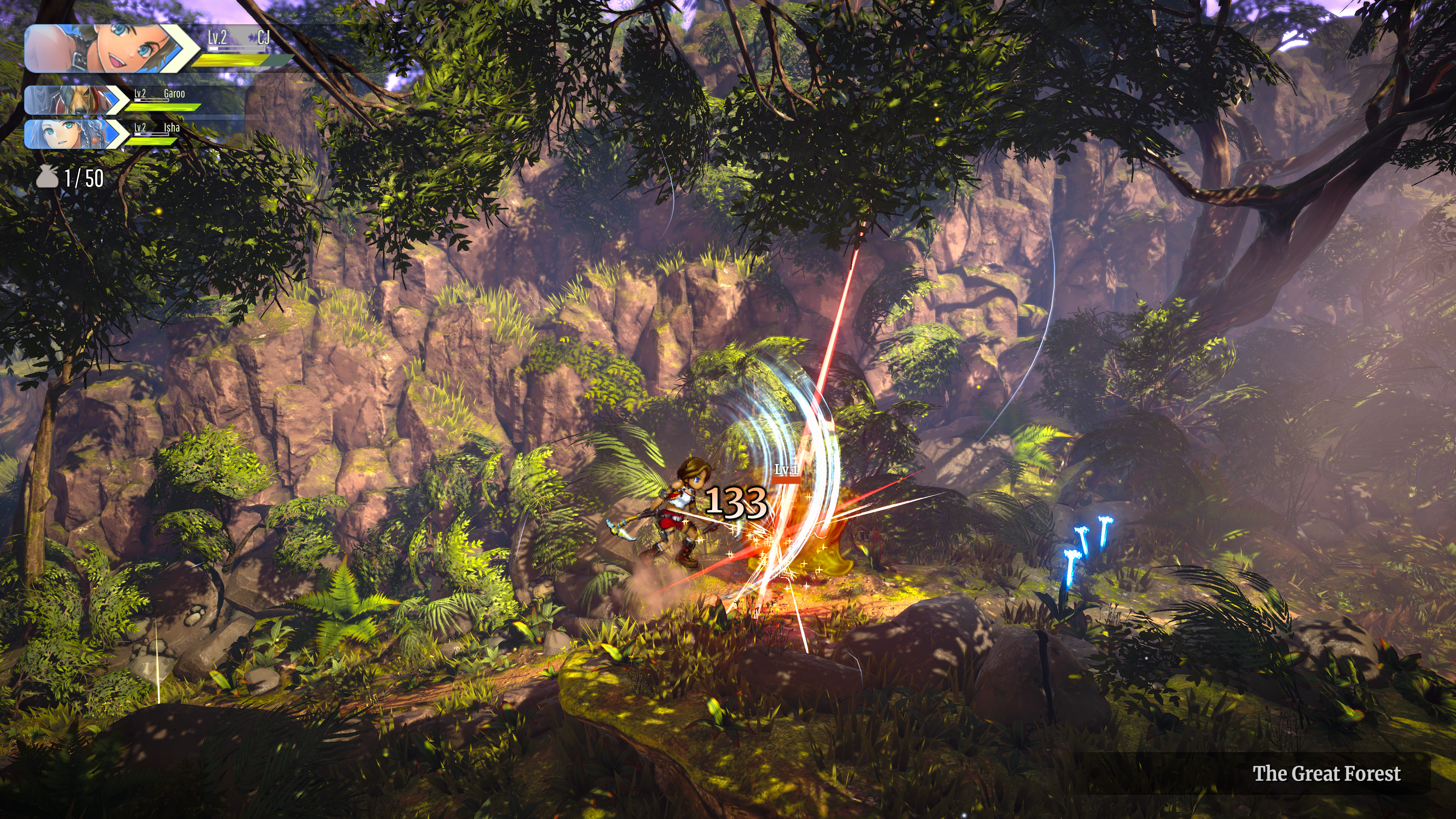 The more you progress in the adventure, the more you will unlock techniques and skills, such as the rapid dash while mid-air, block attacks or even the possibility of chopping wood or mining stone. All of this unlocks through city expansion and quests that you must complete for the townsfolks. Eventually, you will also be able to use magic or runes to destroy certain elemental rocks, giving you access to unexplored areas and, moreover, facing enemies who will be weak or strong against the element you have equipped.

Unfortunately, a small negative point of the game is the fact that the dialogues are very childish. At times, we feel like CJ and the townspeople are kindergartners fighting over the same toy. That said, the dialogues are clear, concise, and complete and the story is very well put together. 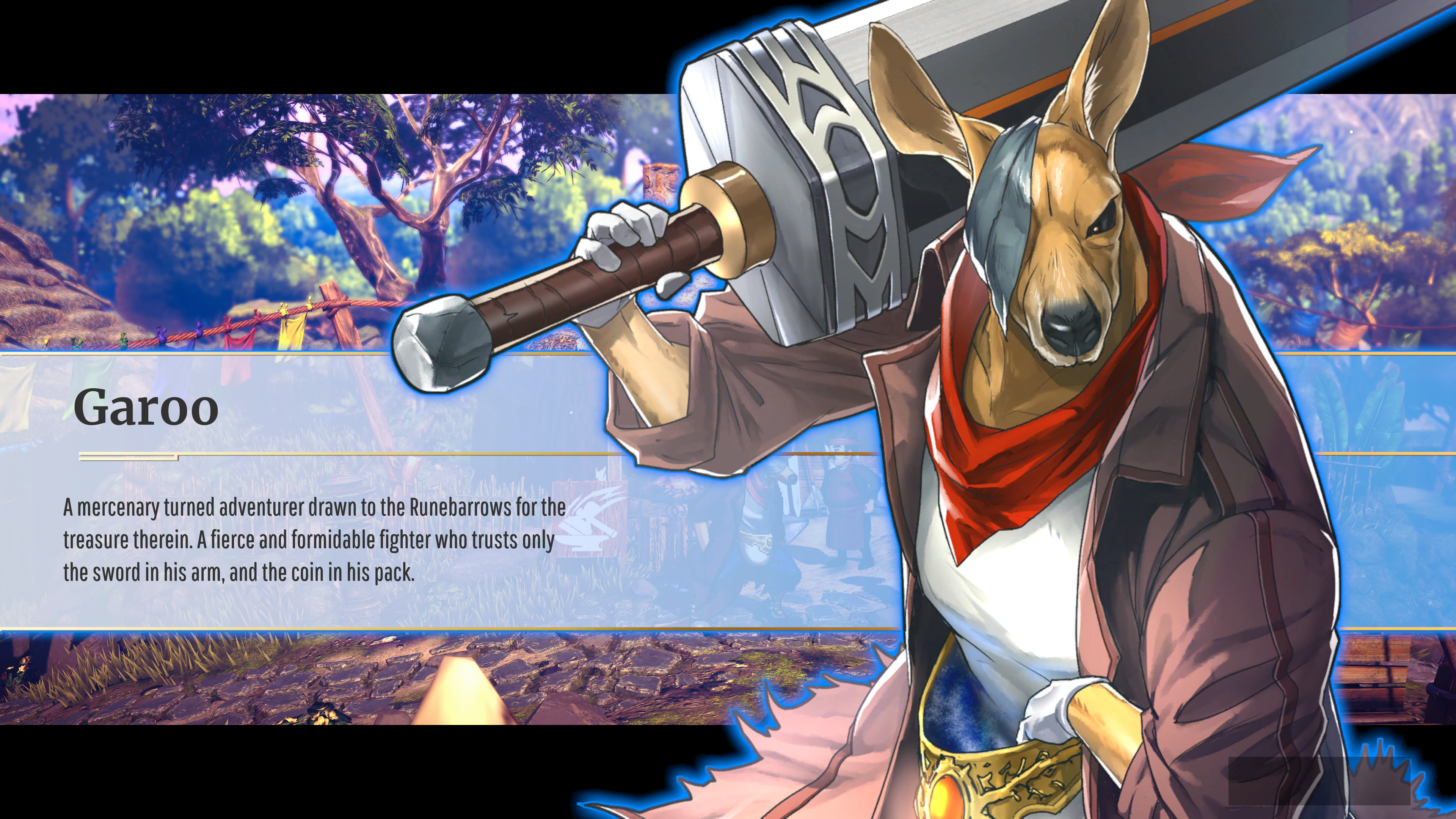 You will realize this aspect fairly quickly since some dialogues are very quick and seem, at times, to lack content. On the other hand, we cannot blame the game for having too many useless dialogues.

From the start, you may realize that the game has a very large amount of quests and additional quests. To such an extent that at some point, we tell ourselves that too much is not enough. The main quests generally consist of talking with NPCs to help them rebuild their shops by collecting the necessary resources or talking with other NPCs, while the secondary quests allow you to unlock certain bonuses and improve shops. 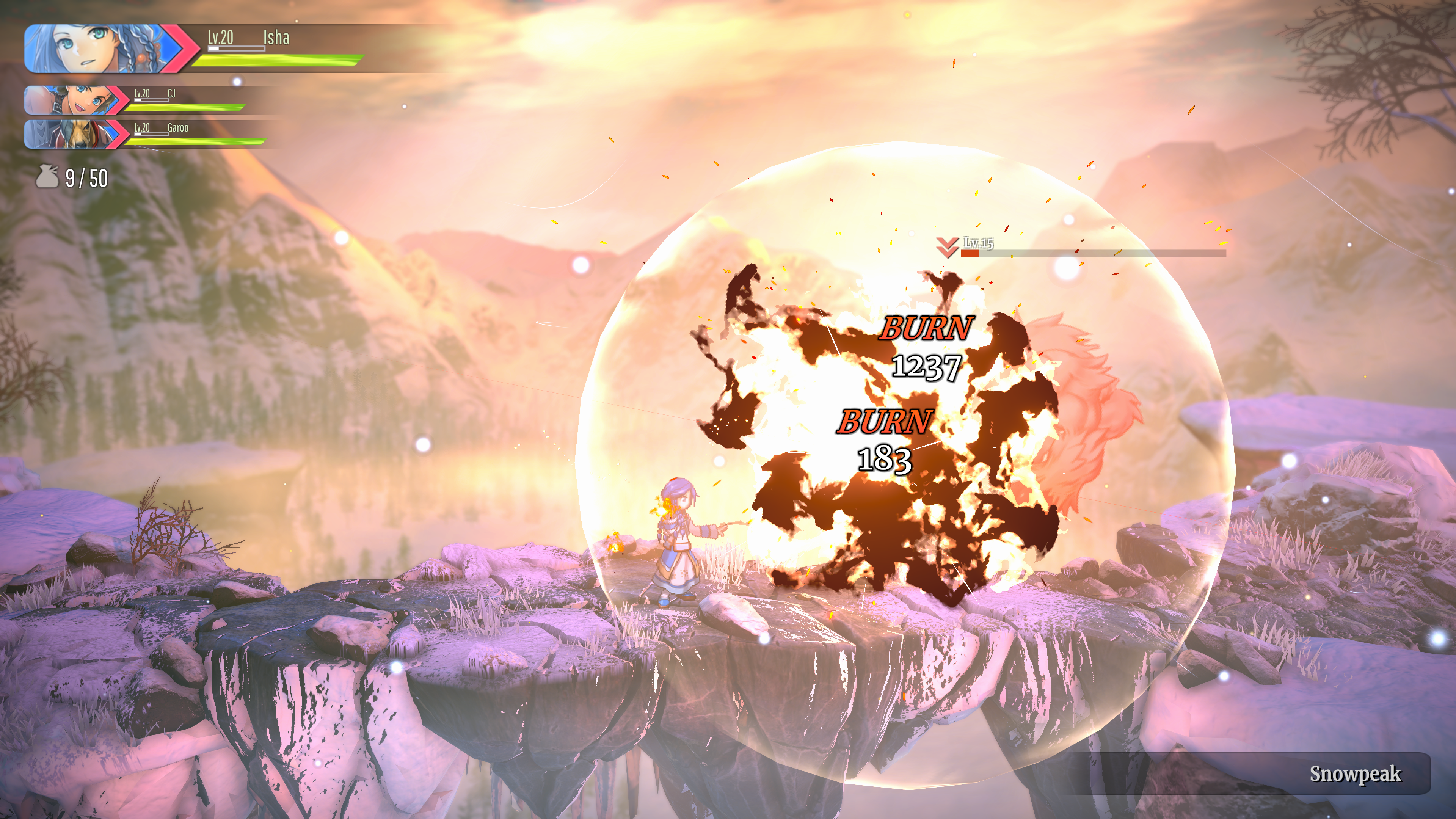 Initially, you will have to expect to go in the big forest, in the cave and in the different areas of the city and this, for almost eight or nine hours without stopping before even being able to finally travel in unexplored areas.

Eiyuden Chronicle: Rising is not a very difficult game, the dialogue is deep and the quests are enormously redundant. That said, it’s very enjoyable as an Action-RPG type of game in a 2D platformer and once the long looping exploration phase to collect resources and rebuild the city is over, the adventure takes shape more and more and really becomes more fun.

Nevertheless, for $19.99, it brings a little comforting and pleasant side story that makes you want to continue playing it while relaxing in order to progress and finish it, especially knowing that everything you do in this game will have an impact on what you will have unlocked and collected for Eiyuden Chronicle: Hundred Heroes upon release.

Recommended
Great graphics
Nice story
Price ridiculously low
Quite long to play
All resources and findings will follow in Eiyuden Chronicle: Hundred Heroes
Too many redundant quests
Childish dialogs
Some fighting issues
Original soundtrack could have been way better
Related