The gaming world is ripe with dungeon crawlers, but not many present a story and a long series of puzzles the way Dungeons of Dreadrock does. It’s a charming game, with some dark tones and a great sense of humour all wrapped into one package. It’s had quite the impressive run on both Apple and Google mobile platforms, and as far as I can tell the Nintendo Switch version is just as special.

Dungeons of Dreadrock begins with a brother-sister duo camped out and ready to defeat the Dead King. Each year the local villagers send one boy to venture into the mountain where he presides; the problem is that none of these young adventurers ever return. That’s where you come in, as a brave sister not only ready to defeat whoever this “King” is, but even more importantly, a sister who’s on a mission to save your brother. 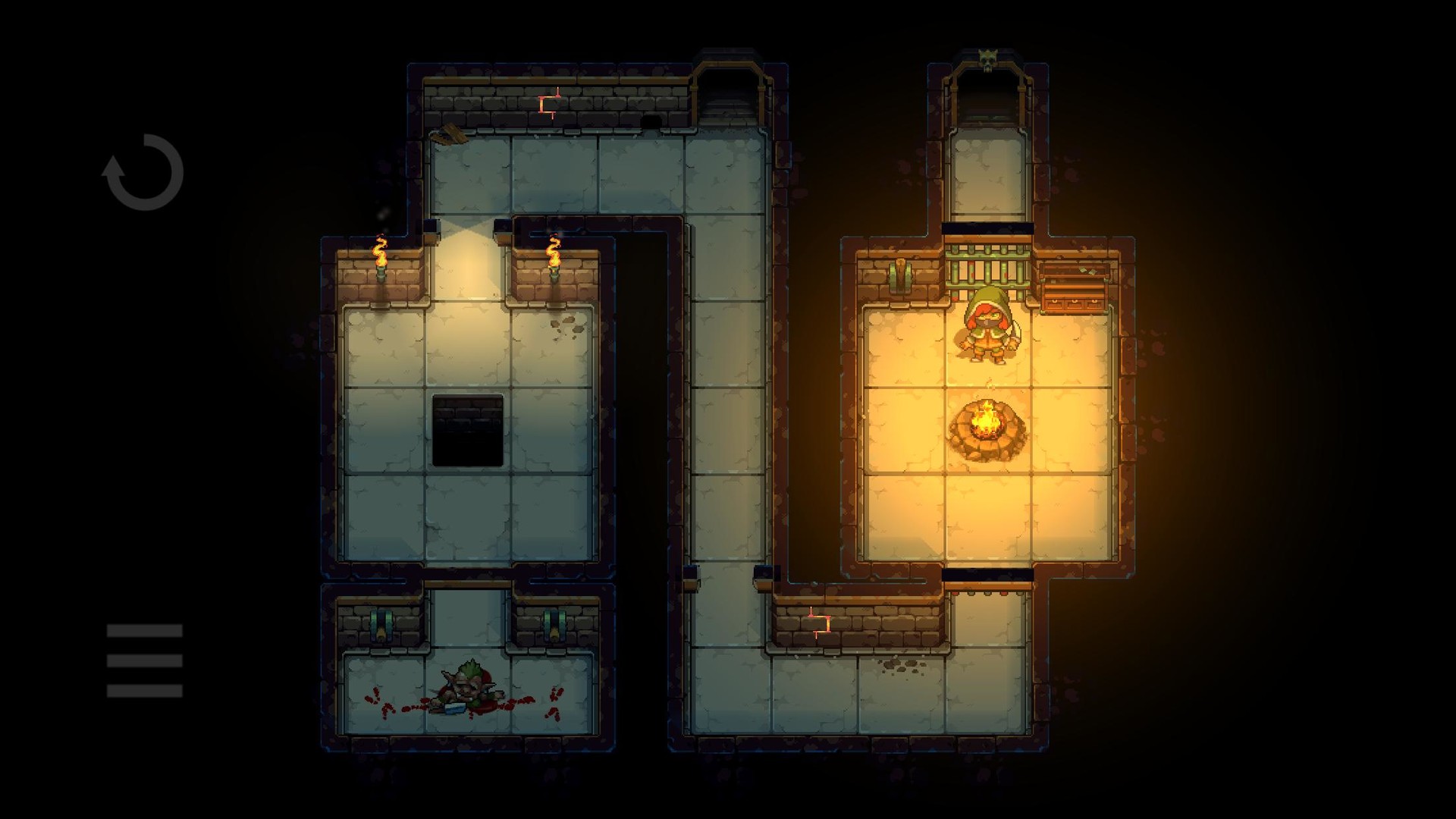 Descending into the dungeon and mountain is not only the key to surviving and saving your sibling but uncovering an increasingly interesting story filled with surprises.

Dungeons of Dreadrock isn’t your traditional dungeon crawler; there are no rogue-like elements and no traditional RPG-like upgrade system. It does have a wide variety of puzzles that will keep you engaged even in short bursts of gameplay. The puzzle mechanics are the heart of the game, a full 100 stages ready for you to solve. 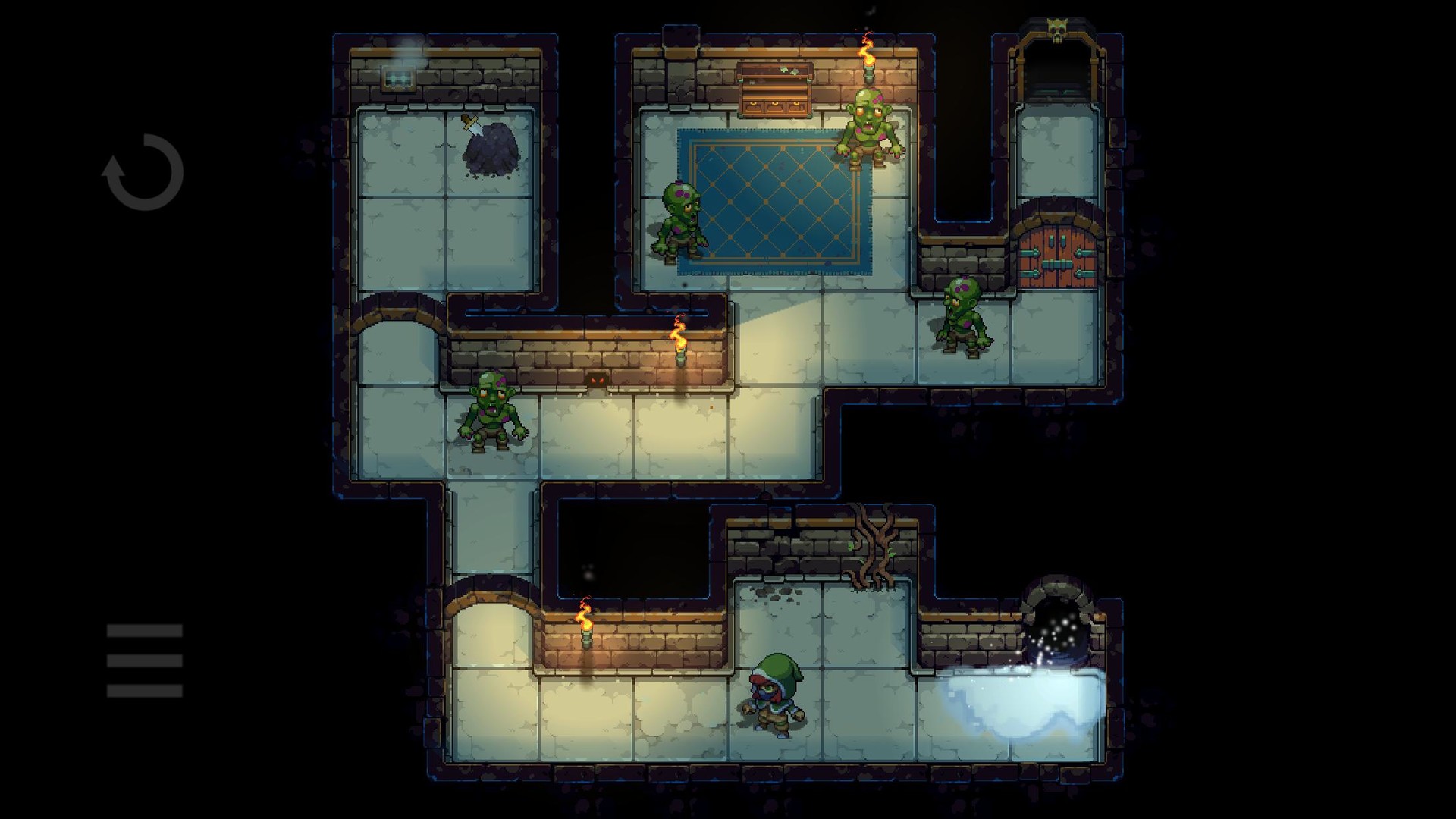 It appears fairly simple; a top-down grid-based layout can lend well to mobile devices and feels great on the Switch. When the Dungeons of Dreadrock adventure kicks off, you’re presented with puzzles that ease you into new ways of traversing and battling enemies like goblins, trolls, and wizards. There’s no obvious tutorial, but the game does a great job of teaching you with a “hands-on” approach. 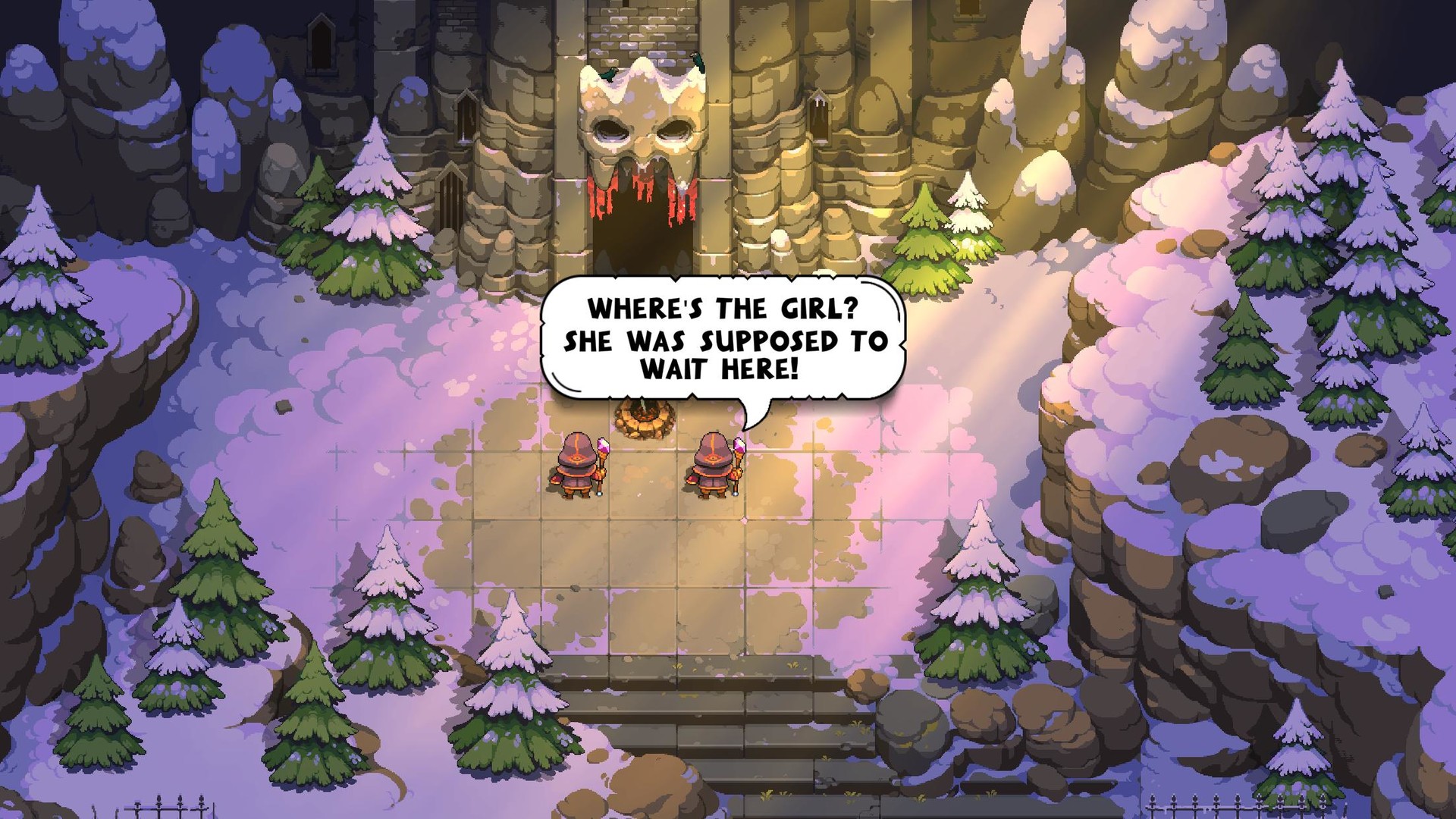 I found myself literally puzzled by some of the stages throughout the game. But with some determination, instant respawns, and a great hit/clue mechanic, it always felt like it was possible to progress. You’ll be given clues not only by finding items in the world but after spending five minutes on one stage, a few more are available on the side of the screen. This is both helpful and welcoming for gamers of all levels.

Dungeons of Dreadrock presents each and every one of its 100 stages in a grid pattern but also finds a way to make each one unique. Sometimes you’ll find yourself, slaying enemies, while on the next you’ll need to discover hidden doors in order to make it to the next campfire for safety. But don’t get too comfortable, one set of stairs lower and you’ll be dodging traps and trying to fool enemies with each step you take. I was never bored, I never felt like that puzzles were lazy or repetitive. 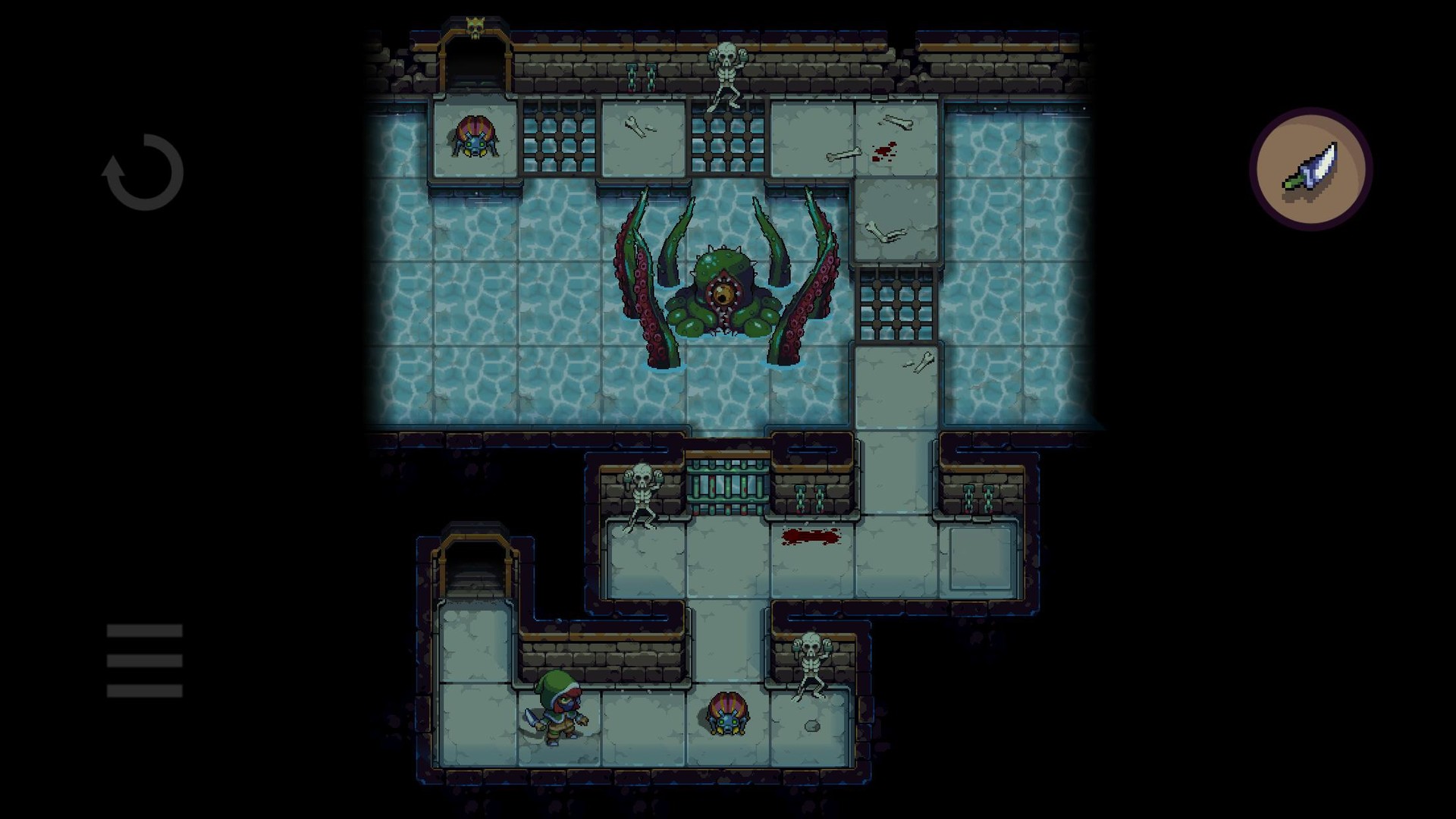 Sure, the game is presented in a top-down view, but it’s clear that the developers took the time to make a unique and enjoyable game from… top to bottom. Dungeons of Dreadrock could have easily gotten away with a dark and grungy crawl, but instead, there are dozens of interesting characters and stages. While there are some repeat ideas, none of them are put together in a fashion that you’d seen before.

One of my favourite parts of the game came from the narration. Every so often there will be a clue or story beat read by a soft and kind female voice. No matter what she was saying, it was engaging, well-written, and well-acted. 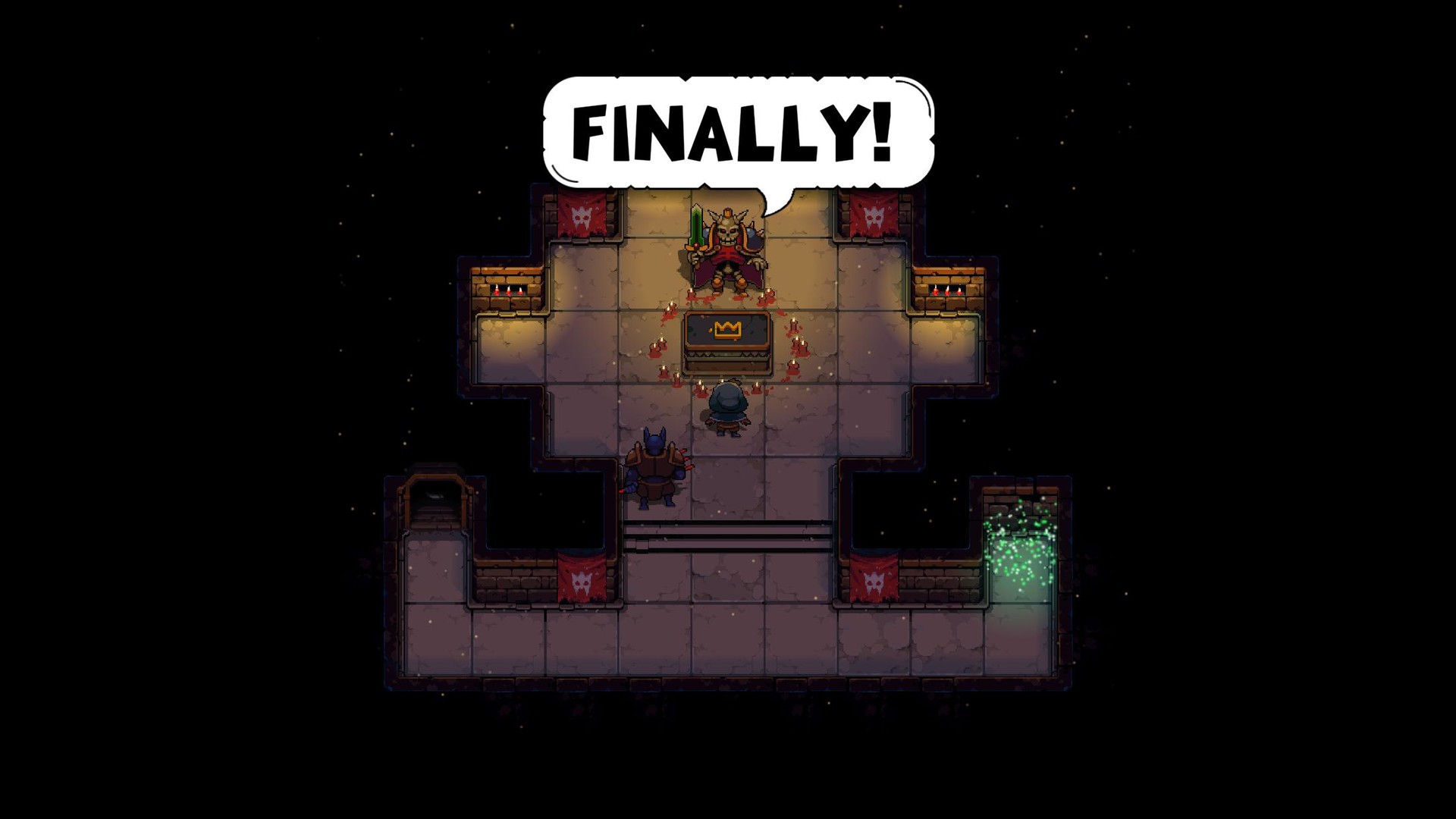 One of the best parts of Dungeons of Dreadrock is that all of the aspects I’ve described can be experienced in a bite-sized package if you choose. With the Switch’s quick resume feature, you can play a stage, or two, or six, and pick it back up again a few hours later without worrying about progress.

The game is a great brain teaser throughout and presents a story and field of characters you want to adventure with. Dungeons of Dreadrock surprised me but in all the right ways.