JRPGs are is one of my favourite games to play, there is something about them be it storytelling, game design, character designs, mechanics and so much more that feels timeless and speaks to me much more than western RPGs. Dragon Star Varnir is a stark reminder that not all JRPGs are at the same level. Those previously mentioned satisfying aspects of Japanese games I enjoy are here in Dragon Star Varnir, it does a great job showcasing those aspects in certain areas while throwing in the towel in others.

Dragon Star Varnir is an original title JRPG with visual novel storytelling elements, it was initially released in 2019 on PC and PS4. The game recently made its way to the Nintendo Switch last week as listed in the first edition of our weekly game release list. The game offers DLC in the form of weapons and armour, more than half of which is free to download and they honestly do help a little in the first couple of hours.

I don’t consider Dragon Star Varnir is a bad game but it does feel more like a generic fanservice JRPG that does everything it can while having an interesting premise. That story it sets up feels like a world with a dark aesthetic and honestly had so much potential. It feels like in the early part of the game that gets lost while the storytellers try to remember they need to focus on the harem protagonist story with a good amount of fanservice to go around.

Dragons and Witches are one and the same

Dragon Star Varnir kicks off with a voiced narration bit giving the players context to the world, which I immediately recognize the narrator was Jon Baily aka the voice of Honest Trailers. The game is set in Varnera, a land ruled by the ‘righteous’ holy empire who hunt down dragons and witches. While usually their different entities, they are one and the same as witches are cursed creatures that have a growing dragon inside their body. If a witch doesn’t eat dragon meat after a certain amount of time they go mad and turn into a violent dragon. 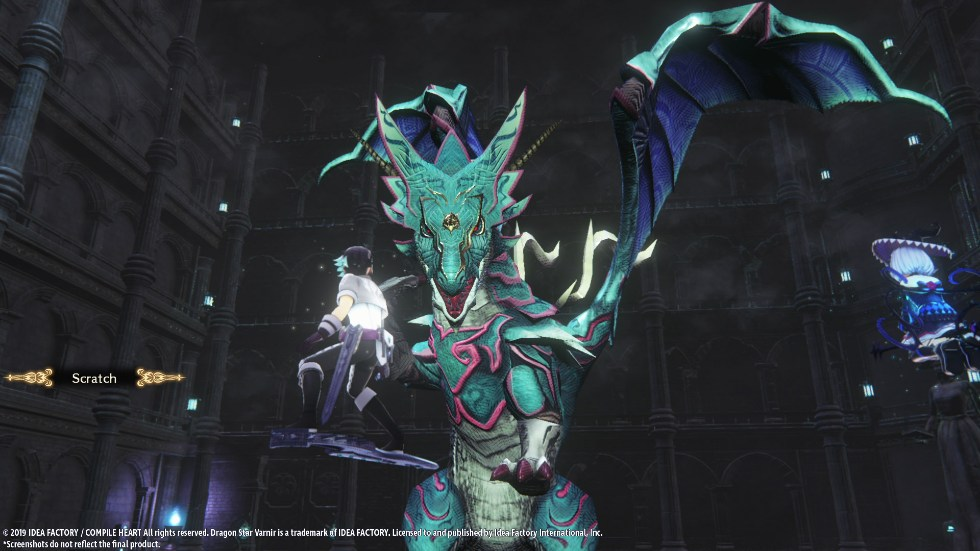 After the lore dump, we are introduced to the game’s protagonist, Zephy, a Knight of Requiem which is the empire’s proxy to hunt witches and execute them publicly. Zephy is on a witch hunt with his team but gets separated from them, after a while Zephy finds himself being chased by a dragon. After a while he realizes running is useless and fights it, he struggles but he eventually dies from the fight with the creature.

A little after, two witches, Karikaro and Minessa find his body with the latter of the two trying to heal him to use him as a bargaining chip for her fellow captured witch, Laponette. Unlucky for him, healing magic has no effect on the young man. This leads to the blue-haired witch taking a risk and using dragon blood to revive him which is useful on witches but is unsure how effective it is on humans.

It shockingly works but a little too well as it turns Zephy into the very thing he was hunting, a witch; the world’s first male witch. With no choice of going back to the knight as they’d kill him immediately, Zephy takes the side of the witches. Your characters are officially introduced to the game’s antagonist groups like the Knights of Requiem, the Holy Empire and the Ravens which is basically a mercenary group that aligns with the empire’s side. The group’s whole thing is they’re more interested in killing dragons to develop technology to better equip themselves in battle. 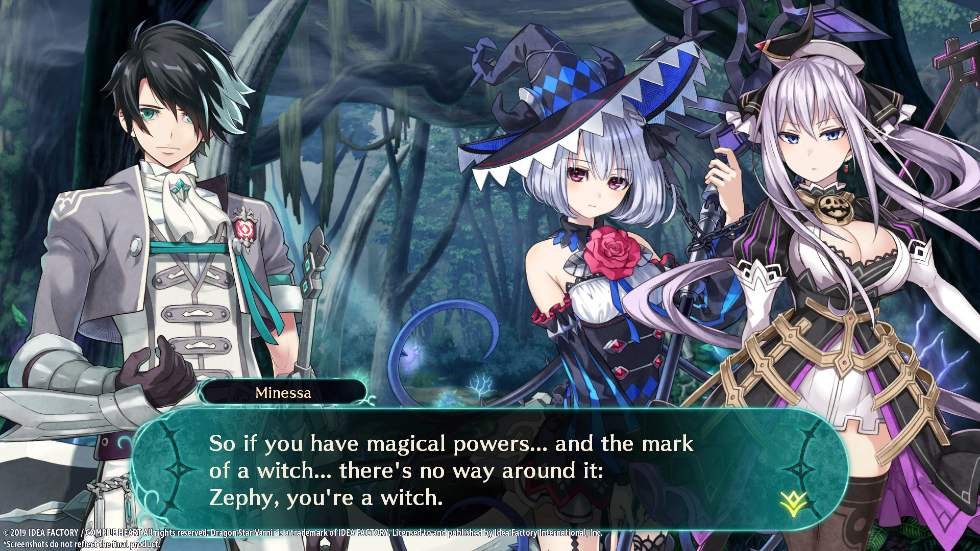 One of my favourite aspects of the game is definitely the characters, it’s through them you learn more of the world and they make it entertaining with the game’s pretty good voice cast. I actually did recognize Edward Bosco, the voice of Zephy as he’s the voice of my favourite D&D podcast. After the first dungeon – where you’re literally introduced to all the game’s characters – in the game, you’re introduced to the Witch’s Den which is your base of operations. It’s here you can redeem collectable side quests, mix elixirs, feed the sister witches so they don’t turn, improve your relationship with your comrades (yes romantically if you max them) and buy and sell items, weapons, armour, and more.

If you’re familiar with turn-based battle systems then Dragon Star Varnir might make you feel at home. I will say as far as JRPG battle systems go, this Compile Heart game has a unique approach I wasn’t expecting. It goes all-in on the witch aspect of the game and you’re actually fighting enemies in the air by flying on your ‘broom’ which for the female characters are the staffs they carry with them. Your male witch flies a bit differently and flies on his giant sword like a hoverboard in Back to the Future. With your characters being able to fly, your character is able to go up and down on three different levels – low, mid and high. The player is able to choose to attack an enemy at a specific level which comes in handy for larger boss enemies. 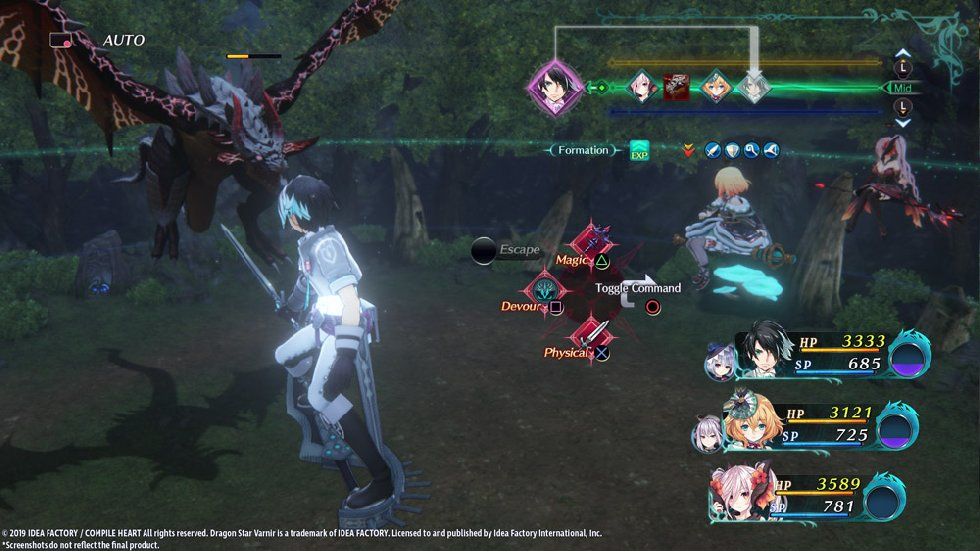 Be warned the battle system has a lot of text on-screen and two different command menus you can switch between when it’s on your character’s turn. The first menu gives you the choice of choosing between using physical attacks, magic attacks or devouring your enemies which turns them into a dragon core which allows you to upgrade your character skills. The second meanwhile has options like using items or switching spots with a character’s corresponding support character.

On the right of your character’s health and magic bar is the dragon mater. When it fills it allows them to transform into their hybrid dragon form, think of it as a witch’s Super Saiyan mode. The form while really fanservice-y – that doesn’t cover that much for the female characters – does help out in battle with increase strength and a signature attack for massive damage. The transformation isn’t really rare as all playable characters can do it and it happens more often in gameplay than you’d think which really helps a lot of the time. 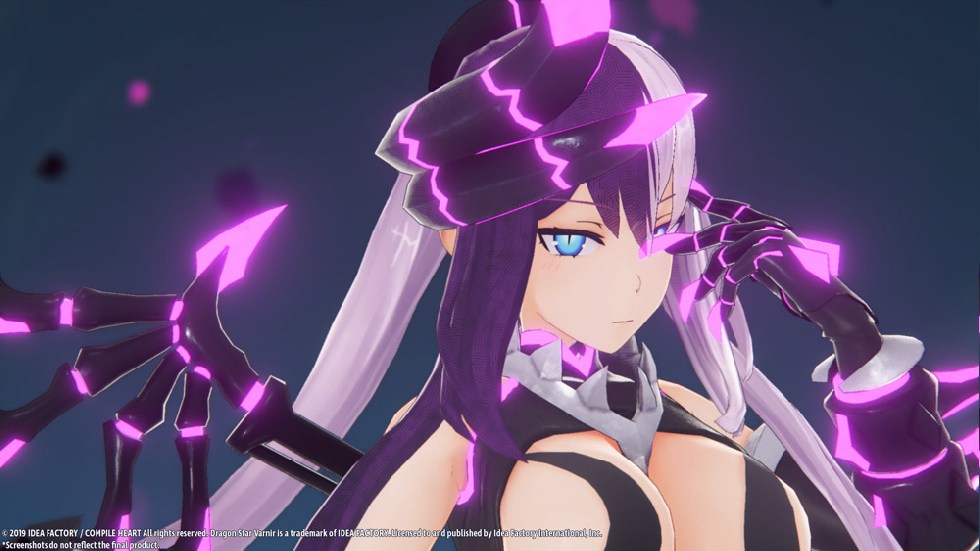 When you’re not fighting enemies, you’re exploring the dungeon which honestly feels huge while empty a lot of time. You can fight enemies you run into, collect items from chest, from destructible objects or by picking them up from the ground but not much else is going in these dungeons. You can get items by just walking up to it but that’s not always the case when they’re on higher ledges. To get to inaccessible items you can fly at any point on your broom for a limited time to get to those higher to reach places.

While exploring you can easily switch characters as you explore, which you need to do to get past obstacles. Each character has a special ability for example Zephy can break seals while Laponette can make magic bridges to get past gaps – which you can not in fact fly over with their brooms. Other characters have miscellaneous abilities like Minessa being able to transport your team out of the dungeon at any point while Karikaro is able to find hidden treasure.

Visually Dragon Star Varnir is a beautiful game at 1080p resolution when it comes to the visual novel part of the game. I find the character designs and background absolutely captivating. When the game switches to 3D are when that visual quality dips down by a lot, I’ve already mentioned dungeons feel empty with character models looking awkward to me. 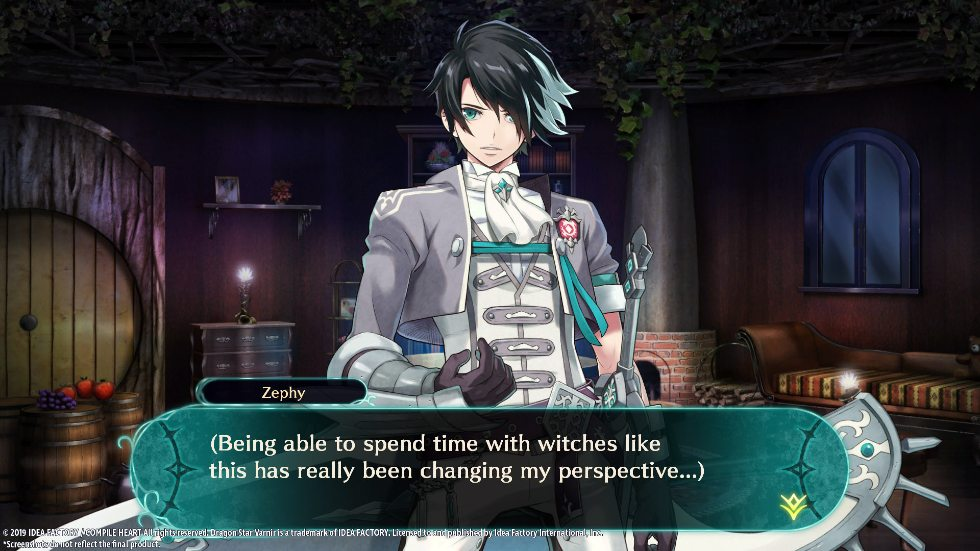 It’s the same visually for me as well as it kind of looks like an early Sword Art Online on the PSVita. Those games had an excuse because of the hardware but a game released in 2019 shouldn’t but yet here we are, I just feel not a lot of effort was put into the 3D dungeons across the board.

When it comes to gameplay, when you get into combat playable characters and enemy animations look better than the dungeon crawler part of the game but it’s like a huge improvement. As for the music it comes off as good enough. When listening it’s not really in your face of what’s it about but it’s not really a banger of a soundtrack. Although I will say Dragon Star Varnir does repeat a bit but you know there isn’t much to be critical about.

Dragon Star Varnir knows what it is but it is a hard game to recommend to casual players. The story and characters are honestly what kept me intrigued my whole way through even when it falls a little in quality. It’s visually beautiful in the visual novel section but falls a little flat when it transitions into a 3D dungeon crawler game but gameplay brings it up a bit, there is a good game here if look past its flaws but if you don’t it’s still an OK game at best.

I haven’t really played a lot of Compile Hearts games as I focus more on the marque JRPG series so haven’t had the chance to try out a modern budget JRPG that is in the AAA space technically but a step below then what I’m used to. I enjoyed my time with Dragon Star Varnir but not that much compared to other JRPGs. If you don’t mind Japanese tropes, fanservice, visual novels and empty dungeons then this game is for you.

Although if you want as little censorship as possible don’t pick it up on PlayStation as it’s slightly censored. Go for the PC or the Nintendo Switch version as both versions aren’t censored from what I hear.