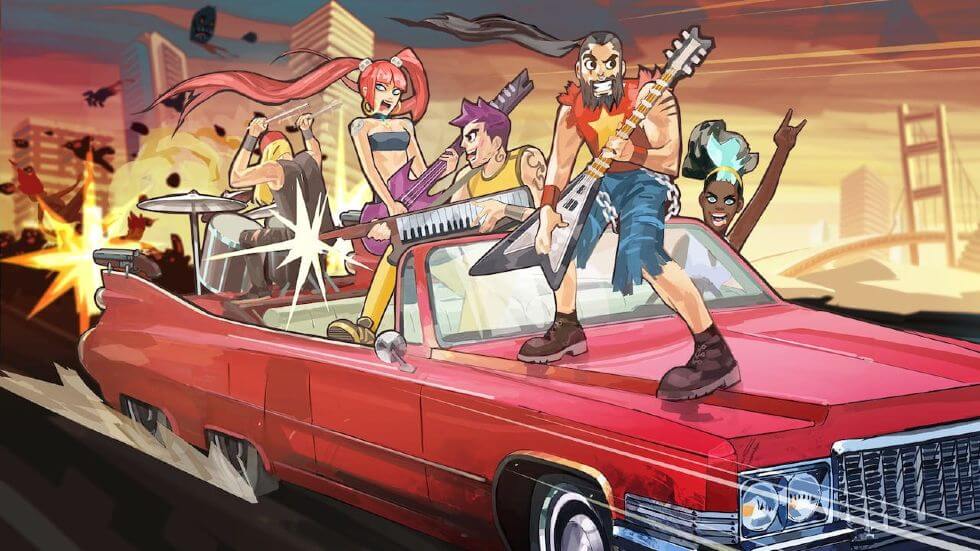 Double Kick Heroes is a rhythm game/shoot ‘em up, where metal music is your best defence against the forces of darkness that have ravaged the world. You play as a metal band on a road trip in their Gundillac (a car with guns fixed to its back, obviously), trying to outrun and outgun the zombies, monsters and other hell-spawn on your tail. This mash-up of game genres is one that I hadn’t seen before, and I was curious to see how the elements of each would mix together. And while there are a lot of good ideas in Double Kick Heroes, they don’t feel fully formed, resulting in a flawed but sometimes fun package.

There are a few ways that you can experience this game: arcade mode, which simply lets you play the songs on their own; Hellgate, which features the many guest tracks (one of them is a 14-minute track called L’autruche by Psykup, and let me tell you, it is a wild ride); and Fury Road, which lets you play random levels with random buffs.

The story mode is the main attraction though. It tells the tale of the Double Kick Heroes, a band obsessed with all things metal, and their efforts to survive (and hopefully vanquish) the evil that is constantly on their tail. The story is ridiculous, but when you’re killing demons with the power of metal, that’s exactly how it should be. Throughout the adventure, you’ll meet characters inspired by real icons in safehouses, which was a fun surprise, though admittedly, I did not recognize them all. The writing was entertaining enough to keep me interested in seeing how it played out, and the ending was abrupt, yet oddly satisfying.

Once you select a level from the world map (or whatever mode you are playing), the Double Kick Heroes are ready to rock out on the back of the Gundillac and kill some zombies. If the horde catches up to you though, it’s game over. The double kick drums serve as your main method of attack, firing the upper or lower gun each time you hit the corresponding button on time. In higher difficulties, a second track representing the snare drum gets added in, which when hit enough will launch a grenade at the horde of demons chasing you. And on the highest difficulty, a third track is added, representing the cymbals and a sniper rifle that acts similarly to the grenade launcher. 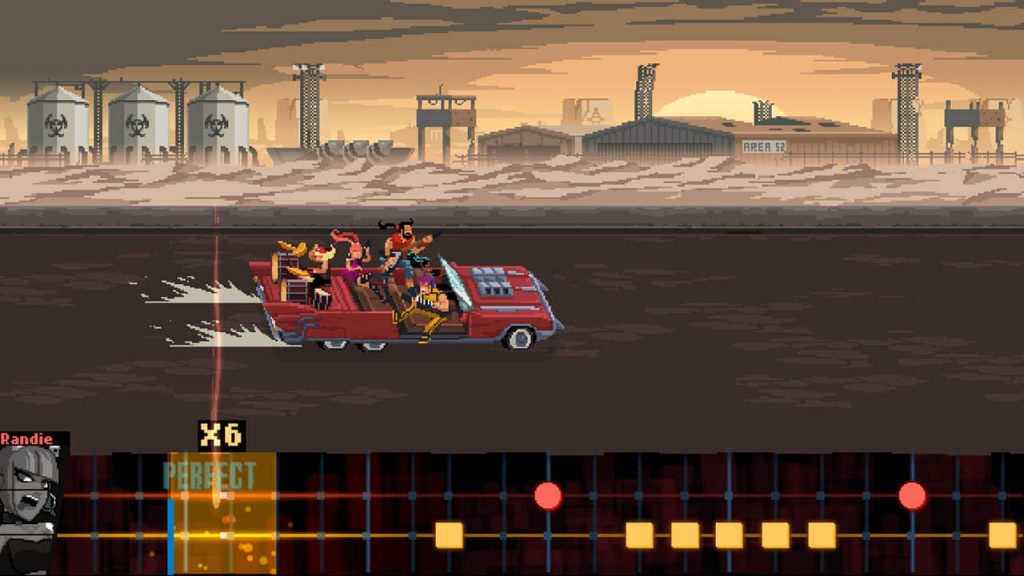 If you don’t miss any beats, your multiplier will go up, increasing your score and making your guns more powerful. I like this addition, as it rewards good timing and can get you out of trouble quickly. The other weapons function similarly; you don’t choose when to fire a grenade or use your sniper, it just happens if you are performing well enough. But maintaining the multiplier and filling the weapon meters can often be nearly impossible, thanks to some insanely fast drumming in the tracks.

This game gets extremely demanding, regardless of what difficulty you are playing on. The kick drum track stays the same on every difficulty, and it can get absurdly fast. I couldn’t play with a normal grip on my controller, as my thumbs were not nearly quick enough to keep up. Even when I switched to my index finger (or resorted to using both hands on both the kick drum buttons), it was still way too fast for me to hit all of the notes. It ended up feeling like I was just mashing buttons with no sense of rhythm, and I can’t see how anyone would be able to perform these songs perfectly. But even if this is just a problem with me and my apparent lack of dexterity, moments where the beat gets that fast will quickly take your focus away from any of the other elements of the game. 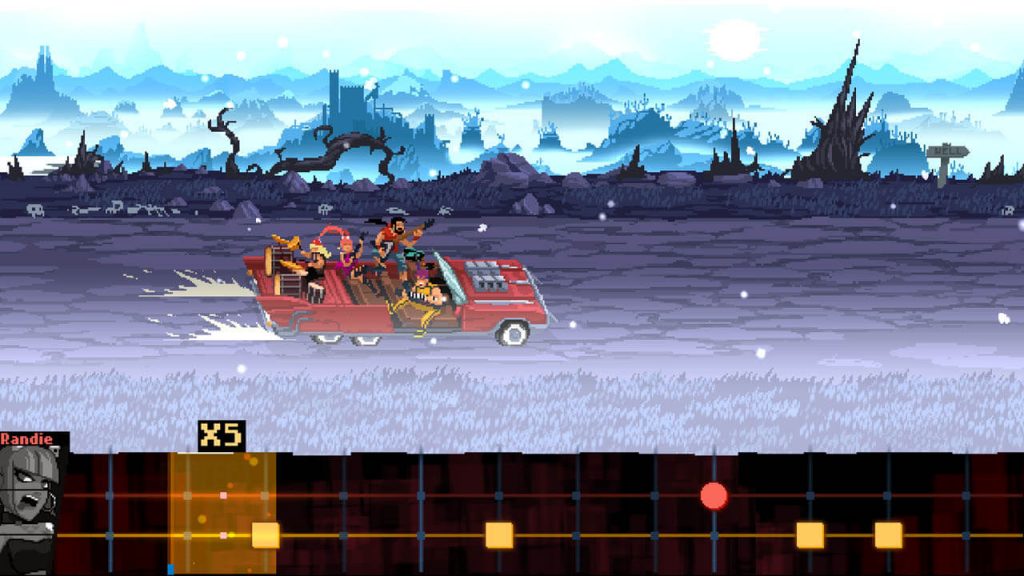 Double Kick Heroes feels like it was built as a normal rhythm game first, but then someone thought to add the twist of making it a shoot ‘em up as well. The set-up is standard stuff for a rhythm game, the only difference is the choice between kick drums/guns. It works, but the idea doesn’t go anywhere particularly interesting. Every level plays out the same way with regards to the shooting, only the songs are different. And given that your options are limited to the upper or lower gun, the game rarely feels like more than a rhythm game with some crazy demonic stuff happening in the background.

Pedal to the Metal

Composer Elmobo has done a great job with the music throughout the story though. As you go along the road to hell, the tracks get faster, heavier, and more intense, which helps to ramp up the tension. I do have my issues with the speed and difficulty as I mentioned before, but putting that aside, I think the selection is impressive. There’s a wide variety of metal sub-genres represented, and although I’m not an avid consumer of metal, I found myself enjoying many of the songs.

And that’s a really good thing because it was hard to focus on, let alone enjoy any other aspects of the presentation in Double Kick Heroes. In times where the drums cut out, I was able to look at the horde of enemies and see all of their unique designs, but these moments were few and far between. Most of the time, I had to keep my attention on the relentless barrage of notes coming at me to scrape by. I don’t want to diminish the work that was done on the game; it’s clear that a lot of passion was put into this project. I just wish I was able to appreciate it more while playing. 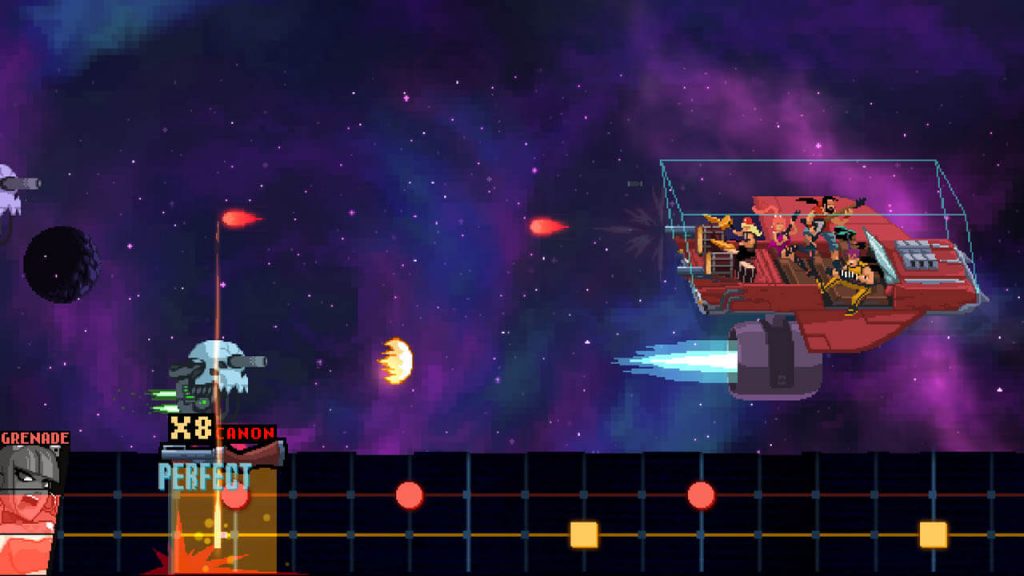 Double Kick Heroes left me with mixed feelings. I think that there are a lot of good ideas on display here; the story is wild and ridiculous, the aesthetic of the game is consistent, and the core concept of a rhythm/shoot ‘em up is unique. But the shoot ‘em up elements don’t go anywhere, and in the end, I spent just as much time being frustrated and exhausted at the difficulty as I did having fun with the songs and the gameplay.

I’m hesitant to recommend it, but if you love metal music and rhythm games, Double Kick Heroes might be for you. Just don’t expect too much from the shoot ‘em up aspect of the game, and be prepared to mash your controller as if your life depended on it.