If there is one universe I could say was my favourite addition to LEGO Dimensions, it would definitely have to be the Doctor Who universe, hands down! And with the release of the Doctor Who Level Pack, I couldn’t be more thrilled!

The Doctor Who Level Pack includes the Twelfth Doctor minifigure, the TARDIS, and a K-9 companion. The main story for the pack is entitled “The Dalek Extermination of Earth”, in which the world as we know it has been destroyed and taken over by the Daleks. It’s up to you and the Doctor (and maybe LEGO Batman…) to go back in time to fix the past, in order to correct the future, and finally put an end to the evil Davros and his Daleks’ takeover! It was fun having to go back in time to London’s past and present, and making small changes that affect the future in a helpful way. This is the third LEGO Dimensions Level Pack I have played so far (including the Portal 2 and Back to the Future Level Packs) and I have to say, this is not only my favourite one yet, but also the longest, most thought out pack out of the three. And unlike other packs, this was the first one where I rarely found secret areas for characters I did not have. My saving grace for that had to be the addition of K-9. Not only could you ride him and use his blaster abilities, he was able to break anything in silver, which most in-game secrets were blocked with. The TARDIS was also a fun little edition to the game, since it wasn’t only used as a vehicle, but like the DeLorean (Back to the Future Level Pack), it was used as a time machine, and once placed on specific ports, could teleport the player from London’s past, present, and future, depending on the area you were in. And it wouldn’t be LEGO Dimensions without little puzzles, and this Level Pack was full of them, including little server mini games you had to crack using the Doctor.

Speaking of that clever man, lets talk about how awesome the Doctor is… even in LEGO form, he can do no wrong! Using his Sonic Screwdriver (no, fellow Whovians, he thankfully did not have his Sonic Sunglasses), players can break Dalek technology, and unlock areas specific to the Doctor. Did I also mention he’s voiced by Peter Capaldi, the Twelfth Doctor, himself?! The story was fantastic, and it was a lot fun getting to stop the Daleks and Davros as the Twelfth Doctor, myself feeling like the Companion I always wished I could be, but I have to say… it’s what happened at the end of the story that excited me more than anything. Once you beat the story, you are able to unlock ALL of the Doctor’s regenerations! Every time you die, you regenerate as the next Doctor in line! And not only does your Doctor change, the TARDIS music and interior changes to match each respective Doctor! It was a little feature that I think made it for me, and I’m sure it will for a lot of other fans too! I screamed like a massive fan girl when I got to the Ninth and Tenth Doctors!

If you are looking to purchase any of the LEGO Dimensions Level Packs, and want to get your money’s worth, the Doctor Who Level Pack is your best bet. With the length of the story mode, and the addition of the Doctor and the insanely useful K-9 characters, this pack is definitely worth it! If you’re a Doctor Who fan, its an even bigger gain, with the amount of references and nostalgia factor it has to offer. The other fun thing about including Doctor Who to the LEGO Dimensions universe, is that the whole story line could be entirely plausible, from the Twelfth Doctor’s perspective.

The Doctor Who Level Pack is available now for $29.99! Don’t forget, you can catch Doctor Who on Space, Saturdays at 9pm EST! 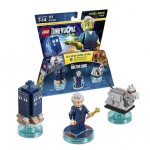 Konami Looking To Create A Prosthetic Limb for Amputee Gamer