Disco Elysium came like an anomaly and shocked the industry. In 2019, the game from ZA/UM has finally made its way to console and I no longer have to scoff at my friends who played on PC two years ago. It’s finally my time to shine and see what all the fuss is about – and thankfully, the wait was worth it and then some.

I couldn’t grasp the acclaim the game had garnered since it launched, playing on PC is tough for me when I’m already in front of a computer all day. Getting out of one mindset and sitting at a desk to play games is a deterrent for me and while my PC is custom-built, I’ve weaned my playtime over the years, relegating myself to consoles.

Now, as I step foot into the twisted world of Revachol, I’m floored by how excellent everything is. The narrative is top-notch and resonates with me, there’s also the isometric gameplay set in a complex world that teems with interesting characters and the combat-less mechanics don’t irk me as much as I thought they would. Instead, my playthrough is heavily invested in solving the murder you’re presented with and getting to know the psychedelic world of Elysium. And since this is effectively known as The Final Cut, the developers have added a ton of new quests, full voice acting and new animation. I’d say the wait was worth it if you’re a fan of the original but newcomers will appreciate all the work the developers have delivered for The Final Cut. 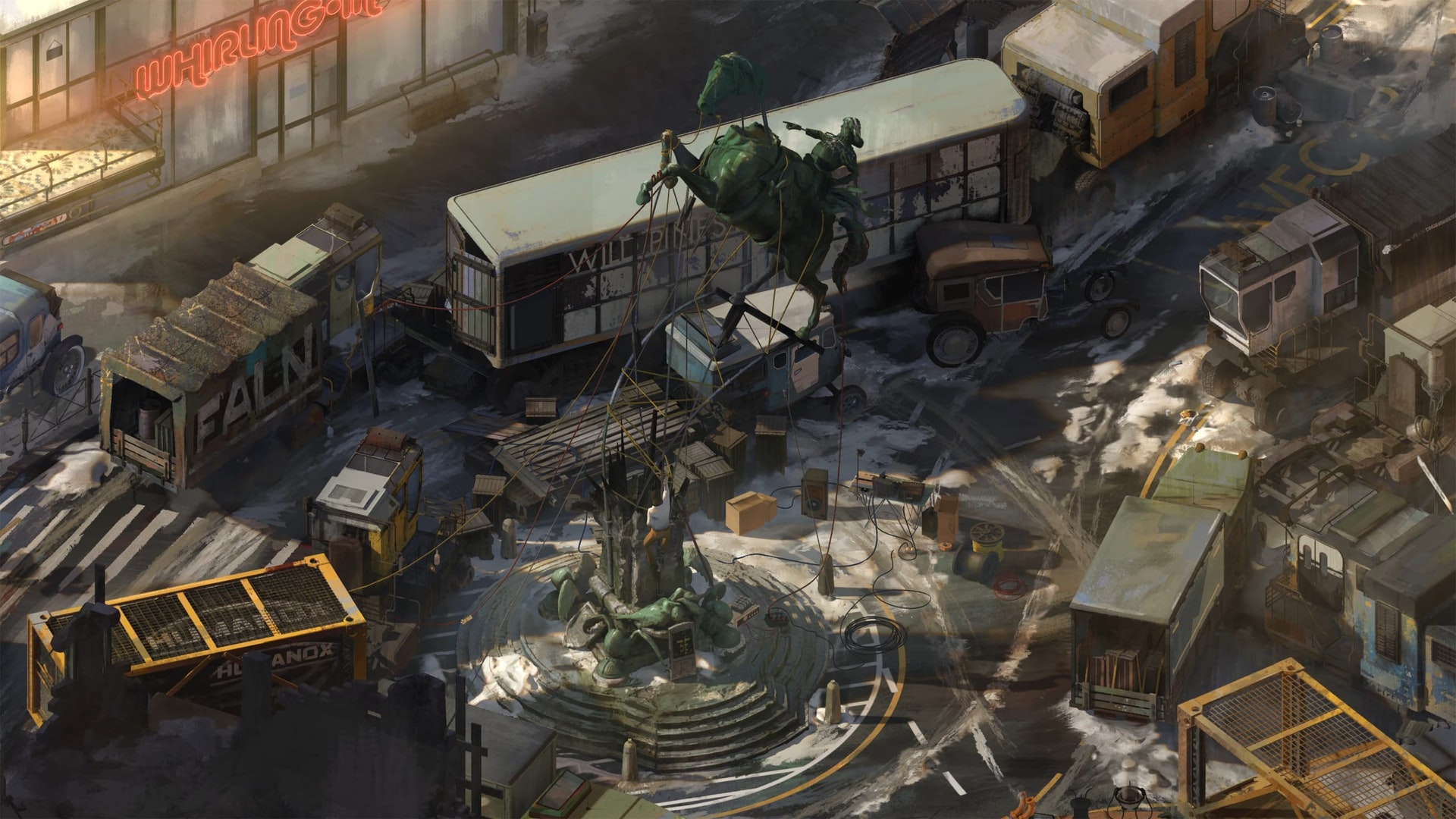 Playing as an amnesiac detective who finds himself in a trashed hotel room, you’re soon tasked with solving a gruesome and bizarre murder that will take all your wits to solve. The thing is, nothing is as it seems and this isn’t an open and closed case, leaving you to figure out what happened over the course of the 40-hour campaign. For starters, your character is a mess and can’t even remember his own name, let alone what he did the night before. How are you expected to solve a murder when you can barely keep it together? Thankfully, you’ll rely on your consciousness to figure things out and to great effect as many conversations take place internally (The Final Cut going so far as to voice these conversations).

From the beginning, you’re able to make use of three builds: Thinker, Sensitive, and Physical. You divvy up your skill points into categories like Intellect, Psyche, Physique, and Motorics. These influence your secondary skills, creating your own unique protagonist and as you level up you spend skills on 24 skills and paired with a clothing system that offers different bonuses and penalties applied to your character.

Furthermore, once the Thought Cabinet is introduced, things get really interesting. Acting as an item you can open from your screen; the Thought Cabinet is a visual manifestation of your thoughts in the game. You’ll need to interact with the citizens of X and in turn, developing who your character is and you’ll rebuild your personality the more you talk to people, uncover events, and upgrade your stats because of it. This is easily my favourite mechanic within the game due to the way it works and how it offers 24 personality aspects representing your character and offering wise words at times or actively pitting you against the odds. We’ve all been there before and our internal voices goading us or cheering us on and the game does an excellent job bringing that internal struggle to life. 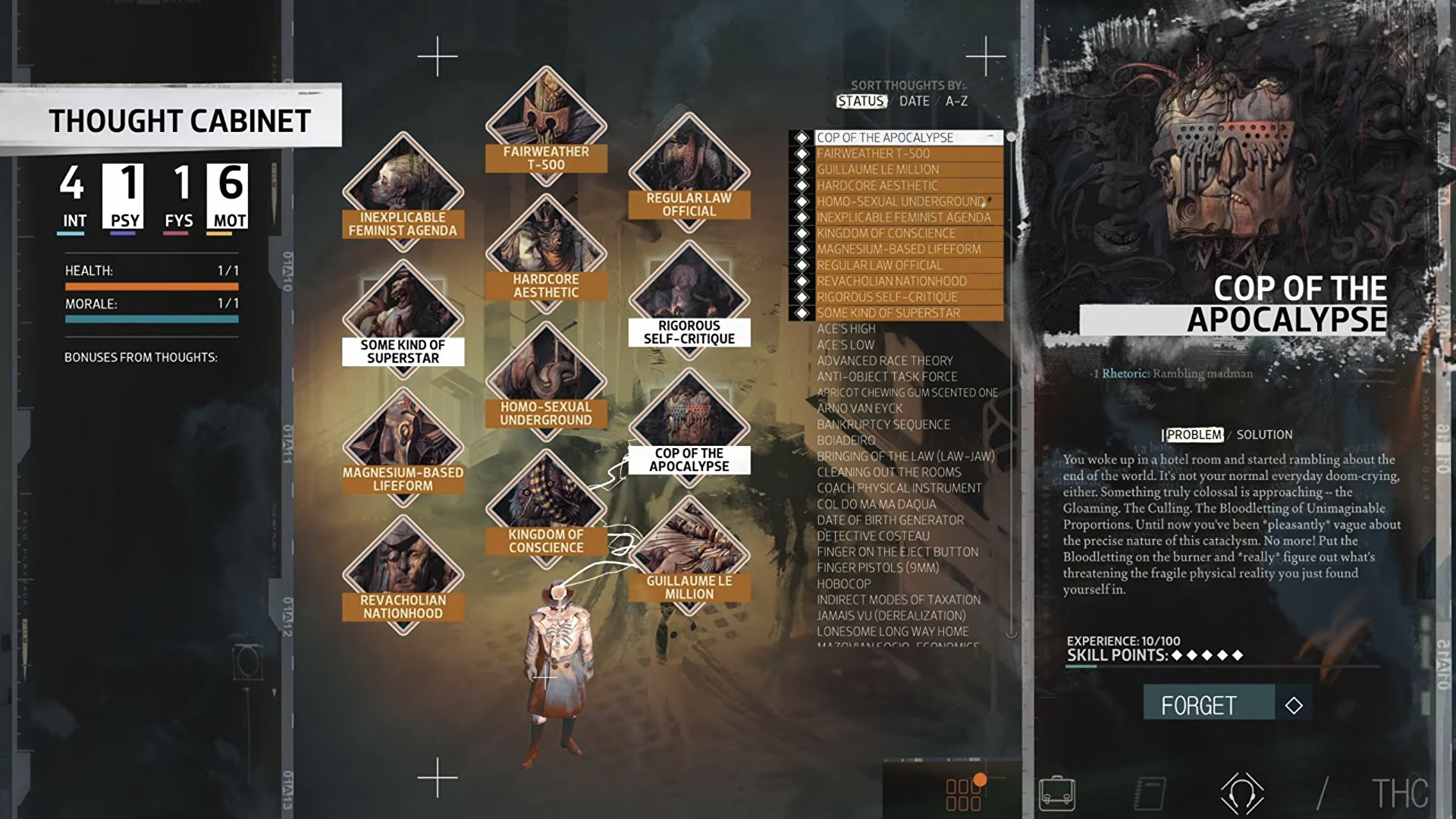 I’d even say Disco Elysium: The Final Cut falls in line with being a visual novel more than a traditional isometric RPG. You have tons of dialogue to wade through, oftentimes revisiting and investigating dozens of memorable characters that feel fully realized. Each time you speak to them you may learn something new or you’ll stats may allow you to say something that wouldn’t have worked previously, opening up more opportunities. 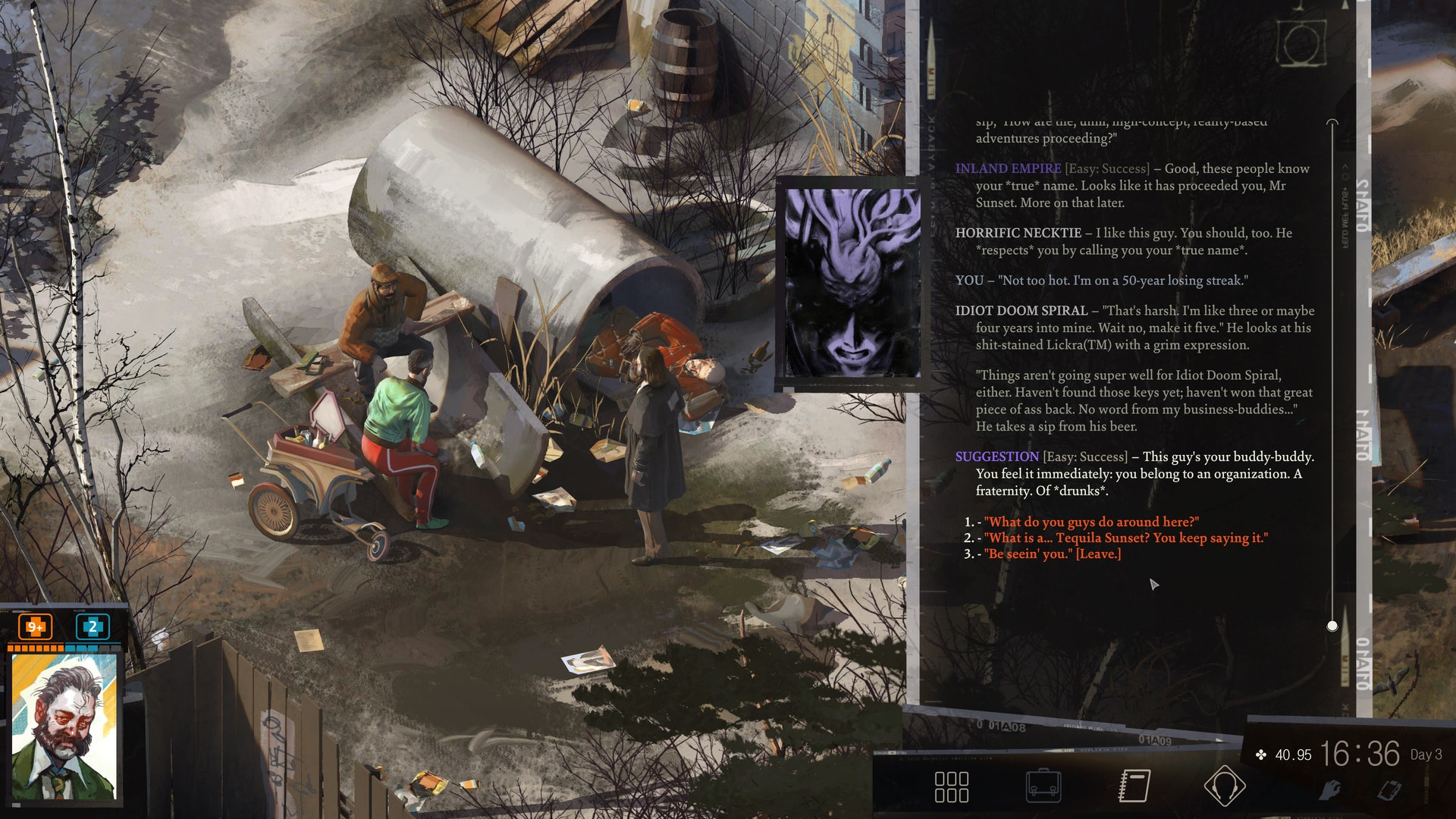 And this all works well because the writing is top-notch, the storytelling succeeds in building a world rich in lore. We only explore a sliver of the city of Revachol but the city is rife with political misfirings thanks to failed revolutions. Speaking to the residents and piecing together years of lore to understand this downtrodden society never ceases to amaze me at times. It is clear that the more you dig in and uncover, the more you appreciate the writers and the amount of thoughtfulness they brought to create this environment.

And since you’re talking to people and trying to grasp the situation, a lot of what you do and say bolsters your interactions with others and how they perceive you. I didn’t expect to see such deeply linked systems here but what I said and did affect the outcome of my playthrough in ways I should have spent more time considering. If for example, you say the wrong thing or even offer them false information, it will come back to bite you. Many of your successes and failures come down to dice-rolls and whether you’re investing skill points in the right areas. The only downside I’ve noticed is that it is sometimes hard to dissuade which skill to improve so I can get the results I want and earning skill points is time-consuming so revisiting things is often recommended, if only to see what you missed out due to being underdeveloped. 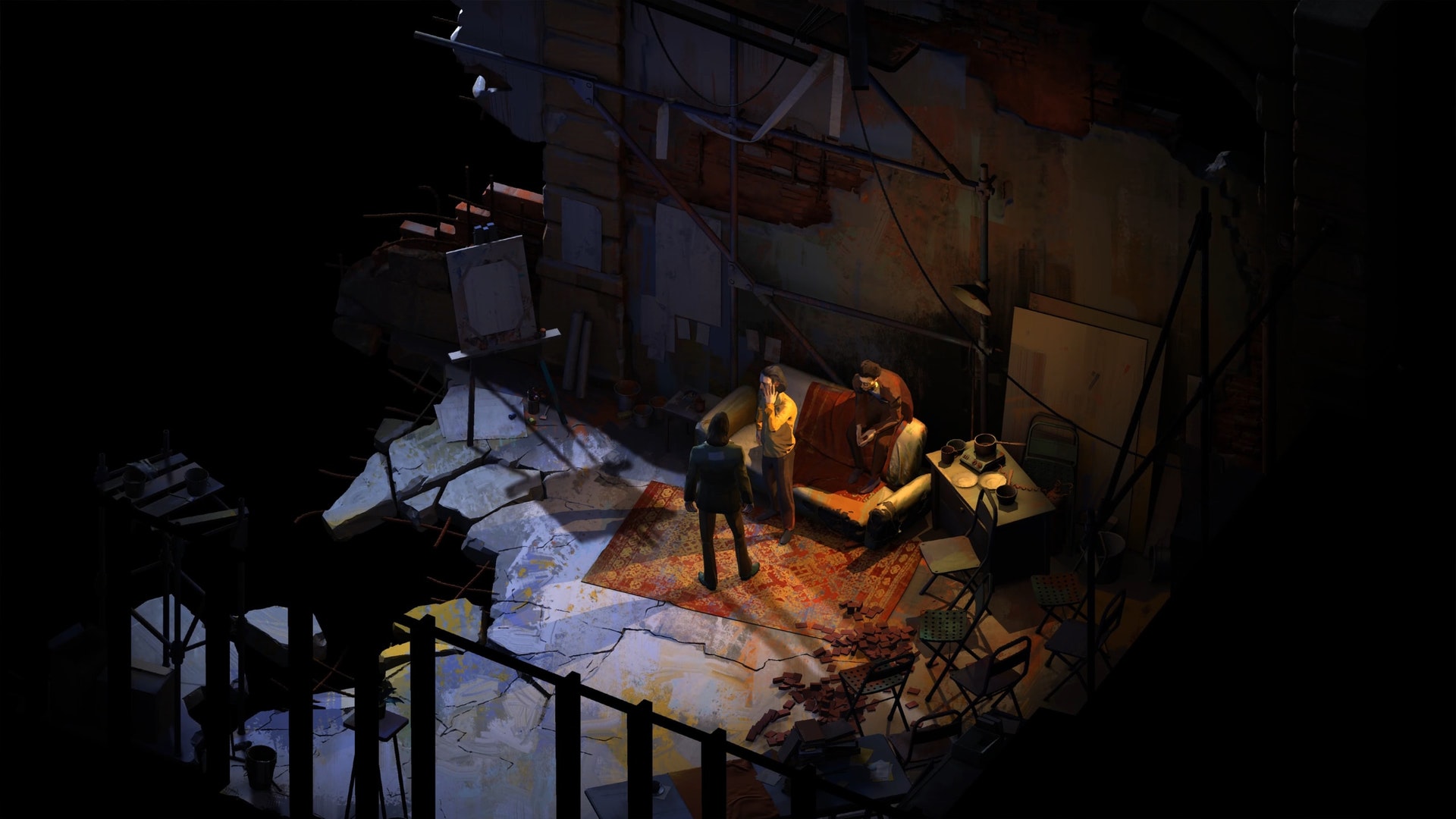 Technically, there were some rough spots and it mostly had to do when being in conversation and having the voice actor’s line cut off mid-sentence. There are other minor things like exploring the map, which was clearly made for a keyboard and mouse and it’s hard to see some things at times due to that folly. I’ve also run into instances where I can’t progress during certain scenarios, leaving me to move on and hope that they are fixed later down the line. Developer ZA/UM is aware of these issues and is working on actively addressing them, but even with the latest patch, there are lingering issues affecting PlayStation users.

And while I appreciate the gorgeous 4K visuals paired with an aurally pleasing soundtrack, the technical hitches the game faces on console need to be discussed. As I mentioned, navigation is a sore spot for the port and while I can work with it as it is, I would have liked something smoother that makes interactions feel better. And, in some instances, the game’s framerate takes a dive in some places. And while I’ve only found a few instances of being locked out of quest completion, that’s enough to keep me away from the game. Granted, we are in the midst of a pandemic and I will always support small developers but that also comes with accountability in ensuring your game works without the risk of being broken. But at the end of the day, I think Disco Elysium on console could have used a bit more time in the oven.

Disco Elysium: The Final Cut was worth the wait and easily one of the best narratives I’ve experienced in ages. While there is no combat, there’s enough inner turmoil that makes each conversation a battle in itself. Each character you encounter is interesting and going back and talking to each of them over and over is memorable and recommended to get a better understanding of things. I’m already excited to go back and start another playthrough and see what I missed the first time. There are so many choices to consider, new branches to discover and that right there is exciting enough for me to dive back in.