Review: Deliver Us The Moon

I did not know what to expect when I started up Deliver Us The Moon and I’m happy to say I liked what I played. Developed by KeokeN Interactive, it was initially revealed on Kickstarter and was successfully funded on the crowdsourcing platform.

Deliver Us to The Moon is a science fiction action-adventure that is focused mostly on its story rather than gameplay. During different sections of the game, it can be played in the first person, but for the rest of the game, your character is played primarily in the third person.

It’s not necessarily a game that delivers master class gameplay but it does a couple of things very well that hooked from the start, one of those things being the game’s narrative.

Deliver Us a Story

The story takes place in a world similar to our own in the not so distant future.

In 2030, the world faced a global energy crisis that depleted the planet’s resources. The solution to the problem was the moon, more specifically a powerful isotope, Helium-3 discovered on it that could meet Earth’s energy demand for decades.

The World Space Agency (WSA) then colonized the moon in 2032, settlements were constructed to harvest and process the isotope. The energy was then sent to earth through the moon’s advanced satellite network.

Everything was going well for Earth, it jumped back from the energy crisis with the Helium-3 energy the lunar colony was sending.  It was anyway until 2054 when the energy stopped coming mysteriously as the lunar network went offline.

With no way to reach or contact the moon colony, the WSA was disbanded in 2055 and the Earth was back where it started in 2030.

The game starts five years afterward, former WSA astronauts couldn’t accept their fate and gathered up resources to send a single astronaut to the moon.

You play as that astronaut and it isn’t until the end that you learn who you’re playing as and the reasons behind it. Your mission is to find your way to the moon and turn the energy network back on. 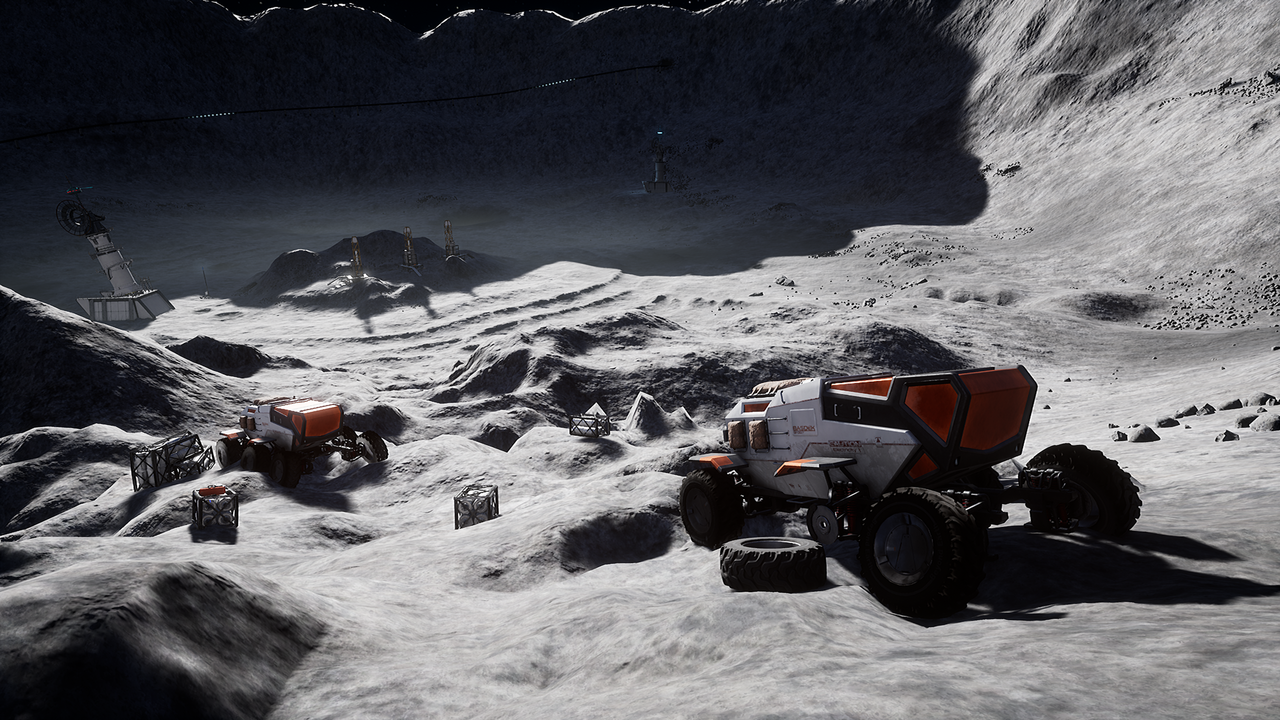 Deliver Us The Moon is very direct in how it tells the story at the basic level, but how it expands on it through environmental storytelling is what brings the game’s narrative to the next level.

The way it does this is obviously through the environment of an abandoned space station and moon settlements. Other aspects include tablet emails, items left behind, audio recordings and hologram recordings of conversations.

The way it tells that story is very reminiscent of another game of a similar setting, that being Tacoma. Actually taking the time to listen to those two recordings is how the game really tells you what led to the previously mentioned events of the game.

The revelation of the narrative doesn’t have to do with anything you’d expect from the sci-fi genre like aliens or a space disease that killed everyone. No, it’s more focused on a fostered culture within the lunar colony that just abandoned for selfish reasons.

Going from the story to the gameplay, the game felt plays like any popular walking simulator game. It’s easy to criticize Deliver Us The Moon for what it is and not what it tries to be.

While most walking simulators from smaller developers feel isolated from the game’s world Deliver Us The Moon takes the opposite game design approach. The fate of the earth’s survival and much more is pretty much on your character’s shoulders like a serious big-budget sci-fi movie.

While the gameplay is simplistic, it’s used in a way to support the game’s story rather than going in a different direction that could feel disjointed. When I started I thought it was going to be a first-person game only like Tacoma but I quickly found out that was not the case.

When you start, it’s very much a first-person game but after a minute into the game when your character out on his spacesuit it shifts to a third-person perspective. It’s a welcome change because third-person games are the ones I enjoy more as it makes it easier for me to connect to the character I’m playing as. 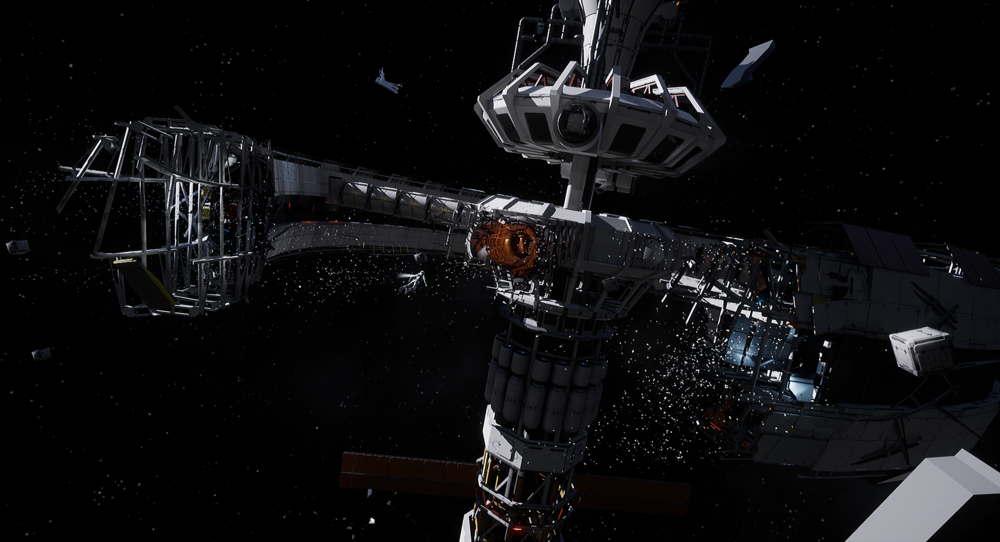 Especially when your character finds himself on death’s door multiple times while almost running out of oxygen in the character’s tank that lasts exactly three minutes. Which the developer showcases on the back of your character, something you could not see in the first-person.

To extend the tank the developer has left small oxygen containers to slightly fill up your oxygen. It really does help especially during set-piece moments where you’re sucked out into space and desperately trying to float back to the space station.

it’s very helpful especially while flailing in space trying to get to the oxygen safe rooms spread out throughout the lunar base.

It isn’t the only obstacle in the game, as it features multiple puzzles that really make you think about your approach. It isn’t as simple as just walking from one point to another, the developer really tries to make the game feel like a fulfilling journey with twists and turns in a short amount of time.

It feels almost worth especially when you get to the moon and see Earth from that magnificent lunar view. It’s a sight to behold because it’s the first moment – as well as many moments afterward – for myself after when the game’s graphics really popped. Throughout my five to seven-hour play-through, I think there was at least an accumulated hour where I was just turning my camera to take in the environment.

Deliver Us to the Moon is just an aesthetically beautiful game to take in, especially when you get on the moon and walk on the lunar surface. Which has some wonderful easter eggs if you look hard enough for them, their was one that made me laugh out loud.

One thing I can knock the game for is the amount of crashing I faced when playing the PlayStation 4 version through PlayStation 5’s backwards compatibility. When I was within moments of launching the rocket so I could actually start the game properly, it crashed on me.

This issue worried me, and left me panicked because I thought the game bricked on me like other users, this was not the case but I tried relaunching the game multiple times even the console itself.  I had no luck, the game was pretty much unplayable, I don’t blame this on the developer as the kinks of the PS5 launch need to be ironed out as backwards compatibility is one of the things Sony needs to improve stability on. 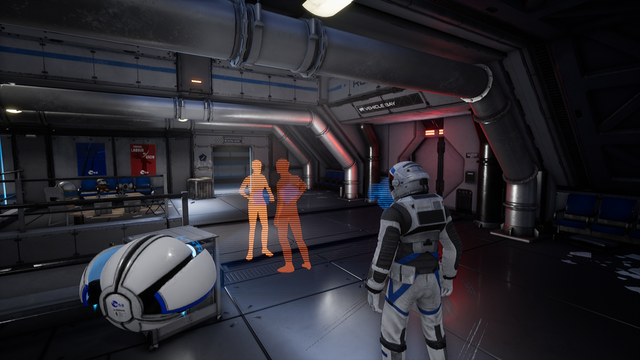 After that, I dusted off my PS4 and hoped I could play on that console instead, thankfully it was a much more experience but I was pretty sour on my PlayStation experience with the game. Playing Deliver Us The Moon is not perfect as the game slightly freezes when you get to a checkpoint which happens a lot. I’m aware this is something that shows up on any console version, it’s not game-breaking but it takes me out of the experience.

I didn’t want to be sour on the game so after beating the game on PlayStation – a day after I started the game – I started it up again on my Xbox Series S thanks to Xbox Game Pass. The game ran perfectly for me for 99 percent of my time with it on Xbox. There was hiccup were late in the game I could see through the walls, after reloading my save it wasn’t an issue for me again.

Deliver Us The Moon is a commendable game that tells one of the best sci-fi stories I’ve experienced in recent memory, that goes not just for video games but other mediums as well. It ends in an exciting way that feels like KeokeN Interactive sets up themselves for a sequel or an expansion at minimum. The story and visuals will hook into the space experience as you play in a genre that you might find familiar while it tries to be unique. I would recommend this game to anyone in a heartbeat. Especially if you’re an Xbox Game Pass subscriber, you don’t have an excuse to not pick it up as it feels like a journey that respects your time.