Some days going into the office turn into mundane, mind-numbing work. We’ve all had those moments at one point in our lives and it is made worse when things never go according to plan. If that doesn’t like your cup of tea then I have some good news because Death’s Door isn’t anything like that but it takes the idea of going to work and takes it to interesting places. Acid Nerve, the developer behind boss-rush title Titan Souls returns with a stellar follow-up where the player joins the Reaping Commission as a fledgling reaper.

Death’s Door is one of those titles you may have seen during the ID@Xbox Showcase. I’m always searching for exciting indie titles these days and while there is an abundance of titles to pick and choose from, my biggest problem is finding the gems and playing them. Playing as a crow on his way to becoming a reaper, your job in the afterlife is to reap souls in order to ensure your soul isn’t taken. On the off chance, one of your assignments doesn’t go according to plan, so you’re left to follow the thief who took your high-value target from right under you.

The reaper is also a charming protagonist who lives in a macabre world you’d second guess comes from the mind of Tim Burton and you feel the influence in the characters and environments from the early moments right until the end. Acid Nerve’s inspiration for the aesthetic doesn’t stop there though as the studio has confirmed they looked to legendary Studio Ghibli, and also The Legend of Zelda, resonating within the game’s mechanics and core gameplay. 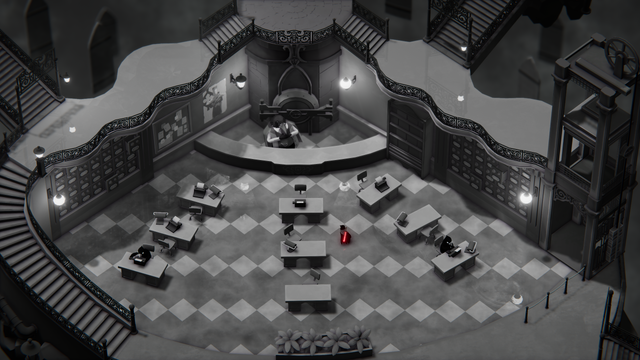 Your protagonist begins with a weak arsenal including a sword and bow, and some minor agility moves like a roll. Battles play out in a tough but fair style where learning to master timed strikes or dodging at the opportune moment to minimize damage. Learning when to stay back and fire ranged attacks while not taking much damage – whatever I was trying to do to ensure my survival felt satisfying with responsive controls with nearly every encounter. So much of what makes Death’s Door so entertaining so the combat. It’s fun playing as a reaper and consuming souls through close-range combat and using spells and your bow to whittle them down to nothing. 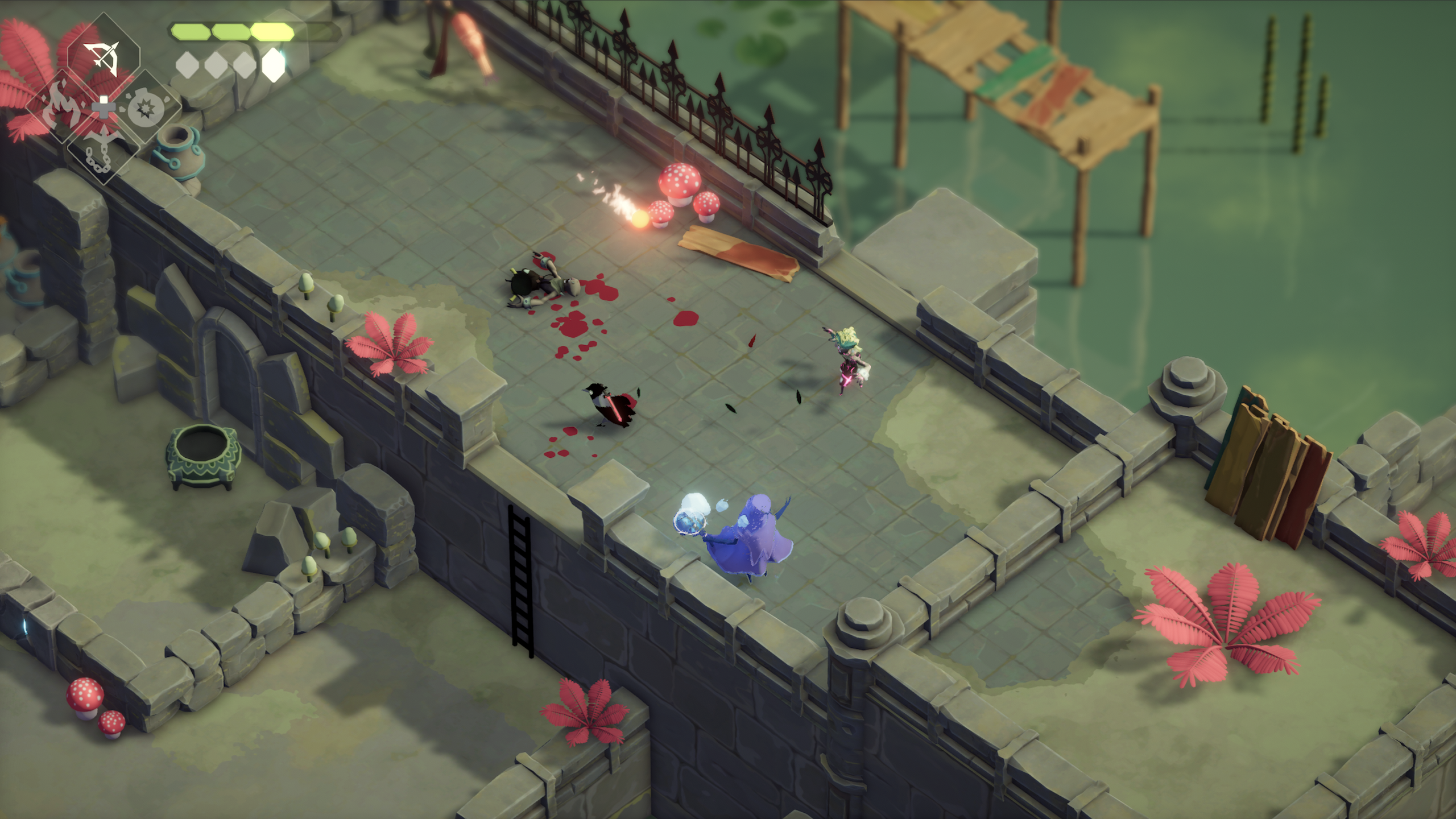 Spread throughout the game are other weapons including a dagger that swipes a bit faster or a hammer that uses elemental damage. Somehow, the most rewarding weapon I stuck with was the sword since the difference between each weapon’s damage output feels insignificant. Your biggest worry in combat is often left to how much damage you can do before being hit. You can’t upgrade the weapons individually, instead, you’ll upgrade stats like your strength, speed, dexterity, and magic to become stronger. 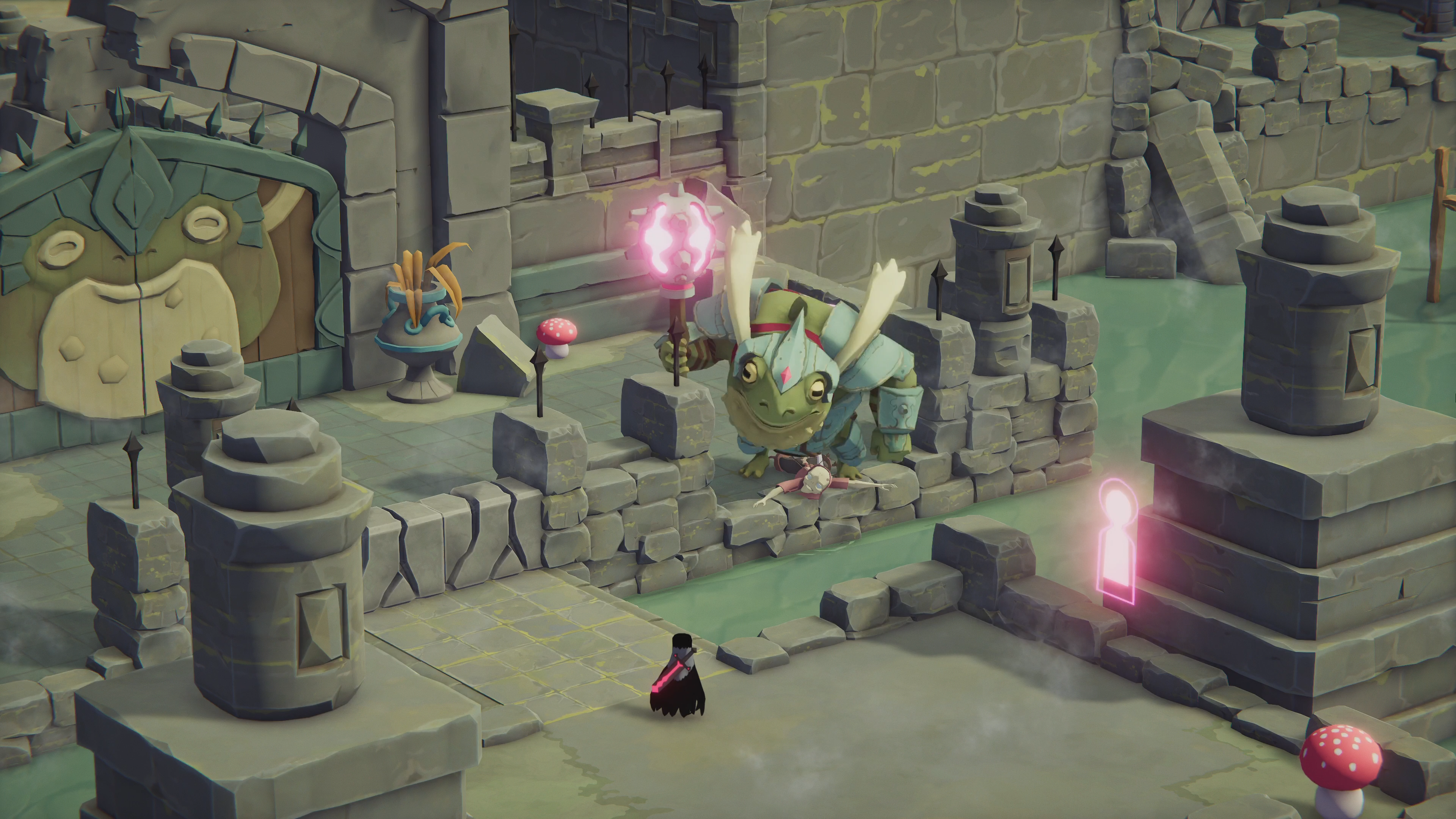 The game isn’t overly difficult but offers a worthwhile challenge, throughout my 10-hour playthrough I never felt overwhelmed to the point of frustration. It also helps that each environment has a health station you unlock by planting seeds you find by exploring the area. By giving the player autonomy on where to place health stations makes things exciting as it is crucial to survival and a key component to the risk vs reward mechanics of it all. 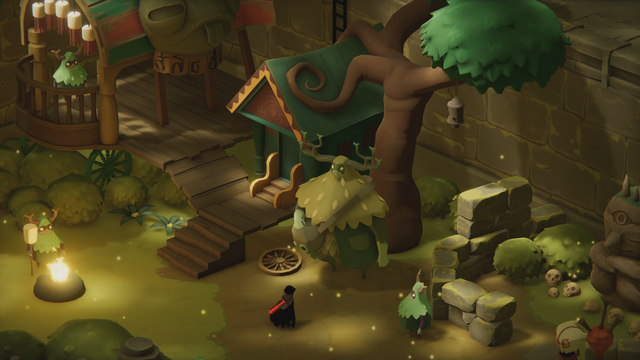 Checkpoints make dying a bit more viable and progress isn’t lost if and when you die in Death’s Door. I mostly perished during boss battles but the system puts you right back where you were, making the game feel forgiving of your transgressions. My favourite highlights of my time were conquering the bosses in Death’s Door. With each encounter, you’re left needing to utilize your full set of abilities to conquer the enemy. And with each new boss, you’ll face you’ll need to unlock new abilities to get there. These abilities are generally fun to use and help get you situated with the tasks at hand before culminating in a boss battle. 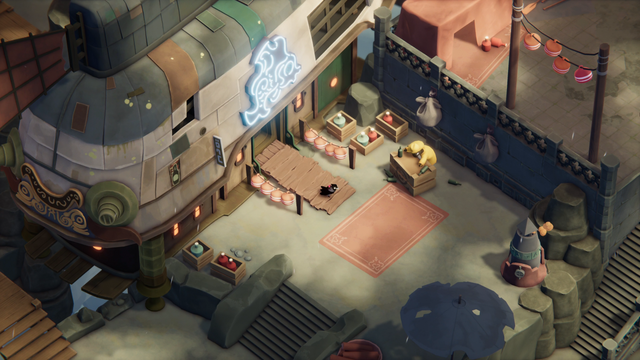 Each area feels unique, it is also wonderfully minimalistic in a good way, resembling detailed dioramas inviting you to seek out their secrets. Some may contain hidden passages with rewards waiting on the other side, there are always shortcuts to discover, making exploration much more palpable. Much of what makes progression work is how it is doled out, with the right abilities making your press onward into the unknown. 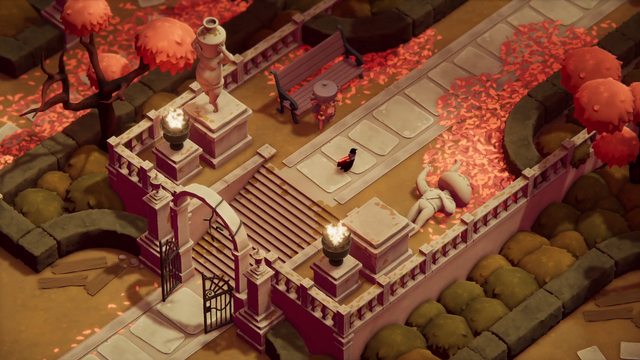 Whether it is a sunken ruin or a graveyard, you get the feeling these dilapidated areas no longer support life. What caught my attention was the sense of wonder I’d get when searching for the hidden secrets within a level, seeking those upgrades and bonuses to become stronger. I’d haphazardly come into contact with a shortcut making travel much less cumbersome and because of how wonderfully designed each stage I found myself searching every nook and cranny for secrets. Being curious is often rewarding and with Death’s Door, you’re often rewarded for going off the beaten path. 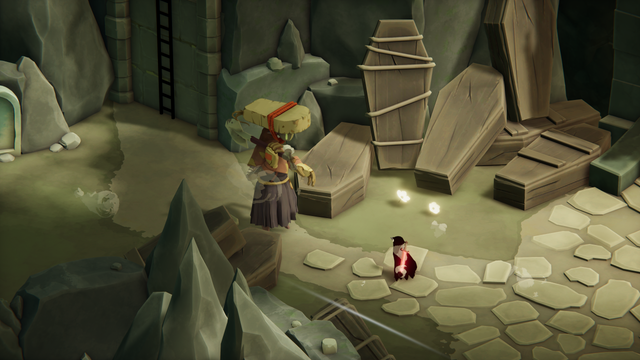 With Death’s Door landing on PlayStation and Switch this week, I wanted to dive in again and see how the game does on Nintendo’s console. Whether it is handheld or docked to the television, Death’s Door plays at 30 FPS and the game does have a noticeable but minor slowdown. On the one hand, being able to take this game on the go is a concession I’d be willing to make given how good the gameplay is but, on the other hand, it’s nice to be able to play this at 60 FPS.

If your primary console isn’t the Switch, then I would recommend getting it there. This is one of those ports that are good and you’ll have a great time playing Death’s Door but it won’t shine unless it’s on another console.

Death’s Door has a ton of heart and doesn’t take itself seriously. If you want something to play with satisfying combat and the opportunity to explore a mysterious world, then look no further. I knew I was sold early on; Death’s Door is a beautiful-looking game paired with a challenging, but fun combat system that respects your time. At the end of the year, Death’s Door will be the talk of the indie world and I’m expecting Acid Nerve to win some awards for their work. Everything about the game feels like a labour of love from the developers and you see that throughout the game in the content, the designs, and the music.