I’m not referring to the underrated Tom Cruise film. No, this is the basis for Arkane Lyon’s latest game Deathloop and a premise you will become quite familiar with while playing. Deathloop, while feeling a touch familiar in its Groundhog’s Day premise, is an absolute delight to experience and executes on its unique vision.

Being a timed exclusive on PlayStation 5, I grew worried that Sony and Arkane had begun to show off more Deathloop than I needed. I wanted a genuine surprise and I thought I’d be walking in with most of what Deathloop has to offer already on the table. I was elated to discover that despite the numerous trailers, previews, and developer stories, nothing began to scratch the surface of what the game provides players.

Deathloop feels like Arkane threw on a chef’s hat, mixed Dishonored, Hitman, and Deus Ex in a pot, added a pinch of ’60s flair, two cups of badassery. Although I didn’t think I’d be too hungry, I came back for second and thirds and am writing this with a full belly. Deathloop is unabashedly an Arkane game and while it’s not without its rough edges, this outing is one of the most creative experiences I’ve played in recent memory.

Deathloop hinges around the concept of a time loop. Players are introduced to Colt, the former head of security on Blackreef isle, an army base now turned into the playground of strange residences known as Eternalists and an even stranger 24-hour time cycle. As you can imagine, this has turned into a waking nightmare for Colt. Vowing to gain freedom for himself, Colt attempts to break the loop. Only, it’s not as easy as it seems. As the day concludes, Blackreef resets to the very same morning. If Colt dies, the day also resets itself and you once again wake up on a beach. Upon each morning, Colt only retains what he’s learned and loses all weapons and items accumulated thus far. 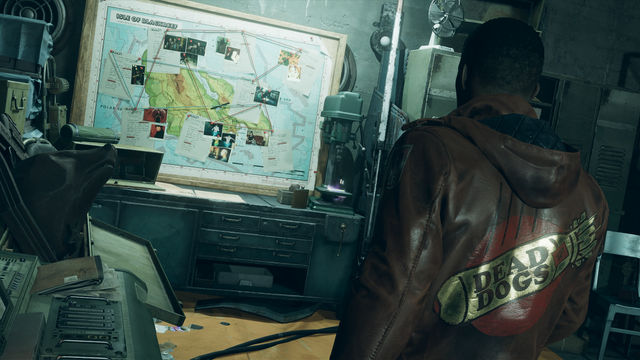 Through natural progression, you learn that in order to break the loop, you must kill eight targets around Blackreef. Eight targets in a day? Can’t be so bad, right? Well, there are a bunch of caveats standing in Colt’s way. For instance, Blackreef is split into four different regions. Moving between each location progresses time between morning, noon, afternoon, and night. Though, unlike The Legend of Zelda: Majora’s Mask, time does not advance when you’re exploring a region. Additionally, each of the eight targets is only accessible in specific locations, at specific times during the day. This window of opportunity will often time overlap with one another. You can now imagine how difficult it is to achieve the goal of killing all eight targets before the day concludes.

Oh, did I mention that everyone and their mother on Blackreef want Colt dead? As you’ll quickly discover, the Blackreef Eternalists are fond of the loop and would rather Colt not mess with a good thing. This includes a notable target, Julianna, who swears to protect the time loop. She will consistently interact with Colt and attempt to stop him by any means necessary, even through violent means. The rivalry between Colt and Julianna not only opens the door to some grade-A banter and allows the deeper subtext of Deathloop to unfold, but also gives way to the game’s multiplayer.

Not Enough Time in the Day

Writing about Deathloop’s moment-to-moment gameplay is uniquely challenging. So much of the game’s progression is tied to natural discoverability. Additionally, there are many granular systems constantly at play. Detailing any of them feels as though I’m ripping a small piece of what made Deathloop so enjoyable away from you, the reader. Keeping things somewhat vague, Deathloop kicks off with a guided path, allowing you to get your feet wet. Overcoming Deathloop’s core hurdle, you’re going to have to figure out how to execute on the “perfect run”. That means killing all eight targets before the day has concluded and stay alive long enough to see it through to the end. This will mean a lot of trial and error is needed. Thankfully, you will have help throughout your journey. To start out, you’ll be lead to kill a target who possesses the means for Colt to gain an ability called Reprise. This ‘Slab’ allows Colt to “die” twice before the timeline resets. Additionally, Colt will gain the ‘Infuse’ ability, which enables the player to save weapons, traits, and other collected Slabs, to retain for future loops.

You’ll then be left to your devices. You can then make your way through each district, slaughtering Eternalists and ultimately each target, earning new Slabs and high-powered weapons. Though realistically, as the dust settles, you may only have killed four or five before your back on the back in the morning. To make meaningful progression, you’re going to have to learn the routines of each target and find a way to group them together. You’ll find that many targets have a unique relationship with others. Though, finding out how to make use of that information will require a little work on your part.

Following the Red String of a Corkboard

As you follow the individual threads, you’ll have to travel between each district of Blackreef and begin investigating ways to pull off the perfect run. This will involve a lot of back and forth between areas in order to reach the conclusion of each target’s thread. As you travel through each district at different times of the day, you’ll notice that small details will change. The number of enemies and their locations will change. I found myself adapting my loadouts between district transitions and becoming accustomed to the harder difficulty in the evening. 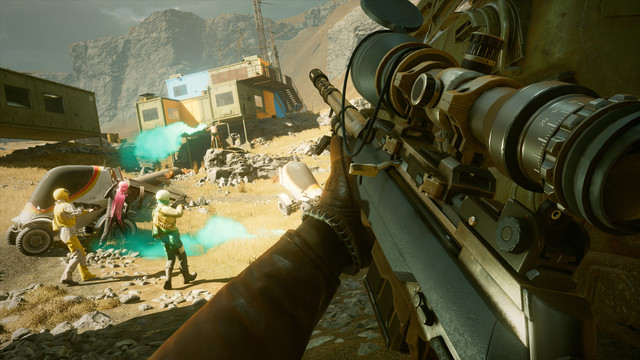 Of course, all the while you’ll be avoiding (or steering directly into) combat. Arkane’s Dishonored DNA is exemplified here as you quickly go between a machete chop to an enemy’s head to a shotgun blast to another. You even have access to other abilities like the Swift Slab that lets you teleport to nearby locations. Blackreef becomes a colouring book of possibilities inside and out of combat. Arkane not only gives the player a large box of crayons but encourages players to colour outside the lines. Will it get messy? Absolutely. But it’s a rewarding experience throughout.

Deathloop’s entire framework is comprised of complex systems all intermingled. As I began to peel the layers of the onion back, I was consistently surprised at how well they all meshed together. The element of a progression in time introduces sub-stories to unfold before you. In one instance, I had to uncover a keycode for a building by logging into a computer in a different distinct. The only catch was that the building the computer is found in is the victim of an electrical fire during the day. So, I had to return, stop the fire from happening and come back once again after the code was sent to the computer. However, some of Deathloop’s progression puzzles are a bit more obtuse than others. The lead you’re following will sometimes be so vague you’ll only be given the area you must explore. Finding exactly what you’re looking for is sometimes more frustrating than it is fulfilling. Though, these occurrences are few and far between.

Deathloop — A Game of Cat and Mouse

The one target who’s primarily out to throw a wrench in your plans is Julianna. She has a bone to pick with Colt and will do anything in her power to preserve the loop. This even means coming out of her hiding place to kill you. Julianna’s incorporation introduces Deathloop’s multiplayer aspect, where another player can invade your game and try to kill you three times and reset your timeline. This can be anyone from another random player, to someone on your friendslist, to an AI. It’s all dependant on what you set your game to. 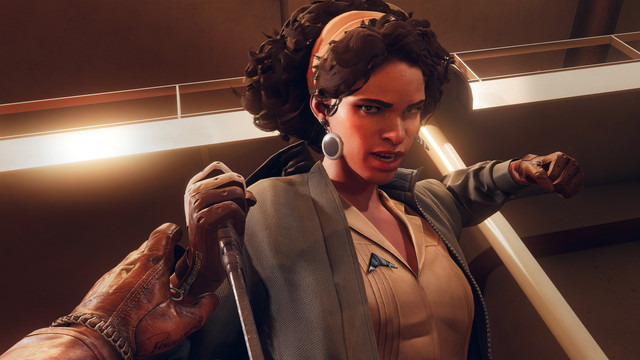 On paper, this sounds like it can be a broken and frustrating system. However, Julianna’s invasions are some of my favourite moments in Deathloop. They require you to flex a bit of competitive skill, using everything in your arsenal to kill her and send her away. While the invader will need to run the full course of your Reprise, you’ll only need to kill Julianna once to gain a bit of safety.

When you’re invaded, you’ll receive a notice that Julianna has spawned somewhere within the district. The exit tunnels between each region will be locked down and you’ll have to hack a device on the map to leave the area. At the same time, you still have your objective to complete so it’s often wise to stay vigilant and be wary as you continue on. As Colt, you’ll want to hack turrets and security sensors, which can help deter Julianna from following your path. This is also where memorization of the map comes in handy as you’ll be able to target places you can monitor or flee if need be. Killing Julianna will offer high-powered weapons, Slabs, and weapon perks.

If you choose to play as Julianna, you’ll have access to the same abilities, weapons, and perks you’d have while playing as Colt with two exceptions Julianna has the ability to change her appearance and look like a common enemy. Additionally, Julianna can ping Colt from afar and notify nearby enemies of Colt’s location. Julianna has her own progression system and ranking system. Using specific weapons or methods to kill Colt will reward the player with points to go towards her rank.

Playing on PlayStation 5, the game does feature some minimal DualSense support by way of adaptive triggers when shooting weapons, and haptic feedback in each of Colt’s steps. It’s nothing overly fancy or anything we haven’t seen before. However, Deathloop is the only game in mind that uses the DualSense’s microphone so liberally. Each time Colt speaks to Julianna, her voice will be relayed through the controller’s speaker. It’s quite novel and plays into the layering of audio within the game. Although Deathloop is built for PlayStation 5 and PC, the graphical fidelity isn’t groundbreaking, especially the character models. I did run into sluggish framerates throughout my playthrough and a handful of crashes while navigating the menus.

Despite thinking I had a roundabout idea of what I was getting into, Deathloop exceeded my expectations and has completely sunk its hooks in me. The simple throughline of having to successfully pull off the perfect string of murders is backed by so much complexity that it helped propel Deathloop to sit as Arkane’s crowning jewel.

Deathloop is deserving of a playthrough with fresh eyes and nothing spoiled for the player. So much of what makes the smallest of moments memorable is the way a revelation is given to the player. Arkane’s execution of level design, gameplay, and storytelling are all intertwined and work together in unison. Although not all aspects of the open-ended gameplay approach are as strong as others and it could have had one more round of polishing, it rarely gets in the way of making Deathloop a standout in the current PlayStation 5 catalogue.

Deathloop will likely stick with me for the remainder of 2021 and beyond. It’s a game I’ll continue to think about day in and day out. This is the kind of loop I can get used to.