In the few years following the release of Death Stranding, there have been very few, if any, major titles that have come close to gripping me as Hideo Kojima’s first game as an independent developer. Two years on, how does Death Stranding hold up under the Director’s Cut banner? Really well. In fact, after messing around for a few hours on my old cloud save, I decided what Kojima recommends and began a new save file to experience the new content built right into the game.

Personally, I had few problems with traversal in Death Stranding and found enjoyment in the silence of moving from one settlement to the next, avoiding Mules, BTs, and Timefall. Generally, the flow of moving round got better the further into the campaign by opening up more pathways, better tools, faster vehicles, and better schematics to expand your world. Once ziplines became readily available to the player, the world began to connect in such a satisfying and fascinating way.

Death Stranding Director’s Cut is much less of a grind

Now, Kojima’s found a few additions to traversal that shake things up for the returning players. When Sam takes on a delivery, he must deliver it safely with minimal damage to the package to earn a better score. Sometimes, through no fault of your own, Sam would take a tumble or in my case, get brave with crossing and hope to survive. By adding the newly evolved stabilizers Sam can use that help minimize damage from impact when jumping from higher areas. I’m someone who tests the limits on what I can put my character through without dying — Kojima has given me the tools to alleviate these risks. 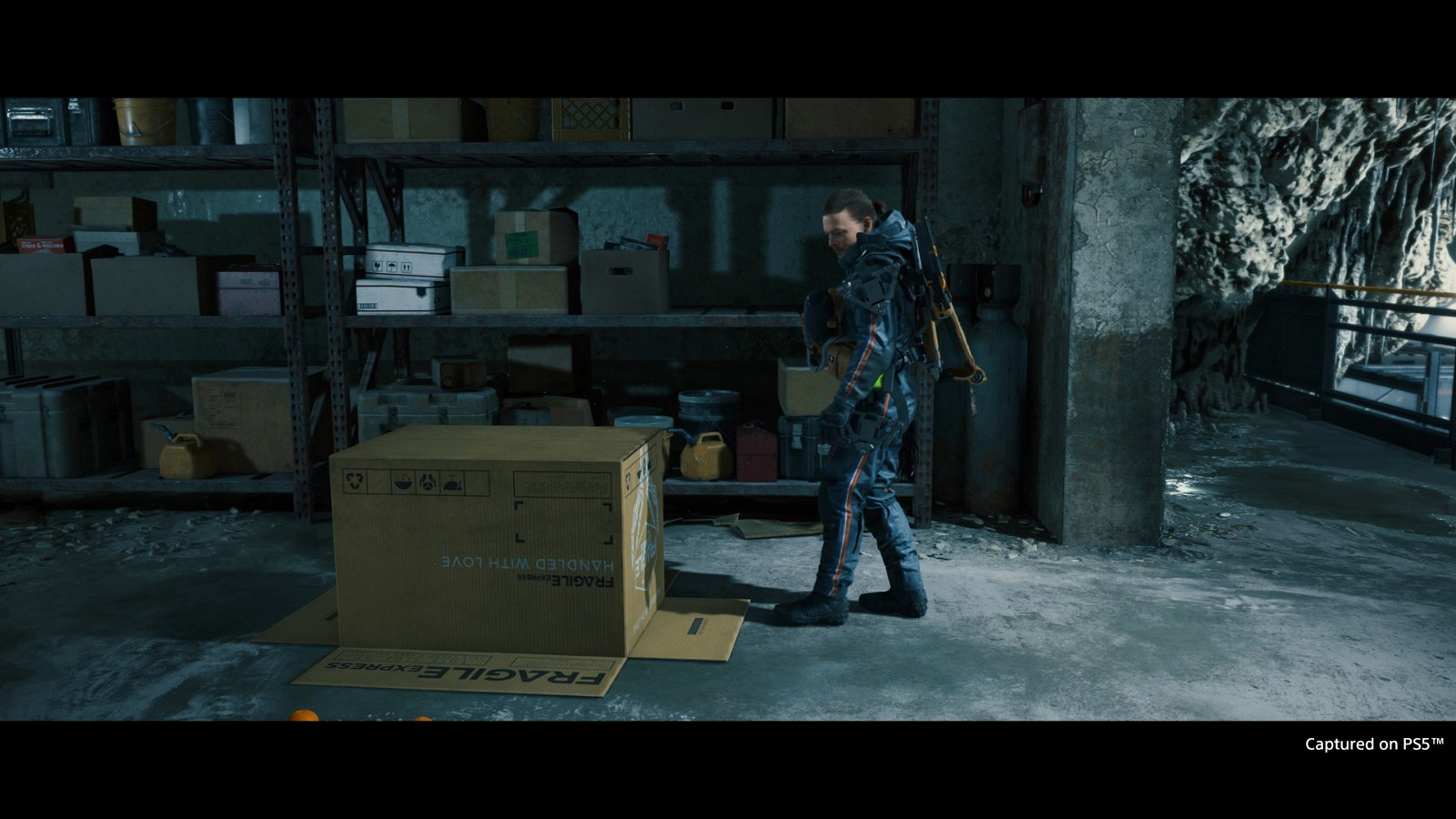 Humorously, there’s also a catapult found in-game that I’m fuming we didn’t have a few years ago. Gone are the tedious deliveries where I have large, heavy cargo holding me back. Instead, I can fire said deliveries via catapult and coordinate the landing within a marked area. Each delivery is equipped with thrusters, and you’ll need to guide the package to the landing zone. Alternatively, while it is effective, you do still have to go to the area and deliver the goods yourself. These are particularly good for ensuring Mules or BTs don’t take your items by effectively going around the threat. 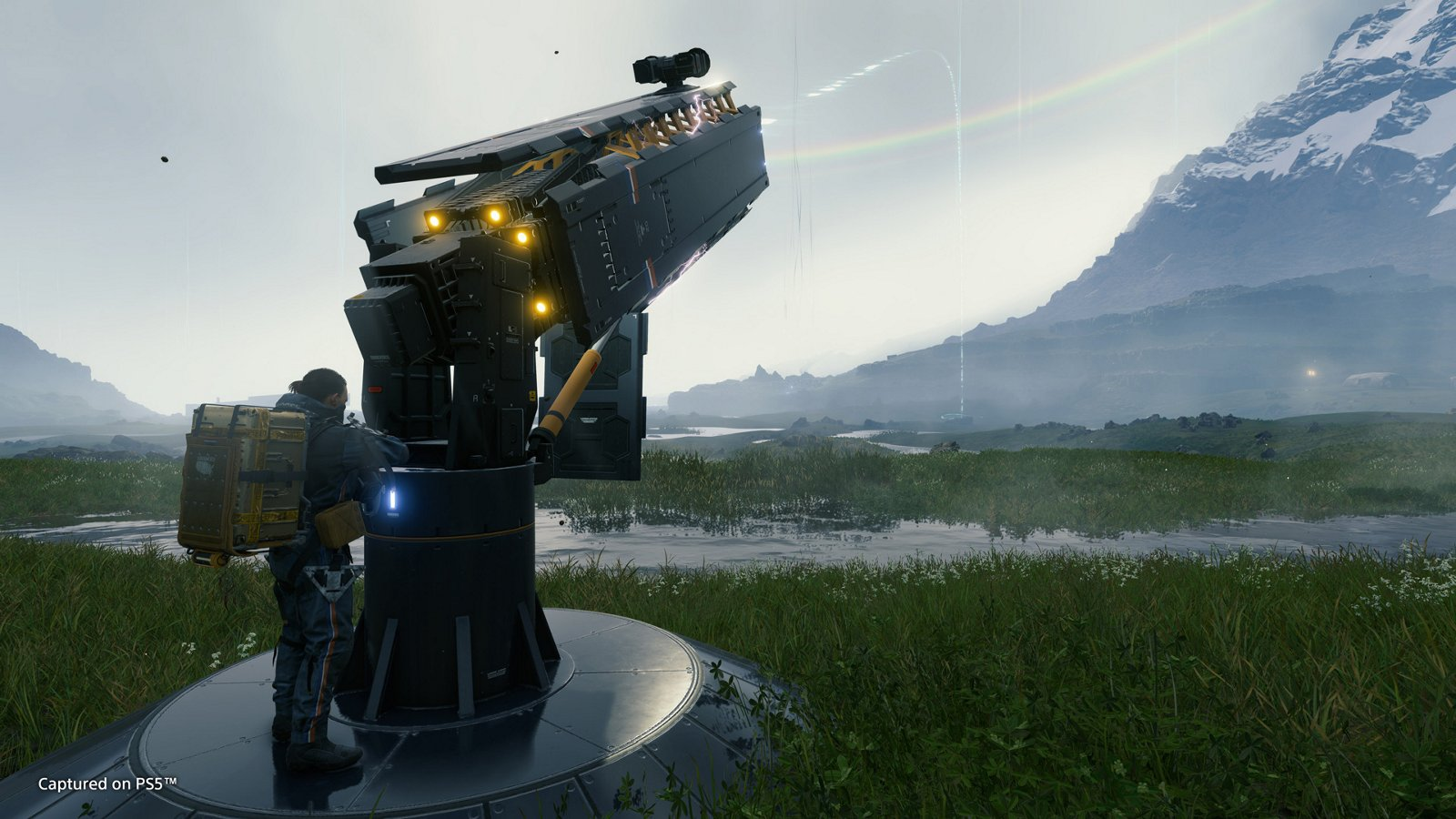 The Face of Our New Hope

Oh, and Buddy Bot is a neat way to have even more cargo delivered. Sam becomes much more difficult to control when he’s near carrying capacity. As Sam is human and can only carry so much, the Buddy Bot was created to make life easier on the road. Either by bearing the weight of full delivery or by giving you a new to get to your next delivery while you ride on your Buddy Bot. I spent a few missions trying out the delivery tool and found that while it’s neat, I prefer letting it carry my deliveries while I freely move about. Does the inclusion of this new reboot make things easier? I think it does but it’s a welcome tool and one I’m glad is around for new players but it’s tethered to the chiral network and can’t stray too far.

That’s not all Sam is getting with the Director’s Cut either. Hideo Kojima’s upgraded masterpiece eliminates a lot of the grind I found to bring the experience down. Some of my biggest complaints were attempting to navigate rough terrain with precious cargo while dealing with Mule — one of the faction’s terrorizing the inhabitants. Melee combat never really amounts to much and gunplay never really did anything I’d consider exceptional — both were serviceable at best. Kojima’s done some tinkering and added in weapon training via the Fire Range, a new area available within each base. 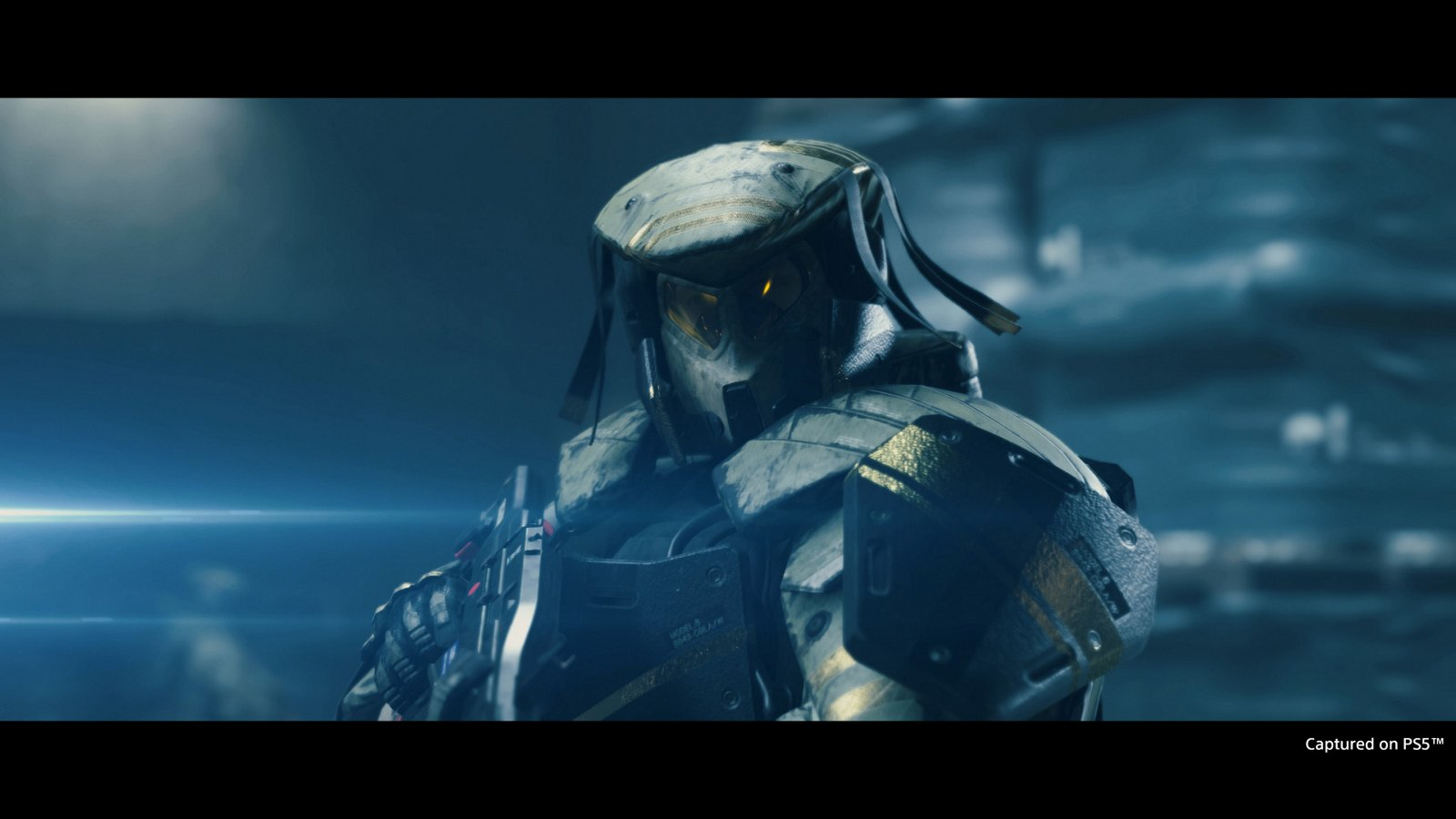 Firing weapons, be it bullets or piss, never handled well, I found it to leave me satisfied when inevitably I’d be stuck in a situation where I couldn’t be stealthy. So, by adding in this new area, Kojima allows you to run drills and practice using each weapon to get better handling of each type of firearm. I only spent an hour or so completing drills and attempting to clear ranked drills and I intend to come back to the game to rebuild the world and complete more challenges. If you’re familiar with VR missions from Metal Gear, you’ll feel right at home here because the mode feels like an evolution of the missions found in Kojima’s other major series. 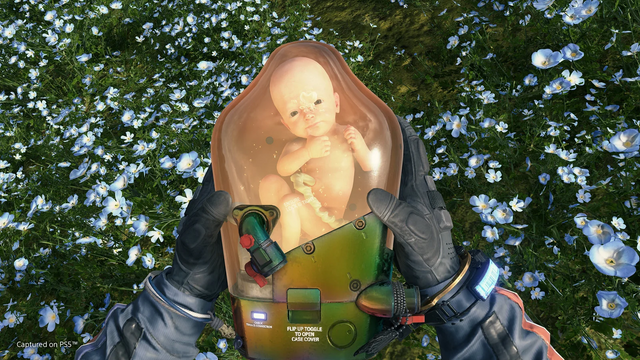 Once you progress into the third chapter,  Sam receives the Order to deliver a prototype to a distribution centre in the south and it is near this location where the newly added racetrack is, but you’ll need to make sure you have enough materials to build the terminal. Essentially, what you’re doing is completing a series of challenges set up by Lea Seydoux’s character Fragile. She’s the one who runs the delivery service Fragile Express and is a friend of Norman Reedus’ Sam Bridges. I wasn’t sure how much I’d enjoy Fragile Circuit given how most of the vehicles handle in most situations but I can say I had fun completing a handful of races before never returning to the race track.

The vehicles are not designed for these courses with the exception of the new roadster found at the race track that has the speed but not the precision to make racing it worthwhile. 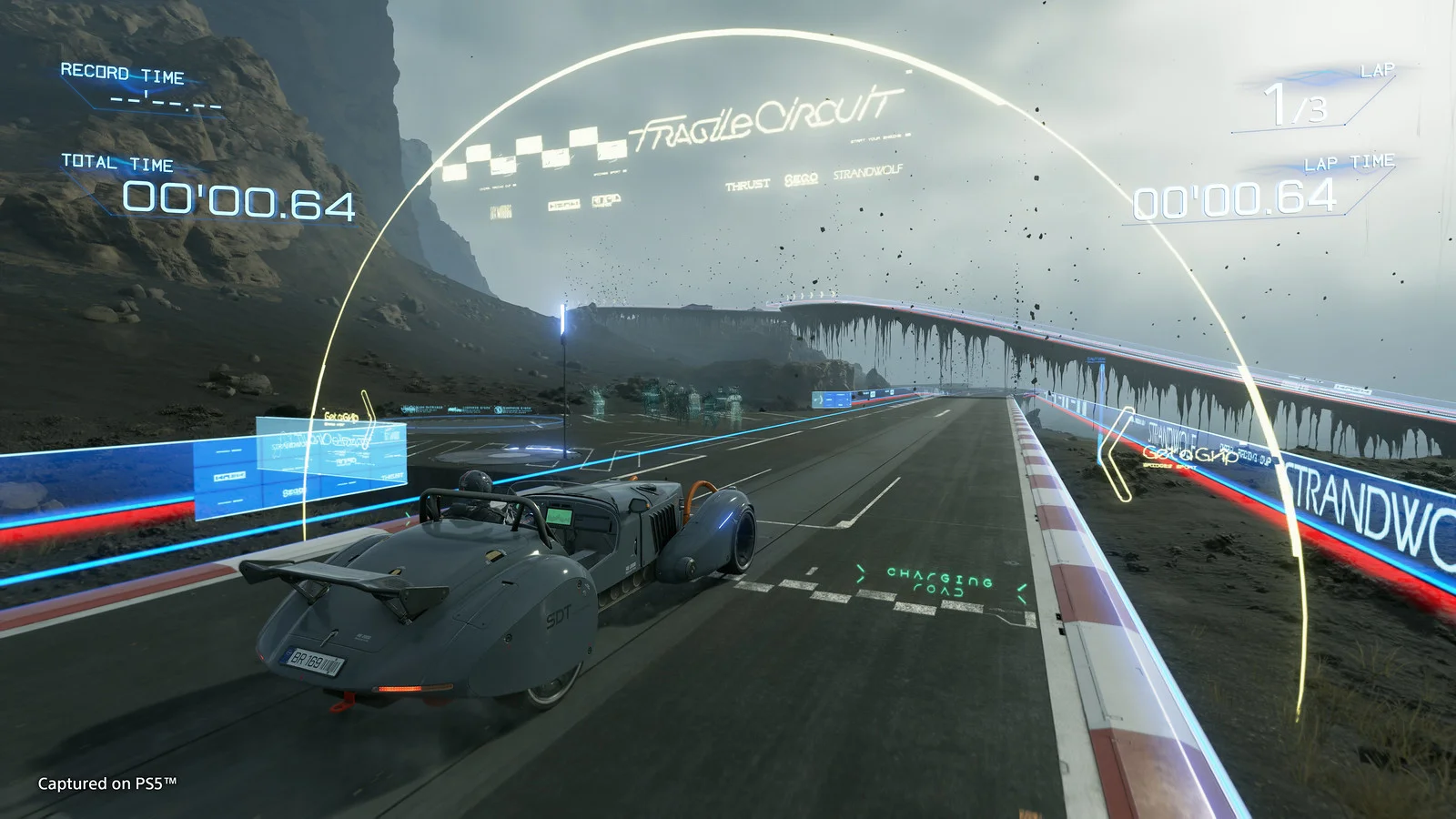 If you’ve never played Death Stranding then I can’t think of a better exclusive title — the new improvements alone eliminate a lot of the grind found in the vanilla version of the game. Returning players will find enjoyment with photo mode, the ability to customize your BB, and the new chiral brides that give access to areas inaccessible by regular methods. Oh, and the Jump Ramps make delivering a lot more satisfying, especially when the gimmick of performing tricks never lets up.

As for the PlayStation 5 enhancements, including the fast-loading thanks to the internal SSD and 3D audio — I found the load times to be the best and most welcome change. On PlayStation 4, getting from the start menu into the game took upwards of two minutes to load but that’s no longer an issue with near-instant load times giving me no time to even look at my phone while the game loads. The DualSense implementation is a nice touch, like when using weapons and how each feels distinct from the next one.

To keep this spoiler-free, there are some storyline expansions added, the entire Director’s Cut was designed to naturally weave the new content into the existing game. If you’ve played the original, you’ll be able to see where things were added but for newcomers, the developers have done a great job at weaving in the new content. Is the new story content worth a revisit? If you were invested in the world in 2019, then unabashedly yes, it’s great getting a bit more insight into the world of Death Stranding.

Death Stranding Director’s Cut improves the flow of the campaign considerably by cutting down on a lot of the grind. If you’ve never played the original, you’ll find a truly bizarre experience only made possible by the mind of Hideo Kojima. Is the game perfect? No, it’s got some lingering issues that exist outside the gameplay but the experience itself is worth your time. Returning players will be happy to dive right in by loading up an old save file and checking out all the added content, the racing track is a great distraction, the Buddy Bot is a fun new way to get around, the Catapult will save you some grief when going up against Mules, and the Firing Range is a wonderful nod to the VR missions in Metal Gear Solid.