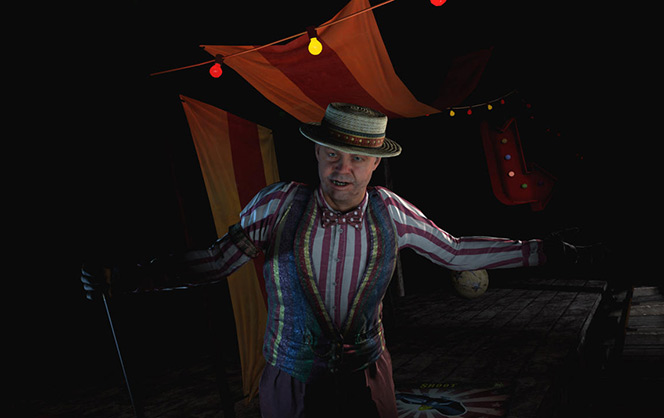 Review: Until Dawn: Rush Of Blood Hearing that Until Dawn was not only getting another game but one that uses VR sounded great when it was announced. I loved the original Until Dawn like most people. Unfortunately, Until Dawn: Rush of Blood is nothing like its predecessor, but an on-rails first-person shooter.

Until Dawn: Rush of Blood is very by the book in its mechanics. You can look around, and dual wield pistols through a carnival that houses maniacs and the killer from the original Until Dawn. It starts out creepy and transitions into jump scares.

You can shoot targets are you progress through the game and these offer nothing but score multipliers. There are some collectibles to be found which unlock trophies. This game also requires the Move wands to mimic guns. You unlock more powerful guns as you progress including and the aiming of the guns was surprisingly very consistent and accurate.

In passing, you do get little tidbits about characters from the original Until Dawn game, but nothing you didn’t know if you played the first title. Any potential story takes a backseat to this dark and twisted carnival ride you’re on.

Until Dawn: Rush of Blood has potential but stumbles with its license. You can finish the entire game in two hours and then you’re left to discover some hidden paths, score attacks, and shooting gallery. This is also a good place to start if you’re itching to experience VR as it isn’t too difficult but exciting enough to give it a shot.

Until Dawn: Rush of Blood