The Cannabis Act legalized recreational cannabis use nationwide in Canada and went into effect on October 17, 2018. For years, Canadians hid their hobby from the world and it’s been known how much Canadians love their marijuana. It’s why every year, citizens around Toronto would march to Queen’s Park and protest prohibition.

DaVinci is a name that you’ll know resonates with creativity and engineering marvels. It’s been proven how advanced the Italian Renaissance man was, crafting gadgets and ideas well beyond his time and akin to things we’re accustomed to. Leonardo Da Vinci was a man of wonder, of science, and understand – these ideas led him to create brilliant projects the likes we’re still wondering how he thought of them nearly 700 hundred years later.

I’m not being callous when I say this: the legacy of DaVinci lives on within the vaporizer. It’s an upgrade over the original DaVinci in almost every way possible and honestly, I’m hard-pressed to say it but it’s hard to go back to any other vaporizer after putting the IQ2 through the wringer over the last three weeks. The new DaVinci IQ2 has made some nice improvements which if you’re here to learn about, stay tuned, I’ll be going in-depth about these changes.

DaVinci IQ2 is a Premium Device

From the minute you receive your new vaporizer in some of the sleekest packagings I’ve seen. When you have a consumer product that opens like a wardrobe and uses magnets to contain the vaporizer, and features little drawers for all the pieces included, you know that a lot of thought went into not only the device but the box that it arrives in. As someone who’s done a lot of unboxings, usually, it’s a one and done scenario where you rush through to get to the goods inside the box; with the DaVinci IQ2, I took my time to admire the thought processes behind what a consumer will find when they purchase their device. 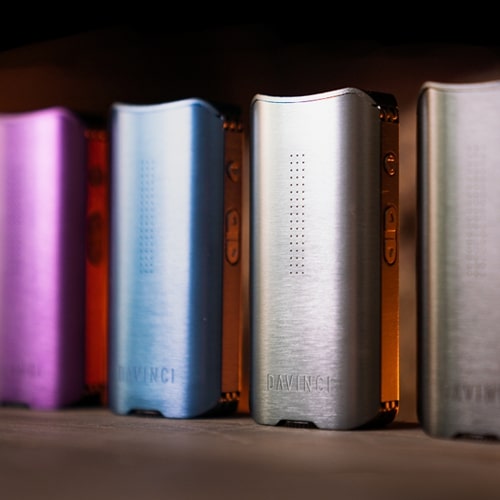 I own a PAX 2 and I’ve used the PAX 3 but nothing comes close to the sturdiness of the DaVinci series. Coming off using the original IQ and moving onto the IQ is the most natural transition thanks to the brushed anodized aluminum shell. In one of four colours, just by looking at the device you know, it’s not a product made of cheap parts, and each finish is impeccable. Holding the device, you’ll notice the heft but it’s sturdy and made of medical-grade equipment. 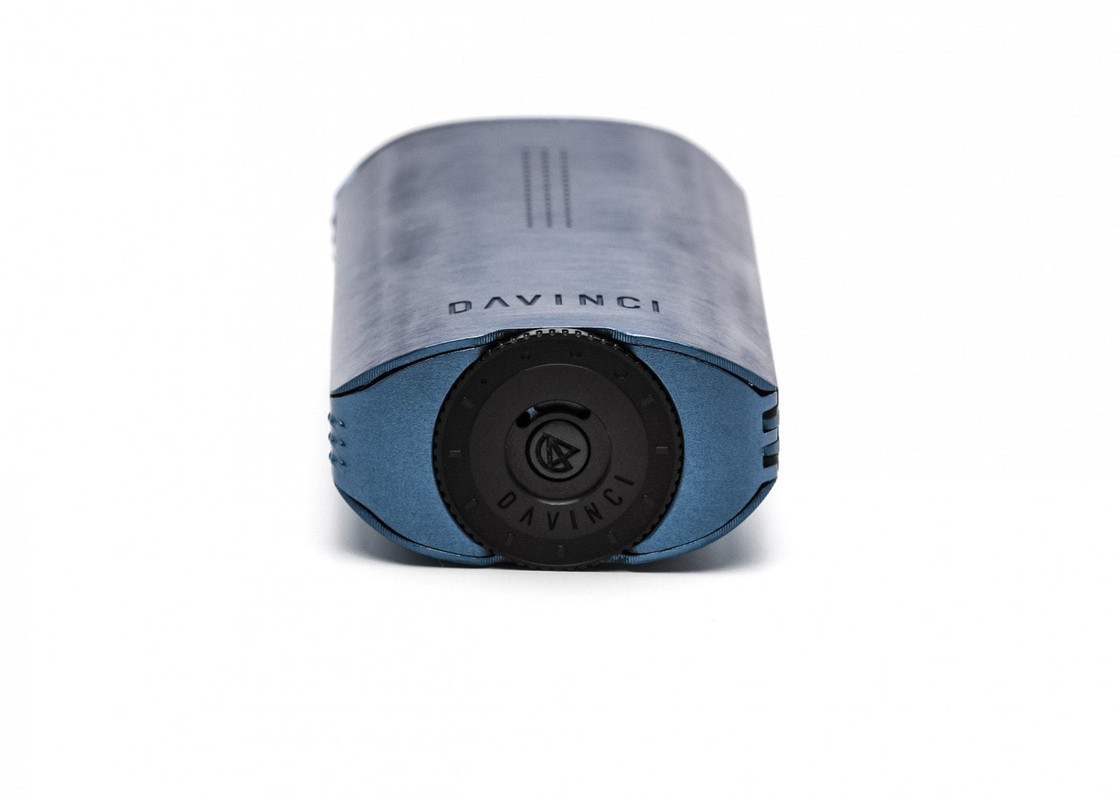 On the side of the IQ2 are three buttons. The top, when pressed five times in a row, turn the device on and off. The other two buttons set the Smart Paths, or when pressed together, the device’s battery level. If you tap the power button once while on, this shifts the device into Precision Mode and adjusts the LEDs on the front to display the temperature instead of your selected Smart Path. With haptic feedback tell you when your oven is ready, you’re left to go about what you’re doing until you hear the familiar buzz of the IQ2.

Furthermore, the IQ2’s light grid display provides a ton of feedback in a minimalistic way. Everything you need to know about your vaporizer is told through the 51 dimmable LED lights that show on the front of the device. From the length of a draw, your dosages, the temperature, your Smart Paths, the battery level; those lights are the control center of the device while looking absolutely elegant. Better yet, if the LED is too much for you, the IQ2 has a Stealth Mode that can be activated by pressing the power button together with the down arrow once to dim the LEDs.

One of my favourite additions and selling-features that outperform many of the other brands is the new Air Dial technology found on the bottom of the IQ2. I’ve grown accustomed to using the Air Dial every other session. Using the IQ2’s airflow dial, you adjust your device for easier draws and enjoy vapor that is 50 percent cooler than other vaporizers. Also, you reduce your draw resistance and experience bigger, denser vapor. I like a light pull that doesn’t offer too much resistance, having the option to switch between pulls is a big deal for me. 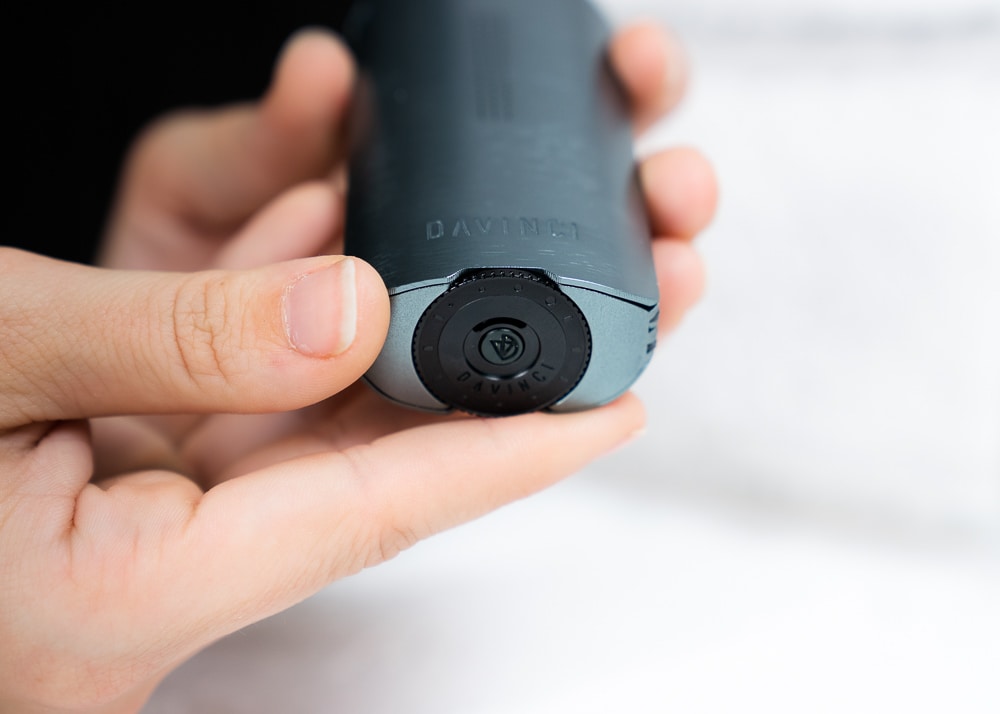 Another thing that I’ve learned about the DaVinci IQ2 is the new Dosage Control Calculator. I’m working my way through how it exactly works but from what I’ve done so far and from the knowledge base found on DaVinci’s website and excellent Twitter feeds, you can simply input your strain potency as well as the amount and the IQ2 smartly tracks the dose and reports the dose per draw and per session.

As for battery life, the IQ2 lasts several sessions before needing a recharge from the included USB cable. What might be a nuisance to some is the charge time: roughly 6 hours for a full charge. However, DaVinci sells replaceable batteries so having a spare isn’t necessarily a bad idea. With that in mind, the PAX 3 lasts around the same amount of sessions, but, charges in half the time and uses a built-in Li-On battery. The trade-off is the preference here but the DaVinci offers choice if your battery dies while you’re out or using it, simply open up the device and swap it out for another Type 18650 rechargeable battery. 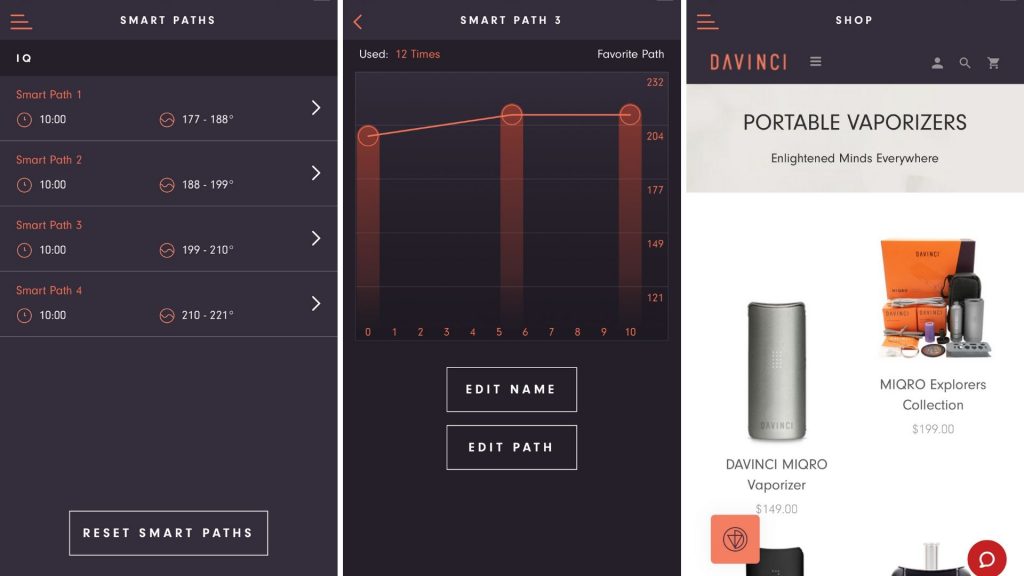 From my testing, if you stick to lower temperatures, the battery life will last longer. Going a step further, the IQ2 includes a timer that turns the device off after a set time, saving your battery from unnecessary usage and timing your sessions so you don’t waste your herb by letting it sit.

I had a family member test out the DaVinci IQ2 with me and their first question about the device, “did I take any vapour?” That’s the beauty of the Air Flow Dial, I set the pull to be a light and pleasant intake; a new user shouldn’t take more than they can handle the first time they use a new device. The realization that not only did the take the vapour but the clean taste that floods your senses is still to this day, one of the best things the IQ2 offers. 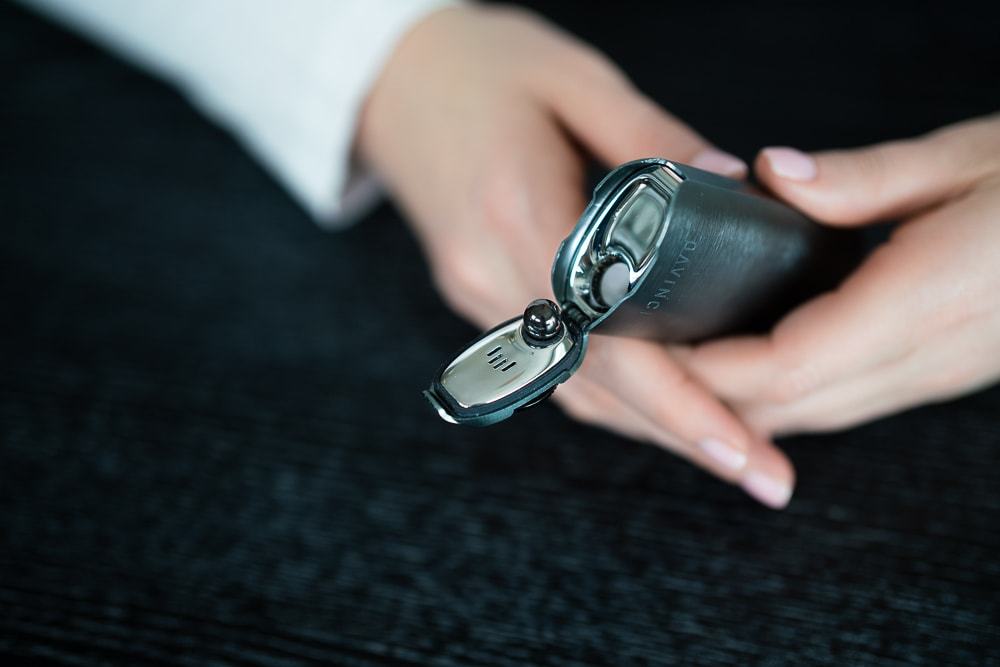 The DaVinci IQ2 vaporizer isn’t cheap and as an adult, I’ve learned very few things are cheap and worth their price. If you want quality and consistency, spending a bit more upfront is the best option. The DaVinci IQ2 uses medical-grade equipment that never touches your bud, leaving you with only the best tasting and smoothest vapor around. And the fact it’s now a dual-use vaporizer means you can use both dry herbs and extracts without the stress of causing damage.

Lastly, while you can use the DaVinci app to plan your Smart Paths and some other neat features; you’ll never need to because the device is packed full of features and everything necessary is already available on the device. If you prefer having more information, then you should consider the DaVinci Vaporizer YouTube channel – it’s got tons of great guides and helpful tools to make your experience as pleasant as you want it to be.