Curved Space is a labour of love for the four-person team at Only By Midnight. Their collective goal is to provide a crisp and colourful asteroids shooter that unfolds on a curved plane of existence rounded out with a story that adds some thought to the mass murder of some pretty unique character models.

To their credit, Curved Space checks the boxes of being a wholesale asteroids experience for those looking for such.

Worlds will be warped

I don’t ask for much in terms of a story when it comes to arcade asteroids shooters like this, so the simple opening title card proclaiming “We used to harvest energy, but that attracted the spiders. Now we harvest the spiders.” was more or less a welcome surprise — and one of the best one-liners I’ve seen in a while. It instantly whipped me up into a mood to kill neon space snakes reminiscent of this famously lovable scene of pure violence. However, as you progress a meta and self-aware story unfolds where you meet two other versions of yourself who will attempt to get you to change the status of the universe. I will say no more on this as we would be here for hours as I discussed how the choices the game offers you forced me to use my brain and my personality in an experience that this otherwise mindless killing. 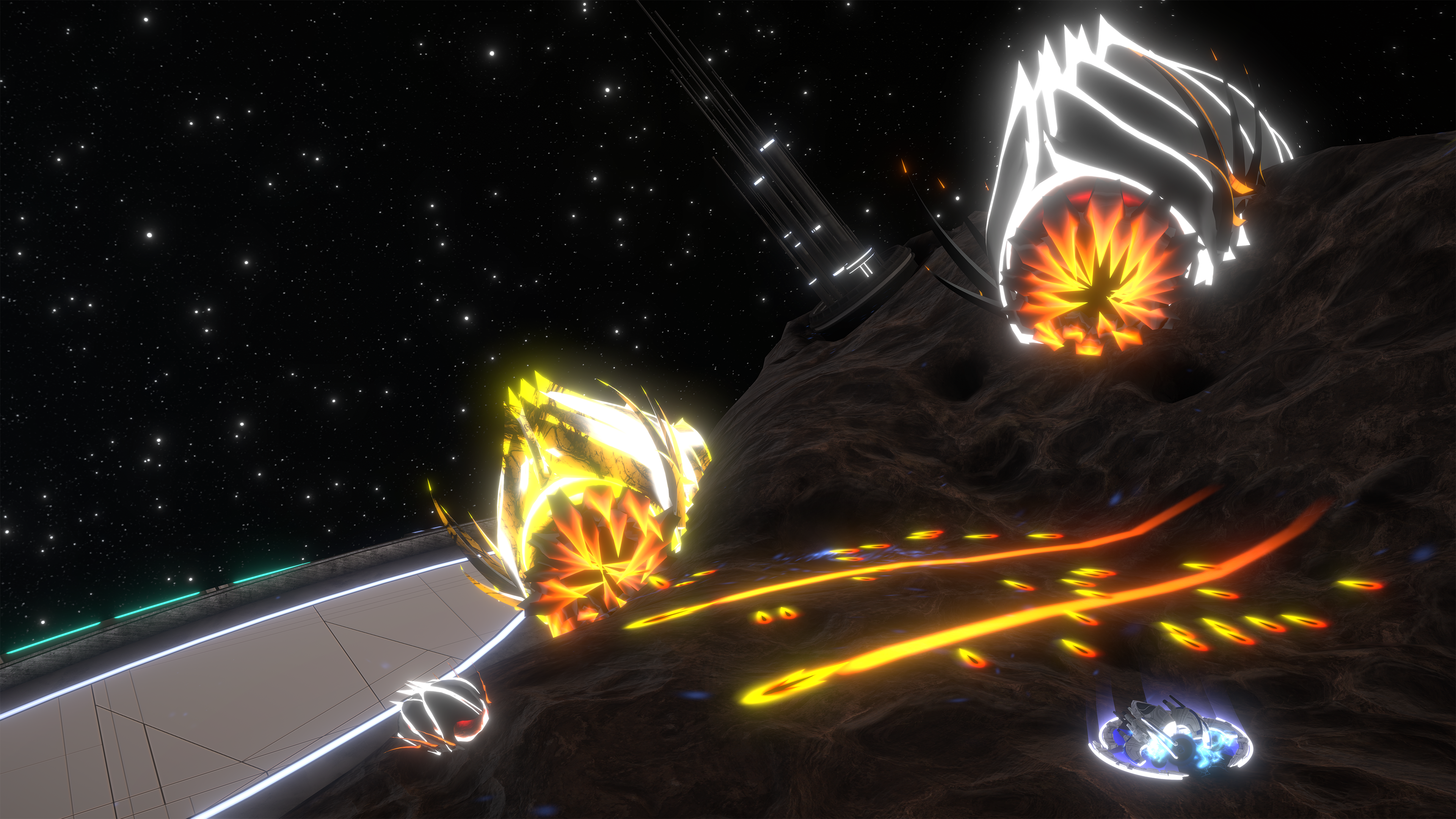 Curved Space gives you a ship that traverses the plains of a wide selection of obtusely-shaped space surfaces like asteroids, a giant rail gun and a space station that looks… well, it kind of looks like the male reproductive organ. [noice!] It also gives you a wide variety of weapons that fall into the categories of:

There’s also a form of push and pull mechanic known as “leashing’ where you can tie a few spiders up to environmental hazards to do damage, charge up skills and on certain occasions, progress the story. The most recent of which is likely the only time you will use this skill. Finally, there’s a dash ability that can be chained with the leashing to kill enemies with motion in a form of a melee attack, but it also acts as a form of parry where well-timed rushes will deflect spider bullets. 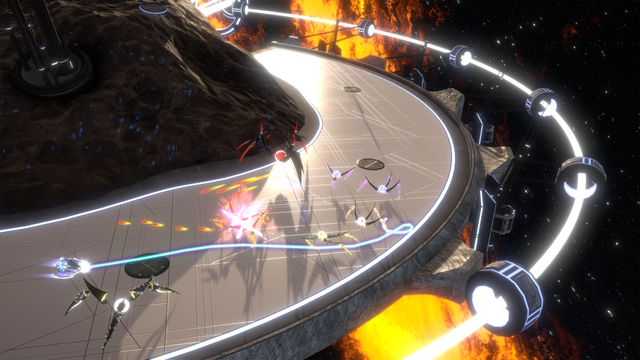 All and all, I really have no complaints with the weapons systems. They feel tight and are the perfect amount of mindless that after an hour of playing the campaign, I totally found myself at home in the mindless RGB-infused killing fields. There’s also an extremely meaty levelling and buff system that had me feeling as if my ship were best described by this classic anime moment — you know, only in this case, I think of myself as piercing through the heavens with my laser whip instead of my drill!

Curved Space is a welcoming space for you

Curved Space functions exceptionally well as an arcade game that allows you to make it your own space for unwinding and being entertained. Aside from a campaign that comes packaged with a global leader board, there’s a daily survival challenge mode where you get one life to score points and prove you can make it to the top of the global leader board. There’s also an arena mode that will throw challenges at you, similar to the way they appear in the campaign. Finally, there’s survival mode and endless mode. The earlier drops you on a map and asks you to survive [shocking, I know!] While the latter functions as a sort of campaign that isn’t part of the campaign. 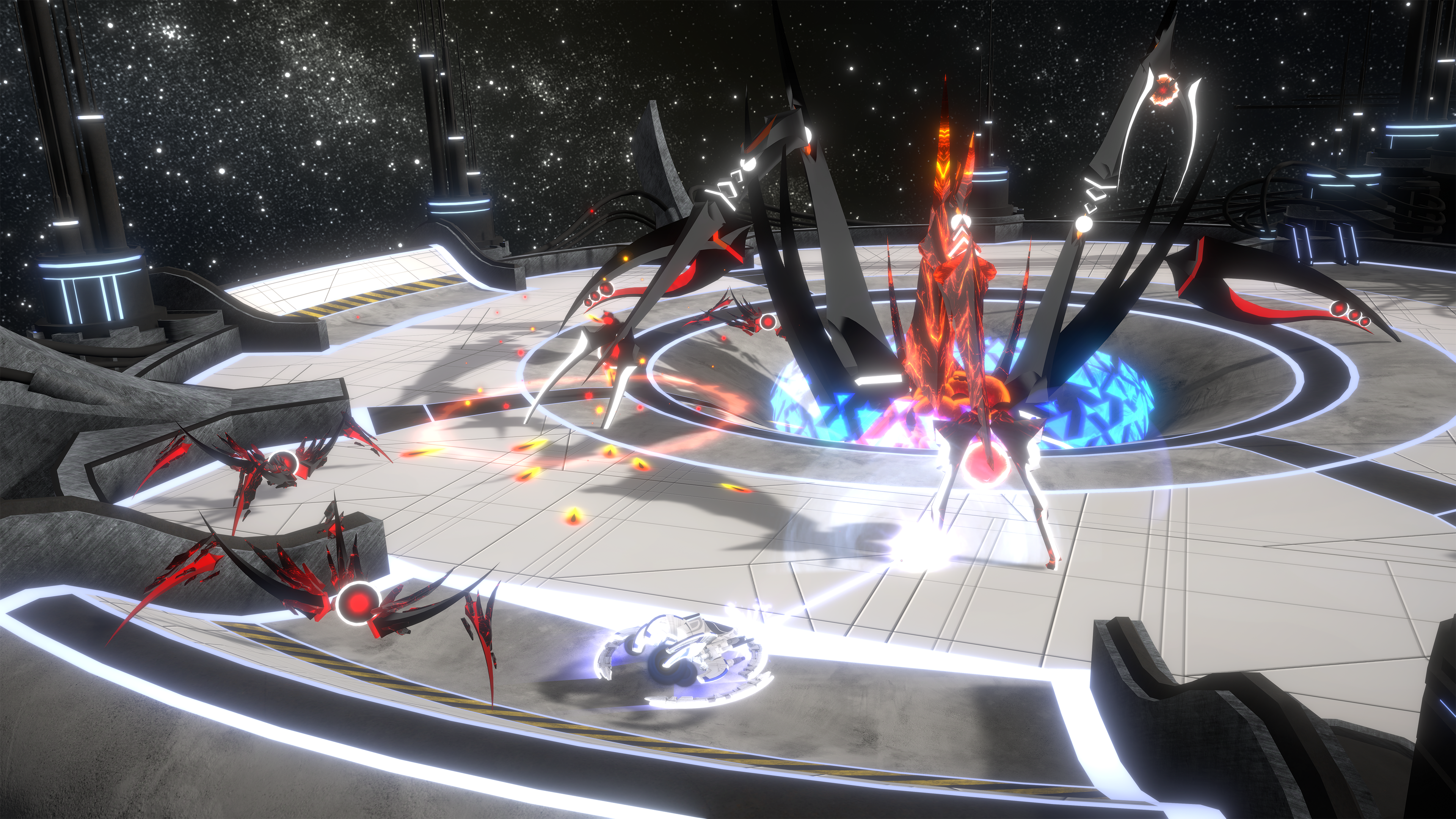 There’s also an incredible amount of customization around controls and difficulty levels that truly adapts to the times you’re looking for mindless killing and a little more of a challenge.

Things can feel like they just keep going around and around

Curved Space isn’t without its faults, though, so here’s just a couple that I have.

For a game where the core mechanic is baked right into the name, there’s very little need to actually use the ability to curve your ship with the game surface. You’ll often find that killing spiders doesn’t require all that much motion unless you get tasked with hunting down a specific kind of spider that’s annoyingly totally on the inverse plane of the map then you are. I think that it would help if there was an adequate mini-map and indicators of where enemies are on the spatial plane. There’s a form of objective marker that points you in the right direction of your target, but it is a long way from precise. 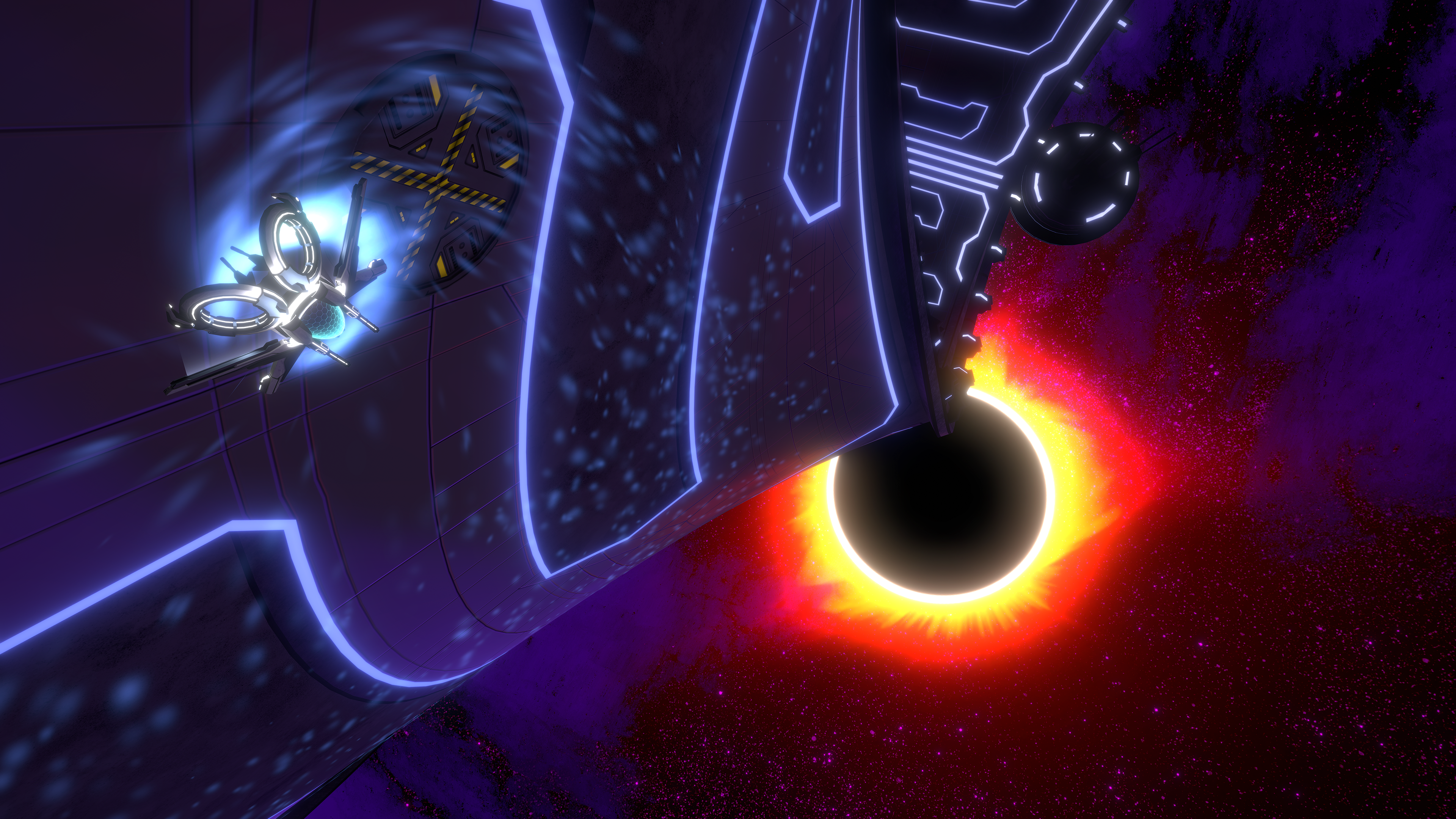 Speaking of hunting, that becomes the brunt of what you are doing and it gets quite repetitive. Now, I’m directing this grievance towards the campaign because I totally understand having a repetitive arcade loop for the game’s survival and endless wave modes. But the campaign maps adopt a loop that just keeps going around and around where you kill a wave of spiders, survives an onslaught, hunt down several specific spiders without killing any others, charge something up by leashing some spiders and then fight a boss. It’s repetitive, but you should also be in a mindless arcade asteroids trance, so it is hit and miss as to whether you’ll hate it or not. I began to lose my patience with it as time went on. 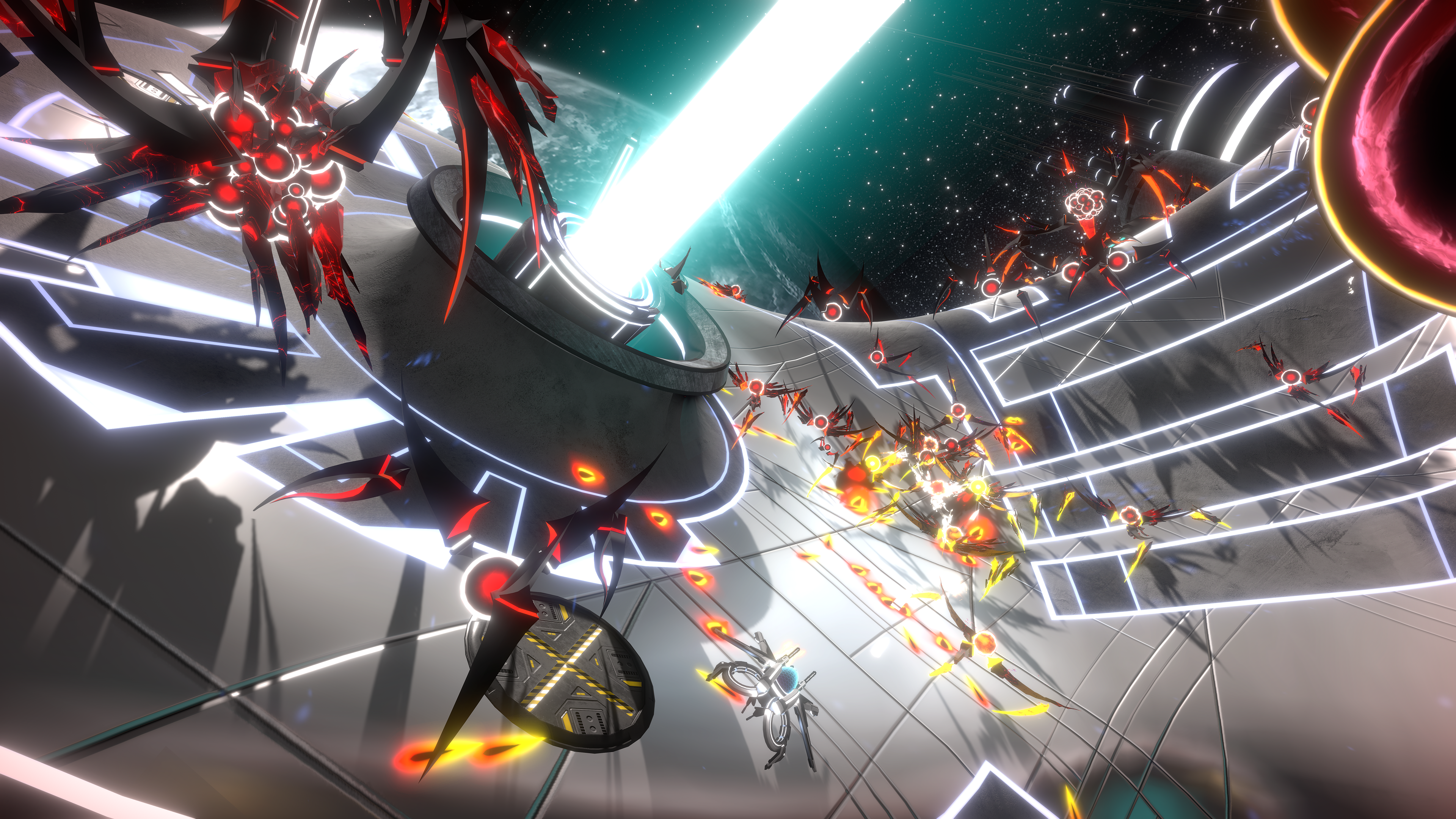 Whit is there left for me to say, aside from saying that Curved Space is quite an enjoyable arcade asteroids game. I wasn’t really expecting it to be much aside from a neon stress-reliever, and that’s exactly what it is. While it gets repetitive, the campaign also does an amazing job of injecting some thought into a mindless kill-fest, so that’s a win. My only wish is that navigating the curved spaces for which the game is named was a little more fleshed out.