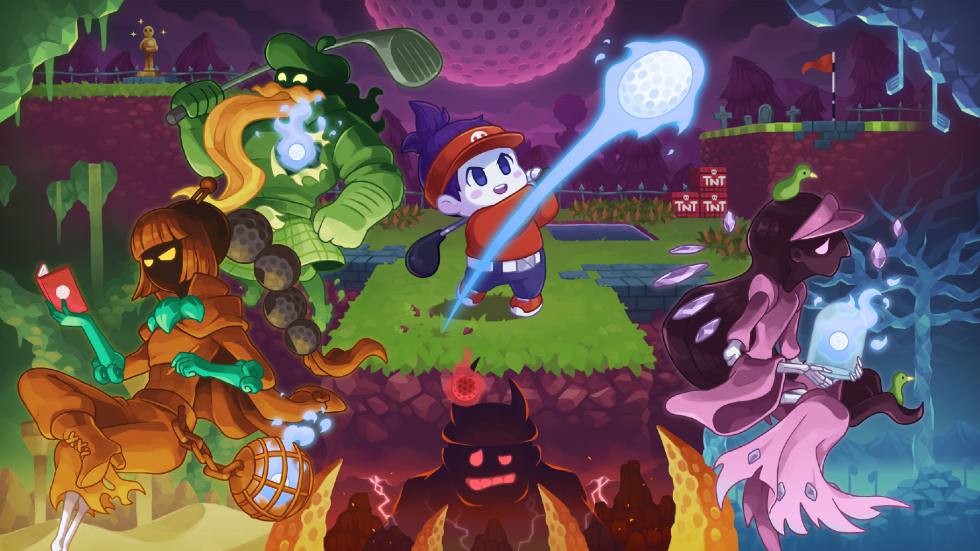 Golf can be a frustrating game. Bunkers, ponds, narrow fairways; they’re all just out to get you! Now imagine adding spikes, cliffs, curses, and the fact that you’re playing in order to simply SURVIVE!?

That’s where Cursed to Golf picks up its clubs and hits the links running. But this is far from a frustrating game. Instead of creating a ton of obstacles and wacky scenarios that want to make you toss your irons in the lake, the game gives you a wide variety of fun and challenge that is all wrapped with a rogue-like bow that will provide hours of replayability and enjoyment.

Cursed to Golf begins with a golfer getting ready to win a championship trophy, setting up on the 18th hole. The weather turns, lightning strikes, and they’re sent underground to Golf Purgatory. This is where the game kicks off and takes you through a solid tutorial, allowing you to get a feel for the controls and why being Cursed to Golf is so different than hitting the links in the real world. 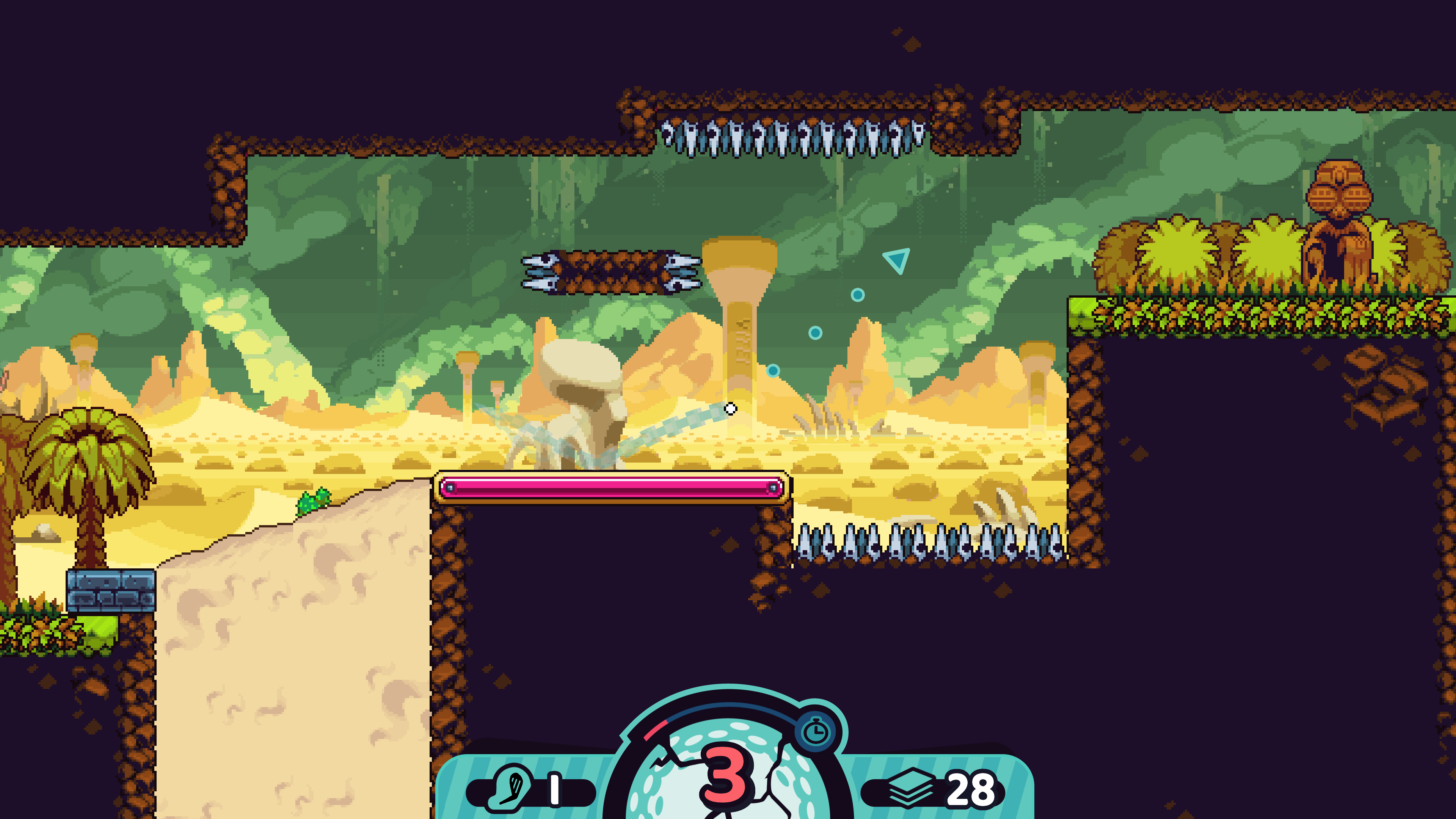 That’s the bulk of the story here. Playing as the “Wee One”, you need to complete the 18-hole course to essentially rise from the dead. But it’s not that simple; the courses and even boss stages stand in your way and as the player, you quickly come to realize this is no ordinary golf game. The Groundskeeper is overseeing all of it, changing the holes each and every time you tee up.

First and foremost, it’s not about shooting the best score in Cursed to Golf. The game does keep track of how many shots you’re taking on the course, but instead of needing to hit birdies and pars, you’ll be fighting against a shot clock that only allows five shots per hole. You start there, but you can hit Idols that add to that number. It almost acts like a life bar that is extended and resets on each hole. 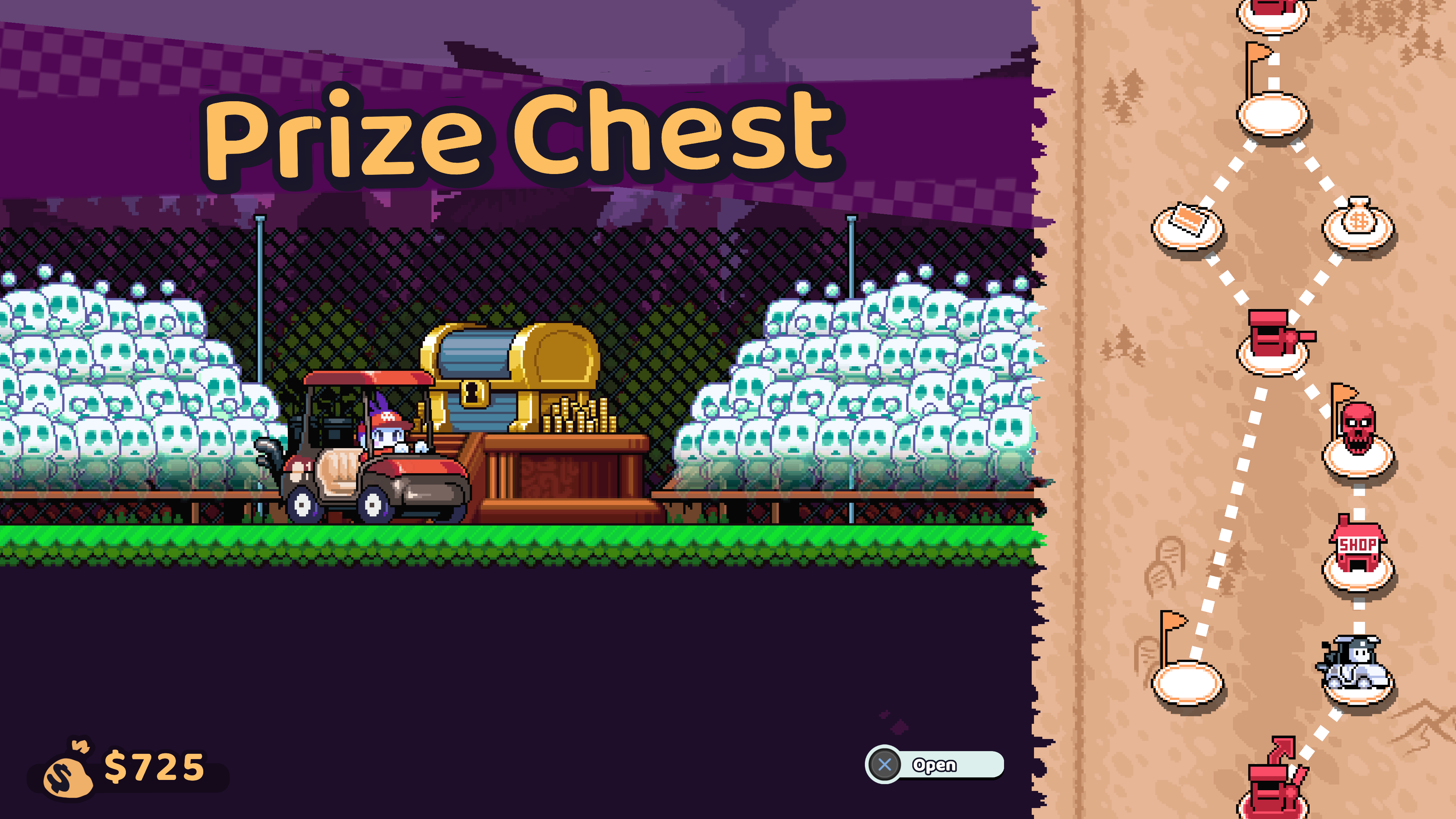 It doesn’t end there though. There’s also a system called Ace Cards that gives you a slew of fun and crazy abilities to help you “survive” each hole. Some will add to your shot total (+1, +3, etc.), there’s one that gives you a mulligan, others will let you blow up TNT that are blocking your way, or why not use the U-Turn card that lets you change direction mid-air? There are 20 at your disposal and it’s fun to experiment either during a round or on the practice course. 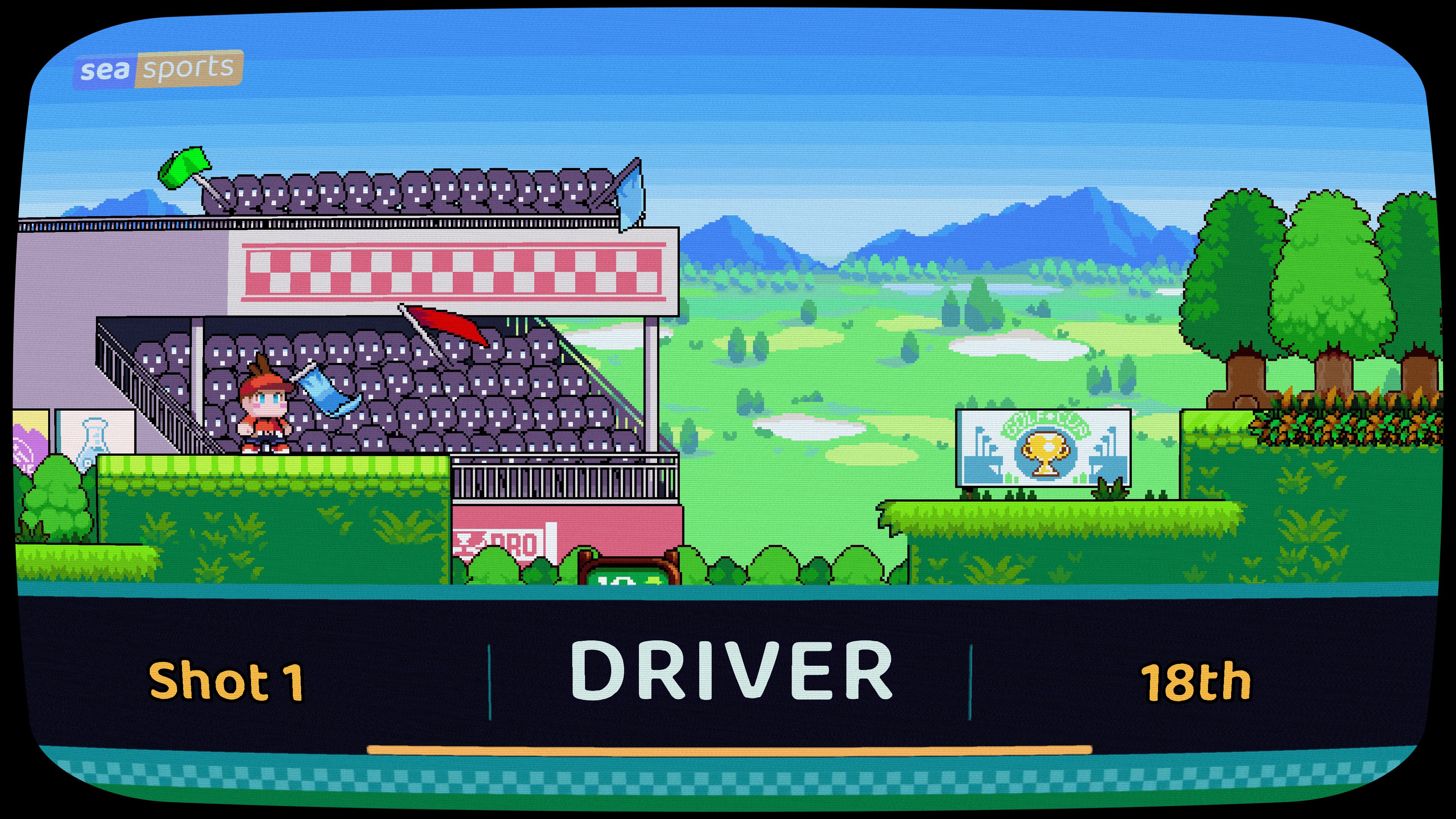 As I mentioned off the top, the whole game is working within the rogue-like genre. When you fail to survive, you’re sucked back to Hole 1 and the journey up to the surface starts all over again. Each hole will be one of the dozens that will provide a varied level of challenge. Each one is unique and will be presented in a different order than your last run. This not only provides variety, but it gets it got its hooks into me. I immediately felt like teeing up; it’s that same feeling you might recognize from the best rogue-likes out there.

Along the way Cursed to Golf will have you pitted one-on-one matches against “bosses,” collect more cards, and earn money to expand your collection. You’ll even play on a number of different courses that have the “Wee One” swinging past spikes, massive bunkers, lakes, bounce pads, graveyards, and more. There is a lot more than meets the eye in this game; it surprised me just how complex it got. 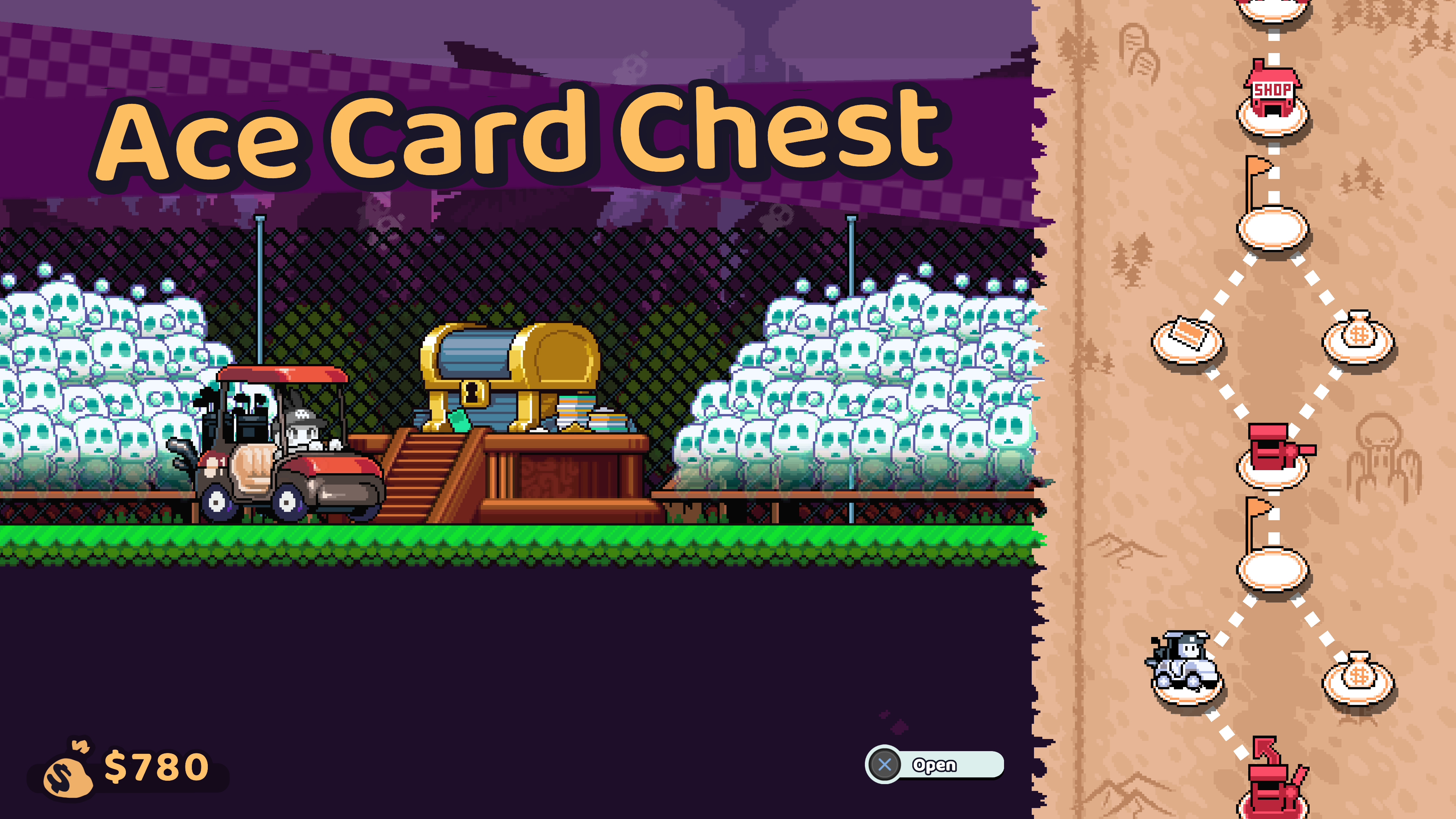 Despite all the ways that Cursed to Golf is trying to stop you from succeeding and ascending back to the real world, it never feels cheap or unfair. If my shot took a bad bounce, it was on me, which is how rogue-likes should be.

While the game does ramp up the difficulty pretty quickly, Cursed to Golf has a lot of charm. It was a primary reason why even when I failed a hole, I was ok starting back up again. You can see by the tweet below, that the developers were eager to put their own spin (get it?) on a crowded genre not only through fun gameplay but with its own joyful and witty personality. 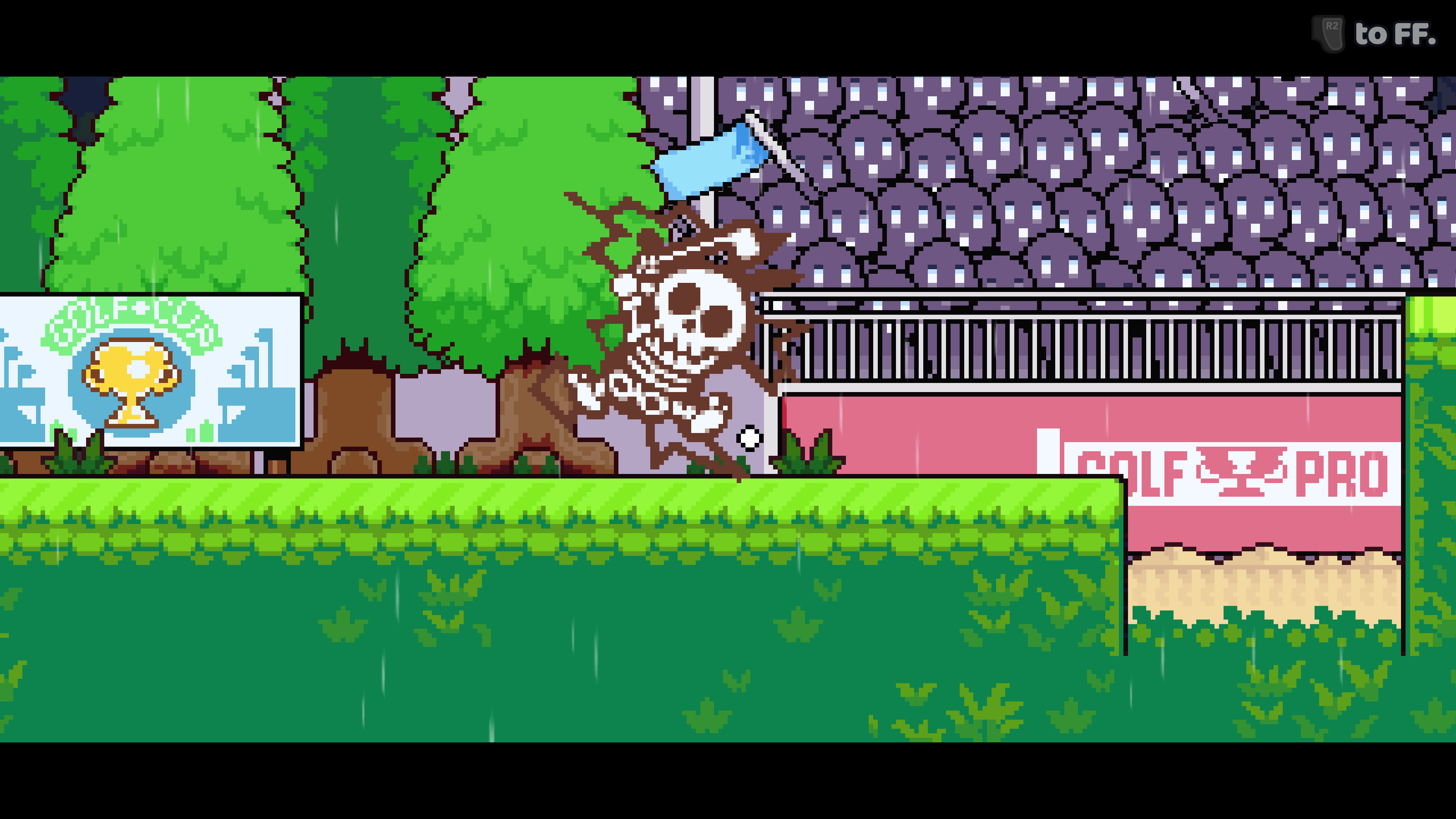 Cursed to Golf looks and sounds like a ton of fun. It has a great pixel art style that’s filled with interesting landscapes and fun and unique characters. While the music can get repetitive after visiting the same holes and courses each time, it never graded on me while playing. It provided just the right level of fun while dealing with challenging scenarios each time I swung the club.

The cute-looking and sounding package is a lot tougher than you might think, so be prepared. But if rogue-likes (or as the devs call it… Golf Like) interest you, give this one a swing. Cursed to Golf is trying to do something new in a genre that can feel overwhelming at times, and it succeeds.

Recommended
Fun, wacky gameplay
Great variety in courses and items
Funny and charming with a great visual style
Difficulty ramps up a little too quickly