In the mid-2000s Square Enix was full-on hammy and many of the games franchises we know and love had some full-on overexaggerated moments between the lot of them. The one that always stood out to me was Crisis Core: Final Fantasy VII, a title that launched on the PSP in 2007. This was not long after Final Fantasy VII: Advent Children and well into the 10th-anniversary celebration Square Enix held for its most popular entry in the long-running series.

And then one of the critical pieces of Final Fantasy VII faded into obscurity as Crisis Core only resided on the PlayStation Portable, a dead platform. Those who wanted to experience the tale of Zack Fair and the events that transpired before Cloud and Avalanche blew up the Mako Reactor in Midgard would need to find alternative methods. Some pulled out their aging hardware and played it on the small screens, others would emulate it on their PC.

Square Enix has been on a wicked hot streak the last few years and it is hard not to notice it. Sure, the Japanese developer may see both ups and downs during this period but for the most part, it feels like we’re getting a steady release schedule filled with incredible experiences. Crisis Core: Final Fantasy VII Reunion is an example of Square listening and given how positive the reception to Final Fantasy VII Remake was, I wasn’t too surprised to see Crisis Core make the cut into the modern retelling we’re in the midst of.

Serving as neither a full-on remake, Crisis Core: Final Fantasy VII Reunion isn’t a simple remaster either. Instead, the lost chapter falls somewhere right in the middle and rightfully so. Sure, the upgraded visuals, voice acting, and quality of life changes fall in line with Remake but the script and story remain unchanged, serving as a bigger budget remaster.

Embrace your dreams and protect your honour

Crisis Core stars Zack Fair, a 2nd Class Soldier, new to the Shrina Electric Power Company’s elite fighting force. The thing about Zack is that is a lovable oaf and easily one of the best characters in the entire extended universe. He’s also a tragic character who leaves us far too soon and the loss of such an important character becomes far more realized to those who experience the events leading up to Final Fantasy VII. 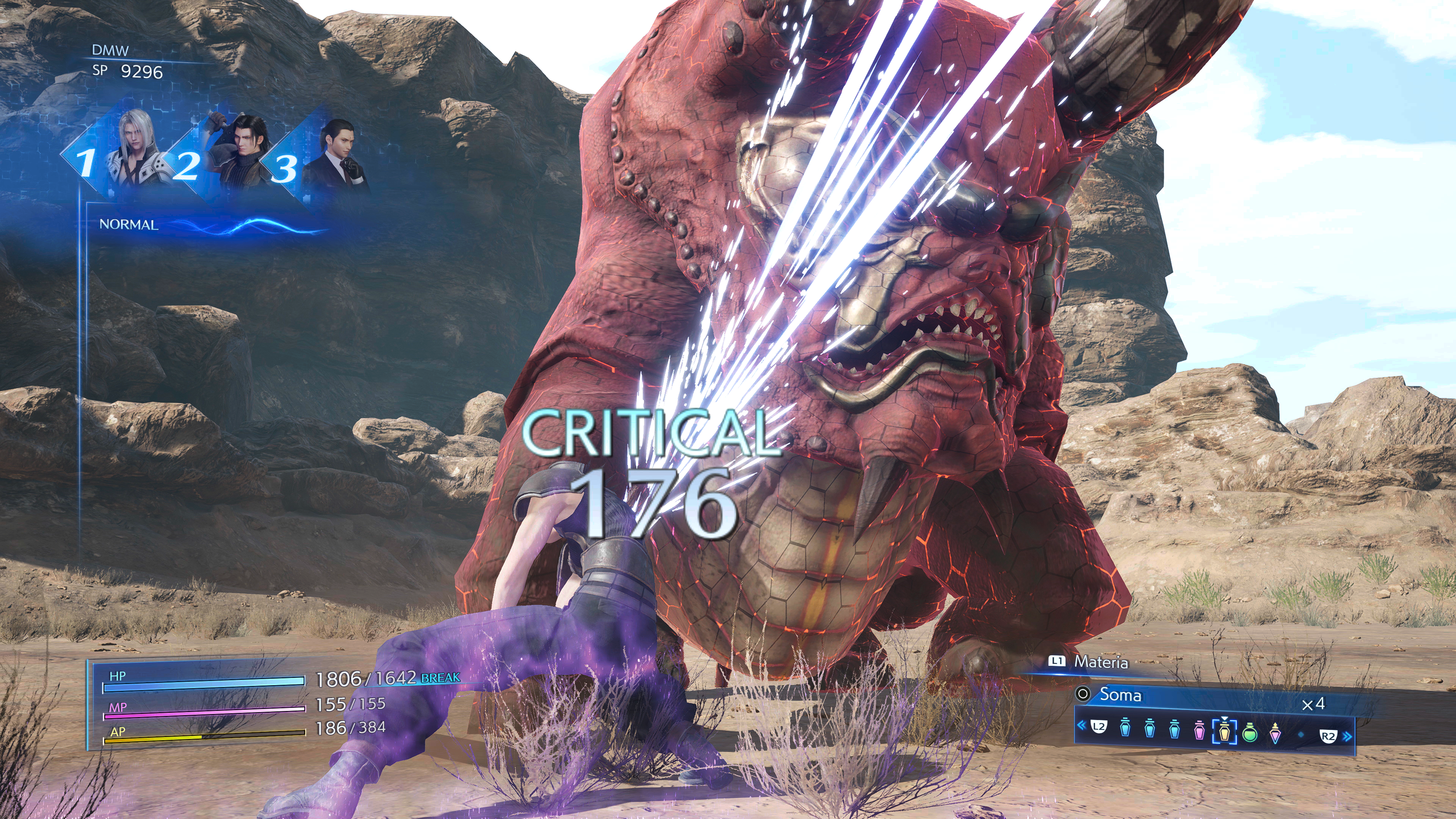 Alongside this, something that Crisis Core does wonderfully, both the original and the remaster, is to offer a fresh look at characters that we already know, or that others will come to know. Sephiroth is the perfect example of this. Instead of showing us the imposing and cruel antagonist, we’re used to, here we’re introduced to someone who has serious problems when it comes to dealing with the only people he can call friends. It’s a nice contrast to the villain we know, and it makes his story tragic Tyler Hoechlin’s performance is superb. 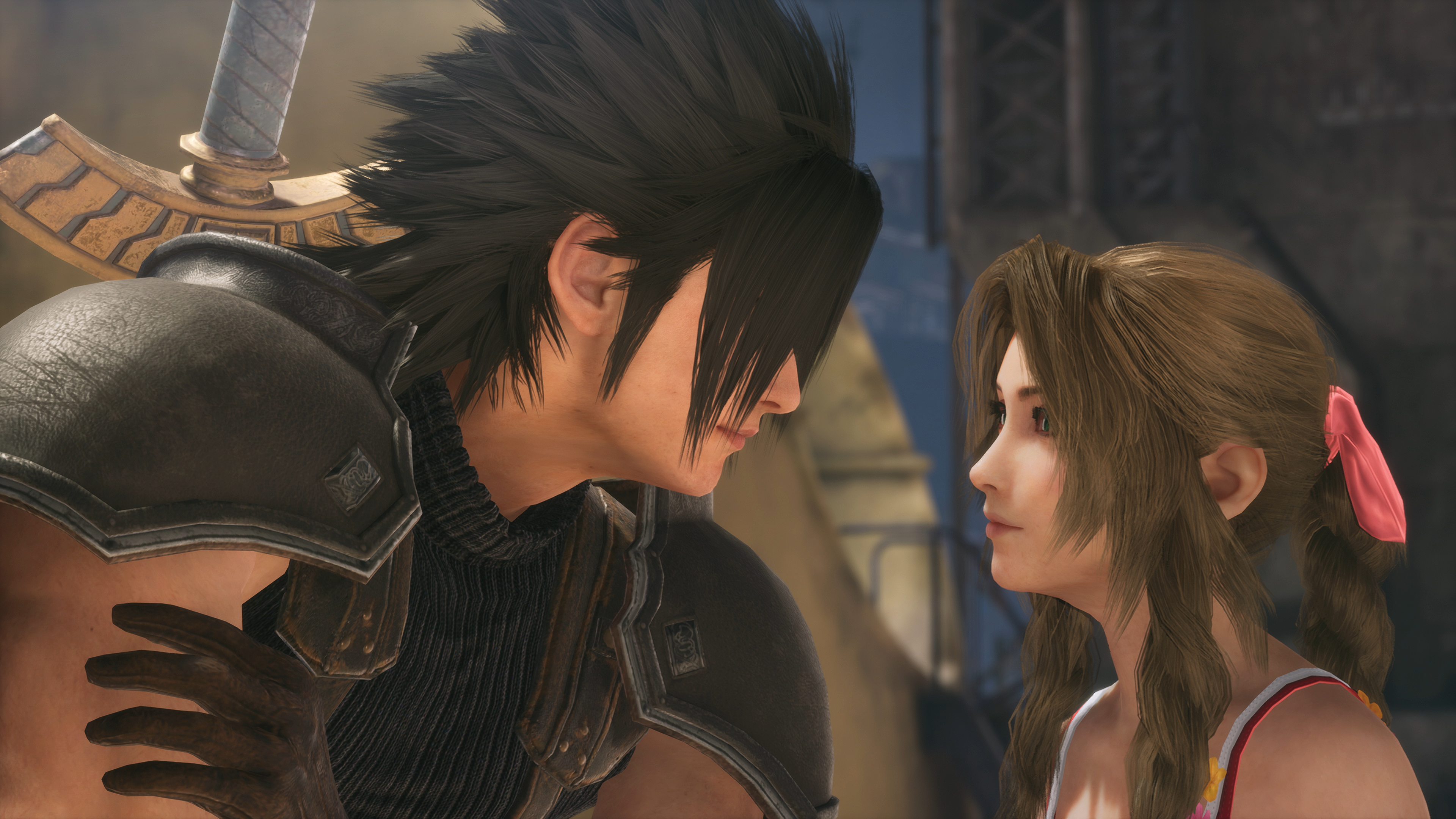 Similarly, it’s great to see some of the characters who will eventually play a major role in Final Fantasy VII. Yuffie, for example, is just a child, but she has motivations made clear by her hatred for Shinra after the war against Wutai. Aerith plays a large role in Zack’s life. Unlike his bond with Cloud, we see the relationship blossom and where it inevitably leads. The two are clearly head over heels for each other and soon enter a long-distance relationship, but the pairing creates a conflict of interest between Shinra and the Turks.

The entire plot of Crisis Core begins on a light note before quickly introducing heavy hitters like Angeal — Zack’s mentor and original owner of the Buster Sword; Genesis — a 1st Class Soldier who vanishes with a small army, and several members of The Turks. 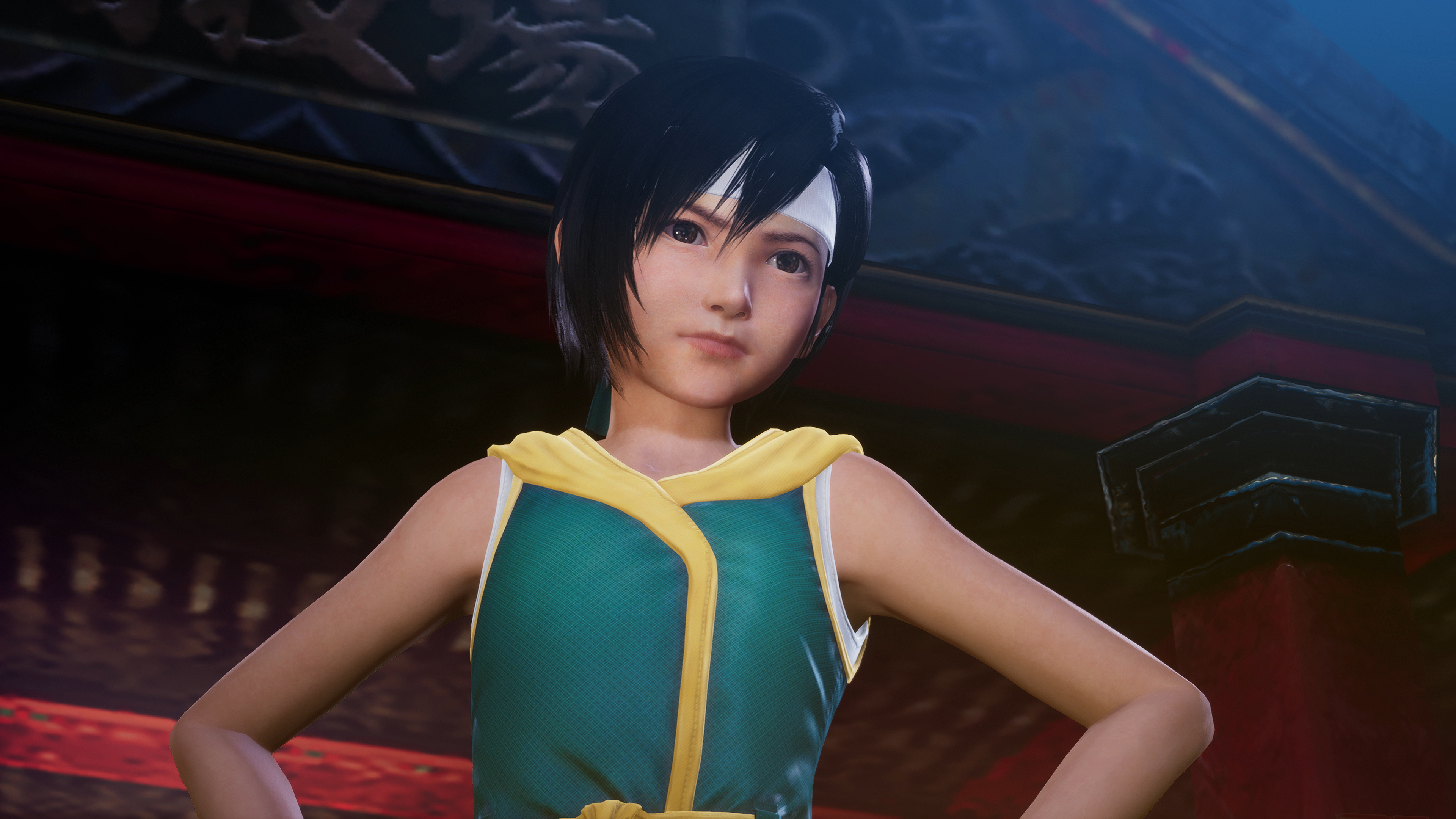 A lot of the things we’re introduced to in Final Fantasy VII are shown in more detail here including Sephiroth’s heel turn, the razing of Nibelheim, what happened when Soldier came to Mount Nibel and secrets that the lab hid. These plot threads hold up surprisingly well and it makes sense Square Enix would want to include them in its current Remake project. Crisis Core is more than just a retelling of events that transpired years ago, instead, it is a complete tale filled with emotionally impactful performances from almost every character.

Those who have already played Crisis Core: Final Fantasy VII won’t find anything substantial when revisiting Reunion. Sure, the 60 FPS, the newly implemented camera expands the experience but at its core, it is still a game meant for a handheld. 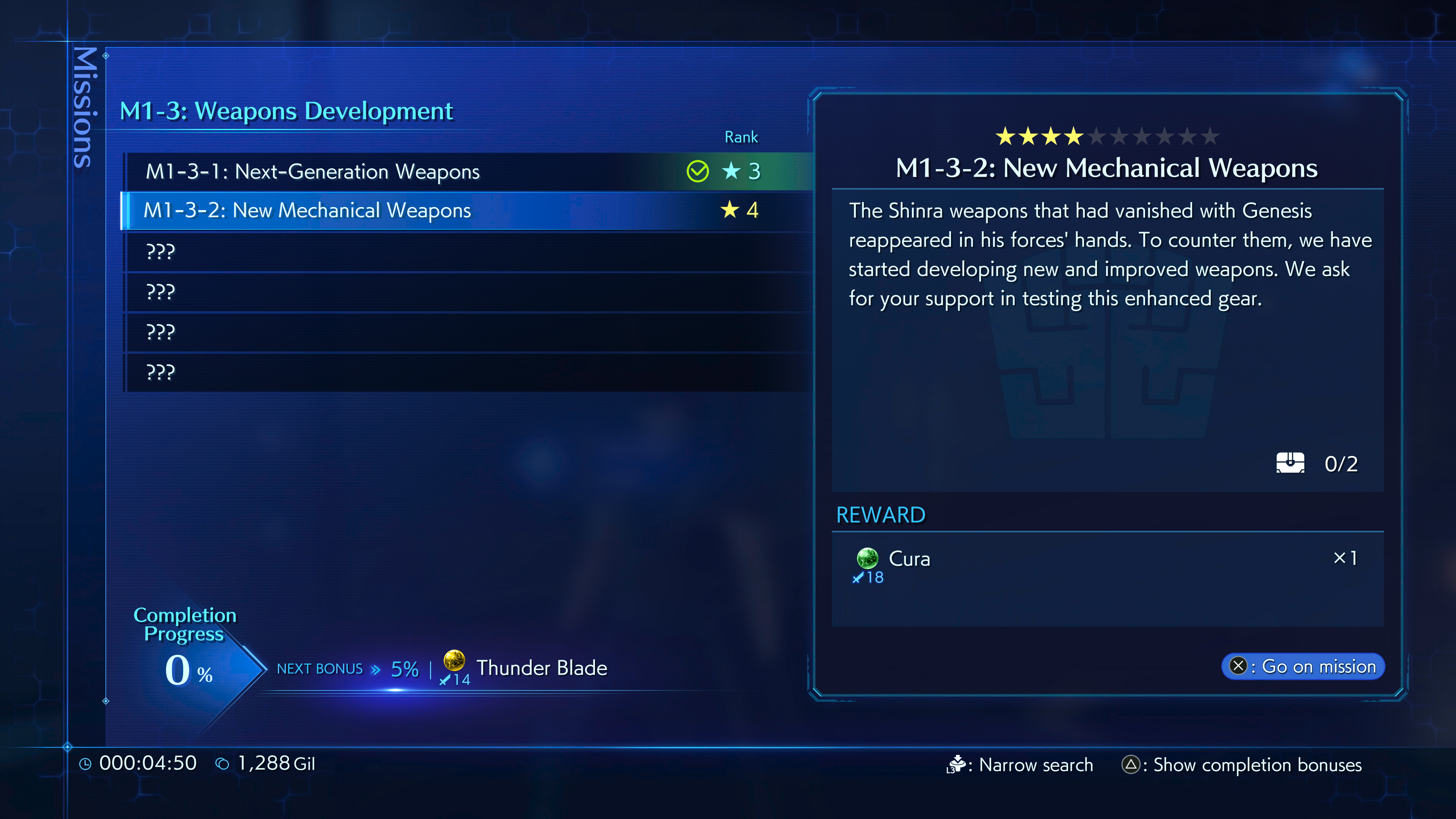 The world needs a new hero!

Zack has a sword at his disposal and pressing the attack button results in a combo. Alongside his melee moves, it is possible to equip various Materia, which range from the magic we already know, such as Fire and Cure, to buffs for the protagonist, such as additional health or attack, to special moves that do not consume MP, but AP, such as Assault Twister that does physical damage. The interesting thing is to see how all these skills can be combined. Thanks to the fact that the activation of these powers is almost instantaneous, there is nothing to limit you when fighting all the enemies in front of you.

However, what really stands out in Crisis Core is the system known as Digital Mind Wave, or DMW. At all times, a pachinko machine with various numbers and images of the important characters in the story will be activated. Throughout the fights, different combinations will appear on screen, granting a series of abilities and momentary upgrades. This means that, unexpectedly, Zack can become immune to damage in a short period of time or gain unlimited magic. The catch, and the reason many don’t like this concept, is that your level is also tied to luck. Enemies do not provide experience, and your attributes can only improve when the game says so. 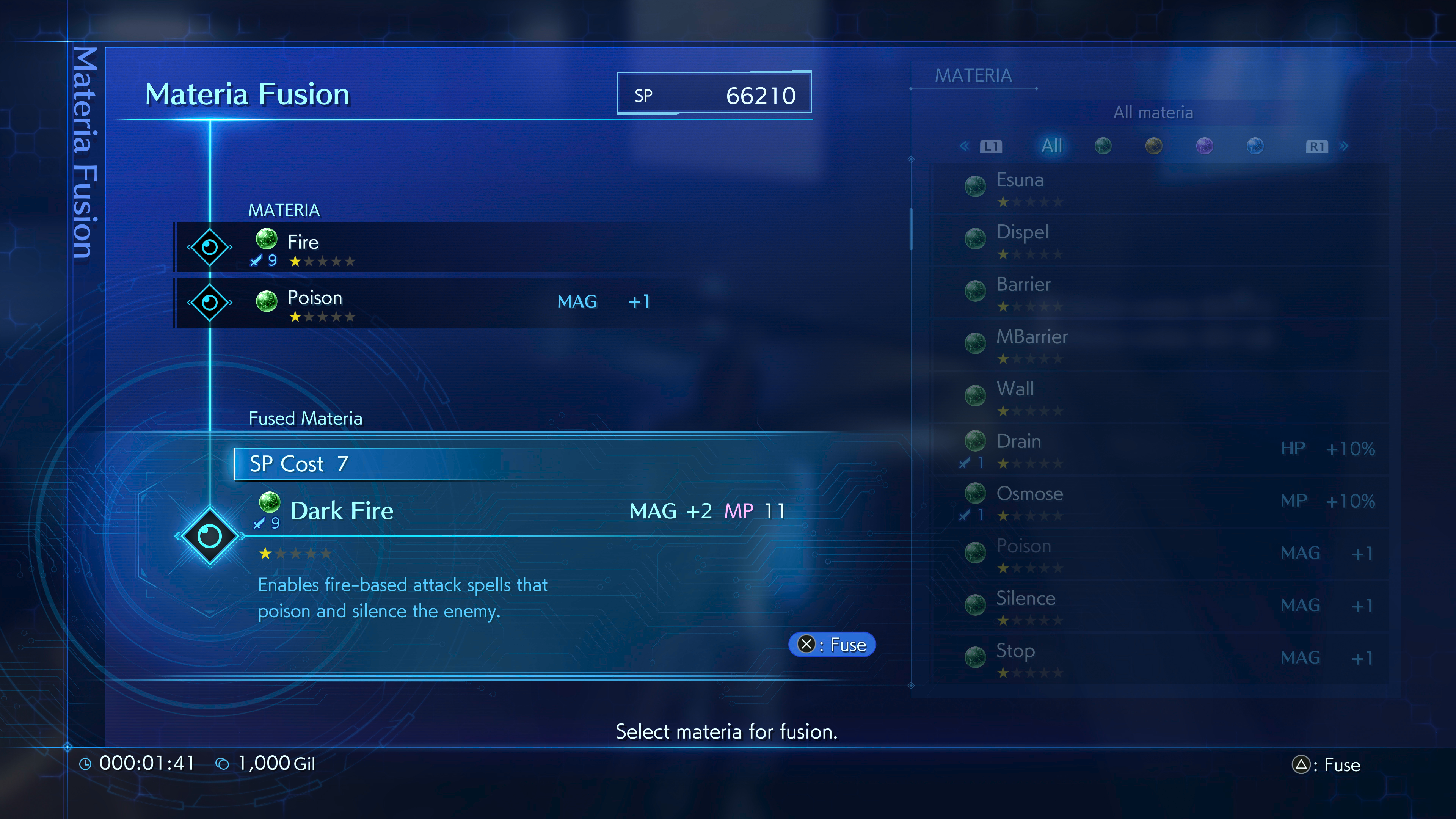 Sure, there’s a hidden system that takes into consideration where you are in the story, but it’s common to spend hours stuck at level seven, only for a single boss fight to raise you five levels, and this applies to subjects as well. Finally, the DMW gives us access to Ultimate attacks, which are tied to Zack’s relationship with some of the characters in the story, such as Aerith and Cloud, as well as summons, which do a large amount of damage.

One thing that has also stayed true to the PSP’s legacy is the structure of Crisis Core: Final Fantasy VII Reunion. The story is split into short chapters that last no more than an hour, and there are endless side quests that hopefully take you more than a couple of minutes. This is because the original experience was built with a handheld in mind, so everything was built to play for short bursts.

The additional content is repetitive and dated. What little variety exists in the main campaign, doesn’t exist here. Each of the missions asks you to take out a couple of enemies, a task you can accomplish quickly. Where this iteration shine is now these sections have become bearable because you do need to complete these tasks to get better materia and equipment.

Do not head into Crisis Core: Final Fantasy VII-Reunion- expecting anything new. Instead, welcome it as a side story of one of the lost heroes and companions of Cloud. In terms of a remake, the graphical and quality of life improvements make this an excellent yet hammy spin-off. It has a lot of writing that wouldn’t fly today and serves as a time capsule of an era long gone. It is a short experience and a vital companion to Final Fantasy VII, especially given how it ties right into the impossible ending of Remake.

Recommended
Liked
A good, yet hammy story, crucial to the lore of FF7
The DMW system holds up
Improved combat, visuals, and performances
Didn't Like
Side missions are a remnant of the PSP era
The dialogue can be cringy
Related