Catherine launched in 2011 to critical and commercial success for Atlus. To this day, there isn’t anything quite like it and thanks to a satisfying story, exciting puzzle gameplay, and solid voice work, the magic behind Catherine never seemed to dissipate in the public’s mind. We’ve seen it throughout the years at tournaments, becoming popular and a must-watch for viewers. In fact, the sheer popularity of competitive multiplayer is why the remake Catherine: Full Body includes a competitive mode for all to enjoy. This isn’t any old remake and I don’t want to treat it like one.

I still have my Artbook and CD Sampler from 2011. I discovered them while cleaning out my closet recently and remember why I kept this but traded in the game – the music and art are still excellent to this day. 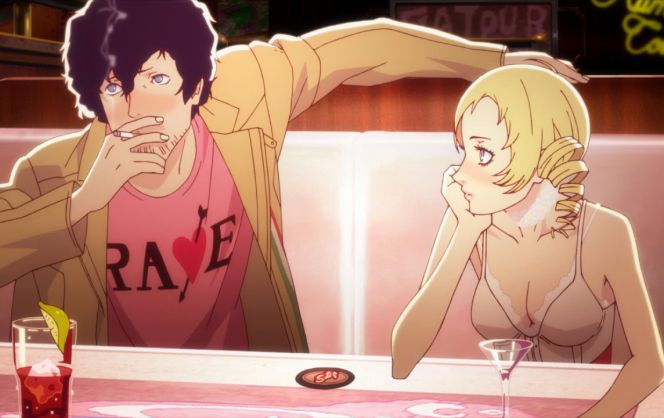 Playing as Vincent Brooks, a programmer who isn’t ready to settle down with his long-time girlfriend Katherine is like most millennials today. He has everything one may need to be happy, but he isn’t and as a 32-year-old too, I’ve been there. One night, Vincent is at his local stomping grounds, The Stray Sheep, when he runs into the mysterious Catherine; a woman everything his girlfriend isn’t and more in-line with what Vincent thinks he wants in a woman.

In the original, a love triangle between Catherine, Katherine and Vincent was the focus. With Full Body, a new character named Qatherine (or Rin) is introduced and effectively creating a love square (I had to Google whether one was even real) and throwing another woman for Vincent to deal with. Rin is nothing like the other women either, and is a gentle, almost innocent personality and supports Vincent. Rin is also woven into the existing narrative well, offering a new perspective when visiting The Stray Sheep, where she works. In some cases, the inclusion of Rin works, other times, she feels shoehorned in for the sake of being there.

As it were, each romance option plays out the same and unfolds just like the original. With Rin, however, after Vincent saves her one night, her romance storyline is a blink and you’ll miss it affair. A series of new animated scenes are spliced into the existing narrative, but the issue is if you miss out on nailing when to romance Rin, you’ll miss out on her story entirely. That being said, Rin’s story is entertaining but somehow feels out of place. 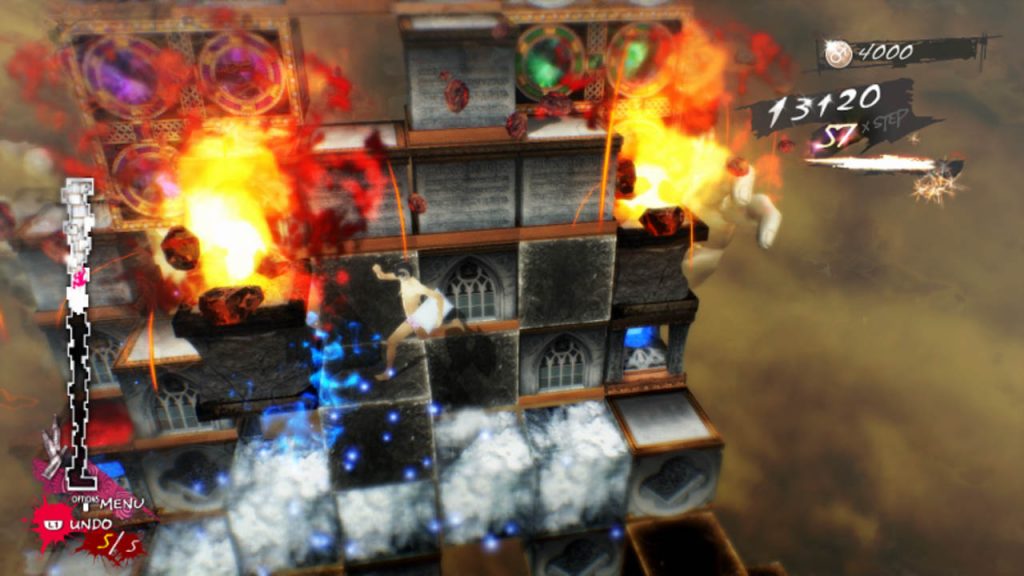 While the story remains largely the same as the original Catherine, the introduction of Rin, a new multiplayer mode and new animated scenes with five new endings. Also, a new difficulty mode is introduced called Safety which includes no game overs, no time limits, the ability to skip puzzles and autoplay when you get stuck. Atlus effectively doubled the number of levels to 500 and includes new stages for the Rapunzel minigame, and new levels within Babel and the Colosseum.

Catherine is a puzzle game which all take place within Vincent’s nightmares. Each night, Vincent goes to sleep, and his dreams are plagued with nightmarish images. In his dreams, he takes on sheep’s horns and navigates the dream world in his boxers. Every night, Vincent must climb floating staircases that collapse as he makes his way to the top. These Nightmare stages require Vincent to move swiftly in order to earn score multipliers. Various types of blocks offer a challenge, and these range from ice blocks to spikes, so it’s best to learn how to clear these hurdles quickly.

Throughout the game, Vincent is faced with a Morality meter which is affected by player choices. The way you reply to texts, how you interact with people, and how Vincent replies when asked questions all affect this meter. Basically, this affects how story beats play out and affects the ending.

So, how does Catherine handle on the Nintendo Switch? If you’ve played the game on either PlayStation 3 or PlayStation 4, it’s going to be familiar to you. There is no shortage of content and that trend continues as the game comes to Nintendo’s hybrid console. That said, surprisingly, Catherine: Full Body runs wonderfully in both docked and handheld mode. I expected some minor framerate hitches or lag when moving upwards in a puzzle tower but nary an issue came about. It’s clear that Atlus cares for their games and the port delivers an exciting on the Switch.

Let me make this clear: Everything needs to be on the Nintendo Switch. Every. Single. Video Game.

Catherine: Full Body is as wacky as ever and is as much fun to play as it was in 2011. With a stellar cast, engaging puzzle gameplay and an excellent score from Shoji Meguro guiding you through a nightmarish landscape, the nearly nine-year gap for Catherine stands the test of time. New puzzles, new cutscenes and remixed levels add enough to revisit The Stray Sheep and even though not everything lands, this is an exciting remaster that deserves a sequel.