Bravely Default launched in 2014 to positive reviews and fanfare. What particularly worked was ho many typical JRPG tropes were turned sideways and improved upon, creating a brilliant experience on the Nintendo 3DS. A familiar and welcoming return to the Japanese role-playing genre and a return to form that many were sure that Square could meet expectations of its many fans. Oh, how they were wrong. Bravely Default told the story of four heroes and their tale to restore balance to their world by saving the crystal tying them together. Well, they obviously did that just because Bravely Second: End Layer is a sequel and takes place a few years down the road. Agnes is a religious figure of the Crystal Orthodoxy and the world is at peace after the events of Bravely Default. Agnes is kidnapped during the opening moments and the game introduces us to Yew Geneolgia, a young knight, and his companions, Janne, and Nikolai, who must embark on getting Agnes back.

By the way, Yew is a great addition to the cast of this world. He’s a funny little fellow and from the way he reacts to his hilarious journal entries, quickly became the star of the show for me. I fully expect his humour to continue to the eventual third entry in the series. You heard me, Square!

The story setup is rather basic, and yes, you’ve seen this scenario countless times and what to expect when you’re exploring the sequels offerings. Silicon Studio manages to bring together most of the issues together to create a coherent sequel to a beloved game.

The battle system of Bravely Default returns in the sequel and the surprisingly strategic and intricate ways to conquer your enemies is intact. The basis of the battle system is you are given the option to Brave or to Default. Deciding to Brave will allow you to pool your attacks (up to four turns in a row) into one mega turn, Default will allow you to defend and store (again up to four) turns for a more strategic battle in the long haul. There are two things that make my experience with this game and this series all the better. If you’re thinking about the ability to adjust the encounter rate through the world map and dungeons by decreasing or increasing the difficulty. If you find the battle system trivial and want a challenge, ramp up the difficulty. There are many variables here that work for the gamer in mind, if you defeat a mob of enemies in one turn, you can select to continue fighting and another mob will appear and as you keep the enemies coming, your rewards will increase exponentially. Each class excels at having better usage for either Brave or Default, a tank is best used to store attacks for a last-ditch effort to take down a boss, or your healer to utilize more turns to heal more HP during a boss battle that nearly knocks everyone out.

The Job system also returns and while the amount of playable classes available and while many Final Fantasy known titles are available (Knight, White Mage, Black Mage) to other enjoyable classes (Yokai, Catmancer, Hawkeye) and all have their own set of commands to master. There are two dozen Jobs to master here. Bravely Second is a beautiful game, the backgrounds, sprites and music all come together in such a way that everything feels artisan. The environments are best viewed in 3D that only the Nintendo 3DS is capable of, it’s a sight to behold. There is a ton of detail in the characters and the world you are exploring. Bravely Second is a solid game and packs tons of content for a handheld title. This in mind, the sequel to Bravely Default doesn’t feel as groundbreaking and impactful as the first game. This shouldn’t be a deterrent to avoid the game, no it is definitely one to add to your collection. If you want to pass on Bravely Second, I’ll have to tell you that there is a game created with love here and by skipping out on this labour of love you’ll miss out on one of the 3DS’ best offerings. 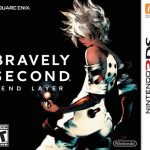