I spent the summer of 2014 in Greece and Bravely Default was the one game I spent the entire month obsessing over. In Greece, many tourists flock to the beaches all over the country. For my family, we have our routine that includes heading to the beach each morning and going for a swim before heading to our cabana and enjoying the sunshine and blue water. It’s where I started and finished the first game in the series and fell in love all over again with traditional JRPG mechanics. And while the sequel, Bravely Second failed to live up to the first game for me, I’m rekindling my love for these mechanics all over again with Bravely Default II.

Despite being called Bravely Default II, it has no connection to the previous two games, which released as a duology. The third game in the series is set in a new world with new characters and it’s all the better for it. I’m just happy to see the series live on because for a while there, I was worried Square Enix would quietly move on from the series.

There’s a lot to love about the highly-anticipated sequel. For starters, there’s the return to traditional combat that many franchises have decidedly moved away from. It’s comfort food for the soul and yes, it’s very familiar if you’ve ever played a turn-based RPG. Over the years, even as the genre seemingly evolved into faster, action-focused battles, I get the appeal keeping the player engaged. However, nothing comes close to the idyllic style of being able to take your time and approach a scenario with strategic insight.

Many familiar tropes rear their head from the get-go and that’s partially why Bravely Default II resonated with me. The game begins with Seth, the protagonist, finding himself shipwrecked in unfamiliar territory. Gloria, a princess has had her kingdom devasted, so she sets out to harness the crystals. Elvis is on the hunt to decipher a mysterious book left to him by his mentor and Adelle is a hired mercenary that protects Elvis on his journey. It doesn’t take long for the four to gather and embark on their quest to recover the crystals. 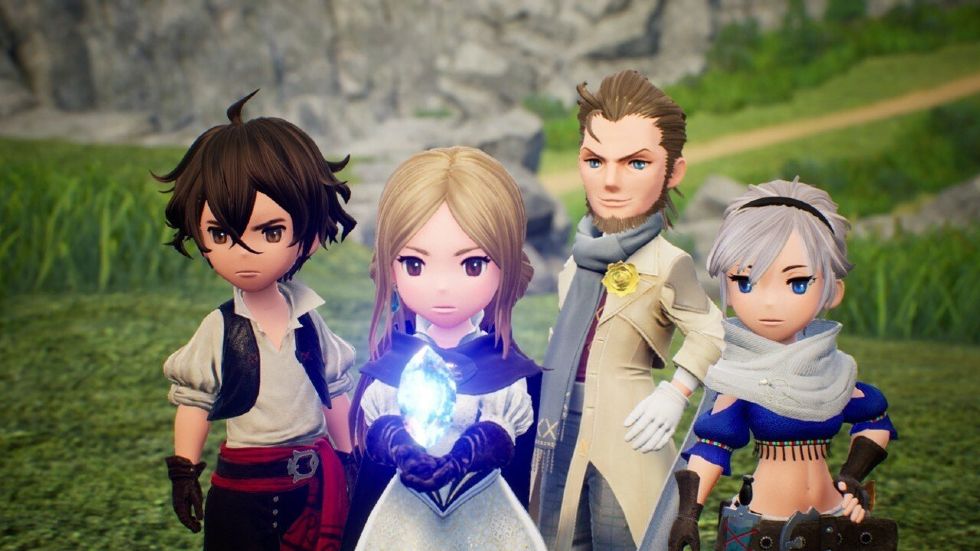 You’ll uncover the story as the four heroes of light (really) move from town to town. Your party will end up in a town and there you’ll mingle with the locals before offering to help them with whatever their issue is. Then you move onto the next location, while acquiring new equipment, becoming stronger, rinse and repeat. It’s not bad by any means, but don’t expect anything new, you’ve seen this formula before but it’s successful in execution here.

The battle system used in the game is largely traditional and with The Four Heroes of Light in your party, you’ll engage enemies in turn-based combat. What separates Bravely Default II from other games is the inclusion of Default and Brave attacks. In battle, you’ll be able to attack enemies as you normally would. Stacking Default is a safer route and you’ll defend against enemies while banking additional turns, up to a maximum of four times. When choosing to Brave in battle, you’ll stack four commands in a row. It’s a great mechanic theoretically but it’s also a double-edged sword. For every turn you Brave, you’ll have the same cooldown period and your character won’t be able to react because of it. 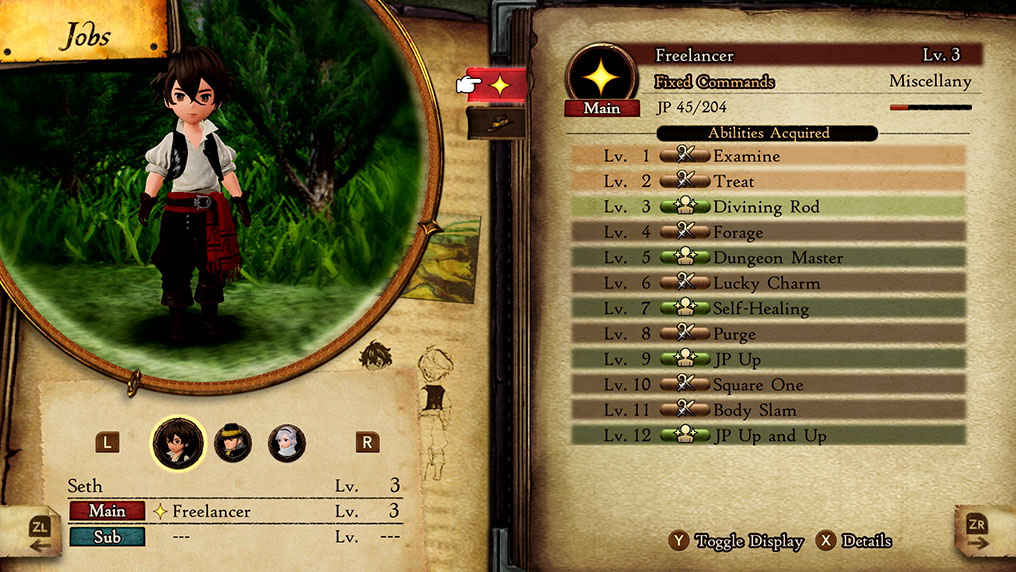 The idea of risk vs reward is a large part of what I find to be so engaging. By allowing me the ability to gauge a scenario and plan my strategy and have it pay off, it feels good. And if I decide to engage an enemy, throw everything at them and then have the enemy slaughter my team? That’s on me and my decisions that led to that defeat. There’s this learning curve that’s hidden within the battle system and finding the right balance of what works and what doesn’t is what makes it so much fun.

A change from the previous two games that I found to a huge bonus is the way battles unfurl. Previously, you would plan your entire team’s strategy and watch their actions play out. Now you have each character set up their tactics when their turn rolls around instead of the entire party at once. This change takes some time to adjust to because the flow is entirely different from previous games. 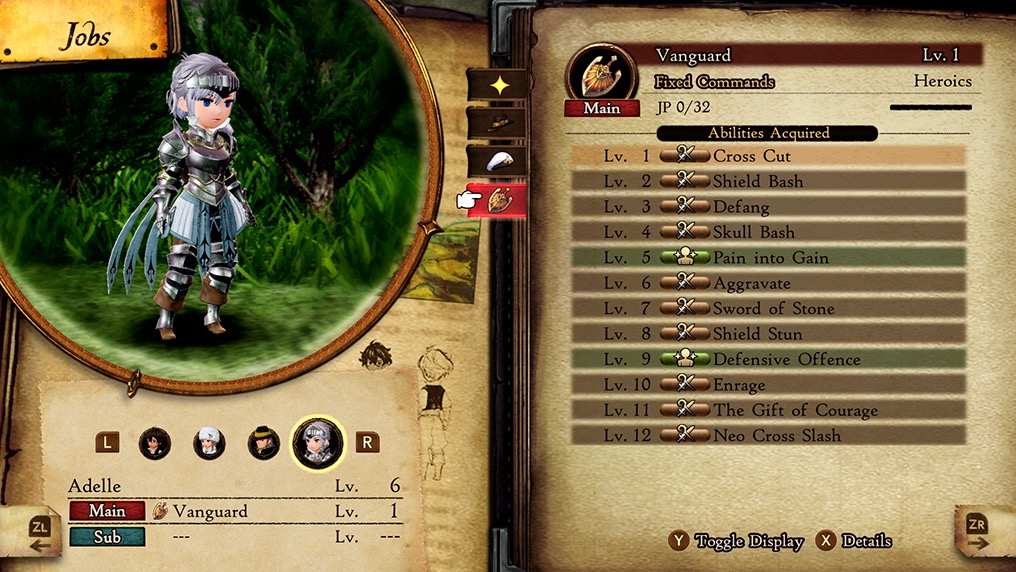 There is one thing that’s bothered me from the first demo up until I started playing the final retail copy for review. In previous games, you would see your party from the front. In Bravely Default II, you’re pretty much staring at the backs of Seth, Adelle, Elvis, and Gloria and I’m not sure why the developers felt like they needed to do this. I’d have appreciated it if the camera panned out a bit more – it isn’t like the Switch doesn’t have the real estate to show more of the environments you’re currently in. And that’s a huge shame because many of the jobs you’ll unlock include some pretty cool costumes that aren’t put on display to the degree the previous games did. 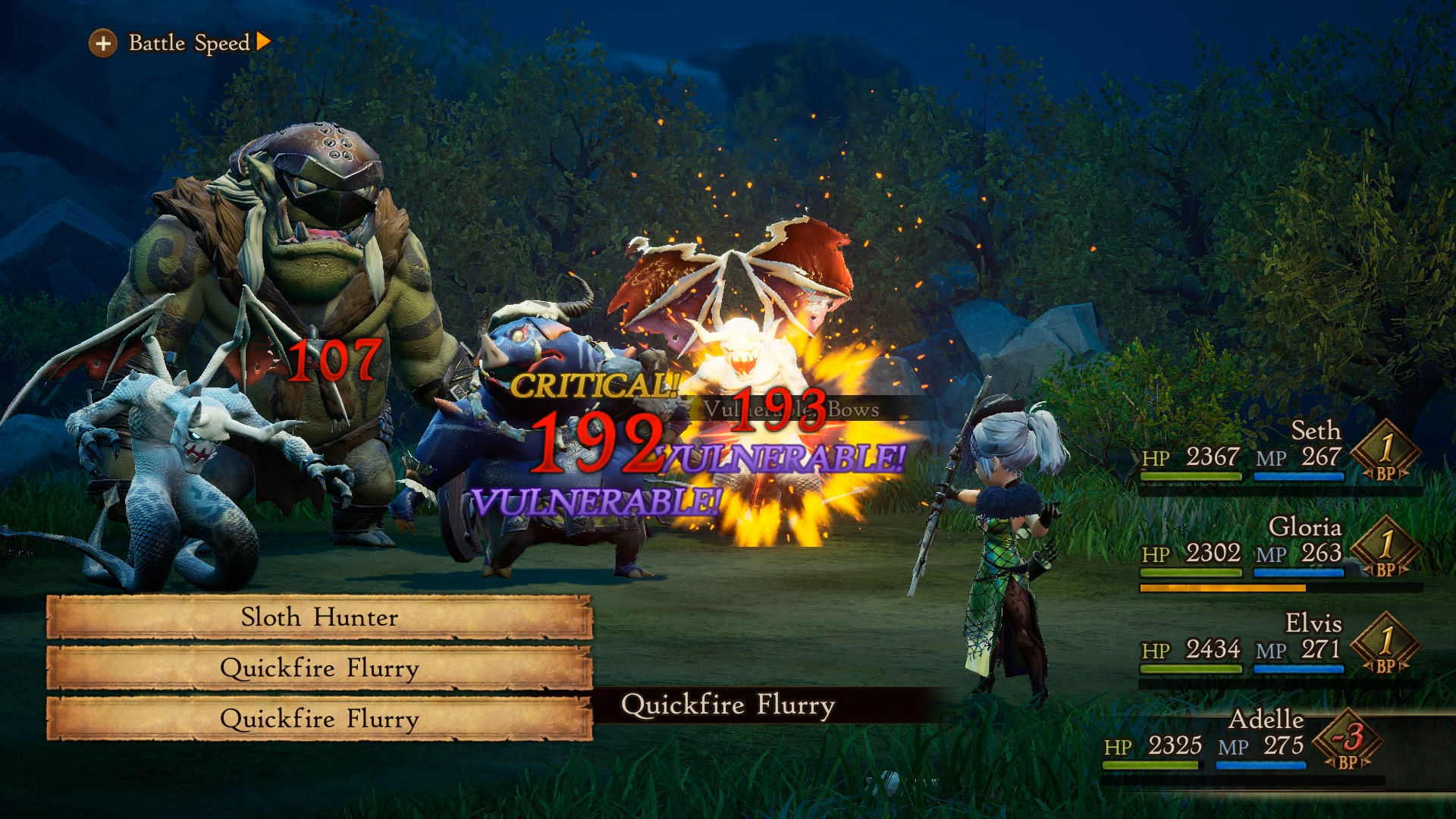 Borrowing from older Final Fantasy titles is the extensive job class system. In this series, Asterisks give their user the ability to gain access to new jobs. Each character equips one main job and another sub-job, the main job changing your appearance and the main growth path to level up with JP (Job Points); the sub-job complements the main job and you’re free to equip skills from both to personalize your character.

In general, I’ve found that with Bravely Default II, you’re given a ton of freedom to mix and match jobs to fit your playstyle. What I mean that the Berserker Class, for example, makes better use of the Brave/Default mechanics this go around. I learned the hard way that battles will punish you if you get too confident or careless with your decisions. 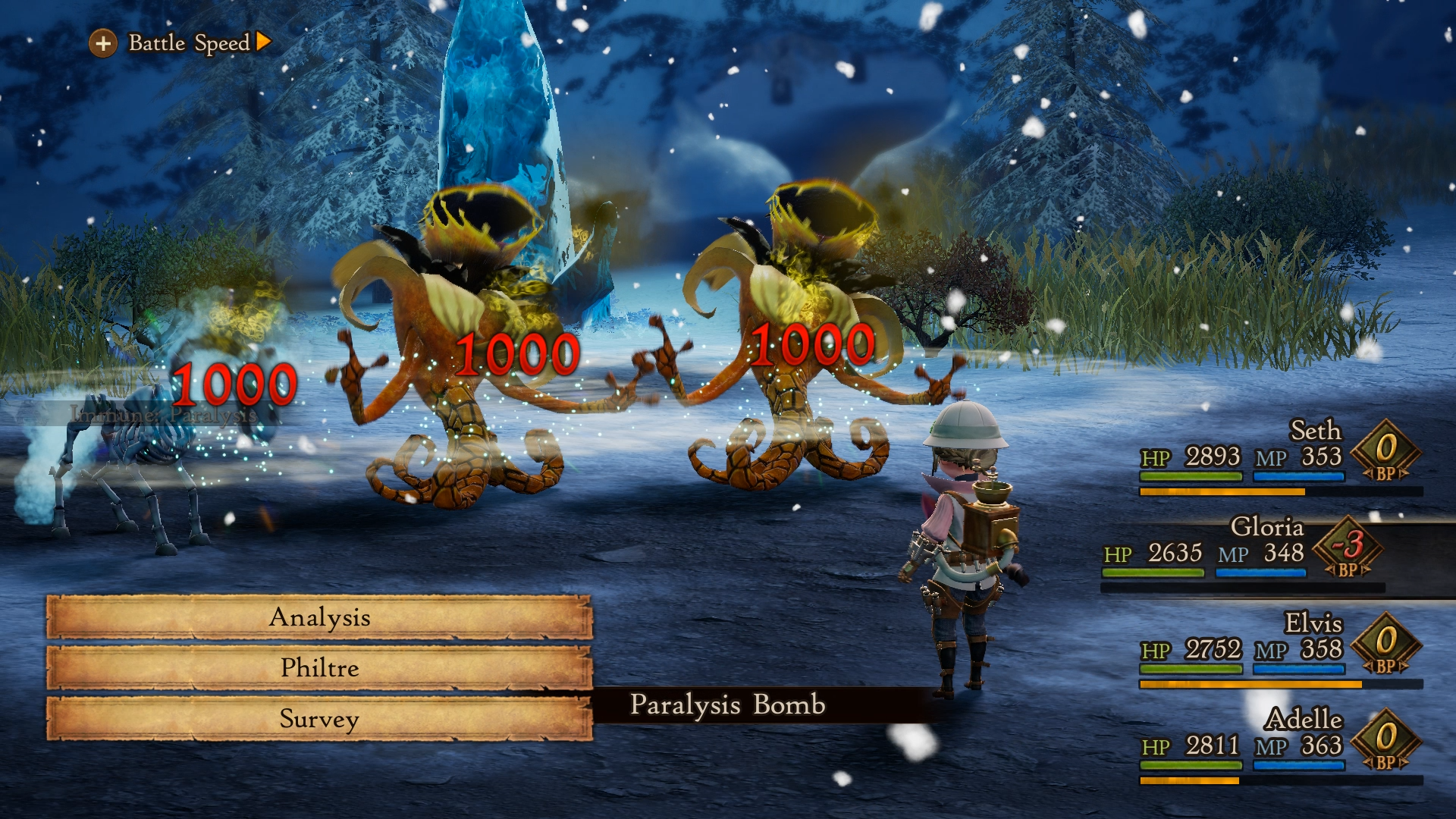 And to top it all off, random encounters are gone. Now, you’ll see enemies on in the field and you can smack them with your word or engage them from behind pre-emptively. I’ve long hated random encounters so I’m happy to see Claytechworks remove them entirely from the game. Thankfully the ability to speed up battles up to 4x the speed makes the grind more bearable during regular battles, it’s a huge drain having to perform tasks at regular speed and when dealing with bosses, you’ll be doing a lot of grinding in Bravely Default II so automating some of the process is appreciated. 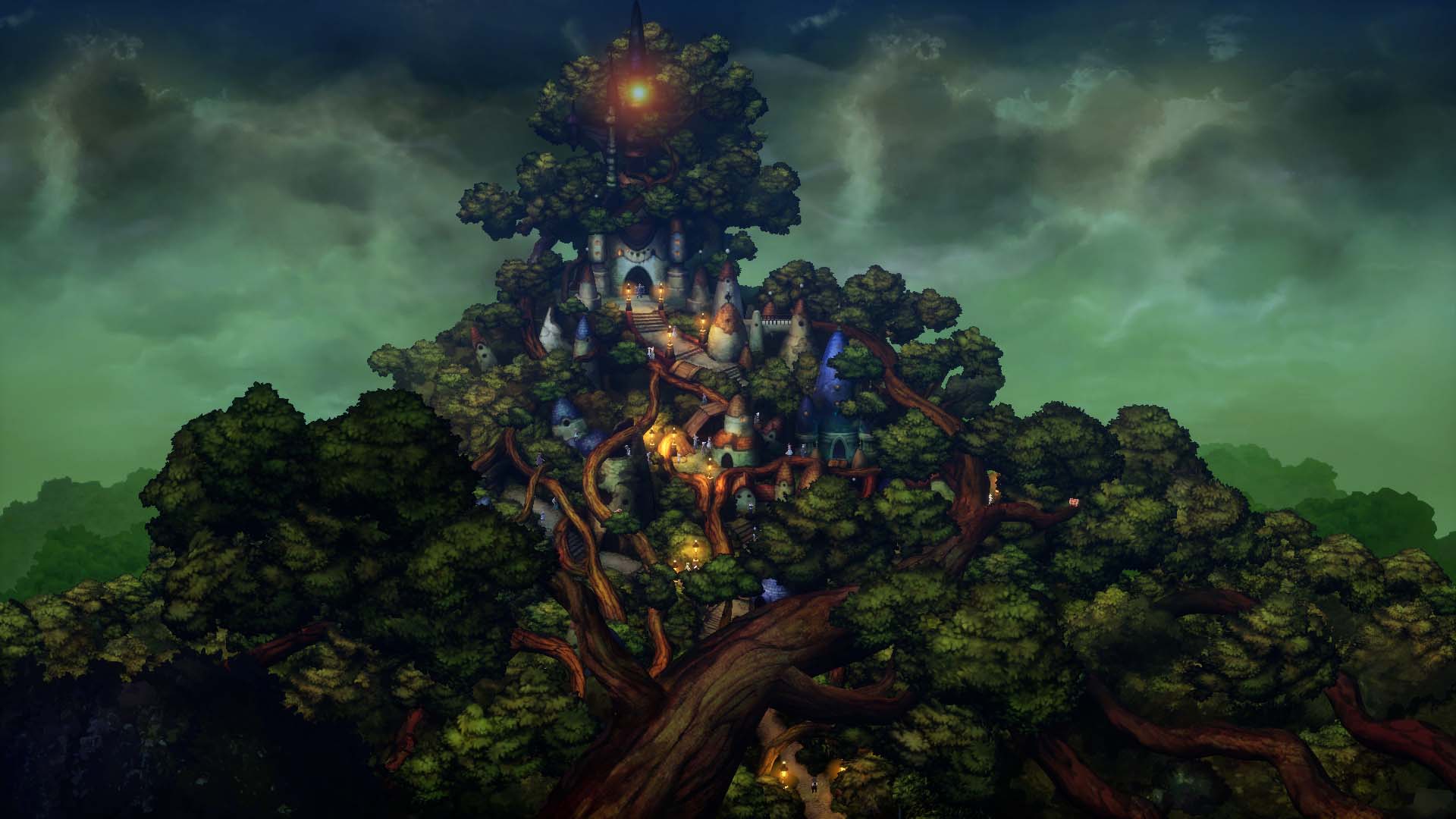 If you’re a fan of sidequests, Bravely Default II has you covered. From the opening hours, sidequests are the best way to earn money early on. I’m not too keen on sidequests in most Japanese games because the developers seem to use them as a filler and that’s mostly true here. However, it’s one of the better ways to earn income when you’re looking to gain better gear.

Bravely Default II brings the series to the Nintendo Switch but the transition isn’t exactly smooth. This is the best-looking game in the series and it takes advantage of the hardware but it’s still not great.  I thoroughly miss the backgrounds the 3DS games offered thanks to the stereoscopic technology of the handheld console.  Playing on my television, the backgrounds are beautiful but a bit rough when in a town or dungeon and the backgrounds often clash with the character models and they don’t animate as well as the older games on Nintendo’s handheld console. There is this weird, plastic look that becomes offputting. 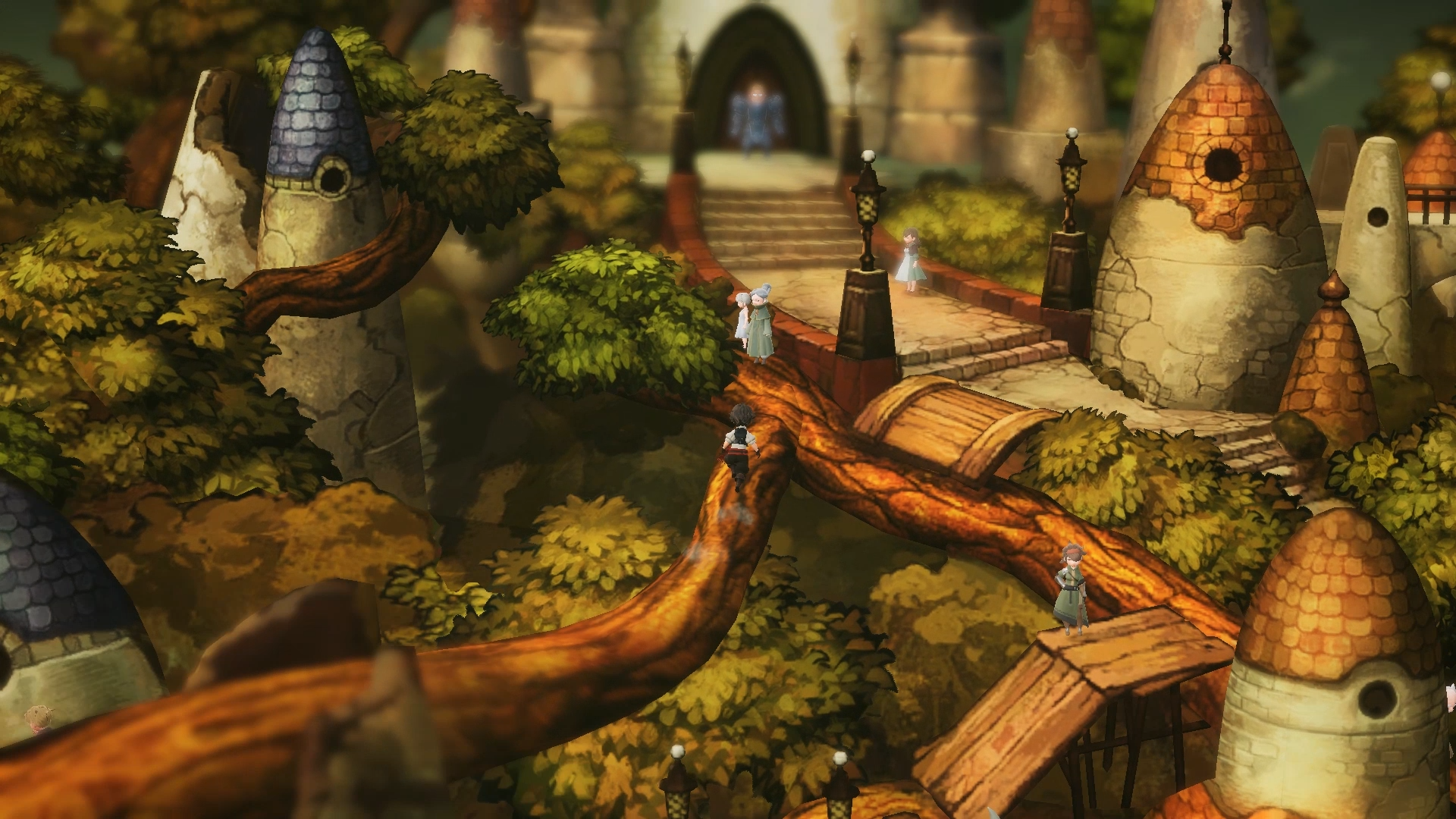 What you might not find notable however are the dungeons, which a pretty as they are, are rather rote and one-note. When you head into a dungeon to continue the story it is essentially a maze you need to navigate while finding the right switch to open the path forward. It’s not exactly the most engaging experience and it really only serves to push the narrative forward. There are no mechanics that are incorporated that make exploration worth it other than to get to the next chunk of the story.

Bravely Default II doesn’t shake up the formula too much but the things it does shakeup, are far better off for it. The things the developers took to heart and improved upon make all the difference. Sure, there’s not a breakneck pace in battle but there’s a strategic layer to the battle system that turns each battle into a lesson, and with a highly customizable class system, it’s fun to mess around to figure out what works. The game is packed with gorgeous cities but it’s also plagued by uninspired dungeons and the character models leave me feeling uneasy. At the end of the day, this is comfort food for fans of JRPGs but it also takes a few steps back from the previous games, it’s still fun to play but it’s more tedious now, too.