The reveal of Experiment 101’s first game, Biomutant has faced an uphill battle from day one. For a studio full of industry veterans, many from Avalanche and having worked on Just Cause, I was interested in seeing how they would apply their knowledge to a new video game. Having been leaked via a German video game magazine, the idea of another post-apocalyptic game featuring a raccoon had some explaining to do and nearly four years later, we have the answers.

The game’s prolonged silence left some worried about the development of Biomutant. But the small team wanted to make sure their first game launched in a finished state instead of a buggy mess. I’ve always been one to support the delay of any video game that needs more time in development. Experiment 101’s choice may have saved the game from having a jumbled and messy launch.

So, is Biomutant what we all thought it might be? In some respects, yes, it’s exactly what you thought the game would be but also does some things well. Biomutant is an open-world game set in a post-apocalyptic world where anthropomorphic animals’ mutants live, where six warring tribes are accelerating the decay of the planet’s biggest pillar of all life. Within this world is the Tree of Life, a mystical tree that is dying of poison.

While the world is slowly recovering from the adverse effects of pollution, there is now a new threat known as World Eaters wreaking havoc on the Tree of Life by gnawing away at the roots of the life-sustaining tree. It’s up to you to discover what’s happening to the world in this roughly 15-20 hour campaign. And while I enjoyed the main questline, the sidequests are padded and sometimes unnecessary, leaving you with a bloated playtime.

Biomutant offers a wealth of content but its all the same

What I appreciate about Biomutant is how open the game’s systems are.  For starters, the character creator features a robust selection of options to customize your character. The game begins with you choosing your breed from Primal, Dumdon, Rex, Hyla, Fip, and Murgel: picking one of the six breeds determines your physical appearance. Next, you adjust the six attributes that players improve are Strength, Vitality, Charisma, Agility, Intellect and Luck and these affect your appearance even further. An example I’ll give is if you decide to be more charismatic, your character will smile more and may have better odds at bartering merchants. You can also adjust your genetics including your resistance and customize your fur, too. 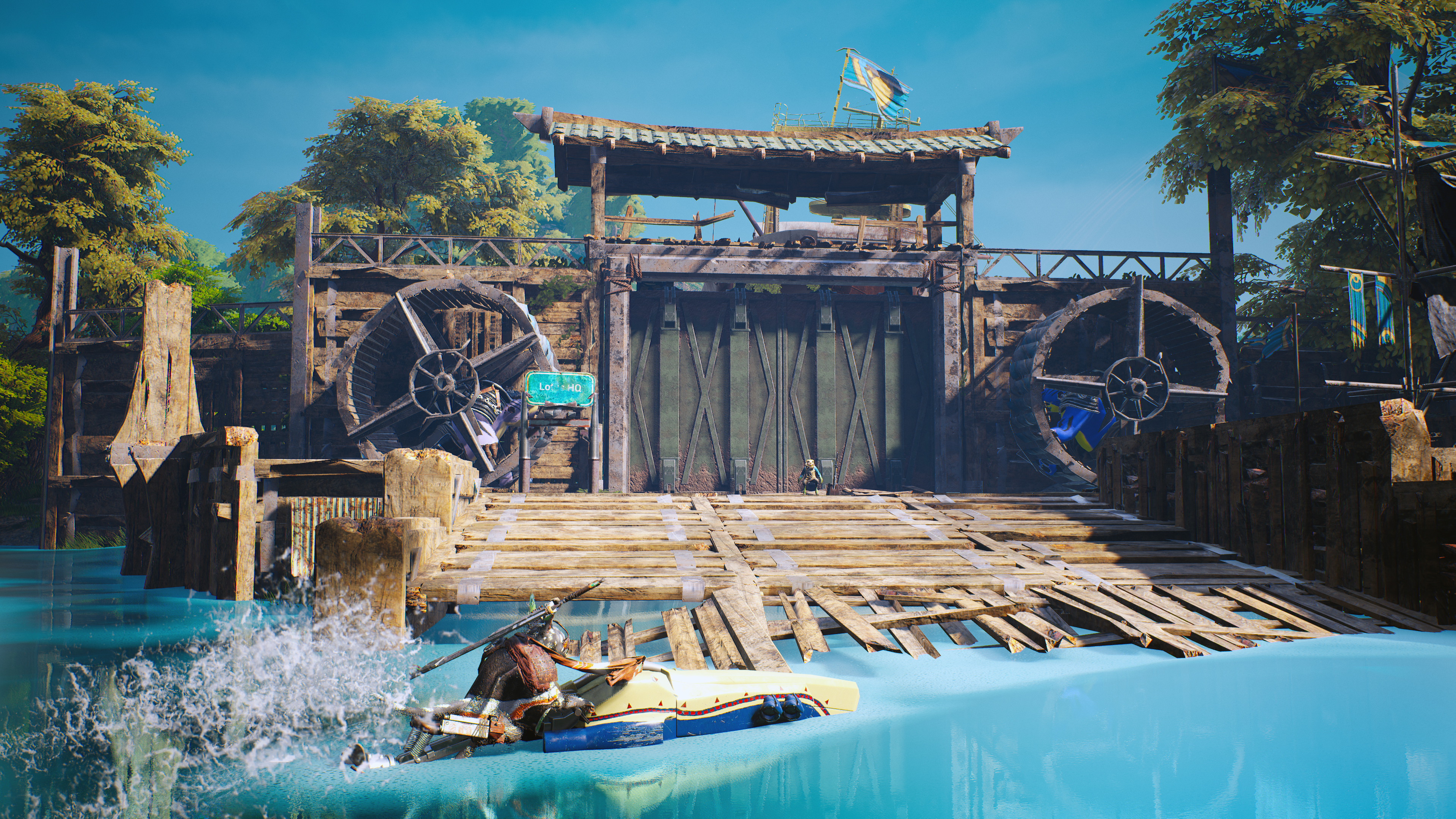 Biomutant’s RPG systems provide a ton of customization options including skills to learn, attributes to raise, and perks to choose from – the level of freedom to create your character is exciting, if not sometimes overwhelming.

With a short tutorial section kicking off in Bunker 101, the game quickly drops you into the open world and you’ll pick the tribe you want to ally with, which generally molds the path you’ll take moving forward. Your character is asked by the ally tribes to conquer the other settlements spread out around the world. In theory, this mechanic could offer a fun way to explore the entire map but when it comes down to it, you reach a settlement then tackle waves of basic enemies before receiving a new weapon. 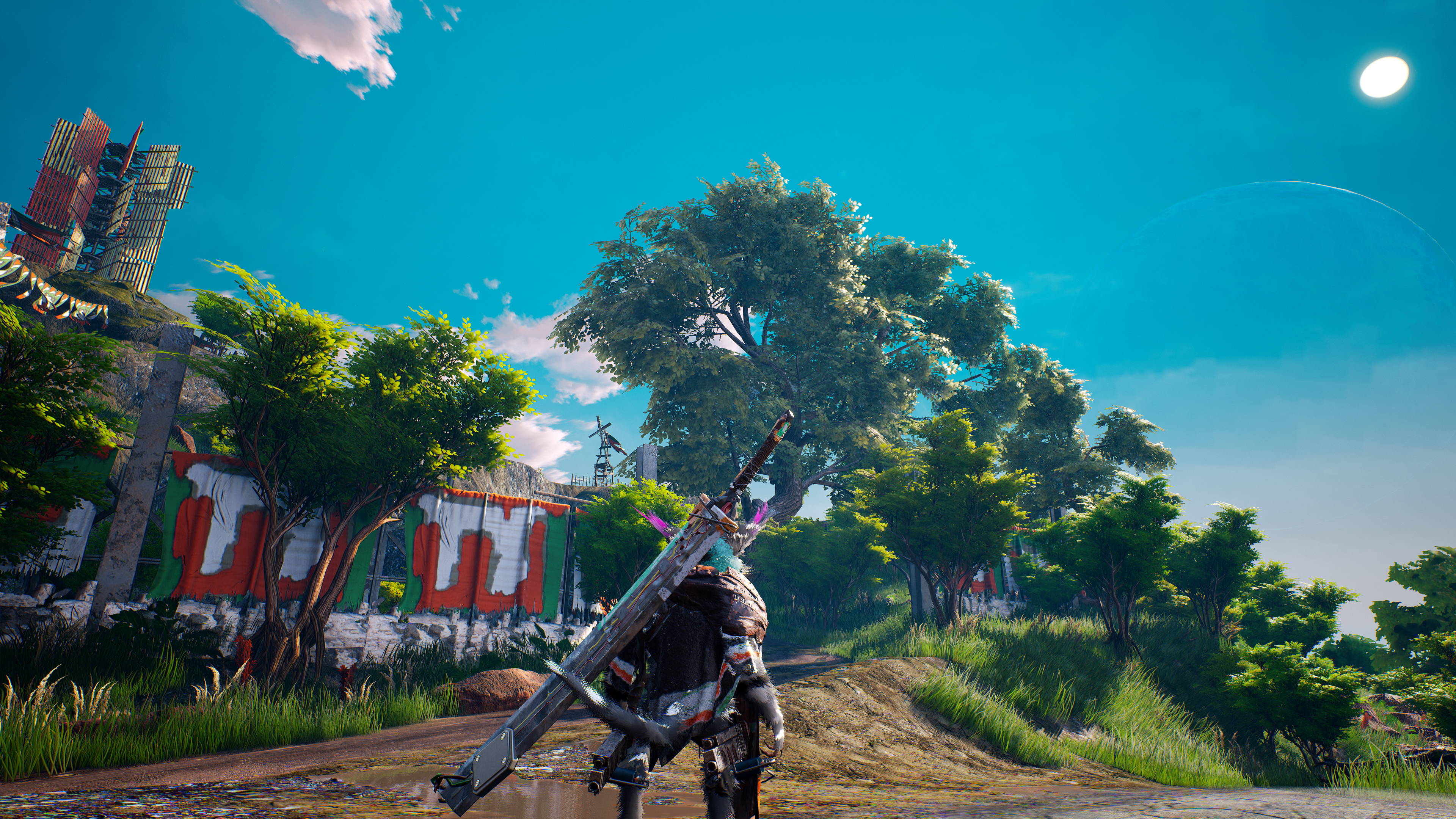 The omnipresent narrator is voiced by David Shaw-Parker and is with you the entire campaign like in Bastion, Transistor, or Bard’s Tale. I enjoyed hearing his commentary, gaining his insight into the events unfolding on the screen. He also comments on everything from potential weapon upgrades to levelling up and his innate charm is key to enjoying the weird and wild world of Biomutant. A lot of the world-building and exposition is done through the narrator and it’s a charming approach to telling the overall story but there are times when his role falls flat and some may even find him grating.

Combat is ultimately fun and engaging to a fault. Basic attacks are marked to square, O is a dodge, L1 parries and R1 reloads your pistol. R2 unloads your ranged weapon and elemental effects can be attached to your bullets. Battles consist of three major pillars of combat, melee, ranged and Psi/Bio powers and generally there is an overabundance of choices to choose from giving you the freedom to create a character uniquely your own. As a Deadshot, I use two-handed weapons and a pistol as my starting weapons but there is a good level of freedom the further into the game you get. 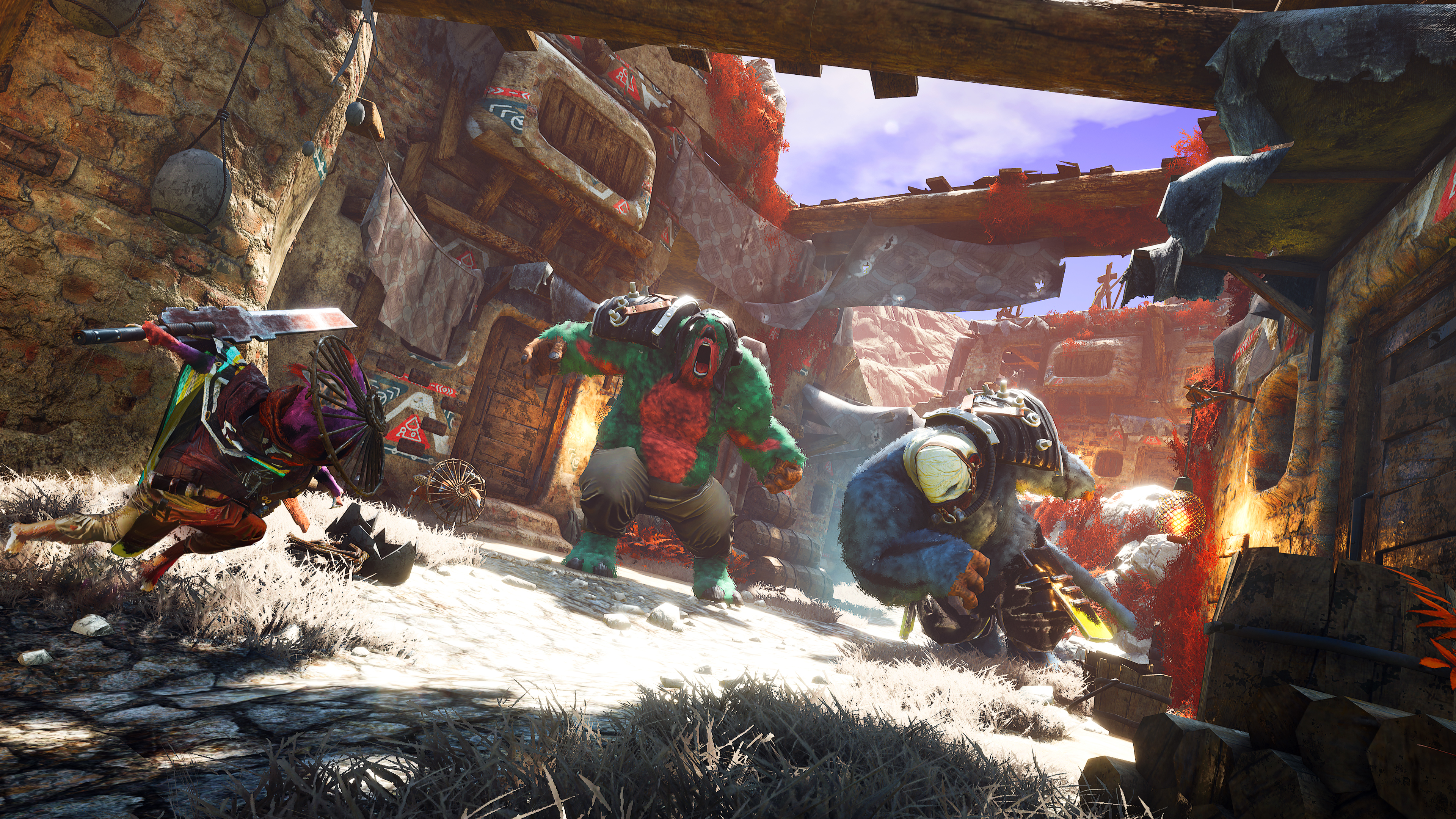 The fun begins once you unlock the various combos, and that’s where things pick up. Melee and ranged attacks are needed to build up your attacks, which then flow into combos. These combos help your character build toward unleashing Super Wung-Fu, a state that becomes active by successfully pulling off three Wung-Fu attacks. It isn’t too difficult to pull this off and you’ll need to make sure you time your parry and dodges to keep your streak going. Everything about the battle system builds toward using these special attacks but the downside is a lot of the time when in battle, you’re stuck nailing the same handful of combos to reach this state.

Thankfully, Psi/Bio-powers add another layer to combat. Early powers like Mothmouth make encounters a lot more fun since you can infect enemies with your power and make them attack their allies instead of you. Blaze leaves a trail of fire behind in your wake, giving you the ability to dash forward and strike down opponents. My favourite thing to do is experimenting with the various powerups the game offers and really finding the right groove, and while I don’t think this system will resonate with everyone it’s an overall fun way to tackle enemies. 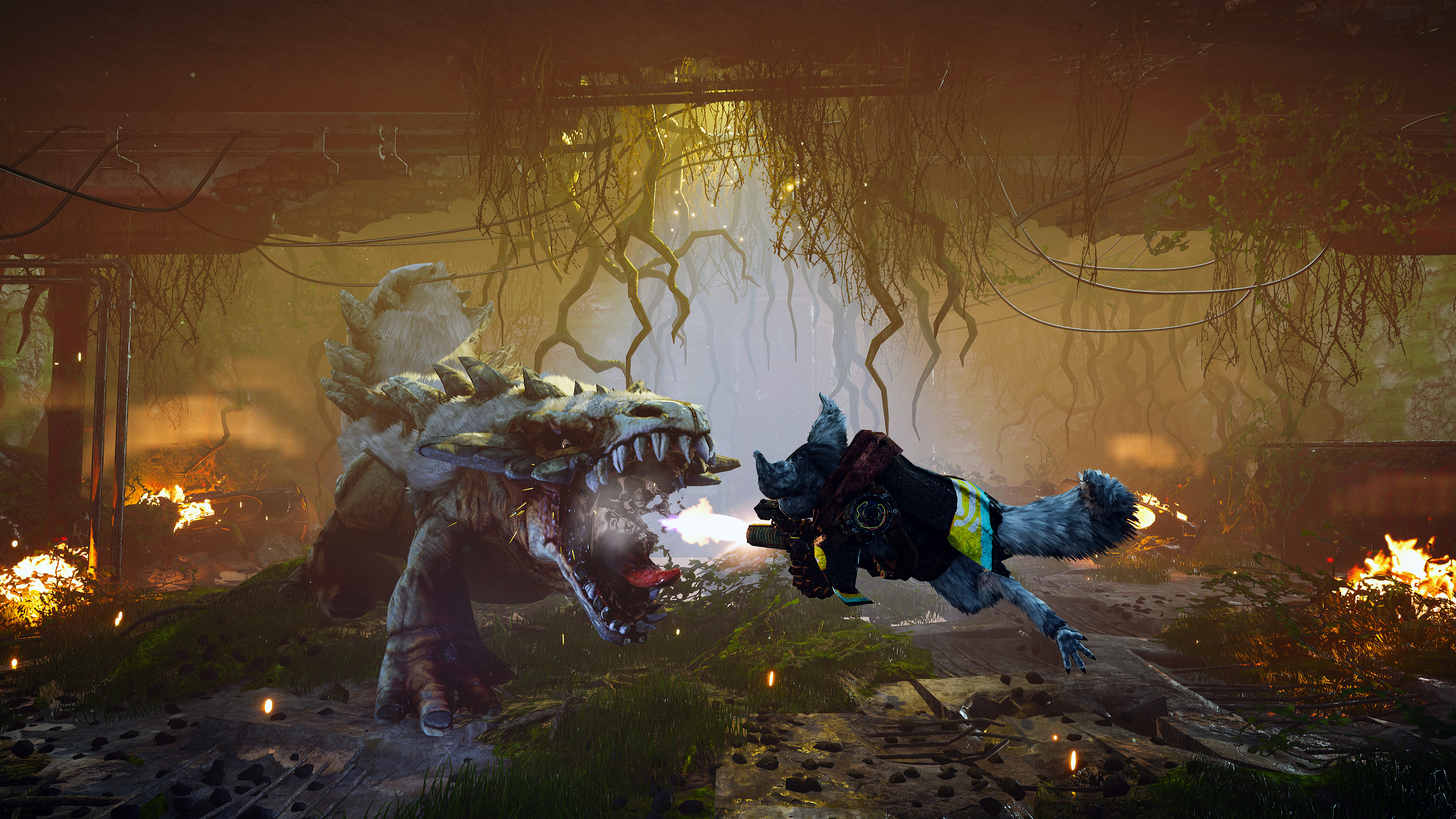 Upgrading weapons and guns with loot is fun because it encourages you to explore the map and some of the better loot is gated behind restricted areas. These areas require you to be well-equipped to even enter them. Spread across derelict towns and buildings, most of the loot is required to improve your gear but during the later stages, there’s a lack of incentive to explore the hazardous area to gain better loot.

It took some time to find the flaws because the opening hours were commendable but the boss battles in the latter stages do not hold up. You have several World Eaters to deal with and the first encounter sets the stage for the rest of the boss battles. Lying in wait at each of the Tree of Life’s roots are the World Eaters and while these boss battles should be showstoppers, they end up being all similar. A character explains what you need to do and lays out the vehicle required to get there and the part needed to get things working, rinse and repeat. Sure, some of the vehicles are fun but they aren’t used enough to make them worthwhile and all this build-up to these encounters is only too tied to using a vehicle. 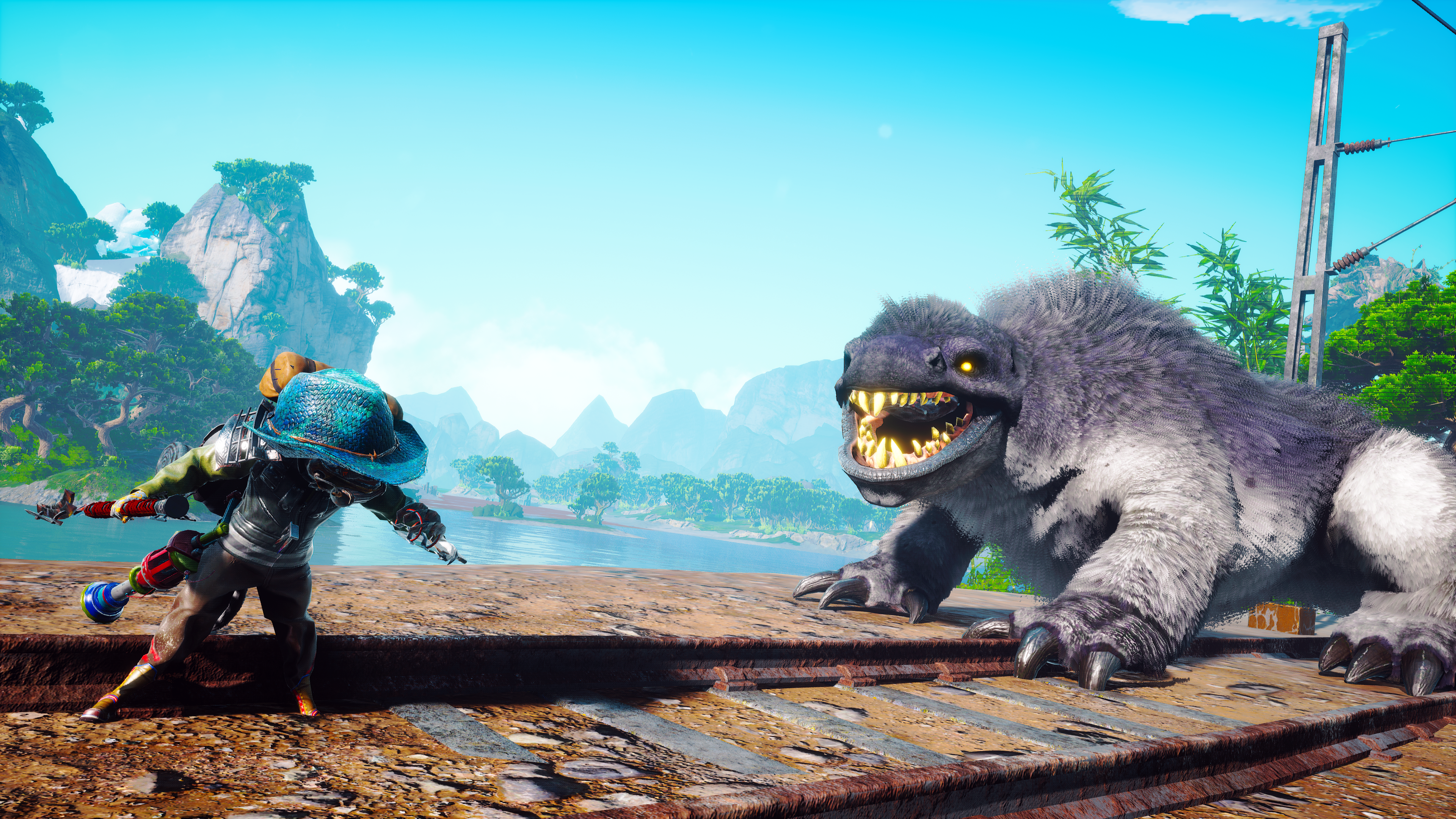 And there’s also a morality system introduced from the start that lets you choose between the light and dark aura. Aura is a mechanic that influences your character’s actions and many of your decisions and conversations. Thankfully, you’re not locked to one side of the spectrum and you may even turn your character into a morally grey character.

These decisions end up being inconsequential however and have little impact on the overall story. I found the earliest decision the most impactful – choosing your preferred tribe. This ties into the light and dark aura choices you’ll make and one tribe wants to unite the world against the World Eaters while the other tribe wants to lead the other tribes and start the world over. This choice is what ends up dictating most of your playthrough as you’re either good or bad, building up your objectives over the course of your playthrough and how you’ll converse with the world’s inhabitants. 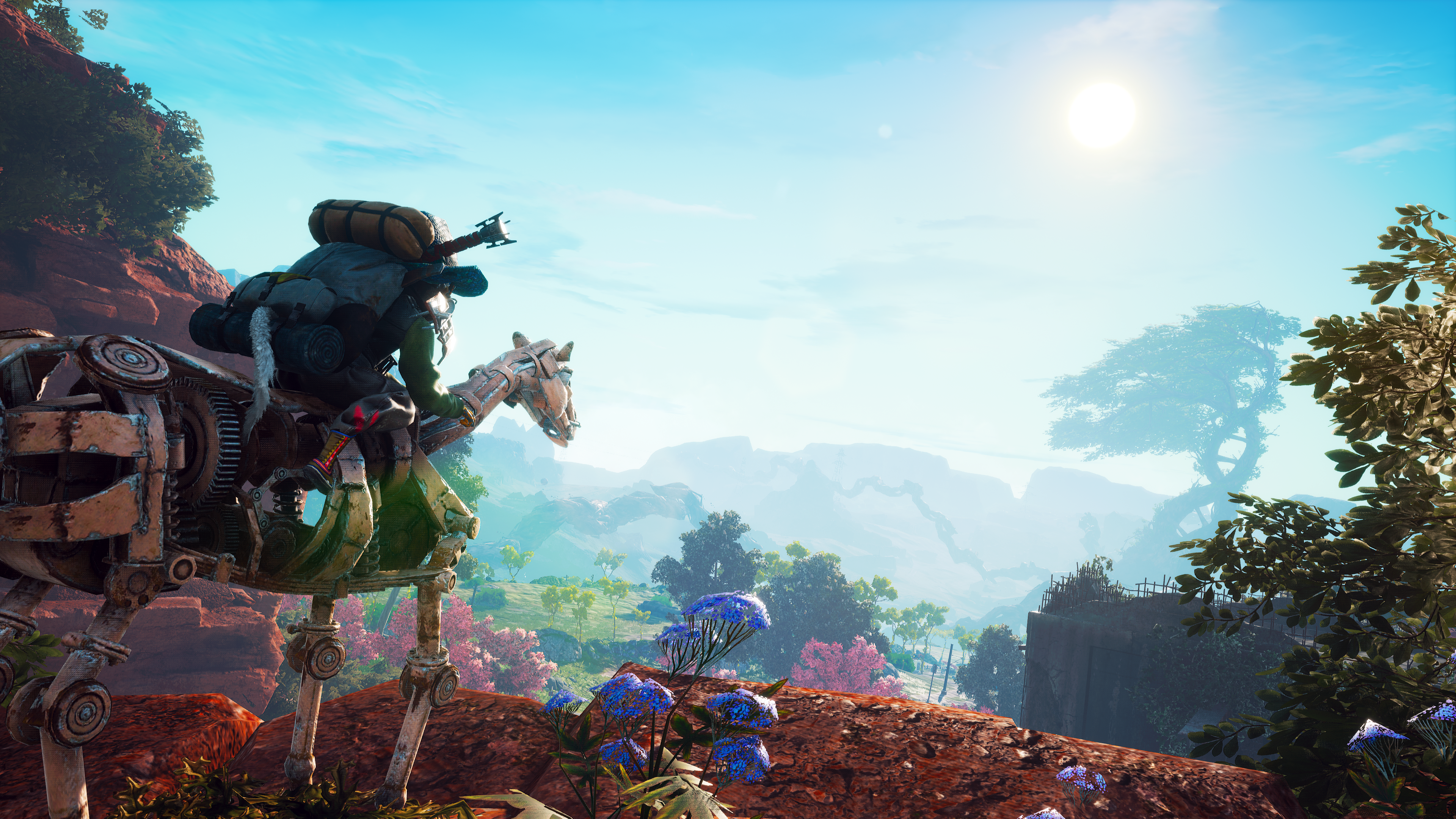 Biomutant’s biggest strength is how it combines several components to modest success. Sure, the game is unique and it has a ton of potential, but the game’s bogged down by tedious sidequests and some inconsistent systems. Combat is fun but it lacks a coherent targeting system and many of the bosses feel cut and paste. Biomutant is an ambitious title but it lacks a coherent path to completion, and while it takes risks, some don’t pay off in the end. There’s a brilliant foundation to be found and a sequel may likely fix the issues you’ll encounter.