Review: Back to the Future Level Pack – LEGO Dimensions What makes LEGO Dimensions so awesome, is the fact that everyone’s favourite beloved characters, and their respective worlds, come together in one game… and EVERYTHING is made of LEGO! I love the fact I can play as LEGO Gandalf and drive around on the Batmobile in a Portal themed level! The possibilities are almost endless, and the more characters you obtain, the more worlds and missions you can unlock! And that’s part of why I was SO excited to try out the Back to the Future Level Pack! It also just so happens to be the 30th anniversary of the first Back to the Future film, and this past Thursday (October 22nd, 2015) we celebrated Back to the Future Day, which happens to be the exact day that Marty and Doc Brown time travel to, in Back to the Future 2!

The Back to the Future Level Pack comes with a Marty McFly figure (equipped with an adorable, little red guitar), a DeLorean Time Machine, and Marty’s signature Hoverboard. Players get to play an introduction chapter when they start the level; Marty arrives at Doc’s house, and he is not there, so he decides to clean up a bit (by that, I mean smash everything), and build an amp with all the remaining LEGO pieces. Marty also has a special ability where he can use his guitar to play a loud rift, which then creates a sonic boom, that can smash glass. He uses this to break stuff within the level, and on top of that, players are given the opportunity to build and ride the Hoverboard. He finally gets a call from Doc, and is asked to meet him at the mall, but once he gets there (and this may sound familiar, movie fans), villains show up and shoot Doc (since its technically a kids game, he gets hit with a baseball instead; its really quite hilarious, actually). Marty has to go back in time to 1955 to save Doc, but can he do it without revealing too much to past Doc?! In the end, Doc is saved and uses a catcher’s mitt to catch the baseball that is thrown his way. It was a cute little story (maybe took me about half an hour to do), and it really got me excited for what was next! However, once I was done the chapter, I was taken to a hub, the 1985 world of Back to the Future, and through there, I thought I would have to find a point on the map to locate the next chapter. The more I walked around, I realized there was only one chapter, and the rest was just little mini missions here and there (and TONS of things to do that could only be unlocked using a Cyberman or the Twelfth Doctor minifigure)!

Using the DeLorean, players can time travel to the past Hill Valley (1885) and the future version of Hill Valley (2015). Each area has a variety of mini missions, that players can start by talking to the select residents. Once again, I could start some of these missions, but I found most of them required the Cyberman or the Twelfth Doctor character, in order to complete them. As disappointed as I was with the lack of usable content, I had a blast playing it with two of my buddies. It was amusing watching them trying to race each other as Marty and Chell (the Portal 2 Level Pack) on the DeLorean and the Batmobile, and the main chapter was a lot of fun to play using two people. At the end of the day, it IS a LEGO title, so you know it won’t disappoint in creativity, fun, and in humor!

The Back to the Future Level Pack is available now for $29.99!

For more information, you can check out our review of the LEGO Dimensions Starter Pack here!

Back to the Future LEGO Pack 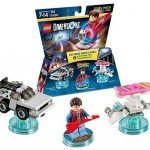 I’ll Have A Fallout Beer…?