Back 4 Blood is a rude zombie-killing experience with a bad attitude.

It’s also a game that I’m hopelessly, hopelessly in love with. You could even go so far as to say I am a zombie in its alluring pull.

WB Games’ gain where Valve’s characteristic failure to release anything that is a proper third instalment is concerned.

It appears that everybody but KFC Gaming‘s Twitter account knows the history of Back 4 Blood’s development. You know, unless KFC Gaming is doing this for the free press. In which case, good job!

Basically,  the Lake Forrest, California-based Turtle Rock Studios has a history of building out some of the best multiplayer experiences for Valve IPs. A decade ago, the two companies split. And ever since then, Turtle Rock Studios has had a bit of adolescence that flirted with other large IPs and lots of ideas in the VR space. But in 2020, the studio took to The Game Awards to announce they were going back to their roots with a spiritual successor to Left 4 Dead that’s supported by WB Games, and primarily differentiated in the few terms for zombies and other in-game elements they couldn’t get the rights to.

Back 4 Blood Has Change on the Brain

However, one thing Back 4 Blood really changes to its benefit is its sense of unity. There’s a greater sense of teamwork that comes from the Cleaners’ new individual abilities and the decks of ability cards the game grants its players. 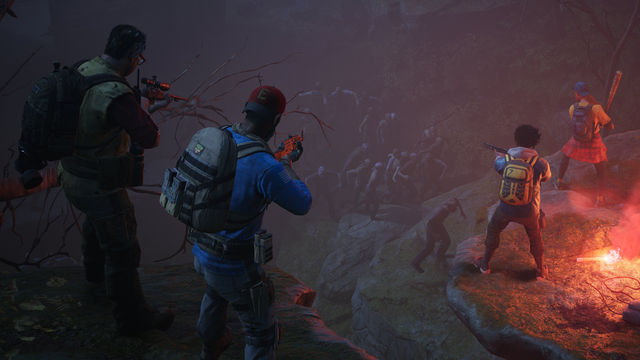 Cleaners’ skills and cards can have unique effects like clearing Fog of War, improving aiming times and stamina pools, and granting extra resources to carry or copper(currency used in-game) to spend for the individual or the team. While skills remain permanently tied to a specific cleaner, cards are found during campaign maps or bought with points. Each round, you will receive a new set of cards.

Honestly, cards are going to be a hit or a miss. I’m sure many of you are going to love the ability the afford Turtle Rock Games to keep things fresh and new with each playthrough. I also imagine that they will make for easy nerfs and buffs in the future and in esports play should we get to that point. For players who like to think on their feet and fuss over seemingly endless levels of personalization, there’s so much to love about the card system. 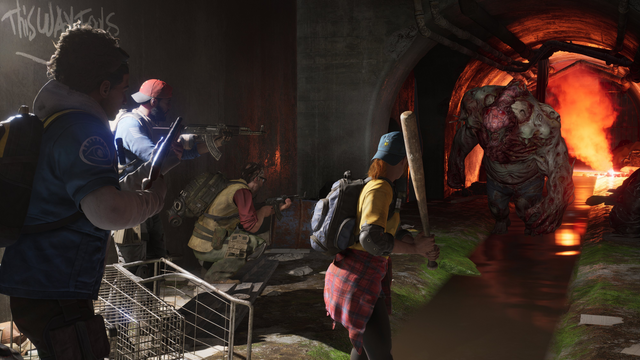 I imagine there will also be a lot of you who don’t have the patience for deck-building, and that’s totally fine!

In my own experience so far, I’ve felt myself prioritizing cards that contribute to a tank build, so things like added health and lives and increased armour. My physical disability can often mean that I am slow or imprecise to act, which feels extremely taxing in this game. So my priority is making sure I stay up for my team rather than boosting my own stopping powers — and theirs’, unfortunately.

Go ahead, use my weakness

The second major change is the inclusion of points of weakness on all mutated (named) zombies. These weaknesses show up as sort of amorphous boils and blemishes on creatures that glow a dull yellow. Depending on what type of weapon and ammo you are using, shooting these results in a quarter to half of their health evaporating. It’s great for teaming up with your fellow Cleaners effectively and for showing off, but unless you are facing one of the few truly bullet-sponge bosses, it can make things feel uneventful at times.

However, Turtle Rock Studios does throw a lot of zombies at you at any given moment, so this also can be a light in times of darkness… a dull, kind of gross yellow light. Mutants should probably get those looked at. They can’t be healthy!

The solo-player tax associated with Back 4 Blood is too damn high!

By now, you know that Turtle Rock Studios is addressing the poorly-received progression nerfs caused by the decision to play solo. It looks like now that the game is released, the studio will be going as far as hiring new people to make sure that people don’t miss out on simply playing alone.

Back 4 Blood is also a co-op experience that is at its best when it’s played with people you actually know. It’s quite disappointing that there’s no incentive here to get along with others. For example, this is something Ubisoft struggled with within The Division. It’s a franchise that’s possibly one of the most expensive solo-player experiences. Ubisoft, of course, has padded this out with the Sheppard System.

Back 4 Blood would really benefit from a similar system, perhaps tied to the Card System. Playing with random people solo is a maddening experience where you’ll often find a lack of mics and, thus, a lack of any synergy.

Opting for having bots fill out your team is a buggy experience where they really don’t kill anything. Rather, they get stuck, get downed and require assistance. The only thing they are really good for is healing you up and the occasional assistance in completing mission elements like freeing captive NPCs or boarding up windows.

Surprisingly, PvP is Back 4 Blood’s worst element so far. Now, I stress that joining friends in playing the campaign is endless hours of fun with amazing amounts of replayability and experimentation. But the game’s best-of-three Swarm survival mode feels chaotic and claustrophobic.

Your progression in Campaign doesn’t carry over, so getting into PvP, to begin with, feels scary and uninviting. And unless you are with a group of highly communitive friends, you’ll feel like you’re on your own versus the Horde.

The maps are also just smaller, tighter versions of the Campaign’s maps. Only in PvP, they feel as though they lack real tactical advantages and permit the Horde to spawn in places that seemingly make no sense.

I feel like Back 4 Blood‘s PvP would benefit greatly from having brains wired for esports focusing on it. Give us great areas to put a sniper. Allow us to have friends focus on killing at a distance while others kill closely.

Until then, PvP is a hard avoid for me.

As a sort of Left 4 Dead 3, Back 4 Blood is an honest and enjoyable experience. It is still a little buggy and is likely to benefit from a little time and feedback from the community. Having a PvP mode that you want to outrun is a little bit of a disappointment, and the Card System isn’t going to be for everyone. I’m already a little daunted by the amount of attention building deck requires. Perhaps I need to just start spread-sheeting my builds? However, even after all this, there’s no denying that this is one hell of a fun time to spend with a good friend or two.