As you grow up, you begin to learn that life is simply about sorting out your priorities. What makes me different from everybody else? Why should anyone care about me? Where will I live? Why do I want to live there? and most importantly, am I willing to die in order to answer those questions.

OK, so maybe your normal, everyday life isn’t exactly like that, but it certainly is for the 333rd Demi-gods in Artisan Studios’ sophomore 2D RPG, Astria Ascending. I am enjoying this game more than anything else I’ve experienced this year. I was worried it was going to be a cellphone quality RPG meets Octopath Traveller.

The story here is simple and yet convolutedly complicated at the same time. Five cities inhabited by five distinct races have come together to embrace harmony in their pseudo-capital city of Harmonia. A resource called Harmelon is grown in orchards by a sort of worker-class being. Demi-gods personally selected by the Goddess of Harmonia are granted Zodiac Powers — great elemental abilities that make them the fiercest of warriors. But the price of the Demi-gods’ Zodiac Powers is ascension, otherwise known as death, at the end of a three-year period. To make up for this, Demi-gods are treated like gods for three years — afforded a life of luxury and prestige. And their families are taken care of.

The eight Demi-Gods of the 333rd are at the two years and nine months stage of their ascension period when vile monsters known as the Noises begin to disrupt the harmony of the land. The 333rd must embark upon a quest across the various lands and tribes in order to restore order, but also to learn about themselves and challenge their fate. There’s been a thousand years’ worth of Demi-gods, but none of the previous Demi-gods have received the amount of power that our party has. They’re sent on a mission across the lands of Orcanon to collect 12 emblems left by those with higher powers to save the world. 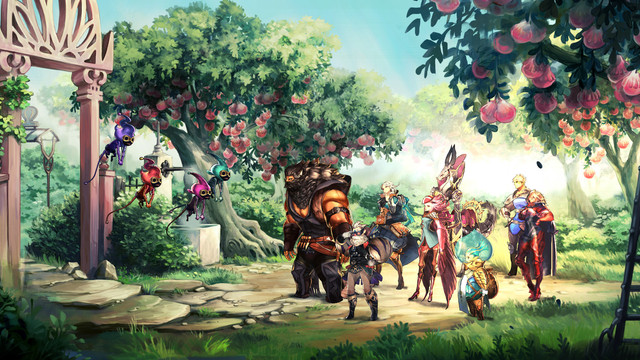 Astia Ascending’s story, at times, can be hard to follow as it carries that endearing vagueness so often found in JRPG’s. Its dialogue and characters are also quite stilted at times, which can be off-putting. But this is an experience where the story sort of takes the backseat. I’ve found this to be quite interesting as the game is written by Kazushige Nojima of Final Fantasy VII and Crisis Core: Final Fantasy VII fame.

Another thing that I don’t know how to feel about is your party. In most games, there’s a general sense of camaraderie, where you might not agree on every topic but will go to bat for your fellow teammate. Not so after spending time with the party in Astria Ascending. Your party is constantly bickering and some teammates are often annoying, impatient, or insufferable. 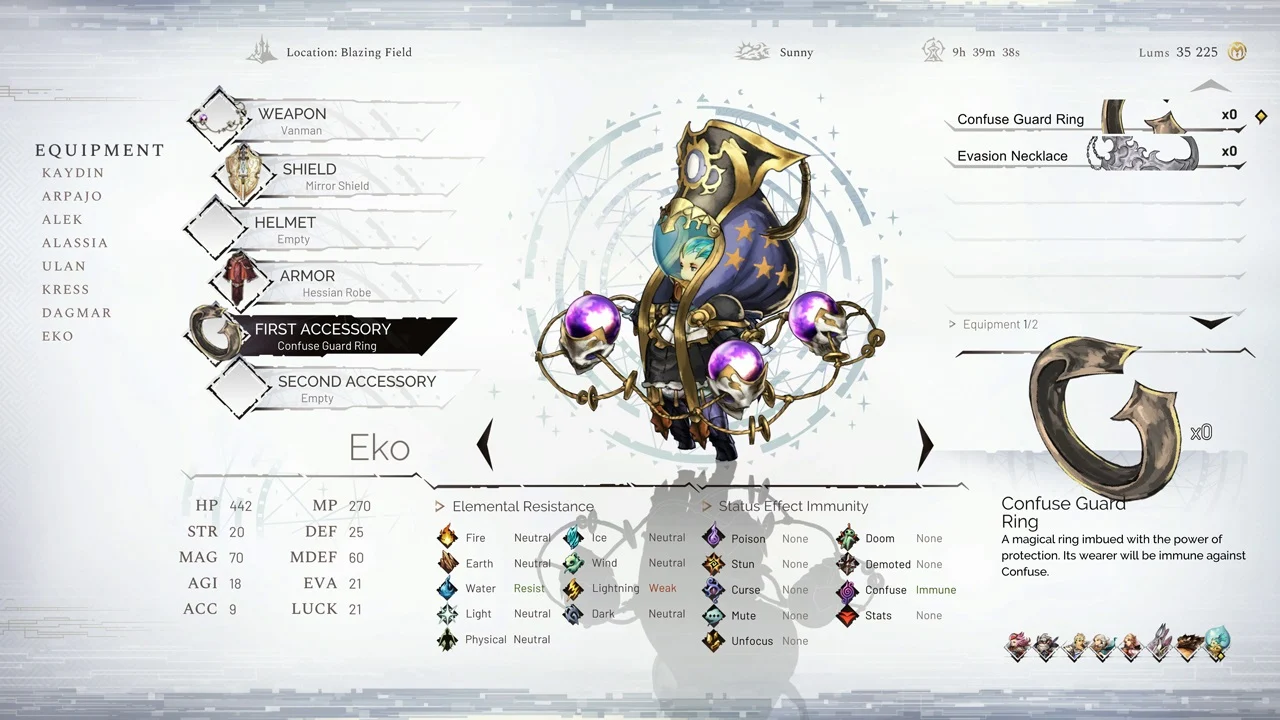 By dropping all eight characters at once at the start of the journey, things tend to get left behind. What I mean is that most JRPGs dole out party members at intervals, giving each member a moment in the spotlight before allowing us to follow their story. In Astria Ascending, you’re given eight Demi-gods at the start before having to revisit each hometown to learn more about them. If this is a change more games plan on doing in the future, I’m not sure it’s one I want to see as it leaves very little room to learn to care for the cast.

All this goes without even mentioning the subpar dub, one that is so painfully devoid of life it’s hard to listen to. In what feels like forever, this is the first game I’ve played where the English voice acting is so dull, so painfully dry that I swapped back to the Japanese voices. Whether or not the final presentation is a victim of home-recording lines due to Covid is hard to tell but this is a rare instance where the dub fails to keep me invested. 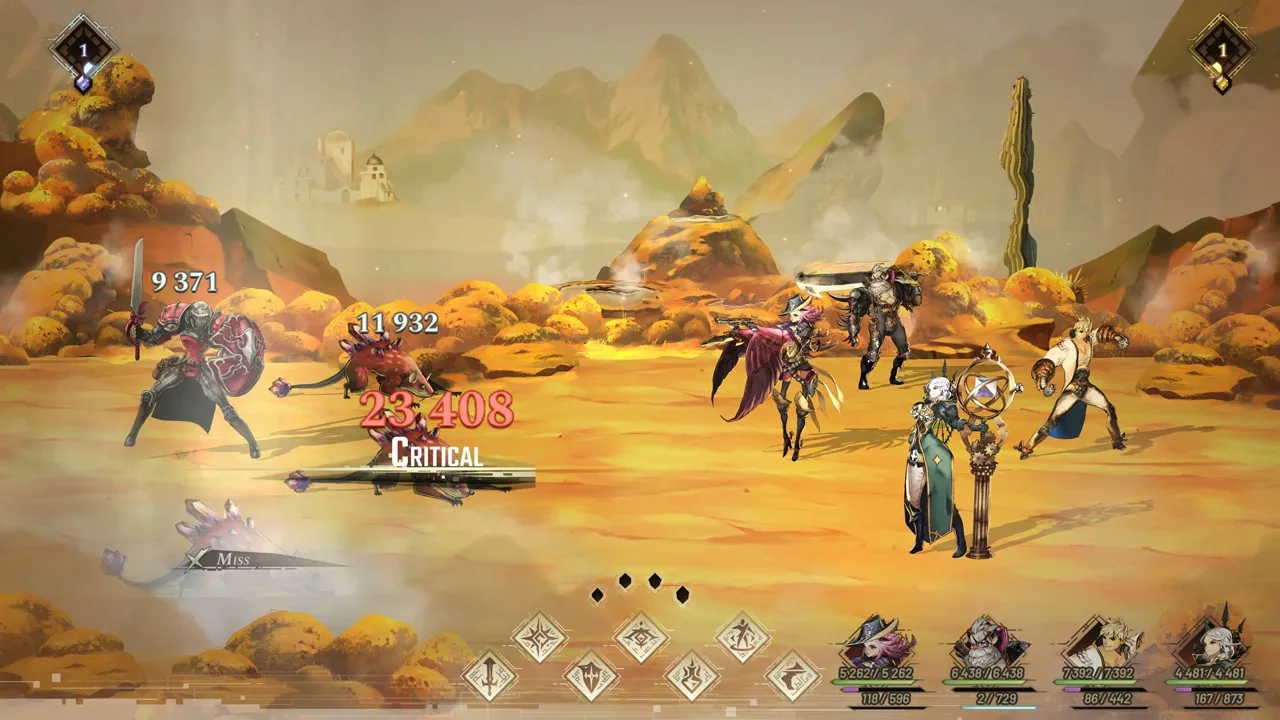 I can’t say that the world of Orcanon is ugly. Artisan Studio does an amazing job of adding colour and depth with their hand-drawn models brought to life with top-down animation practices first used by Walt Disney in the ’50s.

I have two complaints regarding the game’s visuals. First, the 2.5D character models set atop a flat background have some rough motions, particularly in their necks. Heads and hands move in ways that can be a little jarring. However, when not in motion, the models’ details so off their incredible colour and linework. 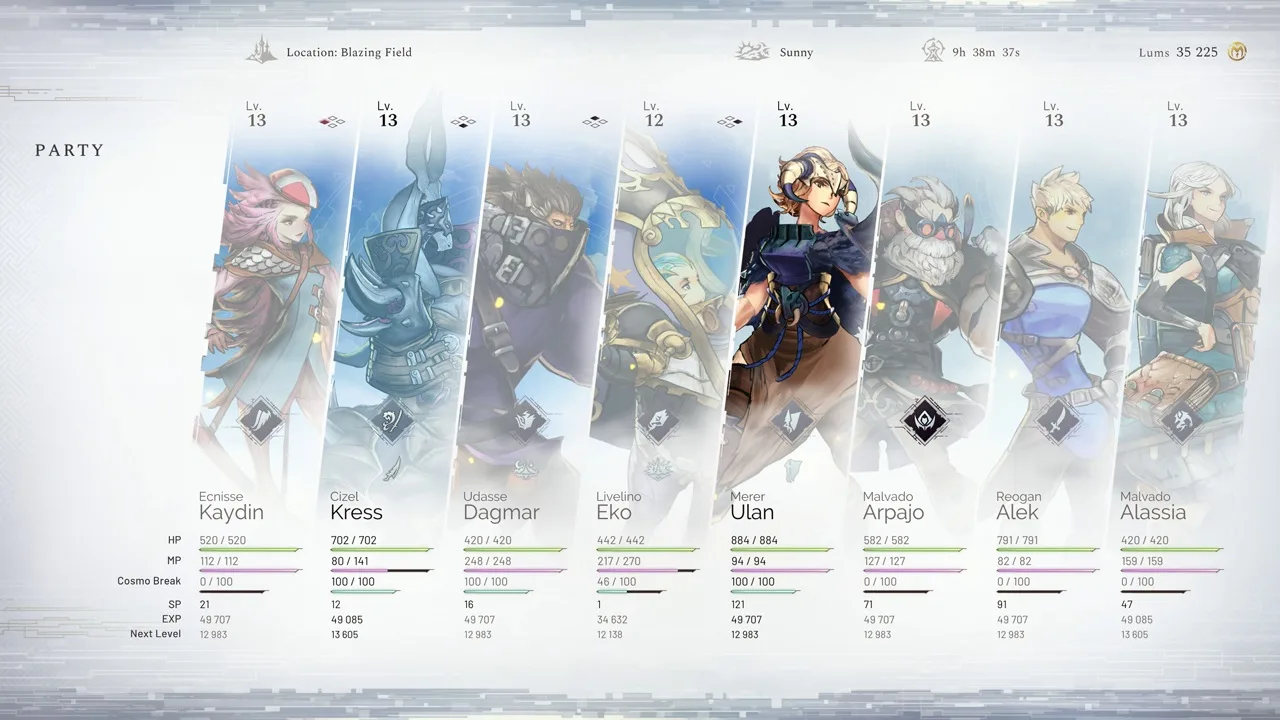 The second thing that bothers me is that there’s almost a lack of character models at times. Enemies and bosses in dungeons are incredibly diverse. But once you get to a town, that all changes. Towns are pretty starkly populated, but the people who call them home are often the same looking with one differing detail. Such as the Harmonia items merchant is the town guard with a French mustache. It’s an incredibly deep reach that upsets me so much, but it is removing some of my feelings that this is a diverse world inhabited by a wide variety of people. 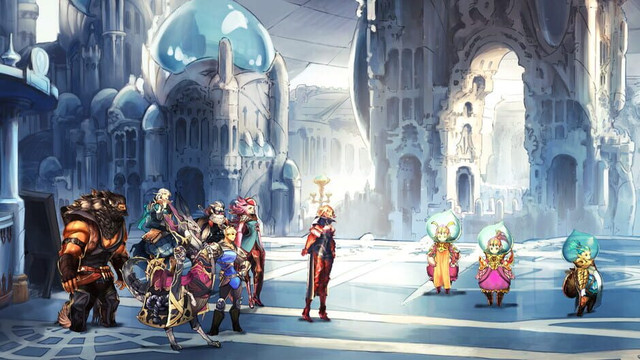 One thing that leaves a lot to be desired is the map system used. In short, it stinks and entirely breaks the flow of the game leaving you to guess where to go next. In some instances, you’re given a bone and told what needs to be done but the map is essentially useless and overly complicated. Good luck trying to use the map when trying to complete a dungeon, and if you do end up getting the map to help, it quickly bites you in the ass in later dungeons where things get confusing, fast.

Chose your own combat

Where Astria Ascending is at its best is in combat. Its turn-based combat system allows you to take control of all eight Demi-gods right away, bringing your top four into the start of a fight. You’ll be able to prioritize Ulan’s agro-taking tanking. Or Dagmar’s strong elemental Zodiac Powers. If raw tanking isn’t working for you, easily switch to a reserved party member on the fly and change things up.

Battle plays out in a rhythmic pattern of being a step ahead of your opponent. Albeit it’s hard to tell at times if you are ahead because there’s no turn bar present. 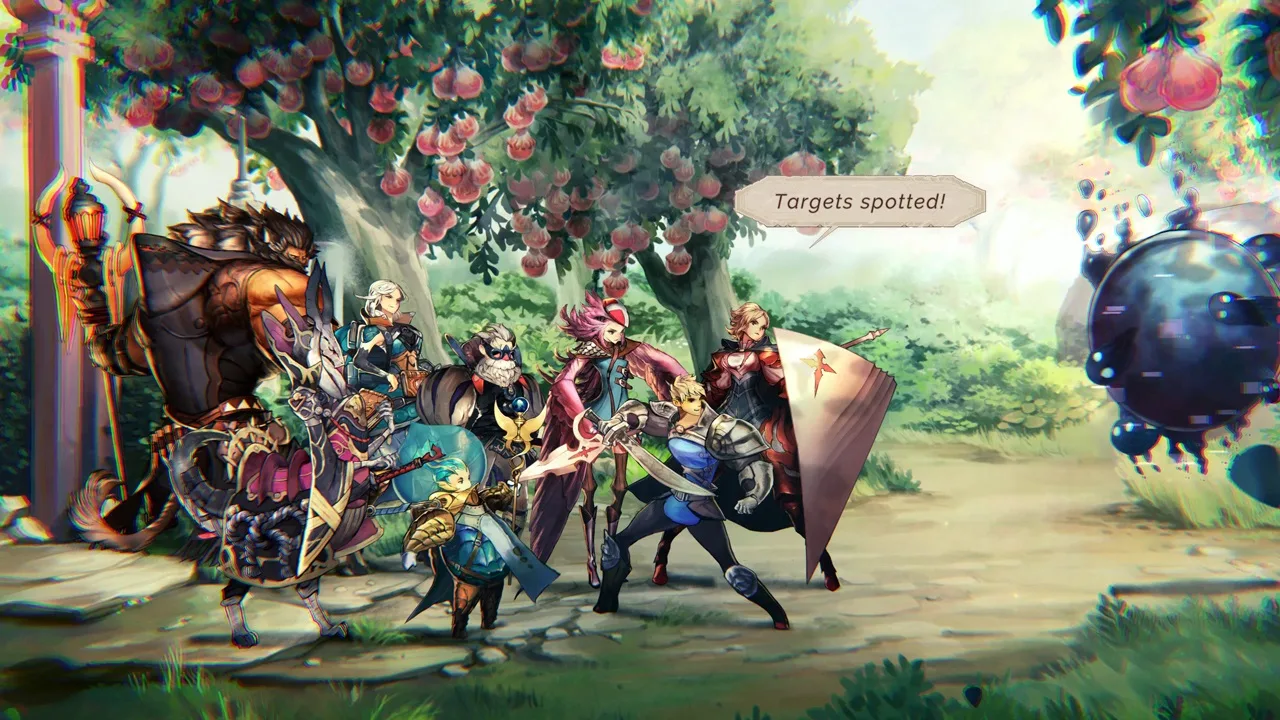 Your standard attack, items, guard, and flee are all here. But there’s also the addition of the Focus Point — a strong damage multiplier of between 50% and 200% that is banked up by skipping turns with your characters or exploiting enemy weaknesses. Generating Focus Points can be a huge hassle, but they can also be the very thing that keeps you from killing your own party members when you use them to buff a lightning spell that a giant scuba diver boss is weak against before he gets the chance to confuse your entire party and blank them out.

Combat takes place entirely in dungeons spread out across the various lands, with enemies respawning each time you leave, unless you turn that function off, but more on that later. Health is replaced at the end of a battle, but MP only comes back on its own when you are inside a designated city area. I’m quite enjoying how this makes the very obvious grind feel like not a grind at all. Battles involve randomly generated fields of foes pulled from a grouping of possible encounters depending on the dungeon you are in. However, a great deal of grinding is removed by the fact that an area with three encounters will only ever have three encounters. There’s also an input that allows you to paralyze a moving encounter briefly so that you can jump over it and avoid it. 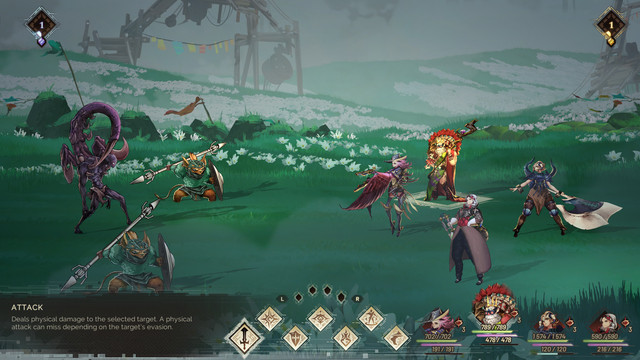 For those who like to play around with every inch of a JRPG skill tree, Astria Ascending more than delivers as it provides a number of different job classes for each part member that each feature a unique skill tree with seemingly endless customization. Many points on the tree offer you a single choice between multiple stat buffs. For example, I really found myself worrying about how I prioritized my caster. Should I buff him up with ten more HP so he can survive to cast a spell, or do I instead give him ten extra MP so that he can cast another spell? Do I want my thief to have better luck or a better shot at a critical hit? I don’t know what to say aside from the fact that these trees are sure to grow on you.

Combat in Astria Ascending will challenge you. A single mistake could cost you a game over. Using Focus Points properly may be the answer to not spending a couple of hours grinding. The point is, there’s a system here that is rewarding for JRPG junkies. As well as a modifier that’s kind to those newer to the genre.

Being kind to those less experienced is another place where Astria Ascending… well, it comes out on top in terms of giving you choices to make the experience fit your level of experience. 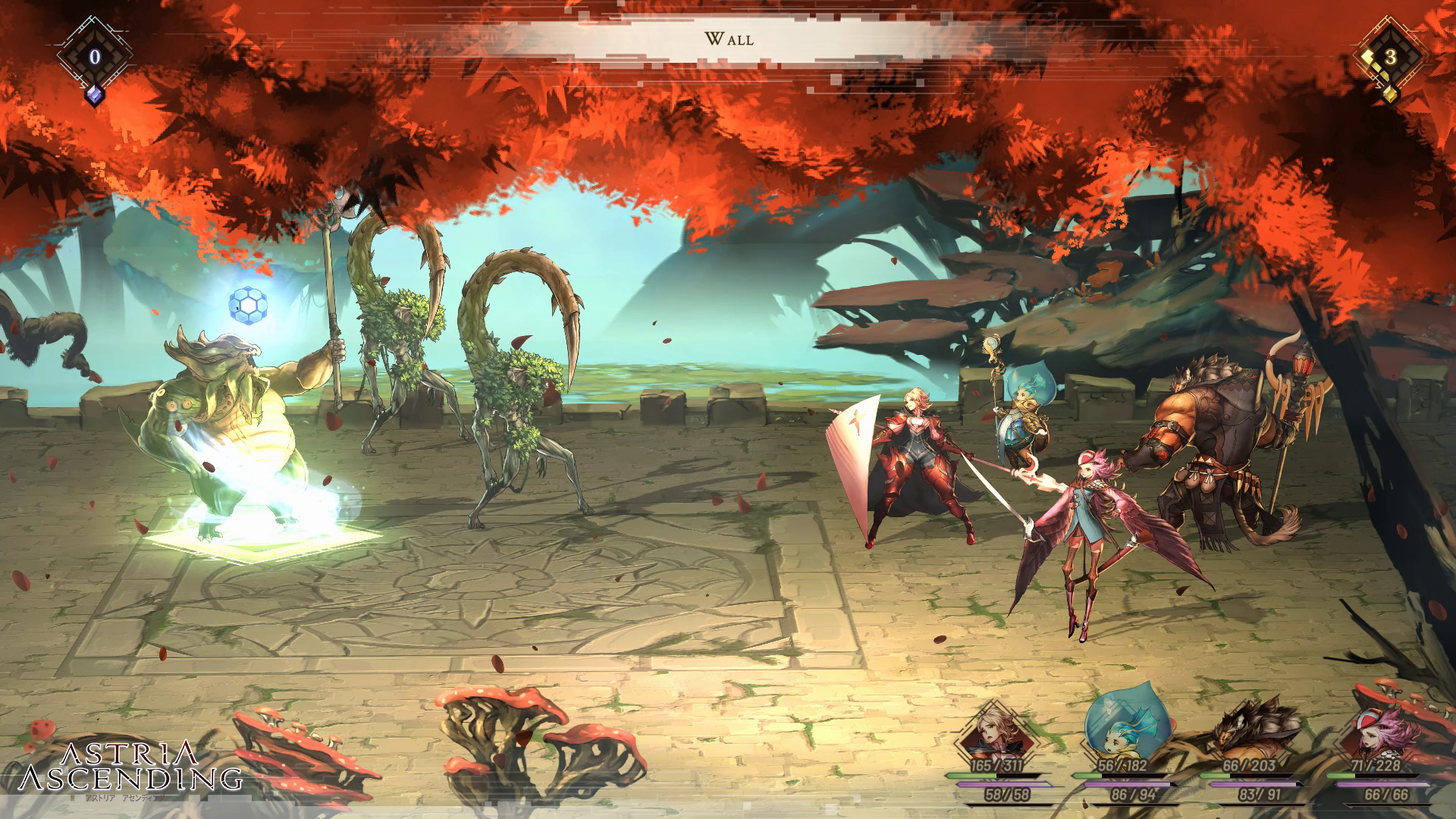 The menu offers you the ability to display indicators like where a boss is and where quests are or not. It allows you to turn off money and item gain and even lower the XP for those characters outside of your battle party get to make it an even harder experience. You can also just straight-up make the combat harder by giving enemies and bosses more health and damage.

My only complaint with this wealth of customization is that menu choices are a simple “yes” or “no” option with no explanation of what happens if you make changes. Most of it seems pretty self-explanatory, but I had occasions playing with the options where I felt as though I marred my experience by tripping different options. 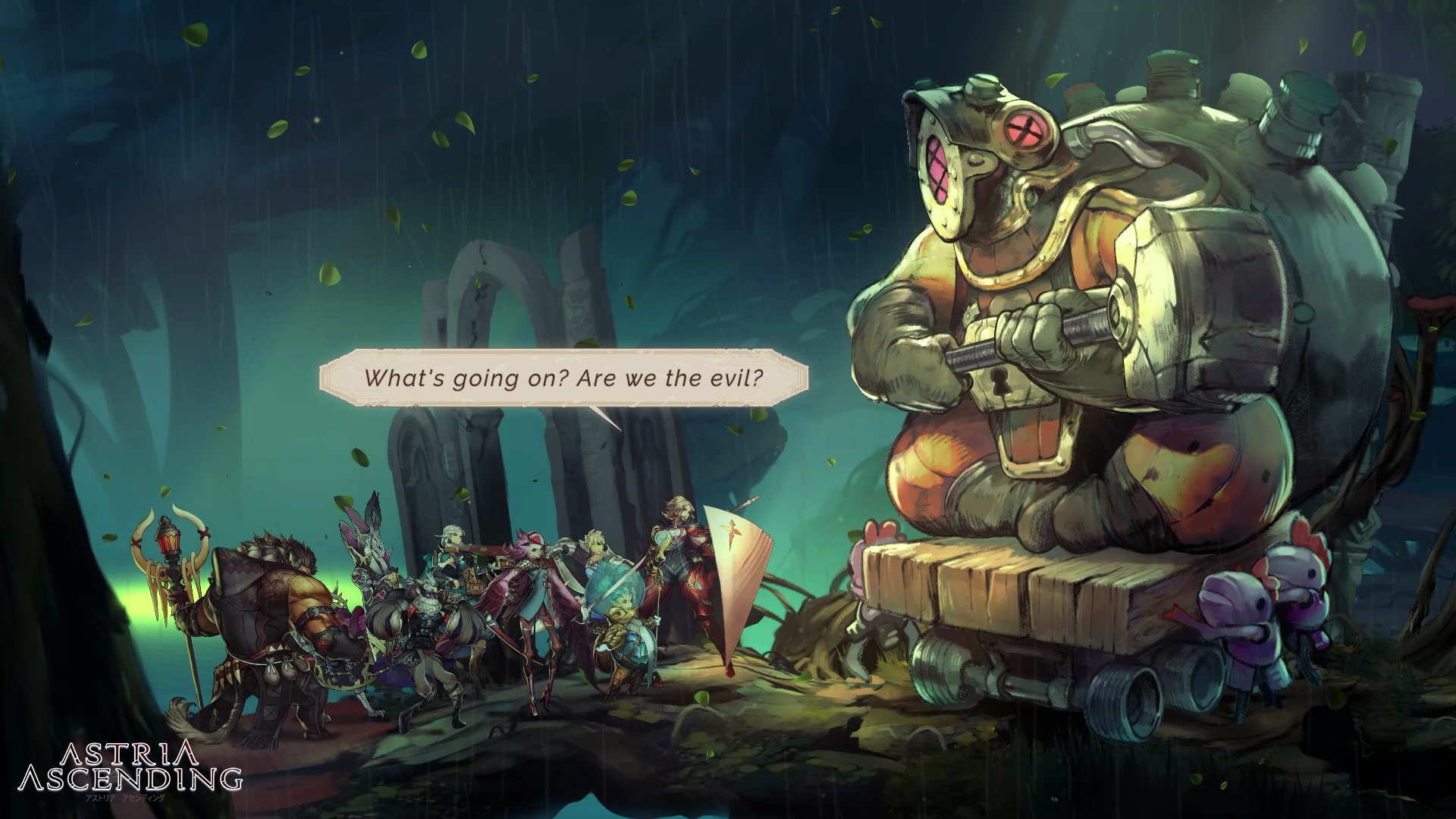 Despite not living up to the full potential the development team is known for, Astria Ascending has a lot going for it. It is a flawed gem that has its moments but the uneven story and cast do little to elevate the experience. Combat on the other hand is a highlight and the aesthetic is wildly charming while the other elements do little to elevate the overall package.