When you perceive a real threat, how will you react?

Will you charge at it head-first, weapon drawn?

Will you use diplomacy, logic and compassion?

Or will you sink into the shadows, choosing to observe from a distance and hoping that you don’t miss out?

It’s the sort of active condominium Ashwalkers: A Survival Story attempts to engage you through its short and sparse Unity-created playthrough. For the most part, it works. I’ve found my one playthrough so far to be engaging and exciting enough. I’ll likely give it a few more goes.

The pursuit of personality

Ashwalkers: A Survival Story plays itself as a sort of logic and personality simulator. You play all four members of a specialized team of adventurers set forth from The Citadel – a domed bastion of human existence that is collapsing in on itself. Your team represents the hopes of survival for 250,000 people as you offer to traverse a chaotic ash-soaked landscape to find the Dome of Domes – a legendary utopia of safety that could last forever.

Your team is selected based upon their unique personality traits: Petra the logical, Sinh the warrior, Kali the scholar and Nadir the stealthy shadow. There’s a lot here to either find or miss as the game contains 34 possible endings based on how you conduct your expedition. And with each playthrough falling somewhere between an hour to two hours at most.

An adventure will start in the way of Hellblade: Senua’s Sacrifice in that the game will place a foreboding sense of need for protectionism on you as it informs that you must venture forth to find the beacons that will lead you to the Dome of Domes. Along the way, you will be responsible for keeping at least two of your squad members alive. If you fail, you not only lose the squad but the 250,000 souls in The Citadel. Yet, this is where my first criticism of Ashwalkers: A Survival Story comes to play: there just isn’t enough of a fear of loss. 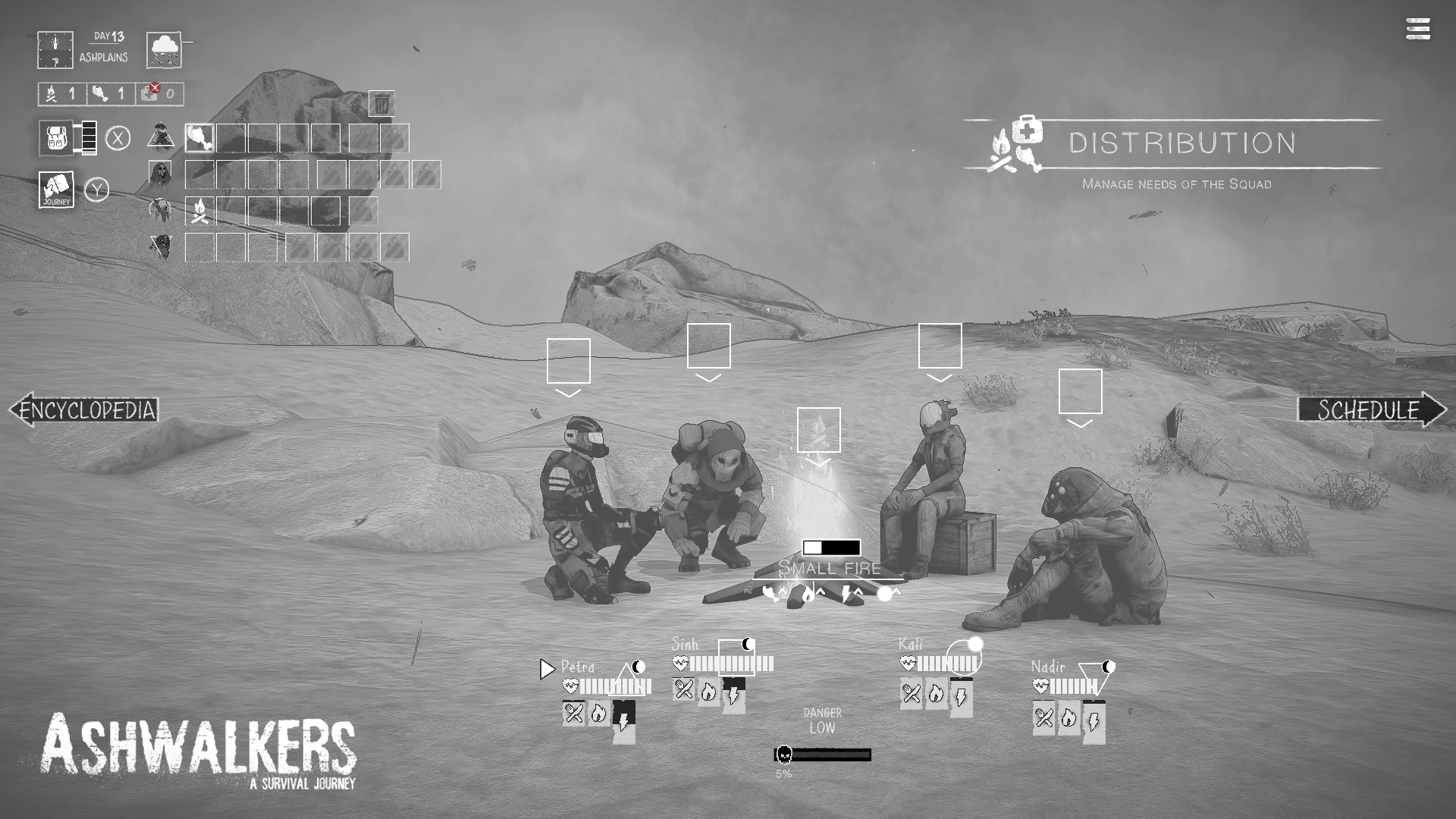 Should you be able to pick up the game’s unchanging resource mechanic and discussion-making process, it’s unlikely that you’ll lose a squad member. On my playthrough, I opted to use Kali’s diplomacy tactics and gave freely of myself and my resources every chance that I could. And the few times I found myself with my back against the wall, Sinh was always there to save me from my mistakes. This quickly made me feel as though I was in very little real danger.

Another aspect of where Ashwalkers: A Survival Story misses its mark is in making you feel accountable to the folks you’ve left behind. Savages of the lands of ash you meet along the way don’t really come back until you’re at the concluding arch of the story, so I feel as though it’s hard for me to truly care about the souls I’ve met along the way. There are a few occasions where a radio operator for The Citadel will reach out to you looking for updates on your journey as well as inspiration for the settlement’s continued ability to… well, continue living. However, these exchanges are quick and only really serve as a nerf or a buff to your party’s resolve statistic. It hardly appears to change much, which leads me nicely to my next criticism: change.

An adventure in things staying the same

Ashwalkers: A Survival Story very much plays things out as a tightly scripted narrative adventure akin to the greats of point-and-click action adventures. But the overall experience plays out as an unchanging story that can become a bit of a slog.

I’ve previously touched on the game’s resource and decision-making mechanics, but I’ll flesh them out more here.

Resources consist of only three types: food, wood for fires and medicine for wounds. They are all found seemingly randomly dotted throughout the long hallways you’ll traverse on your adventure. I often found that I had too many of each and only really felt pressured by a lack of them when I was caught in a snowstorm with no wood to build a fire and no medicine to heal my wounds. Dispersal of resources happens around a campfire. Each campfire serves as an ability to regroup. You can warm your team back up by building a fire, administer food and healing and have them rest to regain strength, chat around the fire to restore resolve, or forage for more supplies. There is a growing danger counter that grows the more times you camp and the larger you build your fires. It also increases based on the number of party members you have sleeping or exploring, so you’ll have to have a member or two assigned to the watch to lower that.

The problem is that there are no mechanics added to adventuring, collecting or camping. You simply walk down black and gray hallways of little visual change to get from point a to point b and through the various encounters with decisions. I would love for something like a need to stop and purify water or new resources thrown in along the way to throw a curveball. The sparse landscapes, character models and sound design are other unchanging aspects that may remove you from the action. Character models for savages and beasts appear as frankly ugly shadows that are far too overused. Set pieces along the hallways rarely change and have very little overall depth. And finally, there really is no sound design present, so this is a game where you are none the worse for playing without sound.

Be the best at one thing

While I’m critical of Ashwalkers: A Survival Story, I want to reiterate that I’m finding it an experience worth the price of admission and the time you’re going to put into it. Simply put, it excels at what it aims to do best: tell a story based on your personality and choices. During my first playthrough, I opted for diplomacy and compassion. And while avoiding conflict got me to the Dome of Domes with very little blood on my hands, I ended up getting an ending where a significant amount of current Dome of Domes residents, savages and members of The Citadel lost their lives. This immense amount of death came as a result of the collapse of our newly formed democracy. Ironically, the crash forced me to use aggression and bloodshed to get things back in line – the irony that still unsettles me. 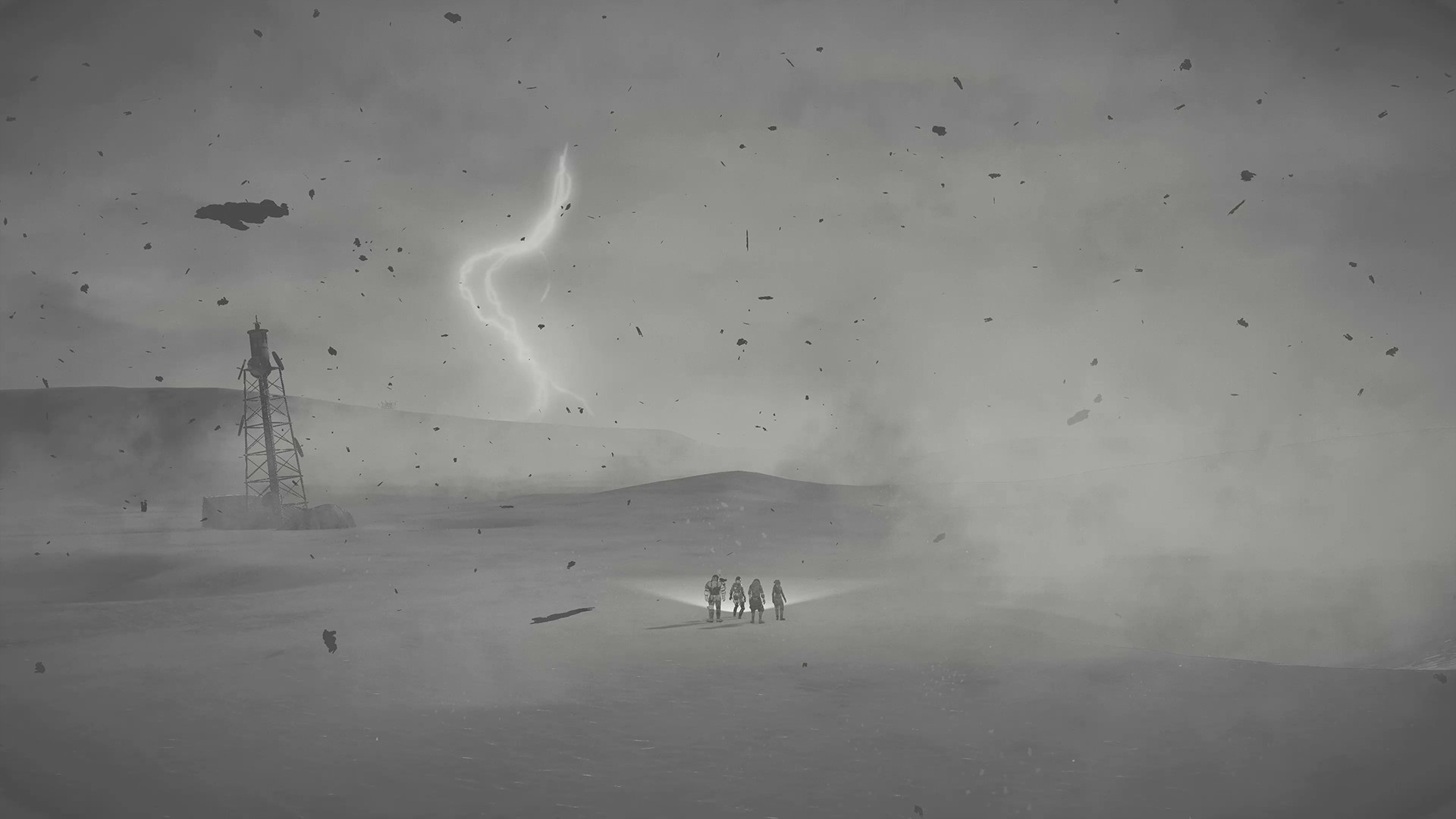 I also like that there is very little information to follow here during your adventure. You’ll come across different scenarios and objects in your experiences to take up residence in a journal where they’ll inform your various playthroughs. I like that this offers me the ability to take things at my speed. So far, I’ve only opened the journal to see how I can utilize it, so I plan to put in some time to study what I collected on my first run to inform my runs in the future. I find this to be one example of where sparsity keeps things interesting.

Both of these points offer an understanding and renewed interest that are likely to give Ashwalkers: A Survival Story repeatability that I will use. I can’t say I’m going to give it enough attempts to collect all 34 possible endings. It’s a game likely destined to gain a fine layer of digital dust in my Steam library until I reinstall it from time to time as an escape from more demanding titles.

While sparse and unchanging, Ashwalkers: A Survival Story is an enticing Unity-built offering that is short enough to be easily digestible as a single-sitting survival simulator or a plat-cleaner you’ll come back to again and again when looking for a simple reset.