Have you ever gone back and played a game from a bygone era? A game that you remember so vividly and fondling that you look past its flaws even though they’re in plain view. Specifically 64-bit 3D platformers like Donkey Kong Country 64, Banjo-Tooie or even Conker. Now try to imagine playing a game that tries to replicate that type of game, be it from the gameplay, art direction, the same flaws or even an overall feel of a game. Well Anodyne 2: Return to Dust made me feel that way during my time playing it.

Now I will mention that I never played the first Anodyne game nor do I plan to after my negative experience with its sequel. Anodyne 2: Return to Dust feels like a very bland game that left me bored by its 3D gameplay, characters and “story”. I’m using that term very broadly as the game made me want to skip the unnecessary amount of text that went through the world’s exposition.

A 3D Adventure Inspired by Past Nintendo 64/PS1 Games

The way it doesn’t take modern game design lessons to make a better version of a game from a bygone era is downright confusing. Other games that capture the retro style of a developer’s fondness for a game in the 8-bit, 16-bit, 32-bit and now the 64-bit era of gaming have alfways attempt to fix the problems with those games. That trend is something I could not find in Anodyne 2? It feels like that was a very intentional choice right out of the gate like in a ‘we think it’s so bad it’s good’ kind of way. All I see is bad from that design choice.

That isn’t my only problem with the game, I had a real problem with connecting with the game. When the game started it just felt like I was dropped into a game with the perceived notion of knowing what was going on. I know the game is a sequel but there is too much going on and not a lot of explanation of the world, who I am playing as and so much more.

It also doesn’t help the story is complete nonsense, it feels like I’m experiencing fanfiction in video game form. For a lot of the game I just zoned out whenever a lot of text came on screen to focus on the story, I was bored by it. The visuals and character designs were another part of the game I could not stand, I know the visual choice was on purpose but that style has aged like milk; it doesn’t hold up like 8-bit to 32-bit games. It’s no wonder why Nintendo never released a Nintendo 64 classic, these games just don’t hold up anymore.

Anodyne 2: Return to Dust is the sequel to Anodyne, which launched in 2013, a unique 2D Legend of Zelda-lite game developed by the duo, Melos Han-Tani and Marina Kittaka. The sequel came first to PC in 2019 and recently to consoles not too long ago, the duo went big by making the game playable in 3D with 2D playable sections. The game puts you in the shoes of the game’s heroine, Nova awakens and finds herself on a mostly deserted island, this is where the game starts. Nova is a nano cleaner from New Thealand, which has been plagued by nano dust, something that Nova is required to collect. Nano dust can infest an individual and corrupt their perception of reality and desires.

As a nano cleaner, Nova can cure an infested character, the first step is to aiming Nova’s energy blast at them doing this will fill up a bar. This allows Nova to go through the motions of entering a person’s mind and yes that is exactly like Psychonauts, which immediately came to mind while I was playing. 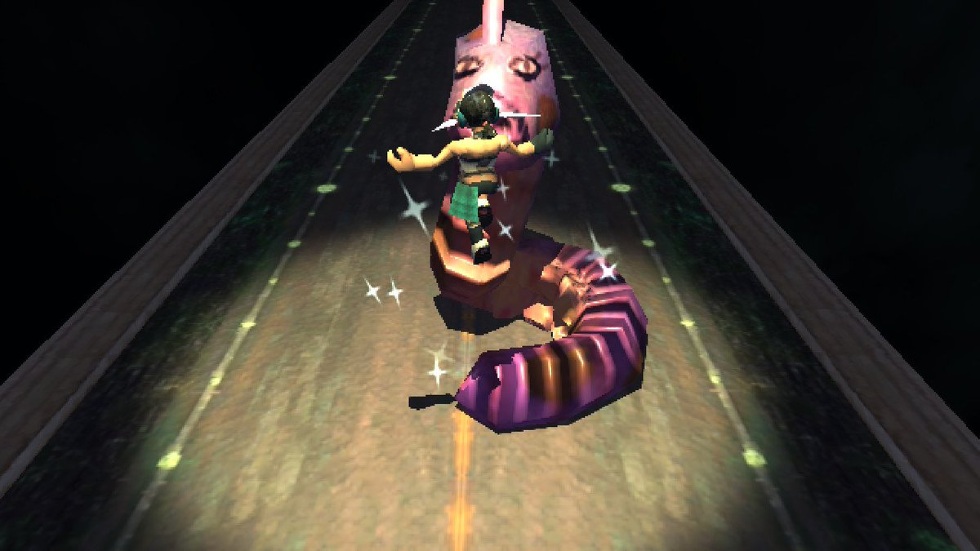 Nova will shrink down – after an almost annoying quick-time event sequence – to a level that allows her to enter anyone’s infested mind.

Anodyne 2: Return to Dust normally plays like a 3D Nintendo 64 or original PlayStation game. That changes when Nova enters someone’s mind, the gameplays warps into a 2D game in a style very reminiscent of 16-bit games on the SNES. 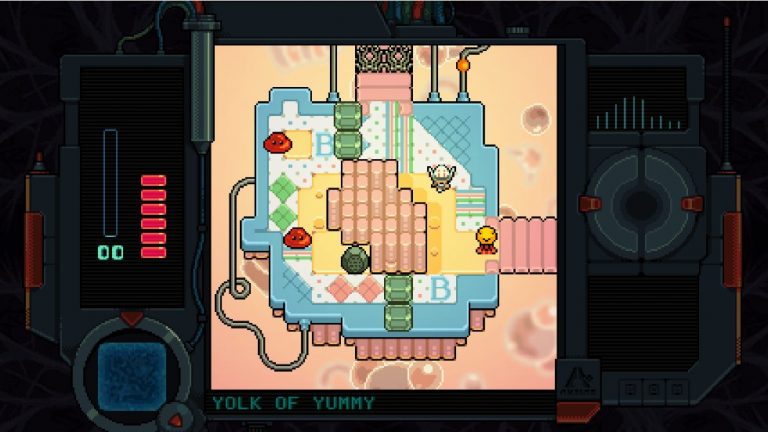 The gameplay perspective change is an aspect of the game I enjoyed because the game looks good in 2D. Unlike Anodyne 2‘s 3D world. Inside an individual’s mind, you are dropped down to a 2D Legend of Zelda-like dungeon map, which the game is very inspired by in both 2D and 3D.

While inside you can interact with mind-created NPCs, who are not in the right head and of course enemies. You can attack them by either sucking up objects or even enemies to vanquish them in one hit, one caveat you can only hold one of them at a time.

After learning the 2D mechanics, as Nova, you eventually make your way to the boss, who’s not that difficult to beat. Afterward, Nova goes to the room beyond to collect the nano dust, which is lodges deep inside the mind like a tumour, collect it by sucking it out. 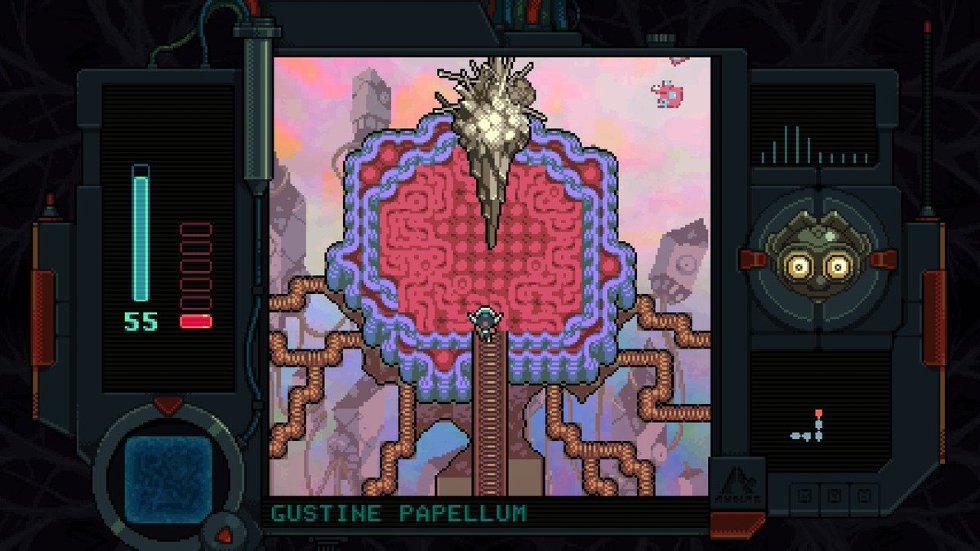 The game will force Nova out of the mind dungeon afterward, but you will be awarded a collectable card that can be used to higher levels in the game’s main city hub, The Center. At the basic level that’s the entire gameplay loop of Anodyne 2: Return to Dust.

Getting into the city hub, The Center is the first level of the multi-levelled dust prism. Another goal the game presents you with is to get to the top of the dust prism but the only way to get to the top is collecting the cards, collect enough and Nova can get to the next level.

The city hub also features a lot of ‘unique’ looking characters that left me a little disgusted and a lot of nightmare fuel. Looking at the game’s realistic art style with its characters in a cartoonish world, the choice is entirely intentional. The Center is a pretty big hub to explore but walking everywhere takes forever, to make it easier for the player, Nova is randomly able to transform into a car, which does not feature any sound while driving; one of many odd game design choices.

Overall, Anodyne 2: Return to Dust is a game I don’t understand why it is the way it is. Its intentional approach to remind me of the bad of 3D platformers from the Nintendo 64 is just head-scratching. While the 2D sections are fun, the amount of problems I had with other aspects of the game outweighs it by a lot. 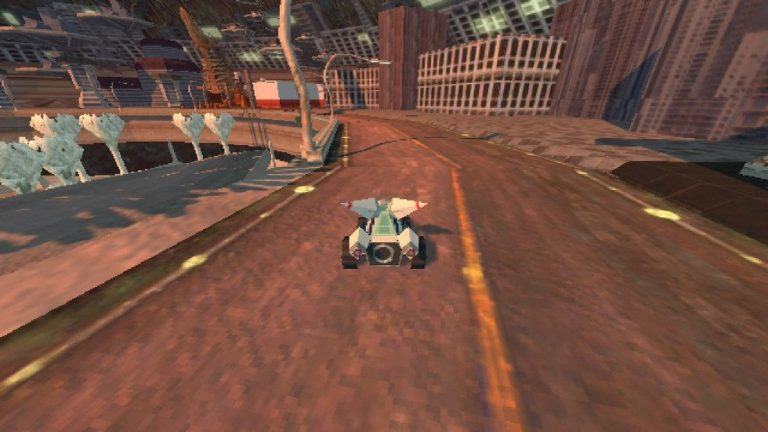 Also, the game is not that original, Anodyne 2: Return to Dust feels like someone took a lot of old games put in into a blender plus some mystery ingredients that got in there somehow.

Anodyne 2: Return to Dust isn’t for me and I didn’t enjoy the game at all during my 15 hours with it. It has a nonsensical story and a 64-bit visual style that just doesn’t look good in today’s age. While I had a good time with the 2D Psychonauts sections of the game, it was not enough to change my enjoyment of the game. Anodyne 2: Return to Dust feels like a game from a bygone era that reminded me most of the bad that came with the first generation of 3D games on platforms like the Nintendo 64 and PlayStation 1.

The worse thing I got out of the game was that I was bored by it which the worse thing I can take away from a game. If it was bad that’s a different story because at least I can get some enjoyment out of its ‘badness. Anodyne 2: Return to Dust isn’t a bad game, but it’s not one liked at all. I know the game has fans that look at it from a different perspective and see a good game here; I’m unable to see it that way. Anodyne 2 is a game that I did not get a lot of entertainment out of; I was more annoyed by the end of my time with it.

Knowing a bit more about Anodyne‘s history now, it’s a niche game that has its audience and its sequel follows the same line as the original in the series’ 3D debut. If you liked the original Anodyne then you’ll probably like this one. I feel like I’m in the minority of Anodyne 2: Return to Dust‘s quality, I don’t see the genius of what Anodyne 2 offers in game design/story and I’m okay with that.

Reviewed on: Xbox One