For a long time, the original Alan Wake was a game I never got into and it’s not like I wasn’t interested in it because I honestly really wanted to play the game but I just didn’t have the chance to. I never owned an Xbox until late last year so for me as a console gamer Alan Wake was stuck on Xbox for the last 11 years.  ‘Was’ is the keyword there as Alan Wake has finally spread its wings to PlayStation as the 2010 original game has been remastered for modern platforms, which was announced not too long ago, just in time for Halloween month.

The idea of an Alan Wake port has been speculated for years but more so recently after Remedy acquired the rights to Alan Wake back from Microsoft in 2019. Just last year, Alan Wake popped up again as an expansion in Control, which is connected to Alan Wake through Remedy’s shared universe of games. If Alan Wake was to come back it wouldn’t be as a simple port but one with a slew of enhancements like 4K resolution, 60fps and so much more. The remastered edition was a collaboration between Alan Wake Remastered‘s publisher, Epic Games, the original Alan Wake developer, Remedy and support studio, d3t that have worked on other notable titles like The Witcher 3: Wild Hunt and Mafia II: Definitive Edition. 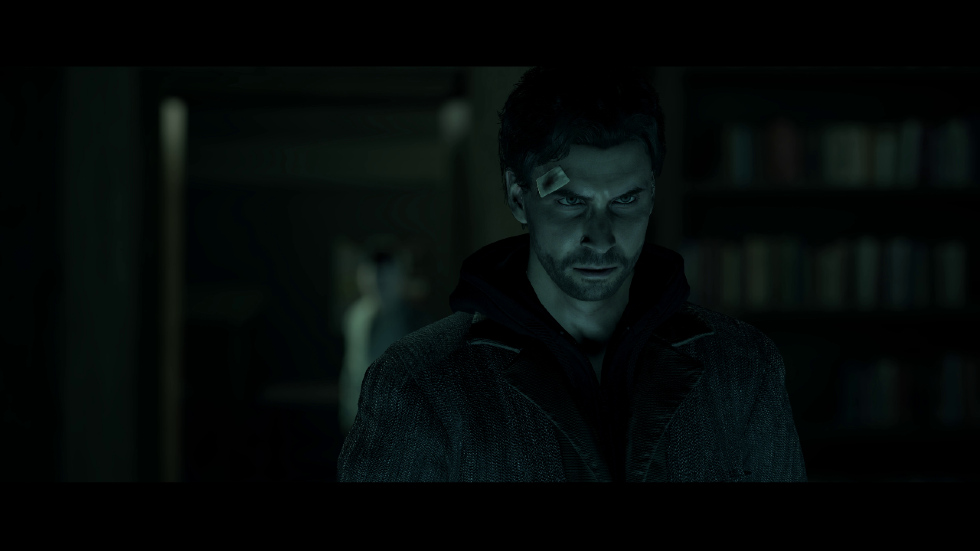 I think the remastered version of the game was a perfect way for a new fan like me to be introduced to the game, as well as a great way for older fans to revisit a game they liked. This is well known to players of the original game but Alan Wake is a fantastic game with masterclass storytelling that still holds up in today’s standards of narrative game design. It’s a different story for the gameplay because at times it definitely feels like Alan Wake is stuck in the Xbox 360 past with just way better visuals. If an Alan Wake sequel was ever announced I think the game design choices that makes it feel like an Xbox 360 game need to be approached differently by Remedy.

Alan Wake Remastered is a psychological thriller third-person shooter that’s paced like a cinematic  TV show as it is split into six episodes. The game puts players in the shoes of the titular character and best-selling thriller author, Alan Wake. While an accomplished writer, Alan is currently dealing with writer’s block that’s been going on for the past two years. To help get over that hill, Alan’s agent and best friend, Barry Wheeler advise that he and his wife, take a short vacation to the fictional town of Bright Falls, Washington. Before arriving by boat Alan is in having a nightmare where the game introduces players to the mechanics of the game and the enemies, humans taken over the darkness that are simply known as the Taken that Alan will face constantly through the game. 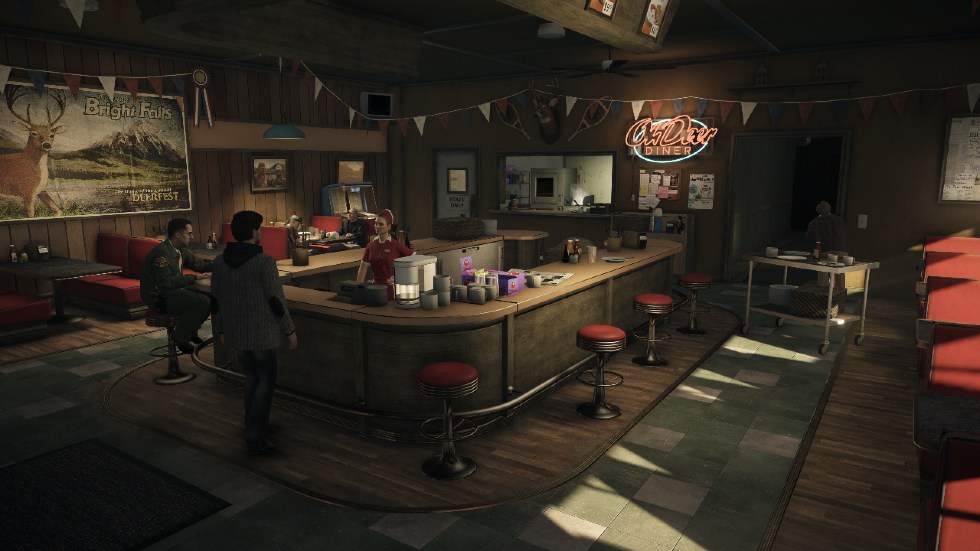 After waking up and going into town, Alan picks up the key and directions from an old lady in funeral attire at Bright Falls’ local diner but this was a trap that’s all part of a bigger plot that involves Alan Wake, Alice, Bright Falls’ past and so much more. After arriving at their isle cabin Alice reveals the purpose of the trip was not a vacation at all, but for Alan to see the town’s local psychiatrist who is known to help break writer’s block. This results in Alan becoming real angry at Alice and quickly leaves the cabin to blow off some steam. When Alan hears his wife, who has nyctophobia, an acute and irrational fear of darkness, scream after the lights go out at the cabin, Alan begins to worry and goes to her.

Alan quickly arrives at the scene to find Alice missing and then the game mysteriously skips a week where Alan finds himself in a car crash with no memory of the last seven days. This is where the game really starts narratively as Alan begins his journey to find his wife, what exactly happened in the last week and solve a mystery that’s been happening in Bright Falls for the last 40 years. Alan finds himself as the protagonist this time around alongside a cast of characters in one of Remedy’s best games which players of the original should know because Remedy hasn’t changed the game narratively in any way in Alan Wake Remastered. For this being my first time playing Alan Wake, it’s honestly a masterclass story executed beautifully that was complemented by the revitalized cutscenes and gameplay at 4K/60 fps really added to my overall experience with the story.

While the narrative is executed beautifully, Alan Wake Remastered‘s gameplay is where the game feels a bit rougher. Like I said before I don’t have the perspective of what Alan Wake played like back in the day so I can only compare it to modern games. To get into the good first, Alan Wake is a solid third-person shooter that I got a lot of fun out of, the choice of optimizing the game to 60 fps really helps during the moment-to-moment gameplay. I loved Remedy’s approach to Alan Wake‘s gameplay, the Taken have a thick layer of darkness that makes it impossible to shoot at. Getting rid of that layer is pretty simple thanks to your best friend, not Barry but your ever trustworthy flashlight. 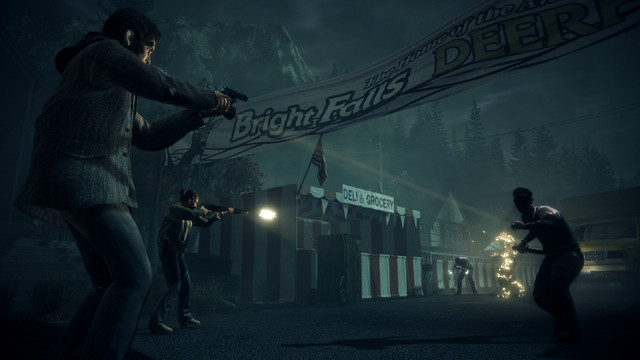 By aiming the light at the Taken, their darkness barrier slowly goes down and to make it go down faster you can focus your flashlight but this will lead to draining the battery. Afterward, Alan can put a new battery into it which you can find throughout the game which you can hold up to a maximum of 20. This approach is one I really liked as Remedy really added a strategic element to taking enemies down in the game that I wasn’t expecting but did end up enjoying. When enemies do pop up it can get a little scary at times but not in a horror way as Alan Wake is not a scary game but it has its thriller moments where jump scares legitimately gets me at points.

Gameplay Feels A Little Stuck In The Xbox 360 Era

As far as things that weren’t enjoyable gameplay-wise, Alan Wake Remastered did feature a couple of small aspects of the game that I found annoying. None of which is anything I find truly bad perse but for me either was an aspect from the original Xbox 360 game that has not aged well or the lack of inclusion I was pretty bothered by. The first thing has to be a lack of an actual map which was really disheartening as someone who likes collectable hunting. There is a lot of collectables in this game which made it more of a struggle to figure out the exact spot without a map. Additionally, I definitely felt at the time like I could get lost if I went off the beaten path. An actual map would have been a definite plus like giving me a better idea of where or how far the main objective is instead of a mini-map that gives a general direction where plus an easier way to tell where collectables are for trophy/achievement hunters like myself. 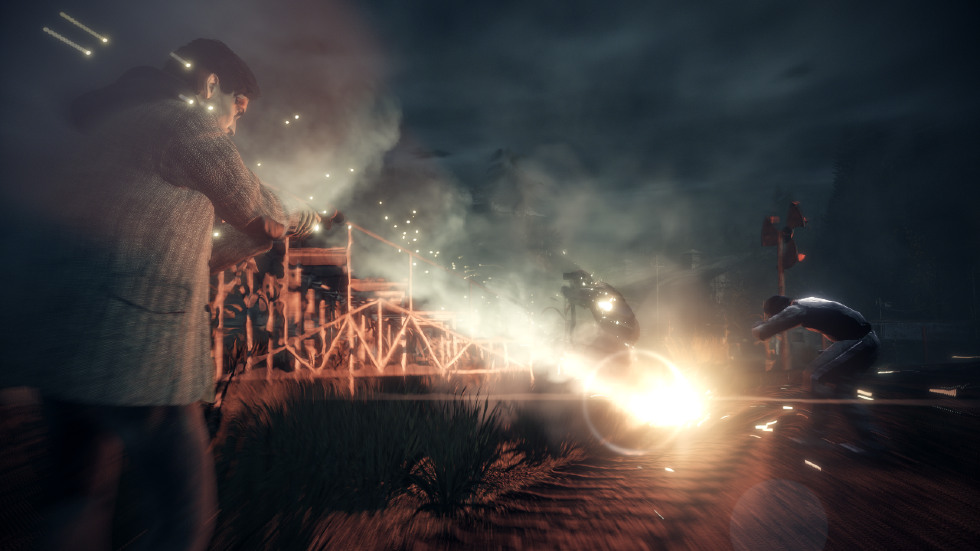 Speaking of collectables, so the game has manuscripts you can collect that are pretty important to the story but you don’t really need to collect them for the story as it just assumes you are which is reflected in the campaign, Anyway, one thing I hated about them is that out of 106, 15 of them are exclusive to the game’s highest difficulty, Nightmare mode and I only played on Normal because I wanted to get through the game quicker for my review so I missed out on that sadly. For me, difficulty exclusive collectables is a huge turn-off and not something I want to see attempt again as it makes your game less accessible for players who choose to play on an easier difficulty for the story or convenience. If you were to go easy and go for all the collectables, it’s literally impossible for anyone to collect everything with these difficult exclusive collectables.

One thing that was really frustrating throughout the game was Alan losing his weapons constantly and starting from scratch. It feels more hurtful when all your stuff disappears especially with the amount of ammo and grenade-like items I had stocked up. At times it makes sense narratively to start over but other times it doesn’t. The actual combat of the game feels on a level below other third-person shooters I love but what feels lacking is the dodge and sprint mechanic it feels very stuck in the Xbox 360 era and doesn’t feel very intuitive in today’s standards. I get Alan Wake is a writer and is not in the shape of other protagonists in this genre but I feel like Remedy of today could modernize these mechanics in a possible Alan Wake sequel. 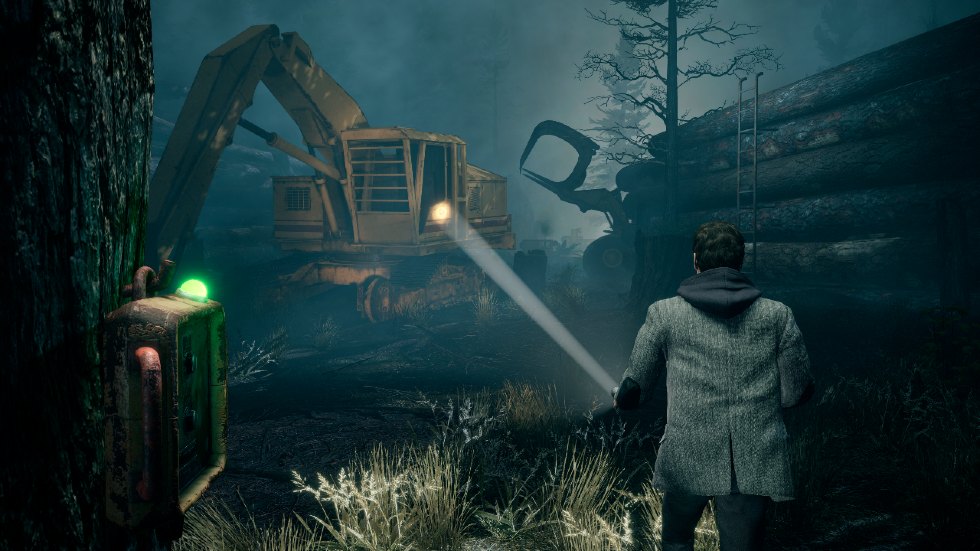 The main appeal of Alan Wake Remastered‘s release is definitely the upgrade to Alan Wake‘s remastered in-game visuals and remarkable stunning cutscenes for the 2010 original game. I think the dev teams did a fantastic job bringing the game to 4K, it feels very much like a modern game from a presentation perspective. Additionally, the choice to optimize the game to 60 fps really helped the game for me as it plays much better with the addition. There isn’t much to criticize as far as the visual upgrades the dev teams nailed the remastered aspects of the game even the touches to in-game visuals like environments look more impressive than the original game comparatively, they nailed what they were going for so I applaud both teams.

In addition, Alan Wake Remastered doesn’t just come with the base game but includes DLC that followed a little after Alan Wake’s initial release on Xbox 360. Both pieces of DLC, The Signal and The Writer have been also remastered and players can jump into the game at any point right off the bat. 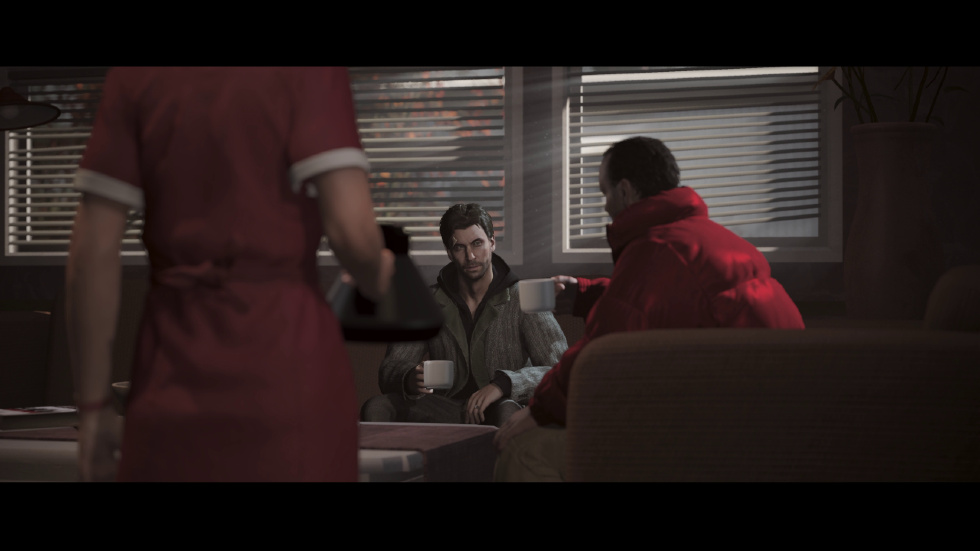 At its core, Alan Wake Remastered is a really great game that feels dated at times during gameplay sessions but is one I’m really glad I finally took the chance to experience for the first time. The enhancements to cut scenes and in-game environments, character designs and overall atmosphere of the game is worth a revisit for fans of the original or one that newcomers to the game should definitely pick up. Alan Wake Remastered is currently available on PC (through the Epic Game Store), PS4, PS5, Xbox One & Xbox Series X|S.