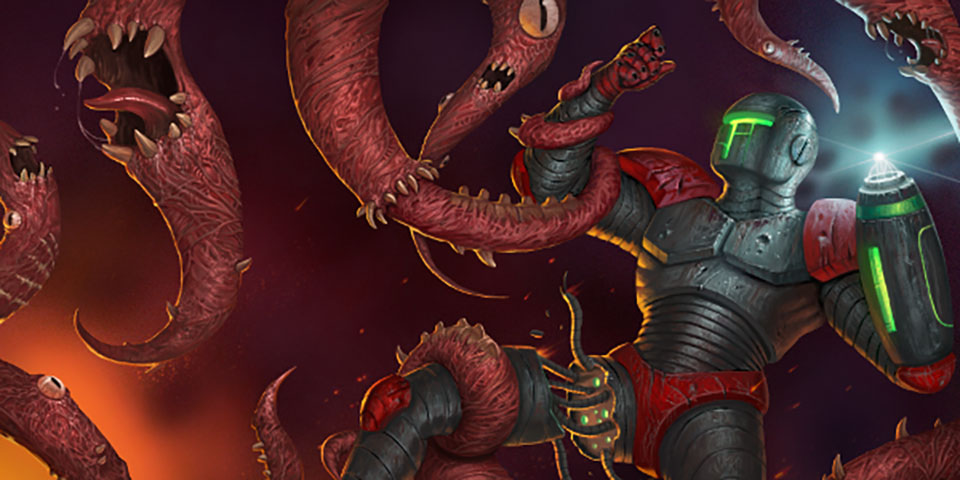 The first Metroid game was released in the late 80’s and brought with it a new gaming genre, that is an exploratory 2D platform that has the player constantly going back to previous stages of the game to find items or unlock new areas. A Robot Named Fight is a love letter to this type of gaming unashamedly taking aspects of what made Metroid games great and in some areas providing its own unique twist to it. What’s most impressive about this game is that it was made by a lone developer, Matt Bitner, and just goes to show you the power of indie game developers and the incredible games that can be created by a small team of people. However, does a Robot Named Fight do enough to stand out from the Metroidvania crowd? Or does it fall flat in its creativeness? The game has you playing as a robot tasked with stopping the Megabeast. If unsuccessful you will be discarded on top of an ever-growing pile of robot scrap. While the story starts off promising to start the game it doesn’t develop much more after that. You are then thrown into an environment that has you finding your way around with no waypoint or direction given. Similar to Metroid games only some rooms are accessible to start while others require you to upgrade your weapon in order to gain access. You will find yourself double backing quite a bit in order to access those previously closed rooms. On top of that, there are many secret and hidden areas to find in some rooms that will help you power up your robot. Once you get killed that’s where things get interesting.

With most games when you die you respawn to a checkpoint close by in an environment that remains unchanged. In a Robot Named Fight that environment changes and provides you with a new world to traverse. Everything is changed around: the rooms, the location of new weapons, the bosses, everything. This has the unique feeling of not totally being upset when you get killed as you get to start a different journey once you come alive again. The one thing that is a little frustrating though is that you lose everything and you have to find all the weapon upgrades and power-ups all over again. So the third and fourth time around instead of entering a room gun blazing you end up a little more cautious in your approach as the last thing you want is to start from the beginning again.

The game, like most other indie games, has 2D 16-bit graphics. The graphics make it look and feel like the game was released back during the SNES era and doesn’t do much to modernize it, as some other indie games do. The music has that 90’s retro feel to it but is a perfect fit for this type of games. The enemies are a little bit challenging but nearly all have the same predictable move set. While at times it felt like a Metroid game, with almost an identical arsenal and features, a Robot Named Fight is a decent game in its own right and it tries to change up the formula with its ever-changing world every time you get killed. Its story is a little bland and starting from the beginning every time you get killed does get a little bit repetitive but that’s made up of the fun boss battles and weaponry. If you enjoy Metroidvania type games or the Metroid series then this is a game to pick up with a somewhat satisfying experience.