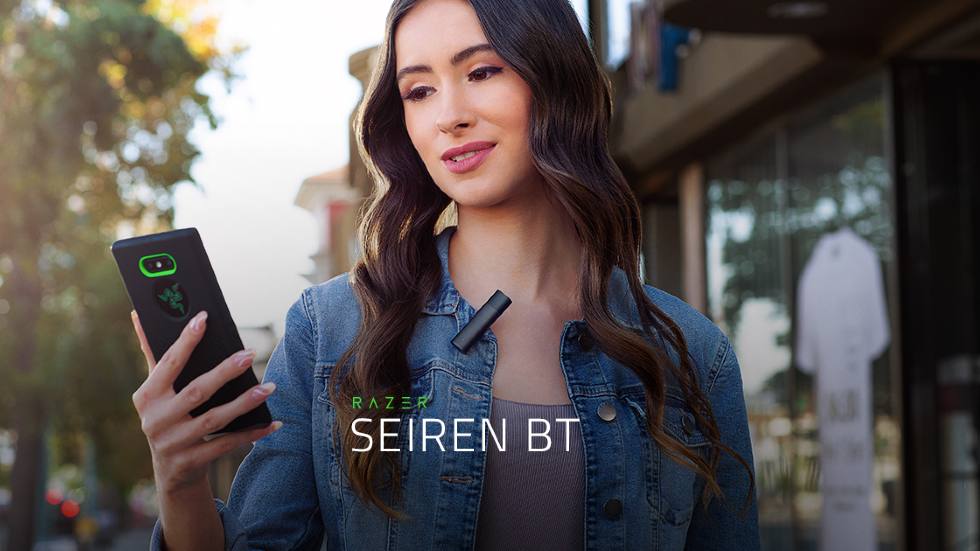 It would appear that Razer is a beast of the computer and gaming peripherals market who won’t be satiated by taking a bite out of that market alone.

The Hong Kong-born company is taking one big leap into the world of streaming goodies with a lineup of tools intended to bring some bite to your next stream.

Now, I am not a streamer, and I don’t really watch any streamers. But I do know a fair few of them. And I know only a handful confident enough to trust Bluetooth mics when they are streaming. So I’m honestly surprised to see Razer standing behind the Seiren BT as something live audience-approved. But Head of Razer’s Mobile & Console Division Richard Hashim says in a company press release that I need to suspend my disbelief. “Until now, IRL streamers have needed to use a wired microphone to deliver clear audio to their viewers, limiting how much they can move around or change the view from their mobile, especially in noisy outdoor environments… Now, with the Seiren BT, IRL streamers have complete freedom of movement, holding their mobile wherever they want to capture the shot, without cables getting in the way, to give their viewers a rich, engaging experience with even, balanced audio levels.”

As a radio arts-trained, professional transcriber who listens to people talk live, and in recordings for a living, I’m still not convinced Razer’s Bic lighter-looking mobile Bluetooth mic can deliver, but I’m happy to be proven wrong.

Speaking of listening to people talk for a living, I would be lost without the various DACs and audio Mixers I use at my desk and in the field. So I’m intrigued to see Razer launching their own four-channel mixing box that I also haven’t yet tested, but it certainly sounds stacked! The Razer Audio Mixer, according to the company, allows streamers to control multiple audio sources on the fly, balancing the volume levels between sources, muting channels as needed and even adding vocal effects to enhance their streams. It also offers a wide range of audio connection types and even has onboard hybrid-XLR with 48V phantom power, which will grant you the full compression of applicable mics and have you sounding like you are in a radio-quality studio even if you are on the go recording at a local LAN event in a cavernous convention centre. As a bit of a recording snob, I can tell you this is a feature you’ll want for your streams.

What I can see is a huge advantage for streamers is that the Razer Audio Mixer functions as a centralized audio mixing software suite, fully integrated into Razer Synapse 3 and supports all digital audio output sources, including game sound, system, chat, and music sources. Through Razer Synapse 3, users can access a range of audio adjustment options, from software-based noise gate and EQ functions to reverb and voice changers. Each audio source can be balanced, mixed and mapped to the hardware functions on the Audio Mixer, with the audio settings and processing offloaded to the Audio Mixers onboard processor, freeing up system resources on the PC. That last part is huge because it makes this a mobile toy you can take to the field with you. But it also takes a huge load off of your computer so that it can focus on some of the other power-intensive tasks involved with streaming.

Whether it be RGB mayhem or angelic halo-given ring lighting, streamers are masters of lighting concepts. Nobody’s going to stick around if you’re blown out or hidden in the shadows. So the Razer Key Light Chroma is sure to be a streamer’s favourite tool for staying illuminated. This clamp-on desk lamp is pretty standard, all things considered, but it does come equipped with Razer’s extremally customizable Chroma RGB system, which will help streamers set the mood with over 16.8 million colours and countless lighting effects. Pick your signature colour palette to build your image, and then sync it with your Razer Chroma ecosystem to keep things colourful!