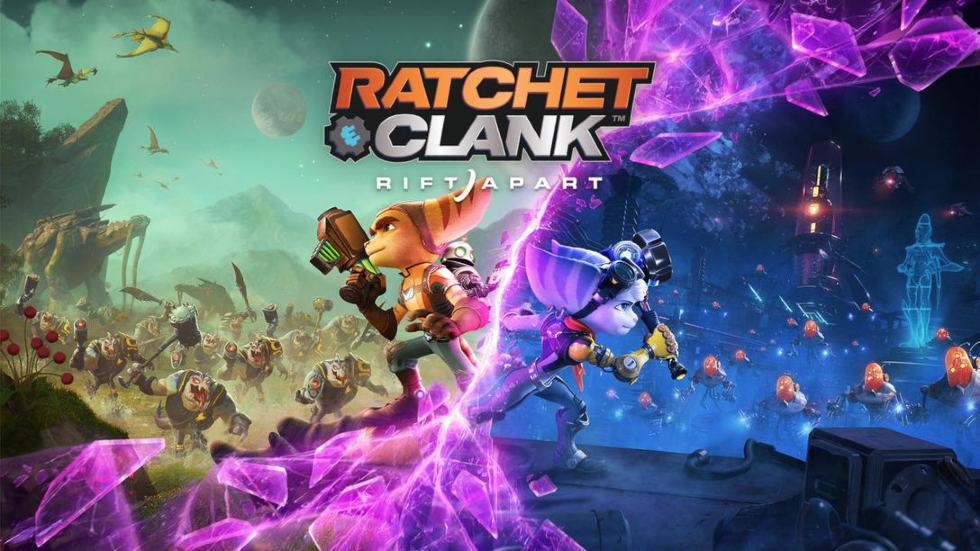 It would appear that Insomniac Games is quite committed to having their forthcoming entry into the Ratchet & Clank franchise inducted into the accessible video games masterclass.

A couple of days ago, they released a rather extensive list of accessibility options that are organized as you would find them on a well-created in-game menu.

The list features a handful of difficulties, which is often the first level of Accessibility found in games, but it also features several visual, auditory and tactile options that disabled gamers have come to expect from their virtual experiences. And Insomniac Games is inviting people to reach out with any ideas they feel are mission or could use more clarity.

Now, I wanted to take some time to break the list down for those who are maybe less experienced with judging accessibility options in video games. I’m going to be doing so in terms of four categories: cognitive, visual, auditory and tactile.

Cognitive abilities perceive how we play

As the title reads, cognitive accessibility settings help a user understand or perceive a game in a way that is free of barriers.

Difficulty modes are sort of a base for cognitive abilities. Not all of us can juggle fighting 12 minions at once or a boss that hands us our ass on a silver platter after one hit. That can be totally overwhelming! This is a large part of why lower difficulties in games do things like thin out the number of enemies and lower damage outputs.

Notice how the wording seems to suggest that the challenge is coming from the brutality of foes. That’s pretty standard in terms of difficulty settings. A big point I would like to suggest to you is that disabled gamers aren’t asking to play a different game than non-disabled players. We want to fight the same foes because that connects us to the overall experience we can all share. Sometimes, we just want the grace not to be overwhelmed! Or if you’re me, you don’t want a single muscular spasm to be your end, but I’ll get more into that in the “tactile” section.

Something I found interesting in terms of cognitive accessibility here is the ability to turn off tutorials. Tutorials are an aspect of gaming that a lot of forward-thinking developers are paying mind to these days. I am sure many of your reading this can appreciate that having hours-long tutorials either at the start or throughout games can be as annoying as tutorials for mobile app gacha games.

Seriously though, tutorials are an interesting aspect of accessibility because some disabled gamers are asking for the ability to turn them off and figure out things at their own speeds and others one them to pop up frequently, say a how to double jump reminder or a button association on how to parry a forthcoming enemy attack. Having tutorial and reminder options is such an important part of cognitive accessibility.

Picking settings for the camera is one of those times where there’s intersectionality between ability types. First off, here are Insomniac Games’ camera control options

While most of these appear to help purely visually, it’s important to remember that we all think differently when it comes to direction. So that’s how things like inverted controls promote cognitive accessibility.

A really interesting one I was surprised to find is the option to play the game at 70%, 50% or 30% of normal speed. Anybody who’s ever tried to learn music or language by ear can tell you how important speed is to cognitive ability. This is a really cool feature that has really only appeared in the most accessible of games so far.

Let’s move onto visual options, shall we?

First off, I am sorry for the pun! It’s baked right into the title, video games are a visual source of communication and entertainment. So having the option to make it easy for you to see is key for the growing number of gamers with vision-related issues. Let’s break down some of what Ratchet & Clank: Rift Apart is going to do. 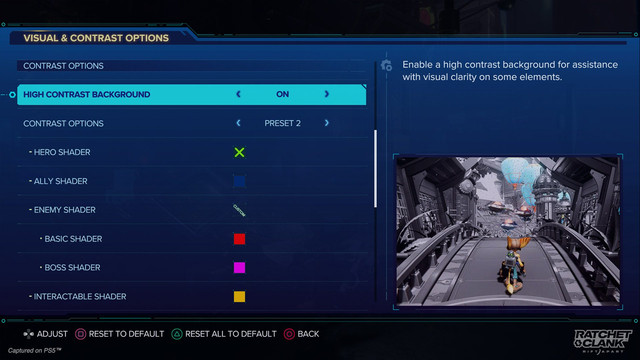 The standard things like HDR, brightness and contrast options will be making appearances, but Insomniac Games is also following the incredible work studios like Naughty Dog and Ubisoft have done in providing visual accessibility through things like shaders. For those who don’t know what those are, they are outlines and colour patterns intended to help players with less visibility to identify the worlds we immerse ourselves in when we game.  Here’s a great example of shading from Naughty Dog’s The Last of Us Part II. 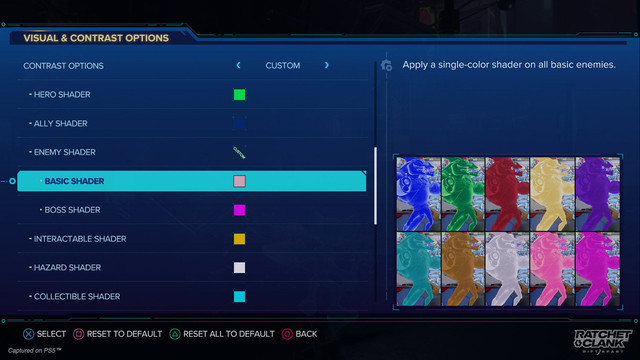 How many visual effects you have in your game goes a long way to visual accessibility. When you have trouble perceiving movement, things like screen shakes and depth of field can be extremely disorienting. But for those with colour blindness and troubles with contrast, settings like chromatic aberration and the ability to add film grain can make it much easier to keep an eye on the objective. These are all settings Insomniac Games will be offering. Here’s some more on them: 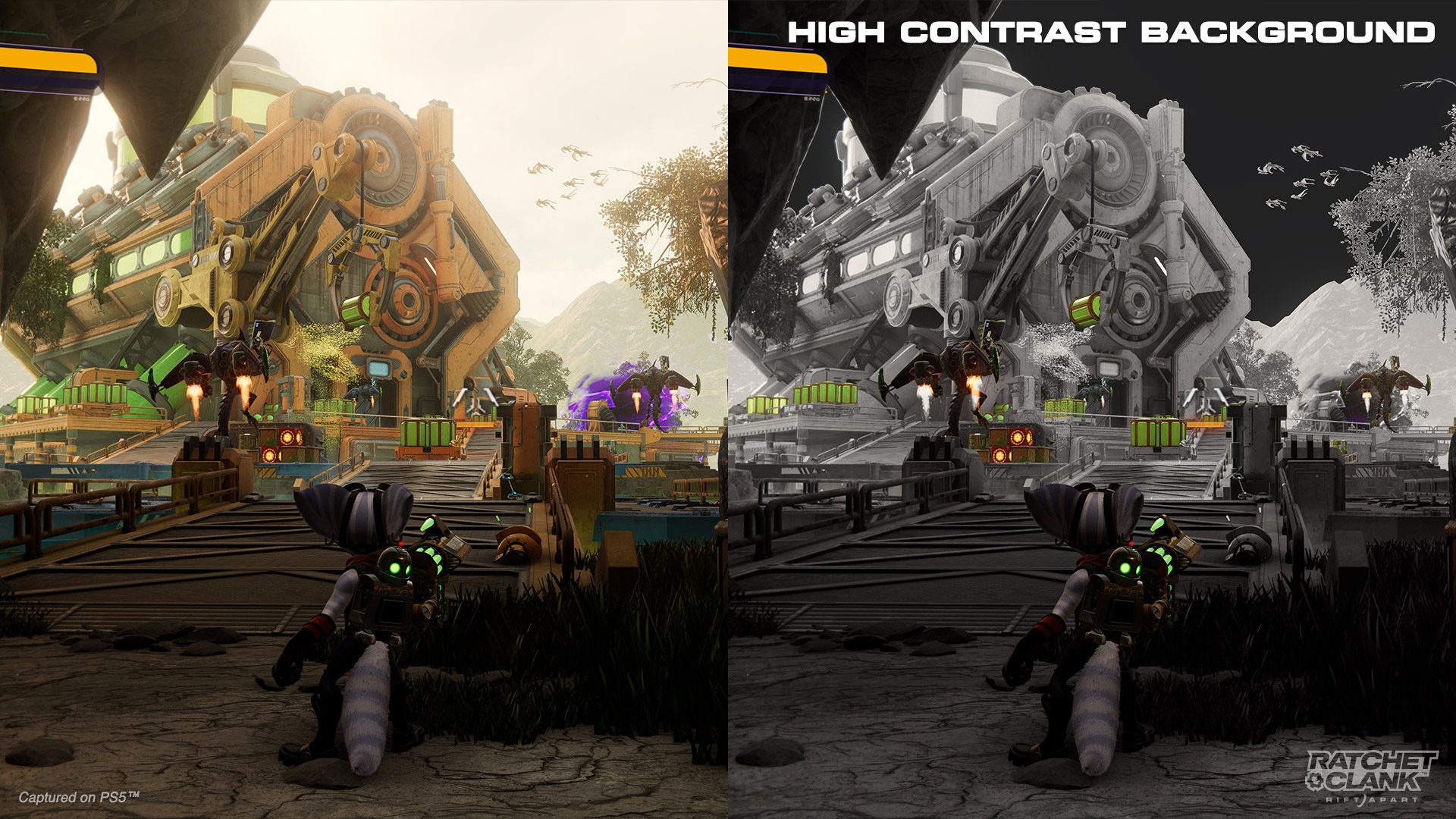 The HUD system in Ratchet & Clank: Rift Apart is getting several cues and colour options to improve visual accessibility. This is, of course, great for people with vision issues, but it also goes back to cognitive abilities in helping to guide you and prompt you as to when something can be interacted with in the world. Once again, here’s a great example from The Last of Us Part II.

It would appear that Insomniac Games is aiming to do the same with the following HUD options:

Now, let’s move onto audio because for those hard-of-hearing, tweaking audio settings makes the difference when it comes to true immersion and missing out.

Don’t be Pokemon Sword and Shield

Game Freak was forced to defend itself from the ire of many Pokemon Sword and Shield fans when they decided to hide audio controls behind an item in-game that took an amount of progress to get and could also totally be missed. Don’t do that! It’s a terrible game design that will anger people. If you need evidence of this, look at the edit this Redditor made to their post about this. RIP to the inbox!

In many cases, an audio menu and narration menu should be the first menus you are met with upon starting a game.

While I have yet to confirm with Insomniac Games about this, there appear to be several auditory options present in the menu including: 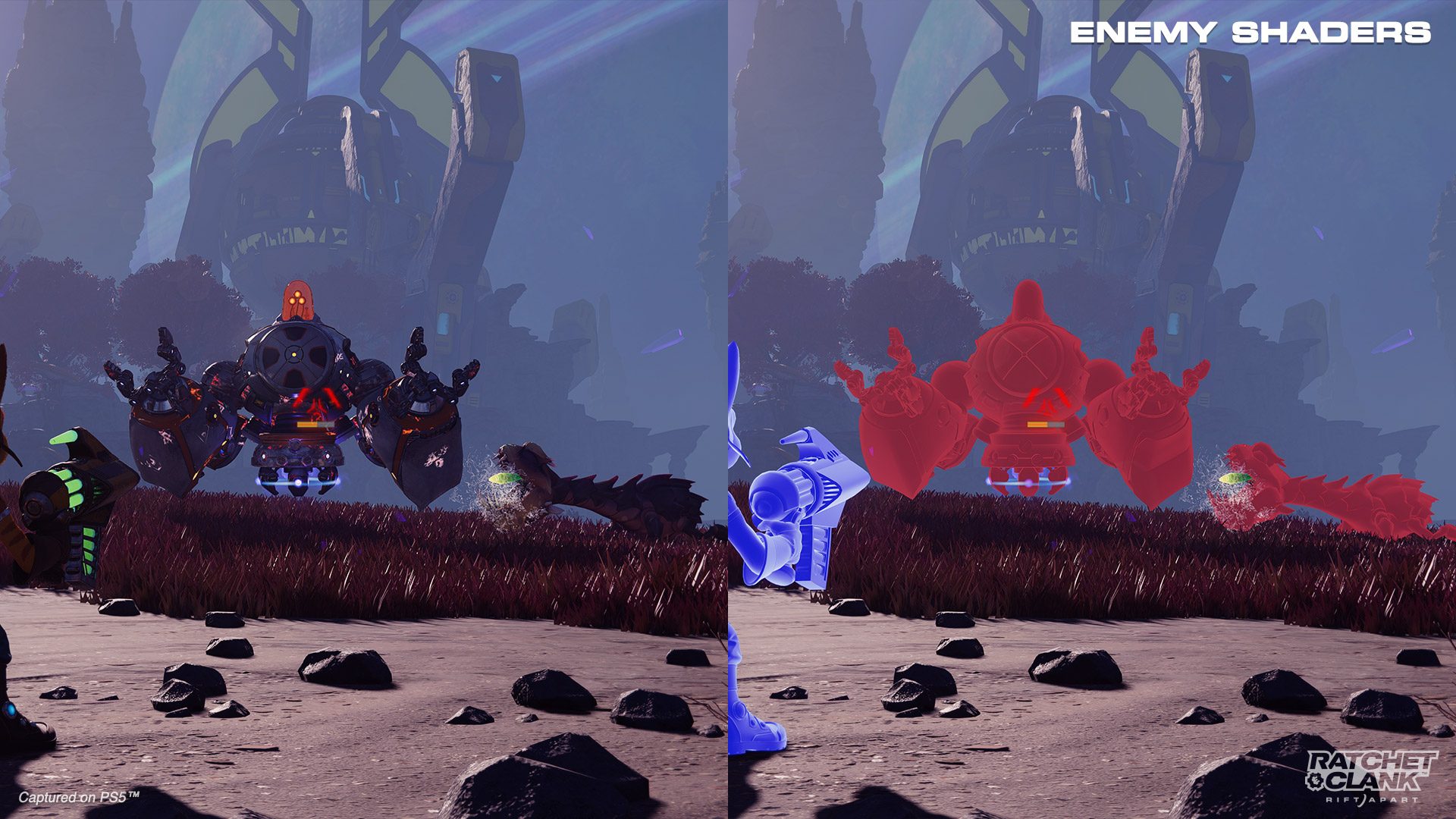 Let’s get to tactile accessibility and call it a day!

Touching on how we physically feel games

Rad, another sick pun! Honestly, tactile accessibility is my domain. As a person with persistent muscle spasms, I often find myself needing things like snap-to aim assist, hold button inputs and lowered drag on my sticks. However, tactile accessibility can go as far as allowing you to control everything with one hand. Take Playground Games’ Forza Horizon 4, which allows players to totally customize up to 5 control profiles and even drive one-handed with a controller.

Insomniac Games has put a great deal of attention into how those with tactile challenges like myself can modify combat and traversal as well as button remapping – often the most crucial of tactile accessibility in games. As someone with frequent loss of control due to spasms, I’m thrilled to see the ability to toggle falling off ledges. This is an element of platforming that I struggle greatly with!

There’s also a hefty selection of automatic settings that can be applied to flying, shooting and traversing that is key for those with less dexterity or muscle tone, which is great to see! the ability to map all traversal options to a single button is a huge addition to the Ratchet & Clank Series because traversal in these games’ landscapes has always been vital and having the ability to make this possible with a single button will help a lot of players who don’t have the dexterity for multiple inputs.

There’s been a real push with the big console makers over the past couple of generations to ensure that there’s greater accessibility built into the base systems. As a gamer with a physical disability, I’ve always used sliders and remapping for controls, and they’ve always been great. But it’s great to see that cognitive accessibility options like controlling tutorials, highlights and prompts and difficulty settings catching up. It’s important as a designer to think in terms of all your senses stretching to the visual medium of gaming. There’s also been a large focus on leading by example when it comes to accessibility options in games produced by their first-part partners. I hope that this list has convinced you that studios like Insomniac Games can create for larger player bases. It doesn’t have to stop there and there is much work to be done. Studying lists like this one is a great way to inform all the ways we create and play. Here’s hoping more studios take the approach Insomniac Games does by communicating with disabled gamers to make them a part of the action.