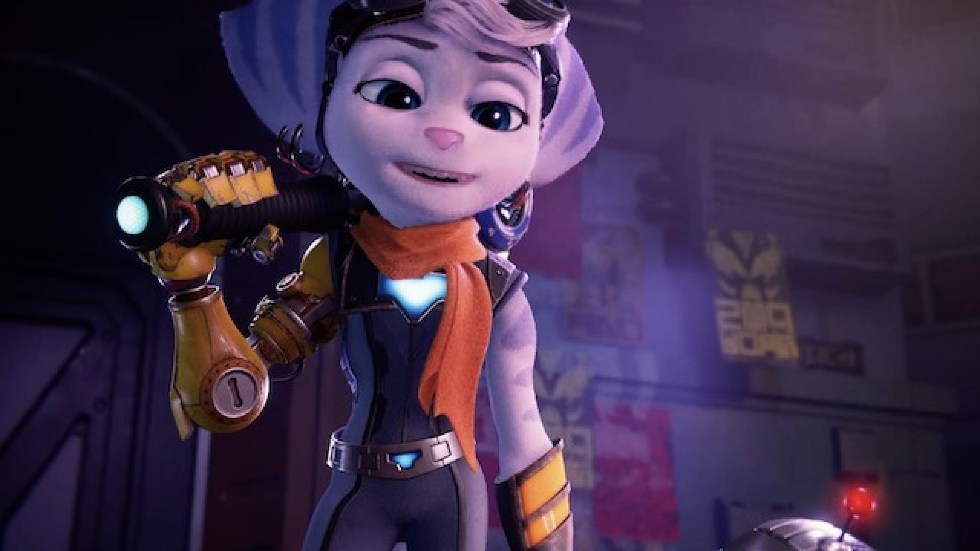 Everything We Saw in an Exclusive Ratchet & Clank: Rift Apart Demo

Last week, Insomniac Games held a virtual press event where we saw new gameplay, learned more about the systems powering the game, more about Rivet and how the music will make you hum along as you play the game.

We start with Ratchet & Clank acknowledging they’ve been away for years and are attending a celebration for them. Qwark serves as the Master of Ceremony for the event and begins with our heroes being celebrated for their achievements and saving the galaxy Clank has a gift for Ratchet but the focus right now is getting through the parade. Back in control of Ratchet, you go through the tutorial explaining the controls – the game is absolutely stunning as a fireworks display goes off in the background. Moving through the city, you pick up your pistol and shoot some Blarg ships when a bounty hunter appears and rains on your parade. A fight breaks out and it feels like a Pixar film brought to life as you end up riding a rail to catch up to the parade route while being attacked. With the Magna Boots activated, Clank postulates that Dr. Nefarious is behind the attack. 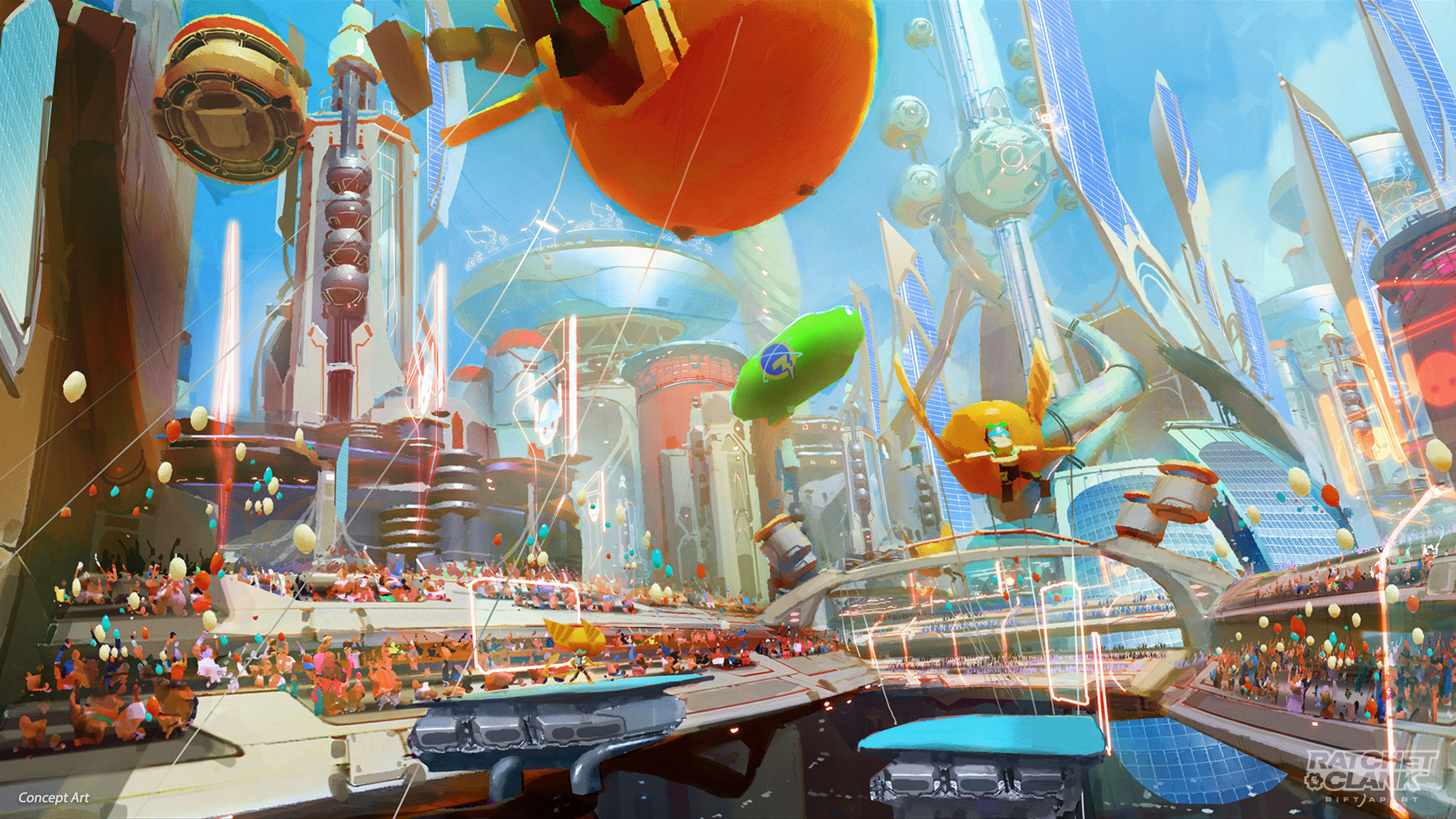 We catch a glimpse of Ratchet fighting off robotic dogs with his Wrench before gliding down and attacking waves of Blarghs with the Burst Pistol. It’s a relentless attack and these bounty hunters want their mark; I’ve never felt the series to be frantic but everything is happening at such a frenetic pace. Weapons level up, we see the Burst Pistol gain a level as Ratchet and Clank catch up to the parade. Clank has a speech prepared, and we learn that Clank created the Dimensionator so that Ratchet can explore the dimensions for his family before Dr. Nefarious appears and opens up a rift.

With the massive portal in the sky the world begins to change, floats break apart due to the force of the portal, leading to the Dimensionator. Just like old times, Nefarious is at the train station so the duo hops off to stop him. 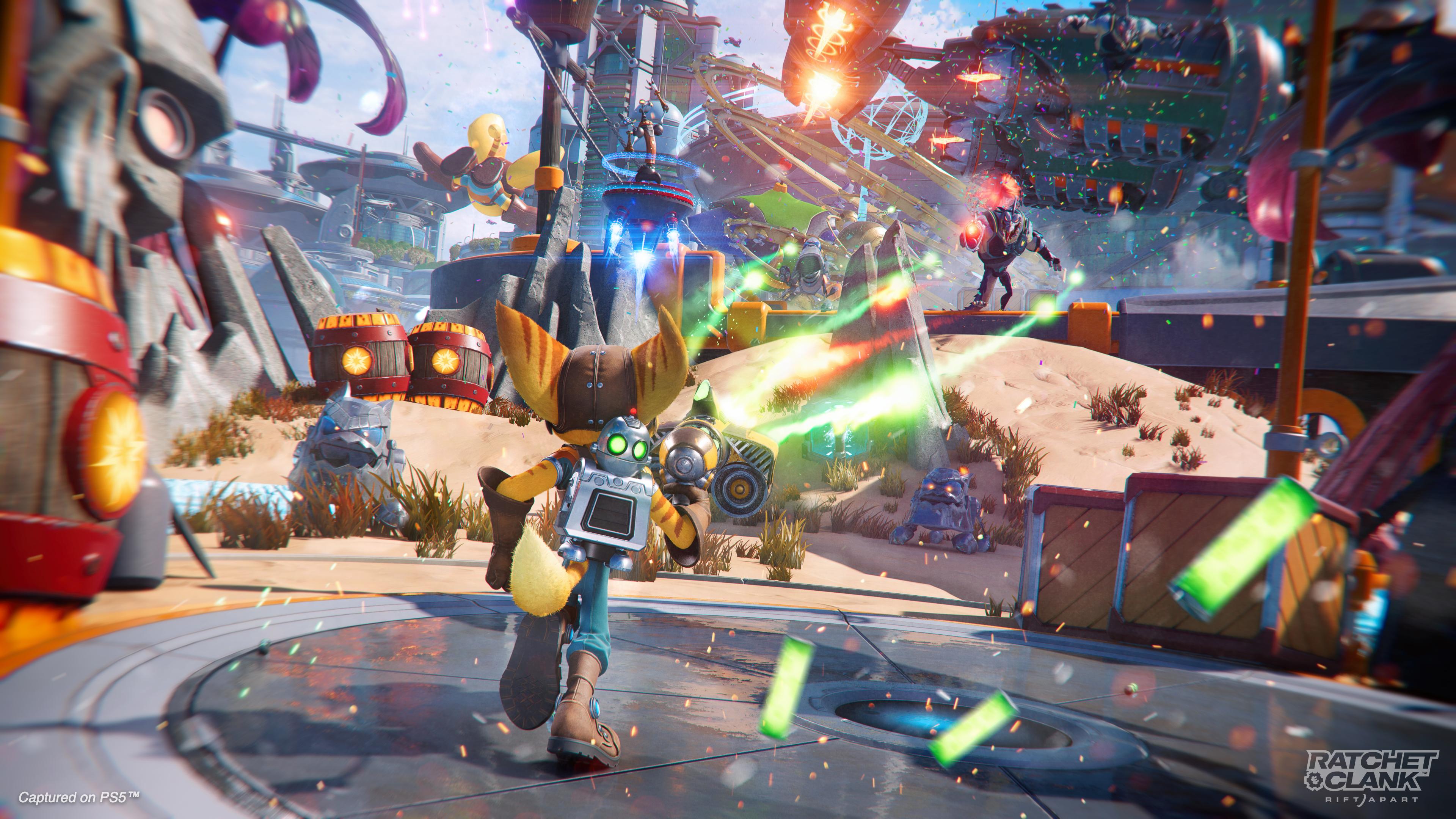 Next, we pick up with Rivet and Clank, the two talk about their dimensions and how they do things when it comes down to getting things finished. We land on Torren IV and look for The Fixer but the bridge is out due to bandits destroying it. Heading into a dusty, western town Rivet stops and sticks upon a new weapon and runs into an information dealer, mentioned that the Fixer is single and can fix Phase-Quartz, and is single with a nod to Rivet.

The demo features Rivet and Clank working on trying to Reboot the Fixer while staying on their guard against space pirates. We see Rivet navigate through the mech graveyard while using some of the game’s wildly imaginative weaponry, including a few things like the Drillhound and Void Repulsor, the Glove of Doom and more. Rivet must recover the Hurlshot from the Smelting Pits but she’s met with dozens of local wildlife, including massive bugs and deadly mutant crabs. 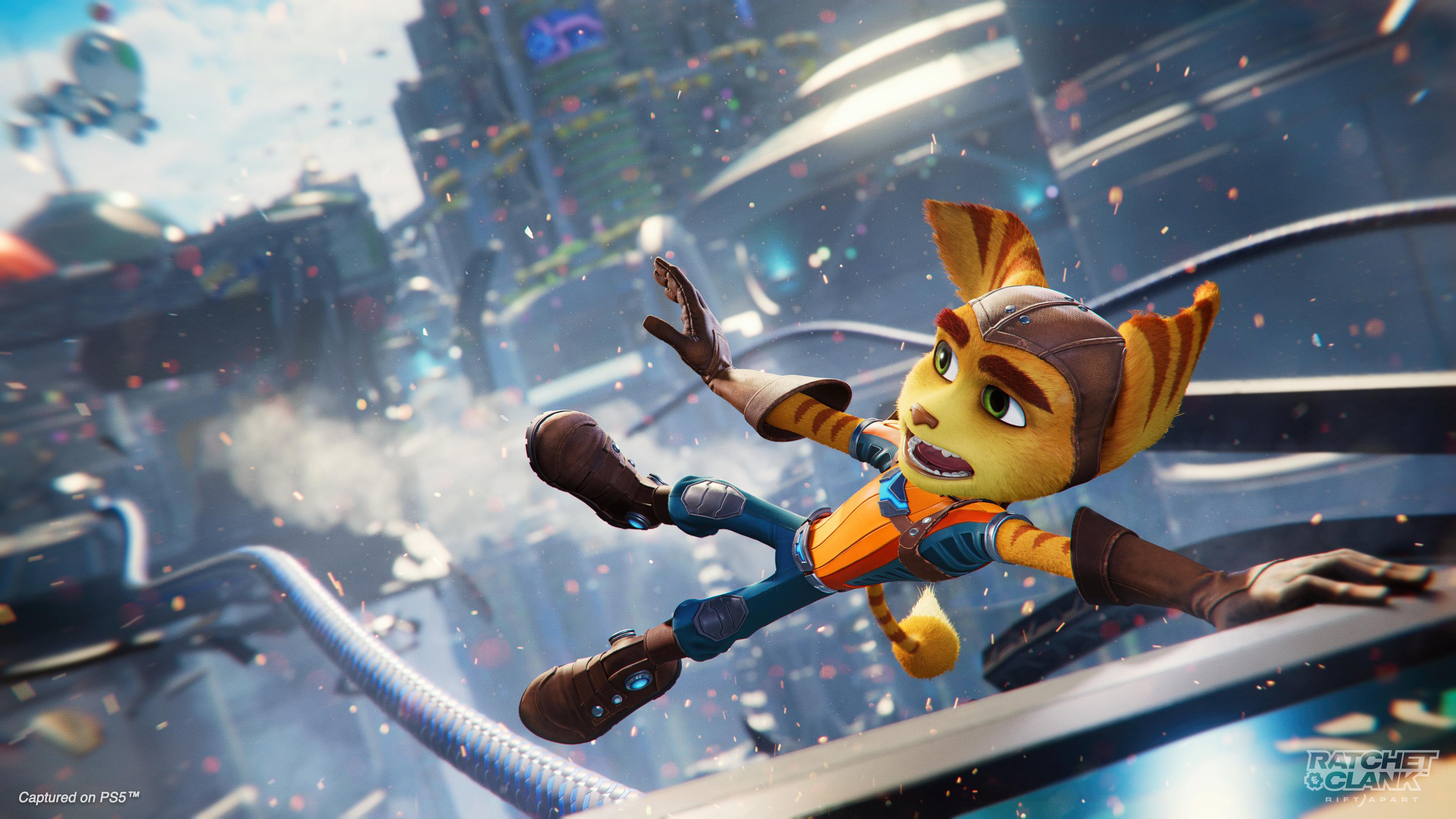 Another on-rails section where you’ll need to maneuver between incoming objects and obstacles, it’s a standard setpiece but adds rifts to the mix by allowing Rivet to move to one and continue across a gap otherwise impossible to cross. From there, the local pirates confront Rivet, looking to also grab the Hurlshot from the Smelting Pits and another encounter begins. Enemies are shielded but thanks to the various weapons at your disposal, taking on such a large number of enemies is exciting due to the way the weapons work. A ricochet shot bounces off several enemies before exploding and taking them out of the chaos.

With the Hurlshot, Rivet can move across large gaps at breakneck speed. Another wave of pirates begins descending upon Rivet and Clank but the enemies are outmatched because of the Lightning Rod, a gun that stuns and shocks enemies. Buzz Blades return and they fire saw blades that ricochet off enemies, but the Negatron Collider is a new addition that sends an energy blast through enemies.

After several waves of enemies, “Wee” Roger, a giant robotic pirate appears and serves as a boss encounter. He is fast and powerful but Rivet is well-equipped and can make quick work of him, Rogers likes to get in close and deal physical damage so it is advised to stay away from his up-close attacks.

Rivet discovers a pocket dimension where she uses speed to collect bolts as she moves through a poisonous environment. Rivet navigates this dimension by riding a Speedle and uncovers the Lombax Praetorian helmet in this dimension, the first of three pieces. I imagine we’ll be collecting armour sets as we explore the various worlds and dimensions. “Still weird,” says Rivet as she heads out of the rift. “Weird, but fascinating.” Clank counters.

There’s no room to breathe as Rivet is once again ambushed by more pirates. Watching Rivet take on so many opponents is thrilling, but she is capable and holding her own without a second to miss. During a second boss encounter, “Not-So-Wee” Roger reappears and he is furious he was defeated. Roger is much more offensive this time and he isn’t the only opponent you’re left to worry about. Mr. Funghi, a new weapon in Rift Apart appears and joins Rivet in dealing damage to minor enemies trying to attack, During this gameplay demo, I watched as Rivet moved with such tenacity with such speed that she moves with an afterimage effect. The gameplay feels faster when using Rivet and I like the change of pace. And since she has Clank with her, some great banter and discussions are happening as you make your way through the mech graveyard. 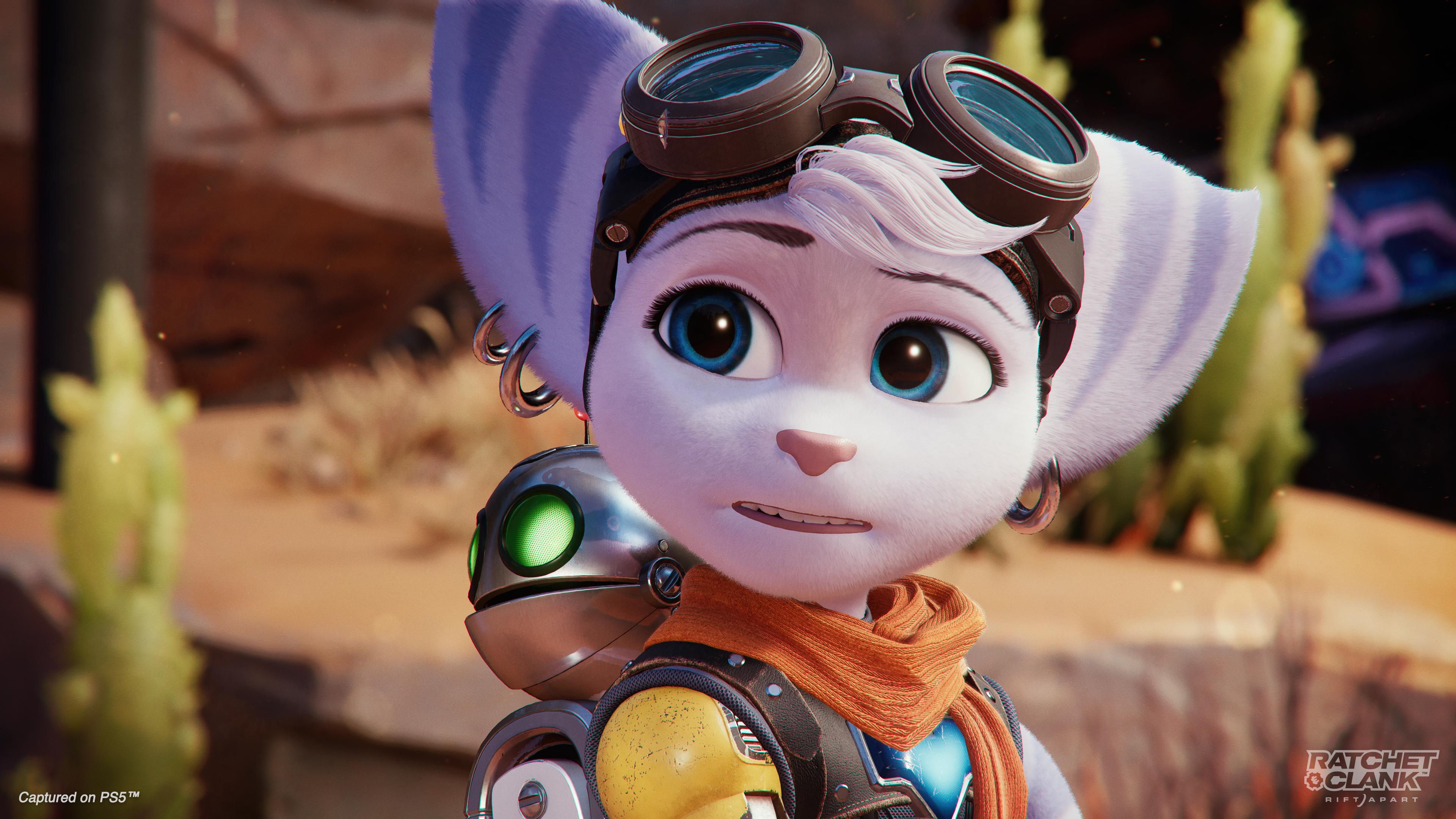 “How exactly do we fix The Fixer?” asks Clank, as Rivet finds the switch to turn it on, we see the massive machine come to life, sullen and depressed saying that “Nothing can be fixed,” before imploding. As Rivet, you move forward again before kicking off an on-rail section where the entire area is crumbling beneath Rivet’s feet, we see wall-running incorporated and the entire set-piece showcases the level of detail the world offers while also going a mile a minute. The Fixer is following the duo as they make their way back to the beginning of the level but not before some encouraging words from Rivet to Clank saying if he’s broken, then so is she. A ploy to get The Fixer to help them but one that works, with the massive robot breathing a sigh of relief and that all is not lost.

Things go awry though and The Fixer grabs Rivet in midair, before Clank, ever the genius says he is fixed and that despite everything, he “is still Clank,” tricking the massive robotic guardian by making him believe that all is not lost as the demo ends.