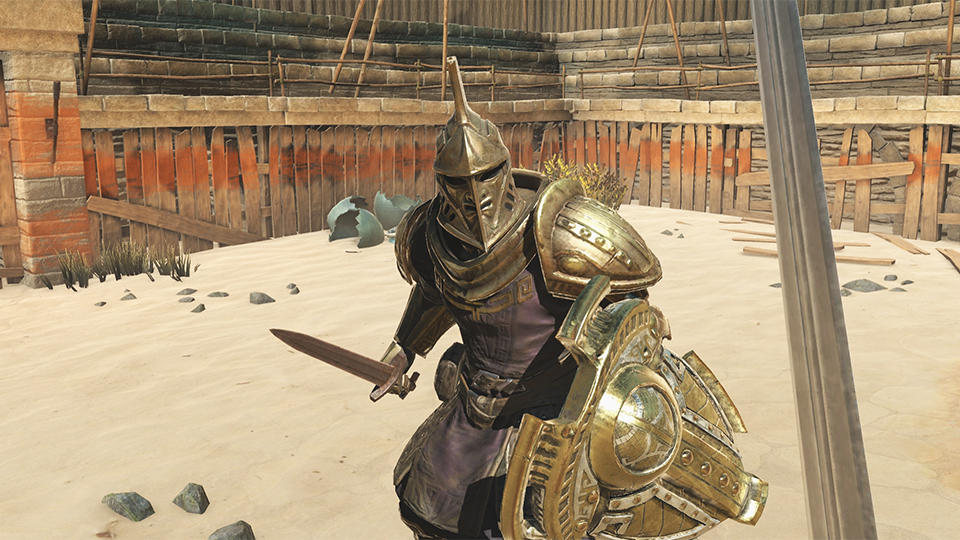 I look back on playing The Elder Scrolls III: Morrowind every so often. Being my first foray into The Elder Scrolls series, the experience was jaw-dropping. Nearly 17 years later, the franchise has continued to evolve and grow in scale. When Bethesda announced their plans for porting The Elder Scrolls V: Skyrim to Switch, it would become the first time you could take the epic-scale adventures with you wherever you go. Unfortunately, the offering never spoke to me as most of the glandular quests within never aligned with the “drop-in, drop-out” proposal. During my time I was set free to explore, complete quests and tweak my already-established character. Right off the bat, it was made apparent that this is not an open-world venture akin to previous Elder Scrolls titles. The Elder Scrolls: Blade is much more scaled down RPG. This makes the game much more manageable to play while on the go and during downtime.

I was able to run through quite a few main quests as each would take no more than 10-minutes each. The Elder Scrolls: Blades is much more linear, devoid of off the path exploration. It reminded me of older dungeon-crawlers but played in the first-person perspective. Tapping the screen in portrait mode, you’ll advance through the linear environments and come across various enemies–– all recognizable from The Elder Scrolls series.

While one could imagine a version where The Elder Scrolls: Blades’ combat had players furiously swiping their phone screens like they were playing Fruit Ninja, Bethesda instead opted to inject some strategy to the combat.

Keeping up with the simple inputs, tapping the screen would cause my character to swing at an enemy. Holding for long enough for a charge-meter to fill up would cause extra damage. Inputting another attack, be it melee or a spell, on the other side of the screen would allow for a combo to deal extra damage. As an enemy came in for their own attack, I was able to block and parry with another tap–– rinse and repeat for each enemy.

Defeating an enemy big or small rewards players with coins to purchase weapons, armour, etc. back in town. After each quest, you are brought back to the game’s hub town. This is where I met new characters and could craft new weapons. The focal point of the story is that after a large attack, the hub town was left in ruin. As the player, you must rebuild the city structures, using the currency and items you collect during each quest. The Elder Scrolls: Blades is a very trimmed down experience, none of the structures I came across had accessible interiors. This also speaks to the level of interactions you will have with the game’s characters. Don’t go into Blades expecting your character to impact the world around you the way Skyrim allowed you.

As I was able to demo the game on the latest iPhone XS Max. I was fairly impressed with how detailed the environments were rendered. The lighting effects were able to cast dynamic shadows. The textures and details on structures and character models felt very similar to Skyrim’s. We are not getting current-generation console-quality fidelity. However, The Elder Scrolls: Blades is one of the more detailed-rich games I have seen on a mobile device. Bethesda is clearly putting the A12 bionic processor’s power to good use. I was also impressed with how smooth the transition was from playing in portrait mode to landscape. Playing in portrait felt more natural, especially during combat portions. Bethesda does a wonderful job filling in the screen top to bottom. I turned the phone, even during combat, the FOV expanded immediately, plus I was given on-screen analogue sticks for navigation. It is hard to determine how much will be scaled back in order to have The Elder Scrolls: Blade running on older mobile devices.

I was unable to demo the other two modes within The Elder Scrolls: Blades. Though, I was told that The Abyss would expand on the dungeon-crawling escapades. The Abyss provides an endless dungeon to explore for rarer loot and currency. The Arena is a PVP mode where two players will be able to fight each other for rewards as well.

I inquired about cross-progression between all three modes and was informed that all rewards and currency payouts are carried over. A weapon you gain from playing The Abyss can be used during the campaign or taken into the Arena afterwards. As for balancing, we will have to see how Bethesda plans on handling that when the Arena mode releases.

The Elder Scrolls: Blades is a free-to-play game. While I was able to see a few notions of monetization model (real-time structure-building vs. paying to bypass the wait time), with any game incorporating microtransactions, waiting for the beta release and seeing the impact it may hold is crucial.

In terms of the stickiness The Elder Scrolls: Blades has, the concept of a boiled down dungeon-crawling RPG speaks to me. Playing the game, I can see the attractiveness of popping in for 10-15 minutes during a commute, completing a quest, levelling up, and dropping out for the day.

The Elder Scrolls: Blades is available to pre-order for early-access.