The power to do what you ask.

Well, to create a roguelike dungeon crawler experience that is far from perfect but is showing great promise.

MythForce is that game, and it’s currently in Early Access on the Epic Games Store.

To catch up, read more about its 80s cartoon aesthetic now.

But for my impressions so far, read on!

Hold the Cap’n Crunch and cartoons

Beamdog is really good at getting you to buy into the hype and atmosphere of a game. If you want proof, just take a look back at all the stuff they did with the Baldur’s Gate refreshes. And it would appear that dedication to building a strong foundation on fantasy and myth is alive and well with MythForce. I mean, just take a look at the carefully-crafted opening video and tell me you aren’t convinced it has all the muscle and power of a He-Man & Masters Of The Universe cartoon.

However, in its Early Access state, this is where the magic shifts to the magic of wanting. 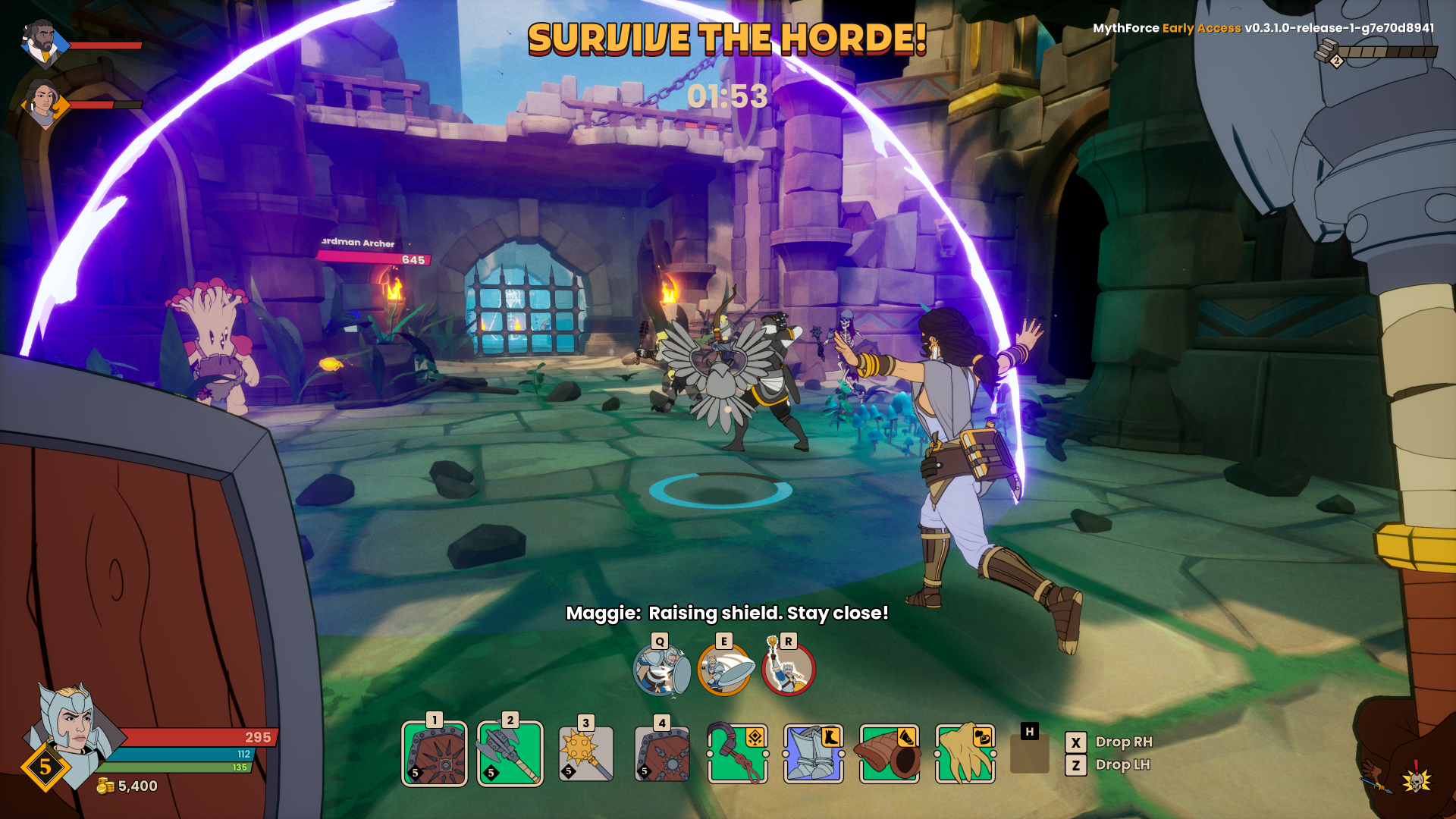 There are four clearly defined and personable charters inhabiting the knight, rogue, mage, and hunter. Each character is vibrantly voice acted and drops one-liners in a few set rooms about how going the long way is better than assaulting the castle head-on. Which is great… except there’s no backstory as of yet given to players on why it’s better than a head-on attack. In fact, it seems about the same when you consider that there’s a menagerie of menaces waiting for you in each new room you enter anyway.

There’s currently only one playable level named “Bastion of the Beast Lord” — the ruins of a grand sandstone hall set in a grove of lush forest. While it’s a pretty cell-shaded setting, it features the same stone chests, fire-breathing gargoyles and altars dispensing buffs or, in rare cases, nerfs. Enemies are currently skeletal remains of soldiers just shaking their bones; goblins rushing you to steal your stuff and then rush away; mushroom men casting overpowered spells, and witches very much doing the same… only far worse! 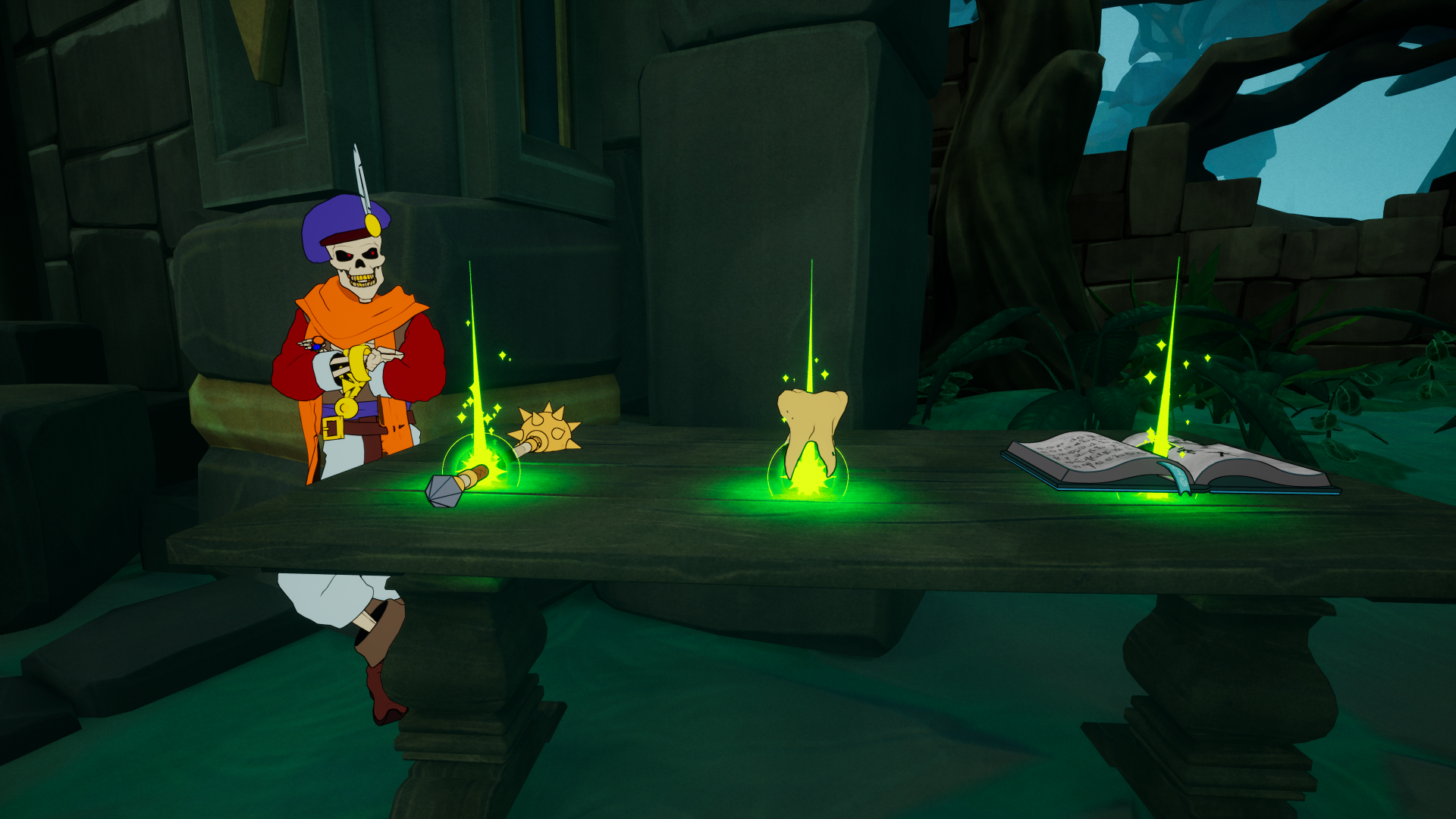 The music is also sparse at the moment as there’s one current background track that sounds less 80’s prog rock and more modern Explosions in the Sky-like post-rock. But it is boosted during combat by a swell in energy, which helps to fit the tension.

In case you can’t tell, I’m an ardent post-rock tinkerer, so I love the music. But I do profess that it lacks the boyish bravado that so much of 80s cartoons had.

The enemies are also not terribly diverse and are over-powered compared to the player, but they fit the 80’s cartoon vibe and entertain, so I am more than happy with them.

MythForce still needs some narrative and environmental polish worthy of that opening, but that should come with the tweaks and episodic updates.

So how does MythForce currently play?

The Solo Tax is too damn high!

The answer is not great if you are a single player.

I generally don’t like playing games cooperatively with others. I think it’s largely because of my fine motor disability. I don’t have the hand strength and reaction time those with a steady hand do, so I often feel as though I am forcing others to carry me. As such, I am used to paying a solo tax when it comes to playing as a single player in a co-op game. However, I am used to game presenting you with ways that don’t break the game but do mitigate the effects of the choice to go it alone. 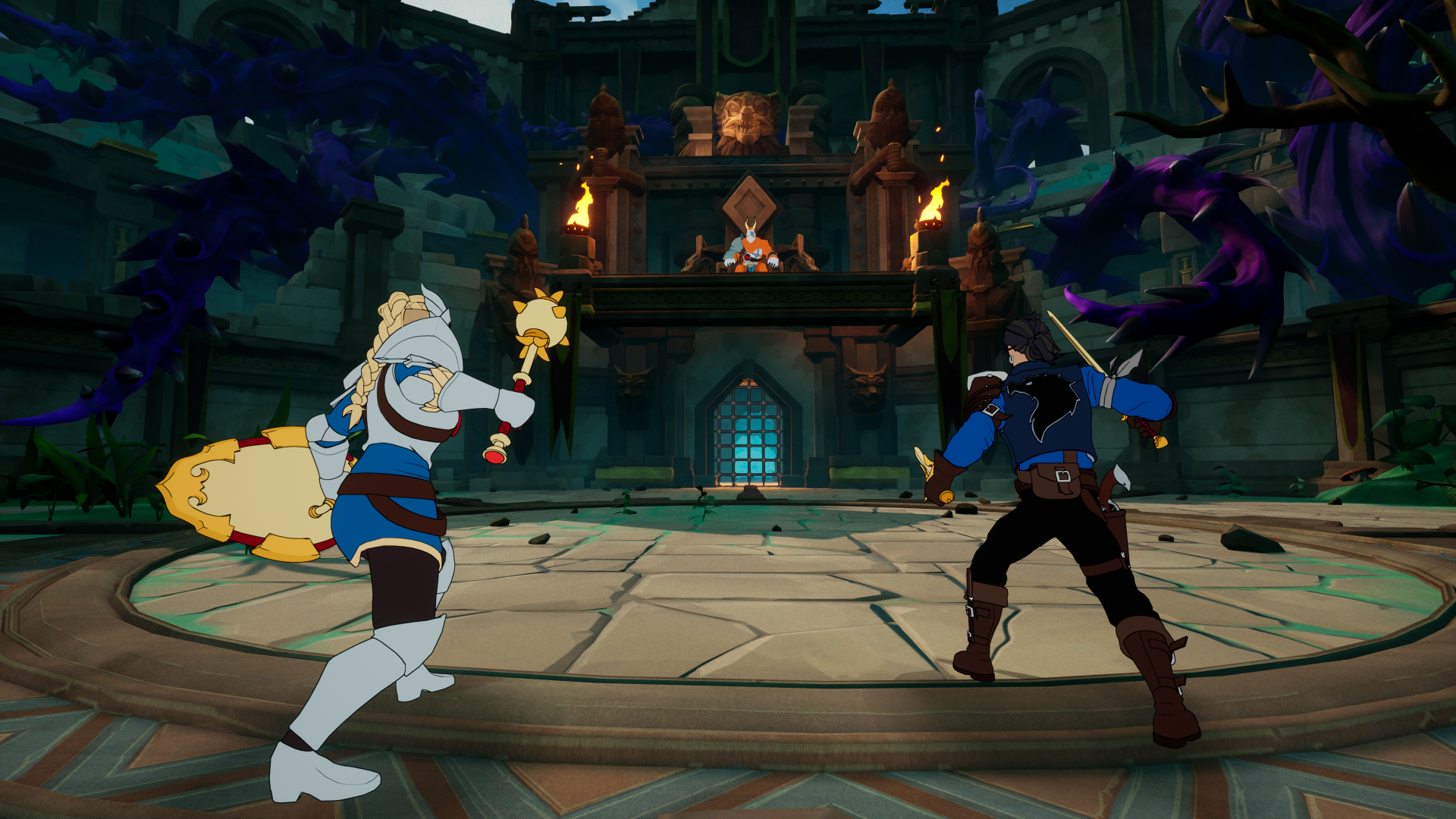 I’ve got a couple public games on my belt for co-op experience now, and I can say that the game is much better when played with others. Our heroes feel less stilted and skills work together to move the game along much faster and with more overall excitement. For example, I quickly found that my rogue’s poking special ability, which is upgraded to drop a speed boost for teammates is so much more effectively used when helping power up the slow-moving knight. And the mage is much more of a team player when her barrier can be used to shield a group from arrows and magic while dealing with enemies that are closer up.

I did notice that the game does run at lower FPS and with some stutters when playing in a group, but it loads quickly and as long as your group stays together and moves as one, there’s no delay or pause in action, which is a really important aspect of playing these co-op experience titles.

As I said, there are four characters available based on the prototypical fantasy hero types.

The knight is slow and able to take and dish out a lot of pain. But on her own, she’s as good as gone.

The hunter is great for keeping some distance and for dealing with the later stages full of ranged enemies, which are a total nightmare! But his speed of attack and need for precision makes him hard to use.

Due to her casting time and range, the mage is all but unusable to single players. While you can hold some baddies at bay with her turret skill, her group shield and casting abilities. I had one playthrough where I also had a magic-resistant skeleton show up. And I was lucky I was carrying a sword at this time so that I could dispatch it. But not before exhausting my very small stamina pool and taking a huge amount of physical damage. 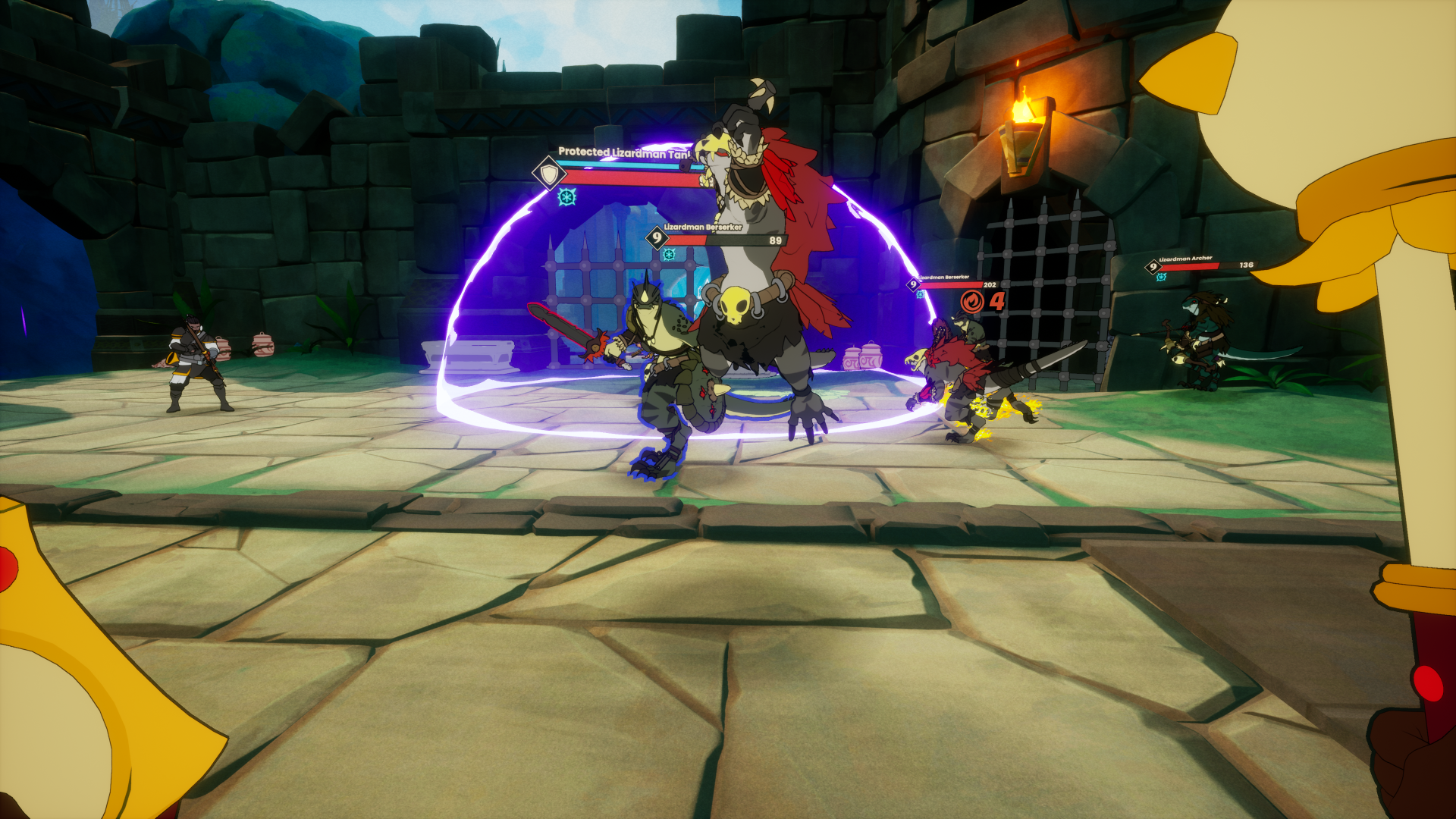 This brings me to my point about dealing with the solo tax. I would love to see players who choose to make the solitary jump into danger at least have the hire ground with things like an increase in stamina, magic, and/or health. Or, at the very least, an increase to their EXP so that they progress faster in their runs and become better able to stand on their own.

One point I will make that I’ve seen mentioned elsewhere, but I would like to build on is that unlike how the mage is seemingly built to operate as team support, the rogue character seems almost like the go-to for a solo player, as he’s far faster than the other classes and generally has abilities like a mass stun and a teleport strike that are very powerful when you are alone.

Healing potions also seem to only be small and only let you hold one at a time, which is a huge addition to the tax. 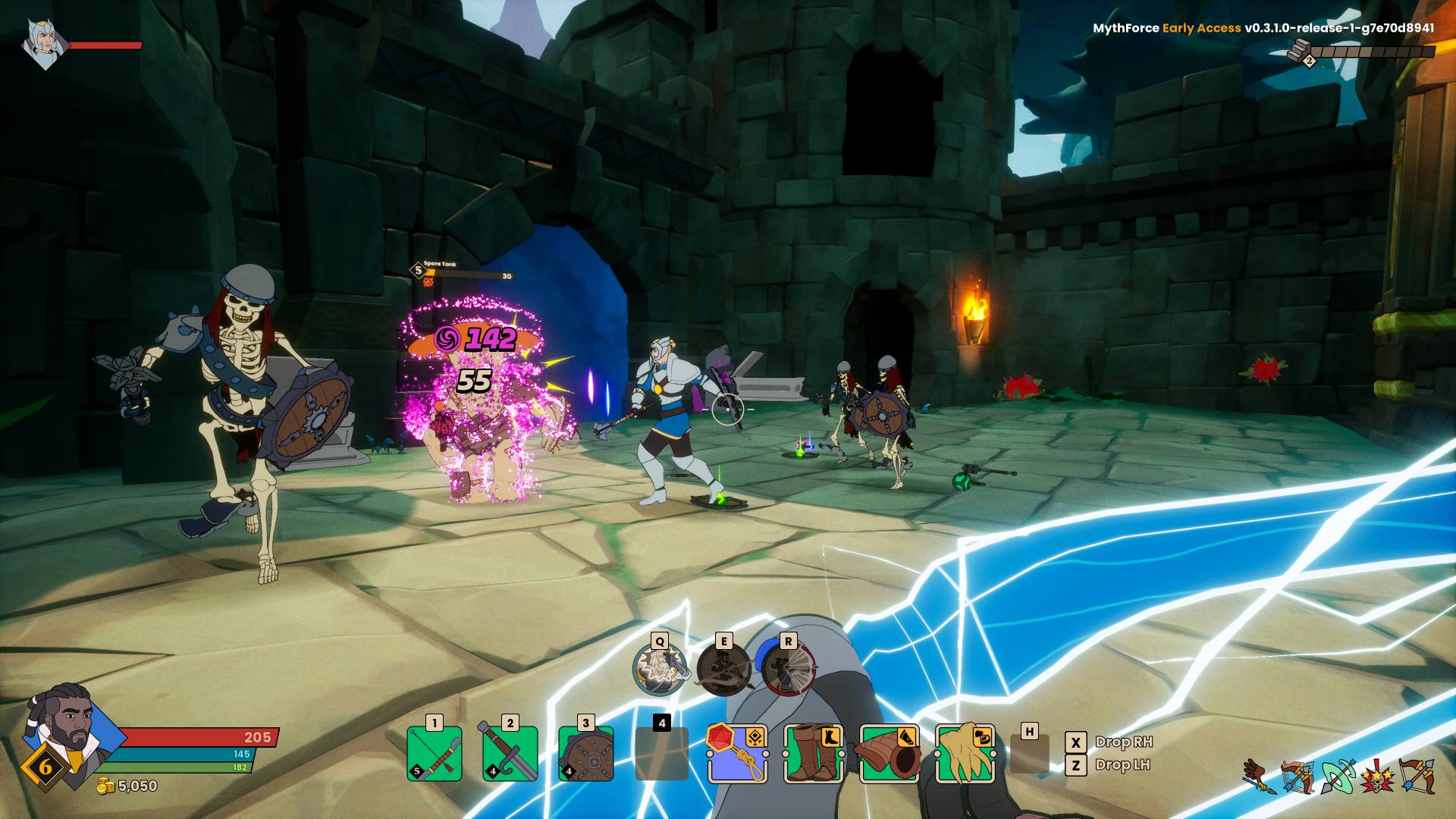 A positive is that any character can be easily reclassed, thanks to the fact that they can all pick up swords, daggers, bows, maces, and magical tomes. Pair that with the level-up abilities which grant players options for building their strengths, and you’ve got yourself a suitable fighter regardless of what you start off as.

Outside of battle, the more you crawl, the more you’ll find artifacts that provide boosts from the get-go, like extra health or mana. There are also character-specific trees of infusions, which let you basically subclass heroes for things like speed or damage builds.

I would personally love to see a random roller at the start of single-player games that gives you an artifact and/or an infusion aside from the ones you already have to add some balance as well as another element of replayability. MythForce has room to grow

MythForce is definitely a roguelike. It fights against you in an attempt to make you feel small and to keep you coming back for more, which is great! It just needs a little more balance and substance if I’m going to keep doing so. Lucky for it, I still remember the days when you had to wait another week or month or even a year for something new to be added or for a conclusion to be made.