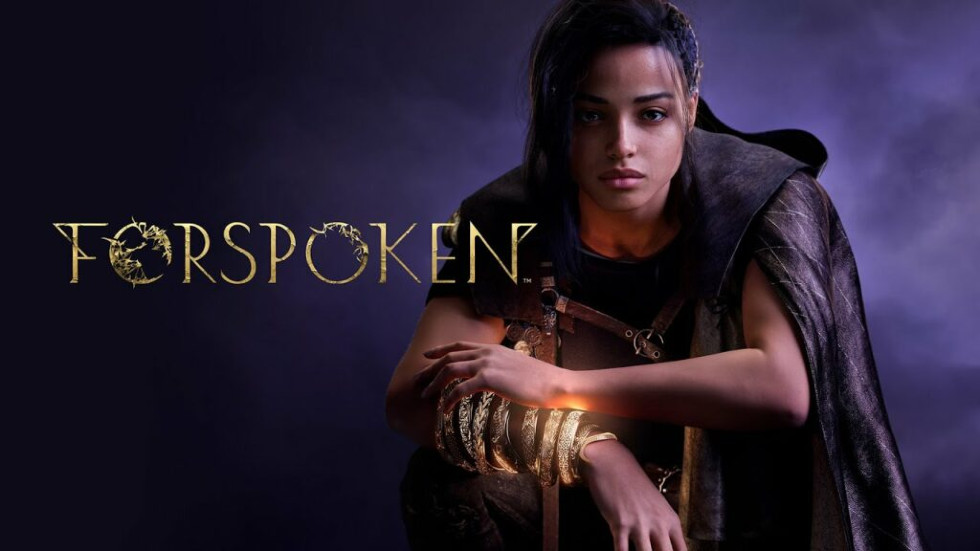 We attended a hands-off digital preview for Square Enix’s new IP, Forspoken. Todd Stashwick and Allison Rymer were on hand to talk about how they came onto the project and what being able to work on a game like this means to them.

We saw a brief introduction that featured Takeshi Aramaki and Yosuke Matsuda, CEO of Square. There is a lot of confidence from the producers and developers going into Forspoken. Luminous Productions was founded to produce the latest game using the latest technology for a global audience using the Luminous Engine.

Takefumi Terada and Raio Mitsuno took us through a demo of Forspoken featuring snippets of the game’s systems at play. It was a brief walkthrough but enough to give us an idea of what to expect when the game launches next year.

Forspoken follows Frey Holland, a woman that comes from a rough upbringing in New York City before being transported to another world, Athia. Frey is portrayed by Ella Balinska, with the actress working with Luminous Productions to create the character together. 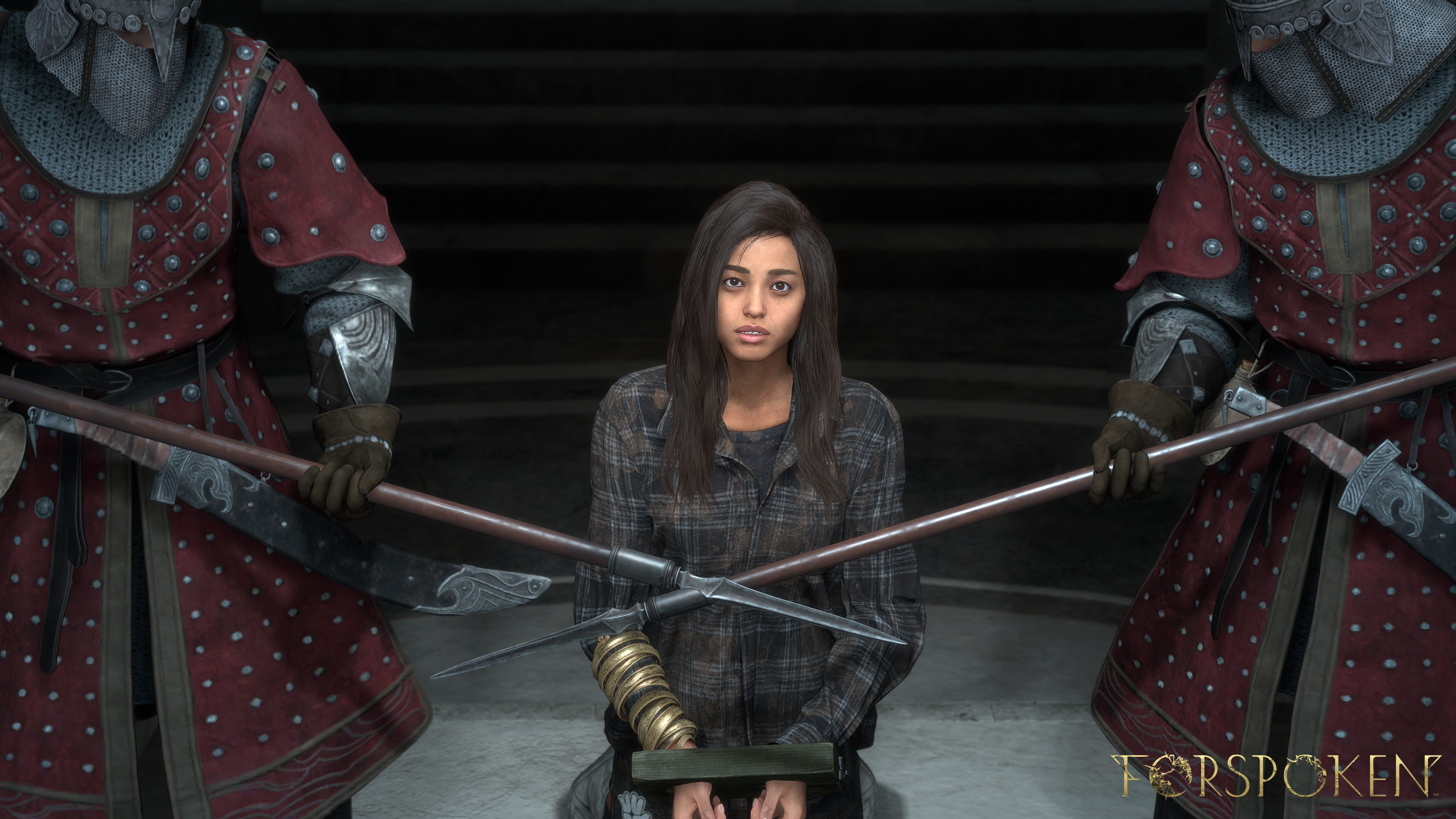 Tom Keegan, the capture director on Forspoken revealed the story of Forspoken s about “tribe and family,” and when he starts a project Tom thinks of themes and how they relate to his life and the lives of the actors. When Tom got together with Ella, they talked about their families and how they were there and weren’t there. This is Frey’s journey in Athia – she’s angry and an orphan. Her purpose in life is to figure out who she is – it is the ultimate puzzle. We all want our own identity and when she goes through the portal she is confronted with the question, “who am I?”

Together, Luminous and Ella worked hard on Frey’s walk, something Tom Keega, one of the developers working on Forspoken described as a “hip-hoppy” walk. When pressed by media on what exactly that meant, none of us were given an answer in a follow-up Q&A FAQ media were handed out. Ella is athletic so they needed to figure out how they could take this and implement it for Frey’s demeanour. Luminous gave the team a lot of slack to figure out the characters and who they are in Forspoken. I’m not sure what “hip-hoppy” is, but I hope we get clarification on what Tom Keegan meant when he said it.

Allison Rymer is the lead writer and helped create the narrative and build the world along with Todd Stashwick. Together the two began to craft this world. With Gary Whitta, the project began in 2018 that soon turned into a major writing project with the help of Amy Henning. The goal was to deepen the characters before the project began active development. The writers wanted to build this world on their own and not on someone else’s terms – “it is a collaboration of many disciplines,” says Todd Stashwick to a group of journalists. 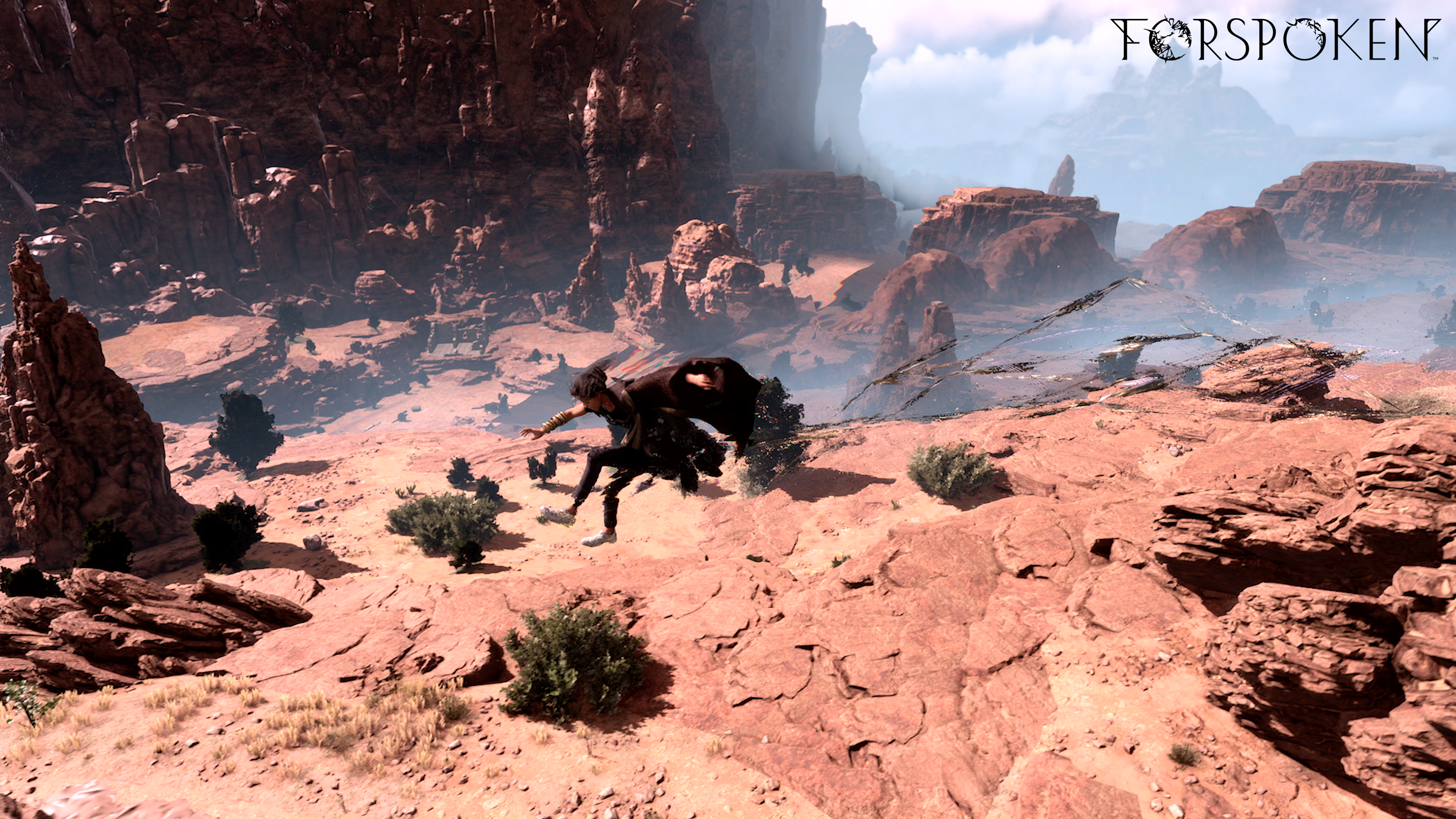 Frey is on the verge of going to prison and is scared and on the run with her cat Homer. Ella has hit rock bottom and wants to leave New York. She is not a superhero in the classic sense, she’s still vulnerable and scared – she’s human.

However, things aren’t exactly much better when Frey arrives in Athia. Due to her powers, people are scared of her and call her a demon. While there are tons of monsters Frey will engage in this new world, it is her reputation that is a real challenge.

Allison’s favourite part of working on Forspoken was being able to write a game about a woman. She was able to show all the sides of Frey and how she’s intricate as a human. Todd’s favourite part was the discovery stages of figuring out the world and the characters, and the moment when ideas come together in an amazing way.

Athia has been consumed by The Break, but there are settlements where people live and are now overcrowded given the world is in ruin. It is here Frey learns of the dangers she must face; the demo shows the doors open to the settlement and the sprawling world in front of our protagonist. Frey’s powers to move around this world are impressive and the team calls it magical parkour.

Only Frey is able to explore these toxic areas – any direct contact with the Break will turn you hostile or kill you. Frey uses her magic parkour abilities and can level up these powers to extend the duration of the move set, the development team tells us.

During our Q&A session, Square explained to us what this calamity was. The Break was an event that occurred in the past that generated a dark blight that would corrupt everything it touched. No one knows what caused the Break but the effects are felt across Athia. 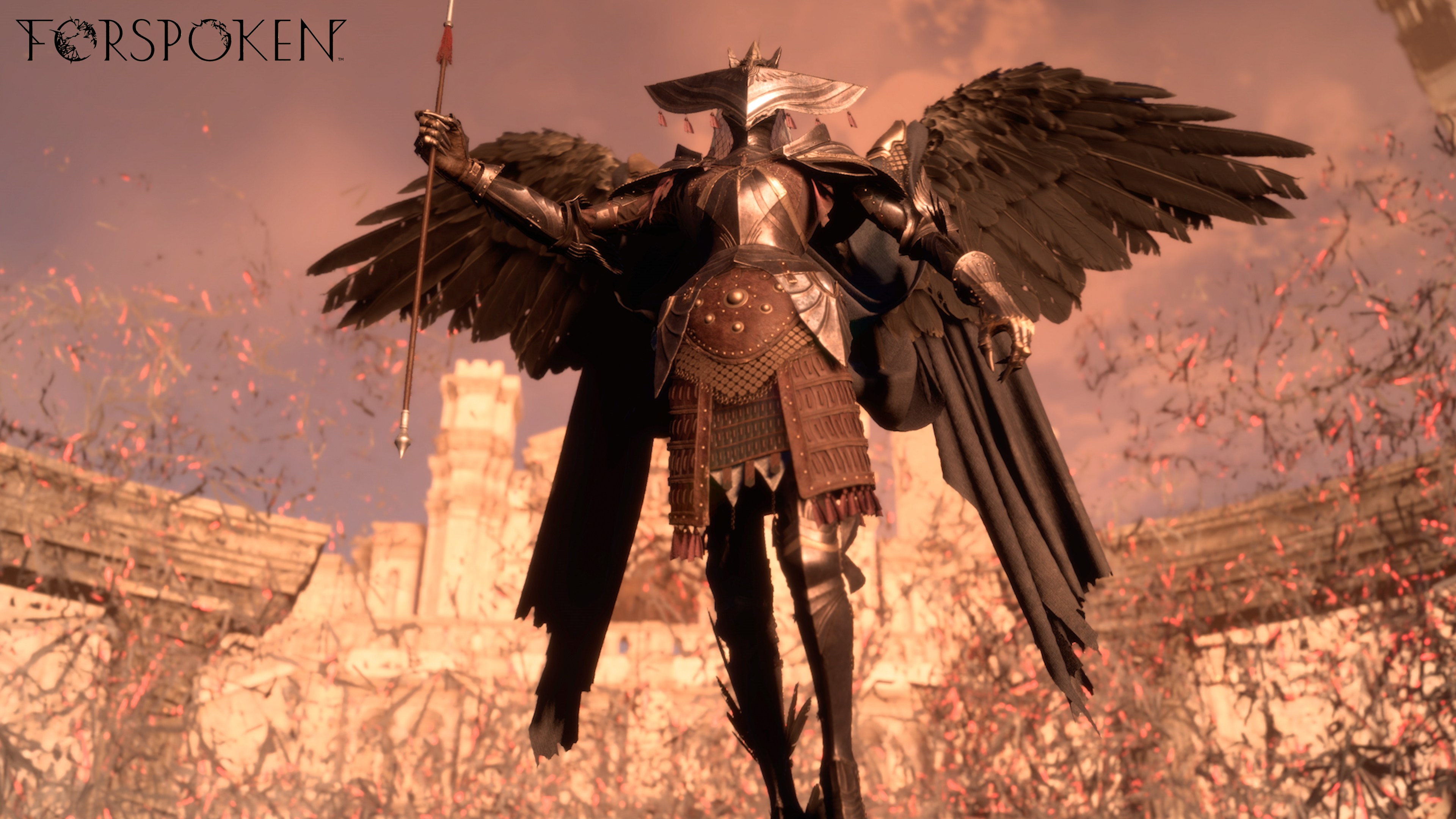 The combat system is magic-focused and includes close-range, long-range and more. She has spells like Dark, Pulse Dart Lv1, Lv3 and so on. Spells can be selected by opening the ring menu that allows you quick access to Frey’s abilities. The stamina gauge is associated with magic parkour.

Elaborating on the Nail system, Square says it is grounded in the magic of around Frey. “We wanted to represent the ability enhancements in a form that’s part of Athian history as well as merging with something that’s relatable to our modern world. The theme of duality is central to Forspoken, and so as players explore the game they’ll come to learn that the Nails are heavily embedded in Athian lore and culture, however, Frey also views them through a modern lens (much like we would).”

Inspiration was drawn from Ancient Egyptian and Ancient Babylonian societies where painting your nails related to status and power. 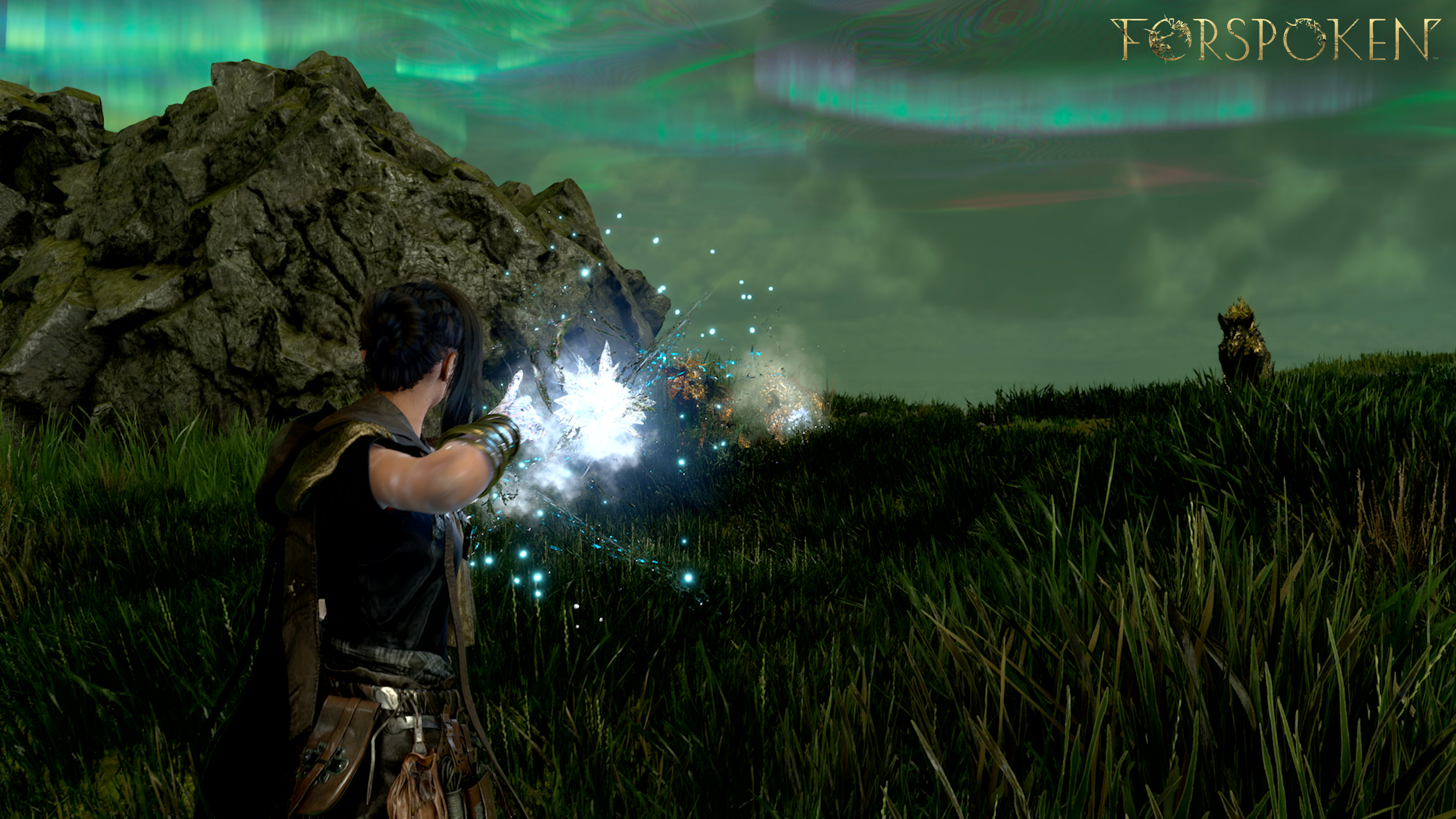 Enemies can hit from a distance so learning to pace yourself is key to survival. Using magical parkour in battle comes with advantages. Frey can summon what looks like an icicle crossbow and shoot the bolts at enemies.

Something I’m sure some will appreciate is Frey’s sailor mouth when in battle. Allison and Todd, the lead writers wanted to make Frey relatable, to really show her complex and raw personality. Frey’s vulnerable side tends to show when she’s in battle and in situations out of her control.

This led to the writers creating banter between Frey and Cuff, her companion who also sheds light on the world of Athia.

Magic parkour allows Frey to move vertically and horizontally, or control gravity to break your fall. Walls are only hurdles to leap over and players can explore Athia as they please. Controlling Frey through dynamic environments is a ton of fun says the developers and look forward to showing players more.

Shelters are safe resting spaces around Athia where you can craft or upgrade spells. Frey can upgrade gear and items or restore health at these locations. Think of the benches in Final Fantasy XV where you can take a reprieve from battle and rest up.

The People of Athia

Cuff is someone Frey speaks with throughout the demo but it is unclear what their relationship is. From what has been shown publicly, Cuff is a sentient bracelet Frey wears but where she acquires it or what its true purpose is, has yet be to be discussed publicly. From what was shown, Frey speaks to Cuff and even advises when in battle but outside of that, we won’t know more until Square decides to show us more or when the game launches. 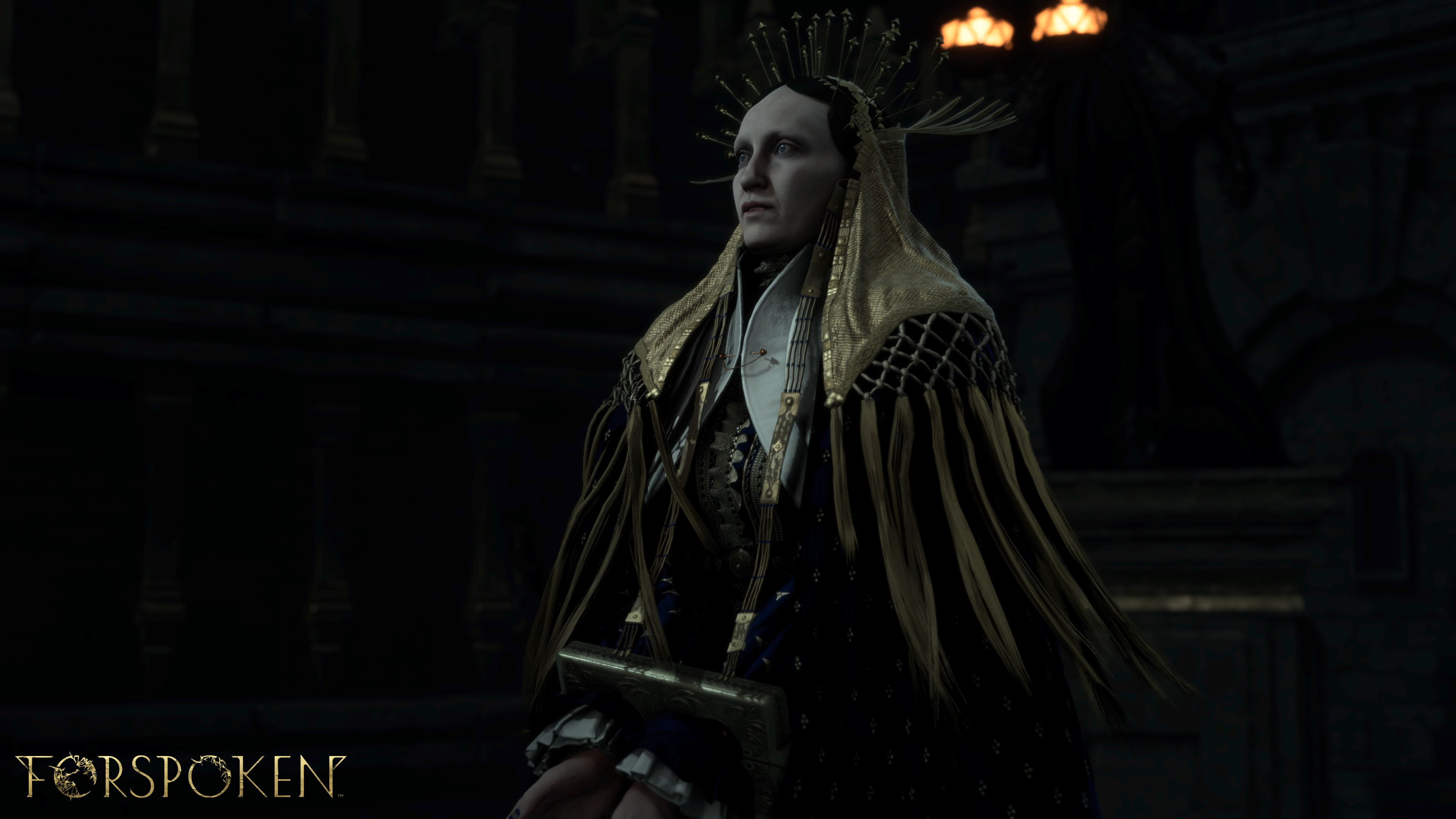 With Athia being a Matriarchial society, we will come across the Tantas, evil sorceresses who rule this world. Before the Break happened, the Tantas were benevolent rulers who reigned with dignity and virtue.

We see one final demo before our preview ends where the area in Athia is in the midst of a Break Storm, a storm that warps everything in its path. Frey must survive but she’ll have to take down the monsters that are born of the storm and it’ll take everything in her arsenal to stop them. These are known as being some of the most dangerous encounters in the game and should not be taken lightly.

There are all sizes of monsters in the Break Storm but there’s a massive one that appears and will kill Frey if she isn’t careful. Our preview shows Frey being unsuccessful in her attempt to weather the storm and I’m excited to see how these storms play a role in the story.

What was shown was a work in progress so while the graphics were rough around the edges, I am looking forward to seeing how the developer polish up the visuals. My time with Forspoken didn’t showcase many of the environments of the game, we got a few desert-inhabited areas and craggily rocks for magic parkour to shine. 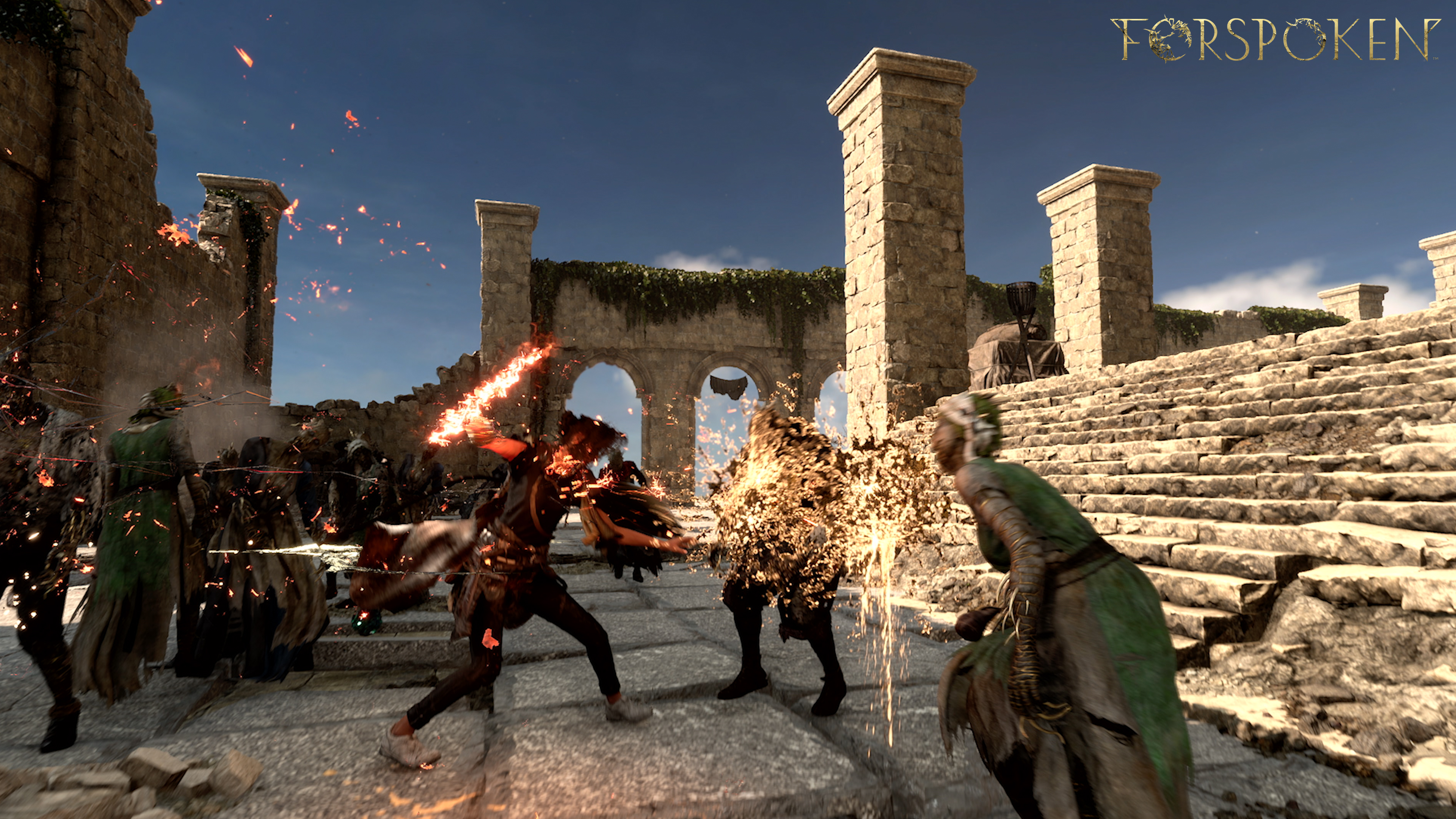 A good question that was brought up during our preview event is the decision to create a big-budget game with a black woman as the star. When casting began, a strong female lead was always the choice. Square wanted an actress reflective of the diverse audience playing these games, so Ella Balinska was chosen because she embodied the team’s vision of Frey.

Forspoken has always been on my radar and after seeing a bit more of the upcoming title from Luminous Productions, I am intrigued but there is much work to be done until launch. I can see some relation to Final Fantasy XV given how familiar a lot of the gameplay elements feel even if they are not as similar by looking at them. I am in the camp that the last numbered entry was a ton of fun, even a bit disjointed but the battle system in Forspoken feels like it drew from the work of Final Fantasy XV.

We won’t have much longer to wait as last week during The Game Awards we learned Forspoken would launch on May 24, 2022.