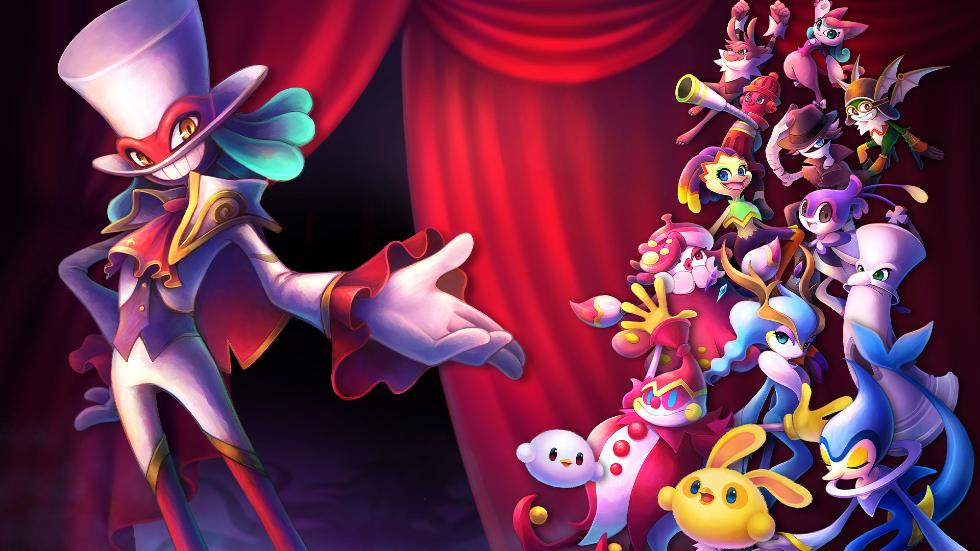 Former Sonic Team producer Yuji Naka returns with his latest game, Balan Wonderworld. I’ve been a fan of Yuji’s as he was a big part of the development of  Nights into Dreams, Sonic Adventure, and Phantasy Star Online.  This week a demo will be made available to the public but I was able to go hands-on over the weekend to try out the game.

After starting Balan Wonderworld on PlayStation 5, I noticed the game no dub available in the demo. I’m not sure if this will carry over to the final game but I’d temper expectations if you were hoping for a dub – I could be wrong and this may come later at launch but it isn’t a huge deterrence by any means.

You can select to play as either Emma or Leo and choose their hair colour. I picked Leo for the demo and if you have a friend to play with, they can play as the other character. As soon as you hit confirm, your character is whisked away to Balan Theatre, where you meet Balan, who wondrously introduces himself to you. Balan as a character reminds me of The Mask with hints of Willy Wonka, he’s extra and always looking to put on a spectacle. After a brief introduction, I made my way to the first world available, out of the three available in the public demo this week.

World One is set on a farm, made up of rolling hills and giant crops. This mysterious world is woven from the memories inside Jose Gallard’s heart, a farmer whose beautiful cornfield is struck by a storm.

In each level, you’ll need to find and collect the hidden Balan Statues. These items are needed to unlock more worlds and progress so you’ll likely return to stages to find all the collectibles hidden throughout. Finding them is never really a challenge in itself because the gameplay is so simple. To progress and unlock more worlds, you’ll need to initially discover eight Balan Statues to get to the next world with more being needed to unlock the dreamworlds of other characters. 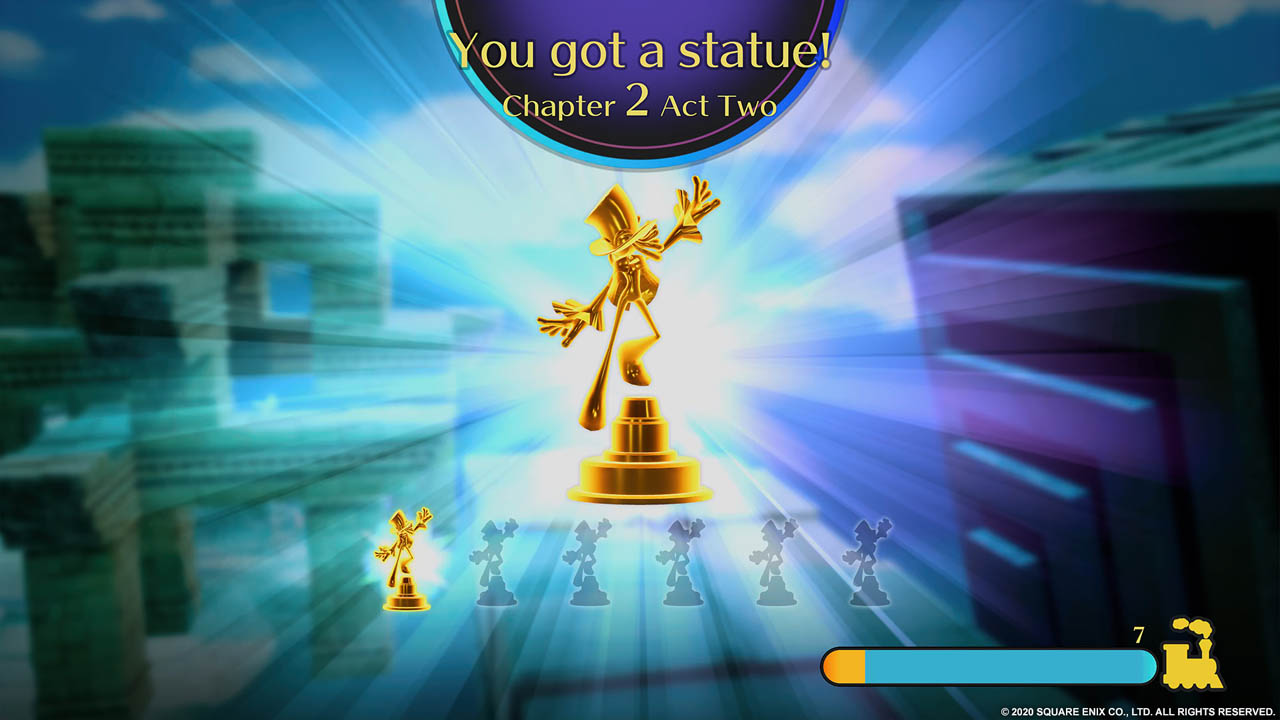 The Man Who Rages Against the Storm

I played through World 1, having completed Act 1, Act 2 and a boss battle. To unlock the other worlds available in the demo, you need to collect 10 Balan Statues which open up Act 1 of World 4 and Act 1 of World 6. The first world reminds me of how the mechanics of Inception’s Dreamworld are perceived: World 1 isn’t flat and you can watch it fold in on itself as you move throughout the level. World 1 is set within a corn-themed world and you’ll need to collect various coloured teardrops that are then used to feed Tims monsters that resemble the Chao from Sonic Adventure.

World 1’s boss is a wind elemental wolf named Barktholomew, corrupted and transformed by Lance, a tall and thin figure with negative tentacles protruding from his body. Barktholomew shoots tornados and green fire and you’ll need to dodge these attacks before dealing three blows. The first section starts easy enough as the wolf tries to bodyslam on top of you and using the tornado wolf’s uppercut move to damage the boss. It’s an easy encounter that sets the tone for bosses going forward. 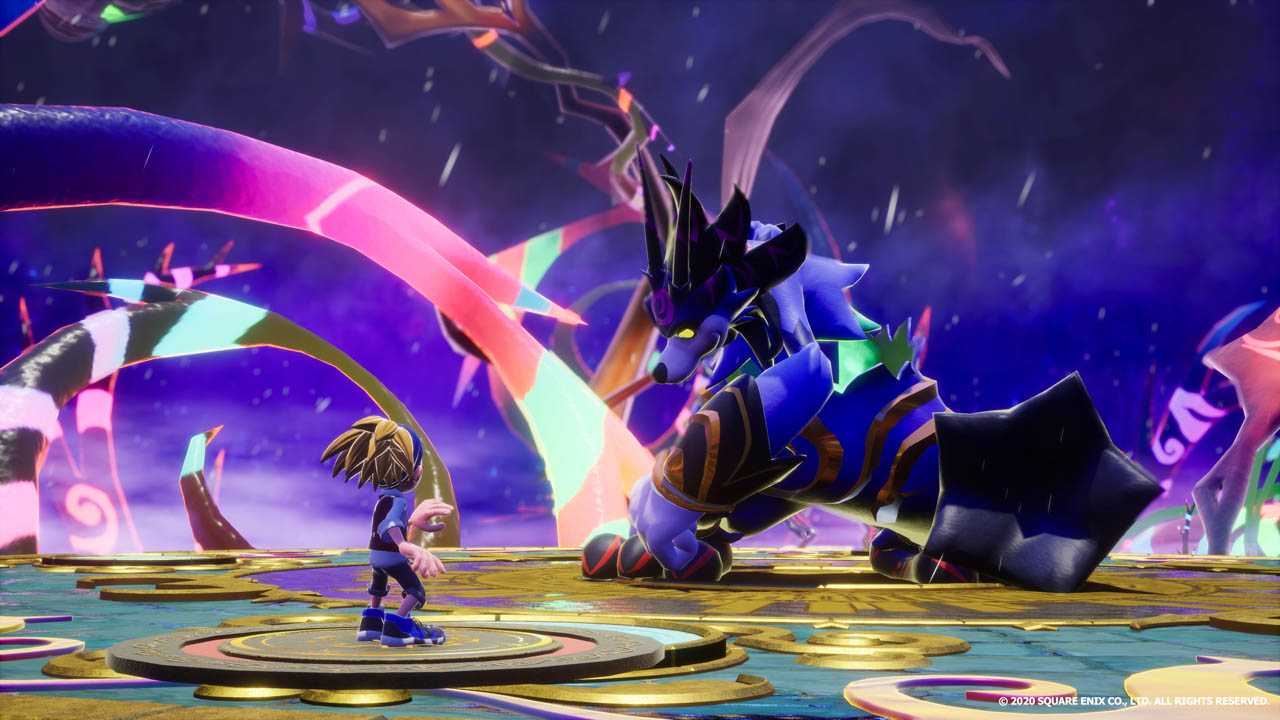 After you defeat the boss, you and Jose Gallard team up and dramatically break out into a dance number while the farmer’s crops are restored.

From here you head back to the main hub area which is how you’ll move between several worlds. In the middle of the hub is the Tower o’ Tims, and the Tims are needed to unlock the tower, which I’m not still sure it is or what the purpose of it is at the moment. The first level requires you to collect 50 Tims, then it doubles to 100, 210, and finally 500 Tims. You can somewhat interact with the tower by using an elevator to move a level up but I found nothing when trying to interact with it.

Speaking of Tims, you’ll use the teardrop gems to feed them. These teardrops can be fed to Tims in order to evolve them to have different colorations and abilities. Tims have different specialties depending on their colour, so it is important to breed lots of different kinds. For example, red Tims are useful for attacking, while pink Tims will sniff out items for you.

The Boy Who Would be One with the Wind

World Four takes place in a fantastical setting born from the heart of Chang Haoyu and his love of the open sky, where bicycle parts and floating islands of all sizes are scattered through the sky.

In Act One you can play as a Soaring Sheep which glides on air currents. Aero Acrobat allows you to lock on to enemies and balloons and unleash a kick. I found this world to be much better than the introductory level as it offered better platforming but I’m torn on how simple the game is and who this is catered to. 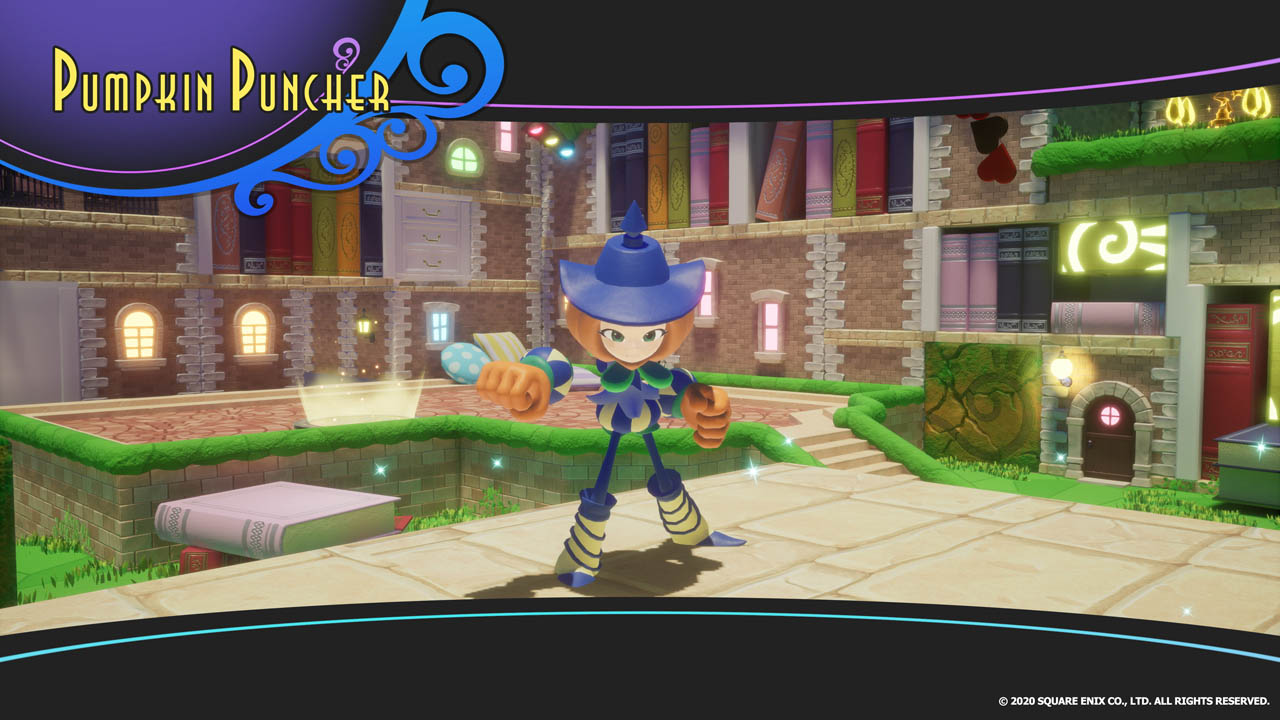 The gameplay is pretty basic and you can store up to three costumes. You can also swap out the one you’re wearing with another, replacing your current hat. The Tornado Wolf, for example, use a spin that acts as a jump as well. Choosing the Jumping Jack costume allows you to kick your feet and get across gaps. Or you can choose the pig to slam down on enemies or switches. Another one is called Elastiplant, which allows your body to extend when holding X.

Another power I unlocked is the Pumpkin Puncher, when you press X a rocket-powered punch flies out to knock enemies out. I found about a dozen of these power-ups throughout each level. To unlock these moves, a key is needed to unlock the crystal that holds said power-up. I did notice that the power-ups can be collected and swapped at certain checkpoints throughout a level, so some backtracking is necessary to collect all the Balan Statues in previous worlds with newer costumes. 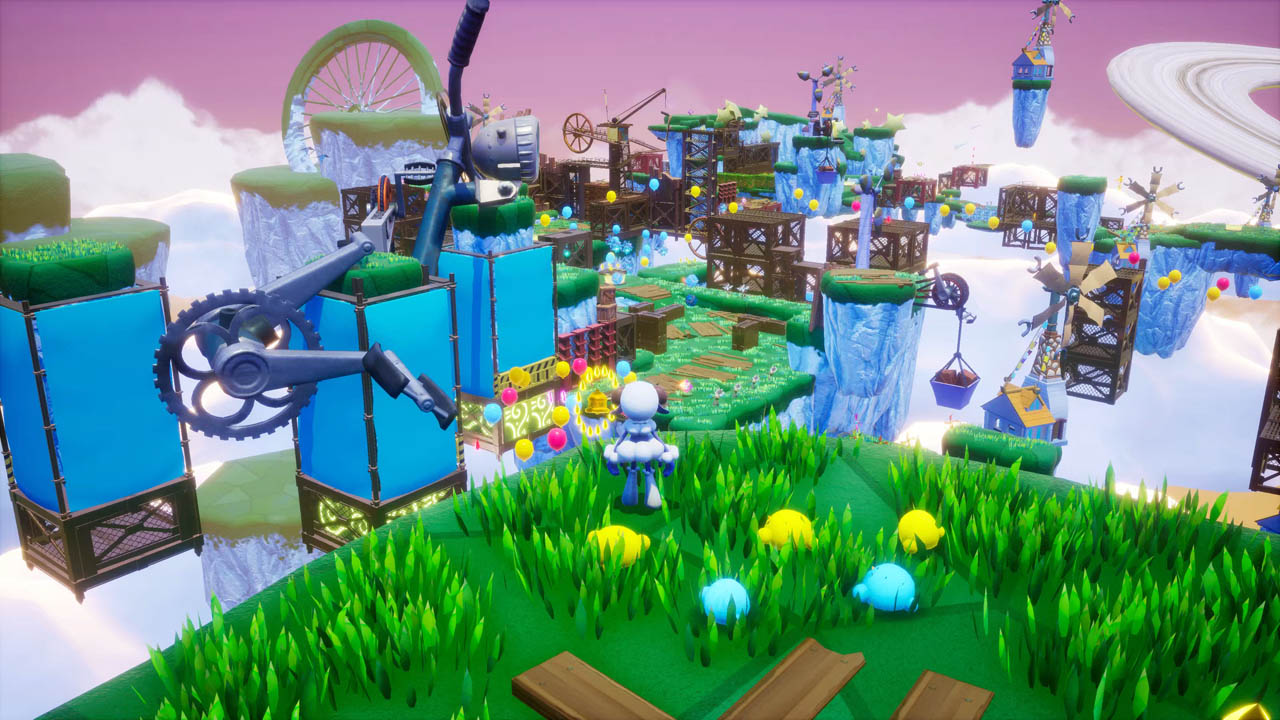 Other things like a soccer ball might appear in a level and you’ll turn into a soccer player momentarily and score goals by hitting golden tiles. You press X to charge your shot and build your meter, tapping x again when the meter and power line are together with the intention being to earn more teardrop gems.

If you find a large Golden Top Hat, you’ll initiate a mini-game called Balan’s Bout where you’ll need to find your button press to get. Balan’s Shadow as close to his picture as possible or tap X as many times as possible before he kicks an enemy. I don’t understand the point of this mini-game but you’re graded from bad to excellent and you earn teardrop gems based on your performance. 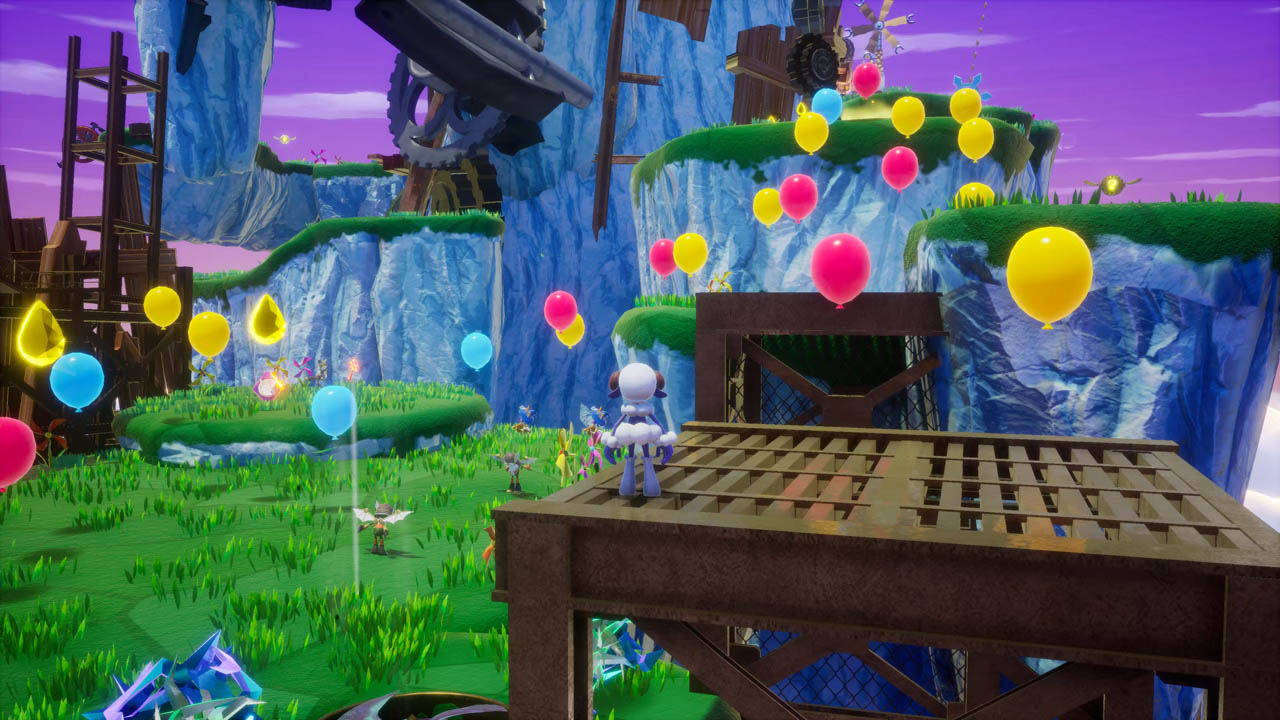 Balan Wonderworld is whimsical but a bit stiff

What I mean is that Balan Wonderworld initially comes across as a very basic game that feels out of place. I think 20 years ago this may have been a much bigger game than it may be today, and I could be wrong when it launches in March. However, when you have so much competition, setting yourself apart from the others is crucial to stand out and I’m not finding that here. I could be wrong when the final game hits shelves.

If you’re looking for something to scratch the Nights itch, then this is certainly made with you in mind and you’ll likely have a blast uncovering all the costumes and exploring the dreamworlds. For me though, I’m left wanting more from the game and I had some fun with the nearly two hour demo. It just feels like a game out of its time and you see it in the animations and gameplay.