Debuting later in November, Assassin’s Creed Valhalla is described as the “ultimate Viking fantasy”. With sharpened axes and wooden shields in hand, you’ll venture through a 9th century England as Evior, the leader of the Raven clan.

In recent iterations, we’ve seen the Assassin’s Creed franchise tackle Egyptian and Greek mythology. Valhalla bleeds Norse mythology and basks in the history of the Viking invasion of England. As the war between Vikings and the Anglo-Saxon boils over, you are tasked with leading your clan to victory while building your settlement out in this new home of yours.

Having been given an opportunity to play a demo of Assassin’s Creed Valhalla ahead of its release, we sat down for an extensive hands-on preview that took place in the Ledescestrescire territory.

Home is Where the Heart is

Similarly to Assassin’s Creed Odyssey, you’ll have the option of playing Valhalla as a male or female version of Eivor. Seeing as though both Origins and Odyssey offered incredible female protagonists in the story, I was immediately compelled to choose to play as the female Eivor, voiced by Cecilie Stenspil. 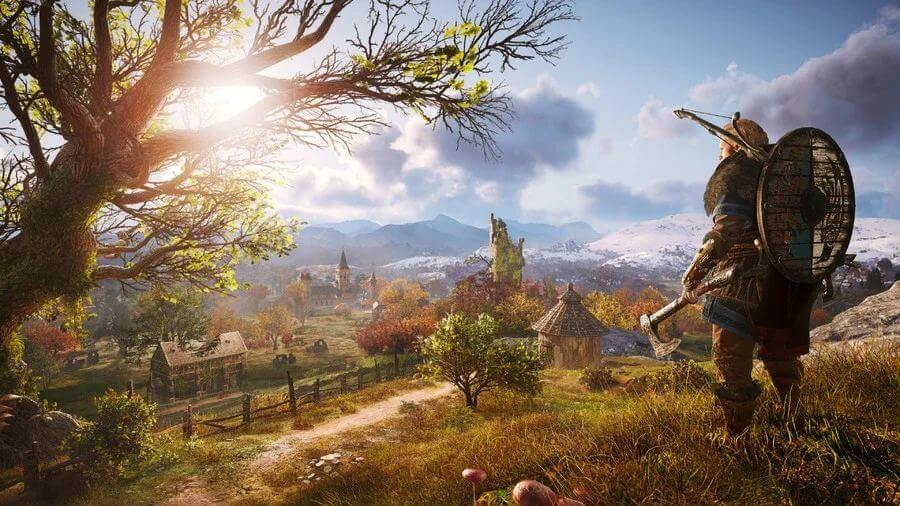 My preview began in the Ravensthorpe settlement, which acts as the game’s hub. Exploring the grounds, I had the option of speaking to the local blacksmith to upgrade my weapons and armour. Eivor is fully customizable with hair and tattoos options available within the settlement. Although Eivor was already sporting a braid, I could opt for a shaved haircut. Additionally, I could add some Norse-inspired ink to her face, arms, and back.

Ravensthorpe is your home. As a Viking, Eivor is not welcomed in other settlements around England. Upgrading the Ravensthorpe to be a successful settlement will reap many benefits as the game progresses. The settlement plays a crucial role in the narrative and gameplay. Having led the Raven clan from Norway, Eivor and the settlement community have begun to build their home on the grounds. However, as the story transpires, there’s still a lot of work to be done. As you speak to community members, certain ones will ask for you to donate crafting materials to build new establishments for the community.

For instance, I came across a fisherman’s grandson. The child told me that he would pay me for any fish I brought to him. However, before being able to do so he informed me he wished to see me build a Fishing Hut for his grandfather to conduct business and unlock the Fishing Line in my inventory. The same can be said for the Grain Farm. Building this would grant a +3 Armor buff for Eivor. The Stable can be upgraded and used to improve stats and appearance of Eivor’s horse. Additionally, Ravensthorpe includes a great hall with a war room inside. It was here that I spoke to Randvi to be shown the Alliance map and took on my first quest.

Travelling to a nearby township of Repton, I met companions Ivarr and Ubba. Together, they introduced me to Ceowulf, an inspiring king, looking to stage a coup and take over the throne over Burgred of Mercia. Eivor is then sent to Tamworth where a full siege is transpiring. Knocking on the doors to find Burgred, Eivor joins to assist in this final stand. The political game of chess is a staple of the Assassin’s Creed franchise and to no surprise, it’s here in full force. Ceowulf wishes to be king as the prospect of peace in the territory seems unimaginable. Assisting him appears to be the best course of action.

The mission structure in Valhalla feels roughly the same. It’s very familiar from a top-down level. However, with the focal point being the Anglo-Saxon war, everything feels grander. When arriving at Tamworth, you lead a charge through the gates. Using a ram alongside other soldiers, we breached through the gates in the conquest of the crown. Fire and the sound of clashing weapons met me beyond the gate. This was a shining example to show that Assassin’s Creed is not the story of a singular character but that of the Vikings who have landed in England, hoping for a better life.

While the siege on Tamworth was a success, Burgred fled, leading me to a string of missions set on tracking him down. From there, I was able to continue exploring Ledescestrescire to complete my goal while taking on side missions and completing activities in the open territory.

The political intrigue brewing in Valhalla’s narrative is enticing. We’ve seen Nordic narratives in games become more popular, but with the mythology pushed as the focal point. To be led down a path of historically inspired stories, featuring known figures of the time, I wanted to continue playing more. I want to see how Eivor’s story unfolds in unexpected ways. Assassin’s Creed never shies away from instilling some far-out interstitials throughout the story. To see how Valhalla will incorporate known mythology with its own Isu tie-ins should be a draw to long-time fans of the franchise.

A Viking Life is the Life for me

Assassin’s Creed Valhalla feels very much like a Ubisoft game. While the settlement system is a huge divergent for the series, the familiar elements often seen in Ubisoft titles are featured. The map was littered with optional activities and viewpoints to climb. 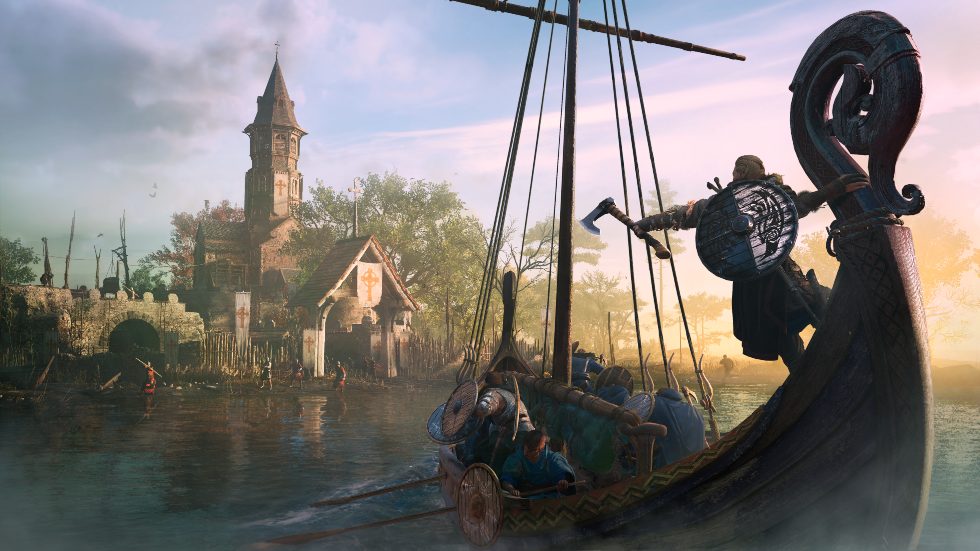 To navigate the map, I had the option to travel by boat down the many rivers in the area. While steering the ship, my crew could sing me Skaldic songs and tell me stories to fill in the moments of silence. Similar to Assassin’s Creed IV: Black Flag, the Skaldic songs became earworms that rung in my head long after my playtime concluded. Additional songs could be unlocked by finding song and story pages in the open world, similar to the Almanac pages in Assassin’s Creed 3. You can also travel by horse as well.

Based on the accessible area I was free to explore, there is no shortage of activities to complete. World events are in abundance through the map. These activities typically saw Eivor complete small puzzles to help a villager or unlock a stash of crafting materials. Stranding Stones are another puzzle element where Eivor must use the Eagle Vision to align symbols carved into large, towing stones to match the required pattern.

One of my favourite activities was Fly Agaric activities, which saw Eivor eat what could only be assumed to be magic mushrooms. She was then sent on a strange trip to herd seals into magic portals. Yes, you read all that correctly. This brought a lot of levity into the game and had me chuckle at the absurdity of it all.

Flyting was another memorable optional activity. For the uninitiated, Flyting is a Norse rap battle of sorts. Conducting a Flyting challenge, Eivor went up against another Viking in a poetic slam battle. The opponent read off a line of insulting dialogue and I had to match the rhythm of said dialogue with an equally insulting phrase. Doing so correctly would win over the judge.

It’s not all fun and games in England, however. Large scale battles could be conquered. In order to collect some much-needed crafting materials for weapon and settlement upgrades, I could head over to complete Raid activities. These saw Eivor and co. attack enemy forts, disabling the opponents. The sheer scope of Valhalla seems to consistently point to an emphasis on larger combat scenarios. 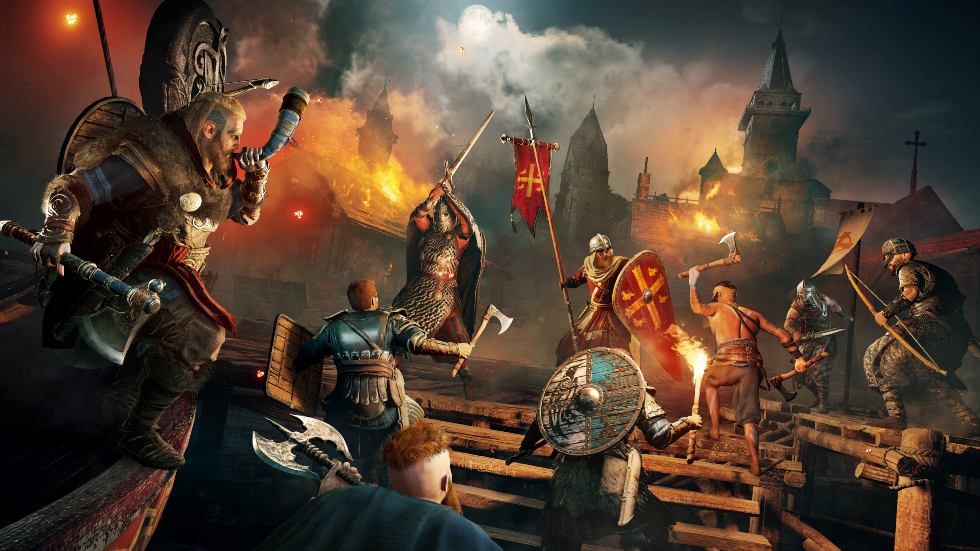 Assassin’s Creed has often established a lone mercenary to take down a cloaked evil entity whether it is Templars or otherwise. Valhalla appears to have more unification between the Raven clan. While this only based on a small sliver of the game, I did enjoy seeing Eivor accompanied by other soldiers and allies.

Much of Valhalla’s combat system carries over from recent Assassin’s Creed titles. Dual wielding is introduced, meaning Eivor can rundown opponents with two axes in hand. However, that comes at a cost of defensive plays. A shield can be used to block incoming enemy attacks and can help parry enemies to stagger them.

Stealth is still a component in combat. Though, as Assassin’s Creed continues, being a traditional assassin is less of a focus. Eivor can still creep through high grass and assassinate opponents or climb nearly everything to get the drop on an unsuspecting soldier. That all being said, I feel as though the emphasis is mainly on the ‘Creed’ aspect. Eivor and the Raven clan are a tightknit group of Vikings that wear their heritage on their sleeve. While the narrative will undoubtedly expand on the “Hidden Ones” backstory and assassin origins, Eivor is a warrior first and foremost.

Eivor is a weathered Viking warrior but improvements to his or her skillset can be made. Like recent Assassin’s Creed games, Valhalla features an in-depth upgrade system to weapons and skills. 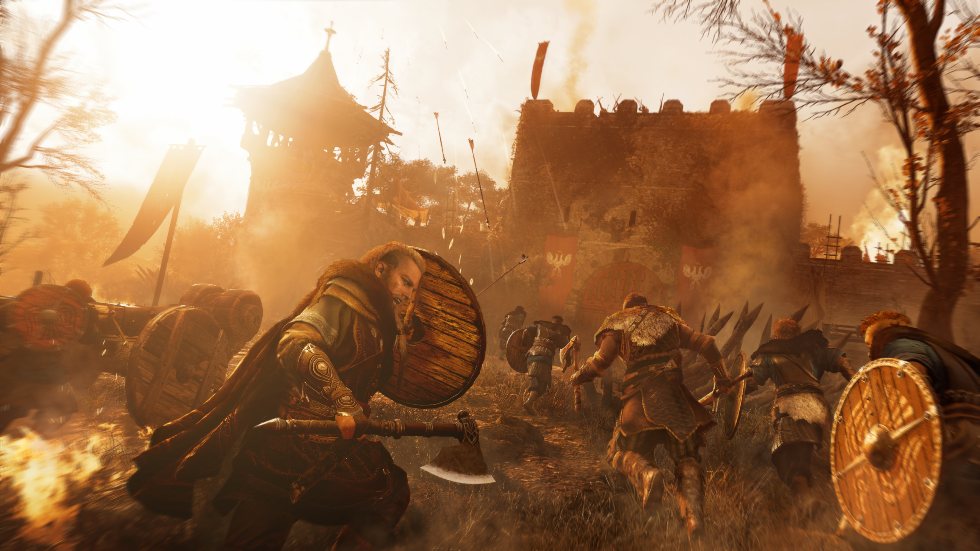 My demo already set me up with some balanced weapons and skills, made for the area I was in. One of my absolute favourites was the ‘Rush and Bash’ ability, which saw Eivor charge an enemy with her shield, knocking them down. Another, once activated, let Eivor throw three axes into a series of opponents to do chip damage to their health.

Venturing into the skill trees, the number of options was staggering. The more you unlock, the more you improve melee damage, defence, and ranged weapon attacks. By discovering Ability books throughout the map and levelling up organically, I could use skill points to customize Eivor to my personal playstyle.

One aspect I was not in favour of is the health regeneration system. In order to heal while in battle, you must have food in your inventory. Food items can be picked up or purchased. The amount of healing you have is shown on the game’s HUD. This is an added system that didn’t necessarily improve anything from a gameplay perspective in my limited time with the game. Perhaps I’ll feel differently upon playing the finalized version.

Assassin’s Creed Valhalla is just around the corner. It’s painted as the next step forward in the soft reboot series and expands on previous systems in play. While the curtain is slowly pulled on the “assassin fantasy” model, the Viking fantasy comes to play in a big way.

Valhalla promises a larger scope in combat with an interesting backdrop in Norse history. The settlement system is by far the most interesting addition in the game and amplifies the RPG mechanics instilled in Eivor. A day in the life of a Viking may not be glamorous, but from my six hours with Valhalla, it sure is rewarding.

Everything Apple Unveiled During the Hi, Speed iPhone 12 Event