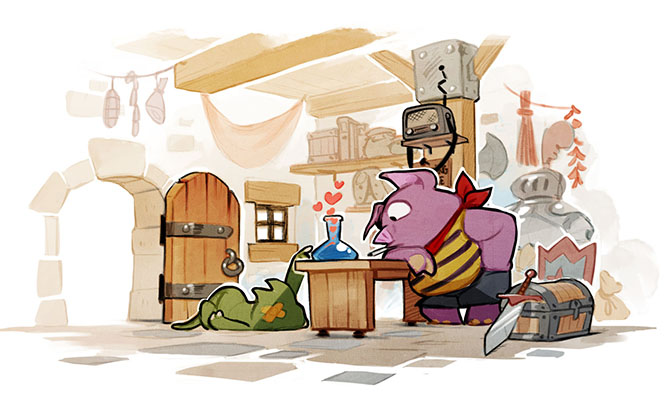 Play As Wonder Girl In Wonder Boy: The Dragon’s Trap When Wonder Boy: The Dragon’s Trap you will be able to play as Wonder Girl – the female hero who will be there with Wonder Boy. The reason for the addition is below, but to keep it short, the developers of Wonder Boy were unsure at the time if they would be able to secure licensing for Wonder Boy, so they created a female hero. Fast forward to now, they are adding in Wonder Girl because young girls may play their game, so why not let them be a female?

Great work, this is a solid addition to an already anticipated title for myself! There’s tons more information, concept sketches and more at the official blog.

We started working on our remake of The Dragon’s Trap a long time ago. Early on, when it was a 2-person bedroom project, we contacted Mr Nishizawa asking for the possibility of using their IP. At the time we were such a small team that we didn’t consider talking to Sega of Japan regarding use of the trademark, and we assumed that we could follow the route that Hudson Soft and many others went down decades ago with “Adventure Island”, “Dragon’s Curse”, which was to license the game contents but without the Wonder Boy title. It was at that time, maybe 2014, that we first considered using another title for the game, and among our early characters researchs we considered replacing the Hu-Man character with a female equivalent.

Fast-forward years later: the project has been signed by DotEmu, we’ve moved to work full-time on it, and we have obtained a license by Sega to use the beloved Wonder Boy title. Everything was moving forward like a dream!

We went back and decided that along with the classic Wonder Boy character, we would introduce a new Wonder Girl character! It is a small detail, but keeping in mind that an 8 year old girl could be playing the game today, we felt that it was the right thing to do. When you start the game you can select either character and get cursed all the same after a few minutes! Haha! And because this is a game where your hero undergoes a lot of transformations, we left the animals characters as-is. We also changed the end-game so that you can keep playing as the human character.