In my world, put quite simply, it’s that thing I always seem to do when speaking at parties. In the world of computers, especially in terms of gaming, disruption is about finding new ways to entice gamers to choose your rig rather than building their own. Better still, how to convince computer gamers to pick a laptop instead.

With two of mid-2019’s critical computer conventions having just wrapped up, the major computer manufacturers have decided that listening to the desires of gamers and knowing about their wants and needs takes precedence over staying the course. The result is everything from a gaming laptop that borrows an iconic look from Ben Stiller, to a socially-focused laptop that has a stream deck built right in, and finally, a maturing for one of gaming’s older brands. The following list is just three of the laptops announced recently that I feel have the best chance at changing the way you game.

I call this look Blue Steel

If I were talking to you at a party, and I asked you, to describe the look of a gaming laptop for me, I’m willing to bet you’d tell me that it was black with red accents. That’s kind of the way that it’s always been, and gamers haven’t questioned it much. However, we’ve seen factions come to the surface in the past few years demanding gaming laptops that look both playful and professional. ASUS’s response is similar to a look reminiscent of the squinty-eyed, stoic Blue Steel vis-a-vis Derek Zoolander. I present to you the REPUBLIC OF GAMERS (ROG) Glacier Blue line of gaming laptops. 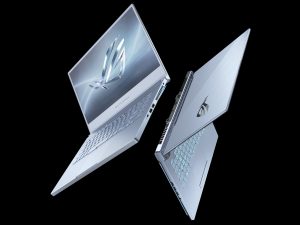 Due out later this year, some of the most well-loved ROG models (Zephyrus S GX502, Zephyrus M GU502, and Strix G G531 and G731) are getting a cooling down of sorts. Cool, crisp blue-tinted aluminum now brightens up the aforementioned devices. Not much else has changed. Each is the same Vogue magazine models you saw in a winter fashion magazine, only now they’ve got a cool new look for summer. And if you are looking at the picture and thinking to yourself “I’m not sure I like this new look. How about adding some colour for contrast?” ASUS has you covered. ROG’s legendary Aura Creator LED colour software is back with a new iteration that gives you even more colours and profiles.

The Glacier Blue ROG lineup isn’t out yet, but follow for more news.

HP came into spring conference season like that one friend we all have who was seemingly in hibernation all winter long, but somehow managed to roll into the party knowing everything that happened while they were gone — or at least acting as if they know! They’ve made it abundantly clear their goal is to make life better, to inspire, and to keep growing, which amounts to helping streamers and on-the-go gamers. HP’s Omen line is now anchored by the X 2S, which contains the most power you can put on an extra-small chassis — complete with a second extra-small screen. Your choice of NVIDIA Max-Q GeForce RTX 2070 or RTX 2080 means that there is no game currently on the market you can’t push up to 11. The Intel 9th generation i9 processor complete with Intel OPTANE implies that you’ll have enough processing power to keep up with those in-game graphics. For those still unfamiliar with Intel OPTANE, it’s a new lattice layout on the memory that boosts overall performance. Much like HP, Intel OPTANE pledges to learn what you’re using your computer for and prioritizing computer power output. I’ve been using Intel OPTANE for a month now, and I can already tell the difference in multi-tasking while I am editing audio or writing. Thanks to the new HP cooling system, you’ll do it all without spontaneous combustion (bonus points if you’re getting these references.) HP has upped its cooling game with a brand-new dual-fan and piping system that is held together with Thermal Grizzly, a newer form of liquid solder that is going claws-deep to retain its heat dispersion. 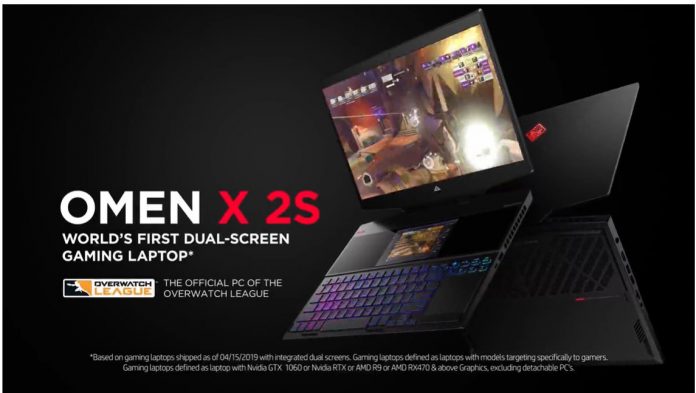 What is sure to set the X 2S apart from the pack is its 5.98-inch secondary touch screen. Hp hopes that gamers will use this added visual tool as a stream box when they are live, settings modification centre while in game,  a music controller, and however else they’d want to designate a second screen.

I’m hesitant to believe anyone other than streamers will be interested in this added touch screen. HP has a history of sticking touch screens in places where they have been less than well received. I also wish that they would change up the appearance of their Omen line because the units don’t perform like the gaming computers of five years ago, but they sure do look like them!

The X 2S is currently not available in the Canadian store. But it is on sale stateside!

Thin, for the win 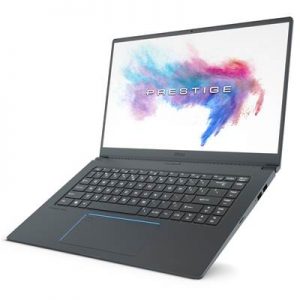 While they weren’t the inventor of the gaming laptop look, MSI has always stayed close to the quintessential looks found within the industry. However, that all changes with the PS63. To make sure that MSI was boldly going where they haven’t gone before, they partnered with the Discovery Channel on the design process. The PS63 sheds the company’s traditional black and red for an out-of-this-world space gray. Speaking of space, the reduced bezel around the 15.6-inch screen looks as if it could house entire galaxies within its 5.6mm. MSI is shedding its fiery gaming aesthetic in the hopes of appealing more to professional and modest gamers who want something that goes from the office to Summoner’s Rift. The royal red backlit dragon symbol is now stainless steel. Gone is the lighting from around the mousepad — switched out for sparkling blue-tinted aluminum that aesthetically wraps itself along the outer curves as well.

Uncharacteristically for MSI, the PS63 is a little underpowered for today’s gaming market. Intel 8th generation i7 means that you’re going to have a little less power at your fingertips. And NVIDIA Max-Q GeForce GTX 1650 or GTX 1050 means you’ll have a little less polish on your graphics. However, you don’t have to trade off on everything.

While the internals of this computer isn’t likely to disrupt the game, the power outputs likely will. MSI promises 16 hours on a single charge, which is unmatched in the gaming market. It also introduced its Prestige power adapter, which is roughly the size and weight of a MacBook adapter. The power packs of gaming computers have always been the bulkiest and heaviest around, so to find one that nearly fits in a pocket is sure to attract some attention.  The port setup also includes a Qualcomm quick charge 3.0 port that promises to give supported devices an 80% charge in just 35 minutes, which is excellent when you need a boost on the go.

These are three 2019-2020 gaming laptops that are sure to disrupt the way you play. ASUS is offering a more professional take on its already stellar ROG lineup of notebooks. HP recently said that the new OMEN lineup is meant to disrupt gamers at all levels. And their efforts are led by the mighty XS 2S, a computer with more power than anyone needs — and possibly more screen than anyone needs. MSI has long held prestige and distinction for what they’ve done in gaming. However, the PS63 is more likely to be coveted by professionals looking to work hard in the office and play hard at home. It’s not likely to turn any heads technically, but the power built into it will keep up with you all day — through work and play. If you’re asking me, any of these units will serve as a great gaming companion. But then again, I wouldn’t want to interrupt!