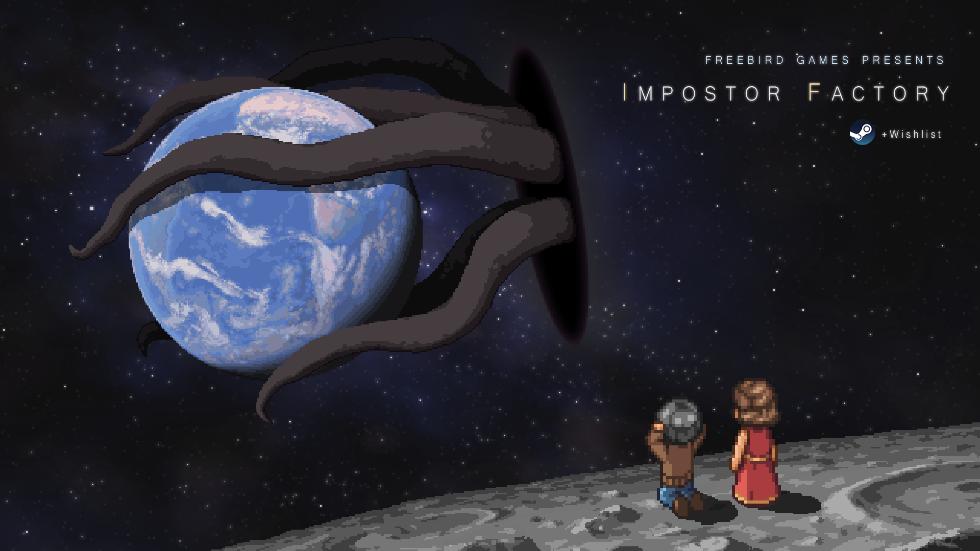 Our First Look at Imposter Factory

If you’ve played To the Moon or Finding Paradise, you’ll be happy to get your first look at Imposter Factory, the third entry from Freebird Games.

What is Imposter Factory about, let’s check out the Steam listing:

Impostor Factory is a narrative-driven adventure game that is categorically out of its mind.

Dr. Rosalene and Dr. Watts have peculiar jobs: They give people another chance to live their lives, all the way from the very beginning.

But this isn’t their story. Probably.

Instead, it’s about Quincy. Let me tell you a story about him.

One day, Quincy was invited to a fancy parteh at a suspiciously secluded mansion. So he accepted and went; because even though the mansion was suspicious and secluded, it was also fancy and had a parteh.

In fact, it turned out to be so fancy that there was a time machine in its bathroom. Quincy could wash his hands and time-travel while he was at it. Talk about a time-saver!

But of course, then people start dying, because that’s what they do. And somewhere along the way, things get a little Lovecraftian and tentacles are involved.

I’ve been waiting to hear more about Imposter Factory for some time and according to Kan Gao, the game is supposedly coming at the end of this year. I hope with everything going on in the world, that this is true. If you’ve never played a game from Freebird Games, you need to do yourself a favour and check out To the Moon.